Therapeutic effects and mechanisms of actions of Descurainia sophia

Descurainia sophia (DS) L. Webb ex Prantl belongs to the Cruciferae (Brassiaceae) family [2]. The DS plant can be found growing in temperate climate including the United States, Southern Africa, East Asia, Australia and New Zealand [2]. DS has been used in herbal medicine in China, India and many other countries around the world. It has been demonstrated that DS can regulate a variety of genes closely related to numerous biological functions [3]. About sixty-seven compounds have been isolated from DS and identified by gas chromatography-mass spectrometry [4]. However, fifty-one compounds accounted for 98% of the total amount [4]. The aerial part and seeds of DS have also found to contain several such bioactive compounds [2]. Many phytochemicals have been identified from DS (aerial parts and seeds), including unique compounds of DS (descurainin, descurainin A, descurainoside, descurainoside A, and descurainoside B) that have biological activity [4-6] (Table 1).

Many studies addressed the effect of DS in cancer, respiratory system, gastrointestinal system, and inflammatory diseases [4-6]. As evidence of pharmacological activity of DS increases, clinical uses for DS are likely to increase. Therefore, we review the use of DS herbal medicine and its mechanism of action. The known compounds of DS and their therapeutic effects are summarized in Table 2.

Despite advances in clinical medicine, the prevalence of cancer continues to rise and the disease remains the leading cause of death globally [7]. Mutations in regulatory genes involved in maintaining the balance between cell proliferation and cell death lead to rapid cell growth, cell division and invasion [8]. Conventional treatments of cancer such as chemotherapies or radiotherapies lack specificity. These therapies cannot distinguish normal cells from cancer cells, thus causing a great damage and death to both normal and cancer cells, resulting in significant adverse effects such as bone-marrow suppression, fatigue, gastrointestinal complications, loss of appetite, body-weight loss, etc., and often in significant negative effects on the health-related quality of life. In addition, such side effects may limit treatment programs and hence may affect the prognosis for patients. Ideally, anticancer-treatment strategy should specifically target cancer cells without affecting normal cells.

Many studies showed that DS possess prominent cytotoxic activity against a number of human cancer-cell lines such as lung, liver, colon, prostate, ovary, skin, and stomach [9]. DS is therefore offers an option for use in cancer therapy [9]. There are several constituents isolated from DS showed cytotoxic effects on cancer cell lines [3]. Helveticoside has been considered as the main active cytotoxic constituent of DS [10]. Quercetin also showed a potent cytotoxicity against cancer cell lines [10]. Therefore, DS herb appears to show potential for the development of an anticancer supplement.

Studies are available on the DS anti-cancer mechanism of action. It has been shown that ethanolic extract of DS seeds (EEDS) has anti-cancer activity via both suppression in cancer-cell growth and cytotoxic effect [3]. It is suggested that EEDS significantly inhibited cell growth by regulation of the genes involved in cell growth signaling [3]. EEDS can also induce apoptotic cell death in lung cancer cells [3]. The pathway of mitogen-activated protein kinase (MAPK) has been suggested to be important in the cancer invasion and growth of lung cancer [11]. EEDS has been shown to up-regulate the MAPK pathway and therefore has anti-lung cancer effects [3]. The other possible mechanism of anti-cancer effect of DC is that helveticoside act as anti-cancer agent by inhibiting Na+/K+ ATPase activity [12]. The potential of Na+/K+ ATPase inhibitors to have anti-cancer effects has been demonstrated in many cancers such as prostate, breast, lung and leukemia [13].

Tumor necrosis factor (TNF)-related apoptosis-inducing ligand (TRAIL), a member of the TNF superfamily, can selectively induce cancer-cell apoptosis through the death receptors [14]. As a cytotoxic cytokine, TRAIL selectively induces apoptosis in tumor cells through homotrimeric binding to the membrane bound death receptor 5 (DR5) [14]. This pathway recruits Fas-related death-domain proteins and activates caspase pathway. Some cancer cells are highly malignant due to their resistance to TRAIL-induced programmed cell death. The mechanisms of TRAIL resistance include reduced expression of death receptors, overexpression of inhibitor of apoptosis, and decreased release of caspases into the cytosol [14]. TRAIL resistance in cancer cells can be overcome by reversing the mechanisms of resistance, such as by upregulating death receptors [14]. TRAIL is an attractive anticancer agent because it has the ability to induce apoptosis in cancer cells while sparing most of normal cells. EEDS is an appropriate herbal addition to anticancer drugs for its beneficial effect elicited by acting on the TRAIL pathway [5]. It has been shown that in TRAIL-resistant cancer cells, DR5 are significantly up-regulated by EEDS [5]. The mechanism by which EEDS (Figure 1) up-regulates DR5 is mediated by endoplasmic reticulum stress-induced transcription factors CCAAT/enhancer-binding protein homologous protein (CHOP) [5]. By effectively upregulating death receptors, EEDS can sensitize TRAIL-refractory cancer cells [5].

DS is commonly used in traditional medicine to treat asthma and cough [4]. Consequently, DS would be expected to have therapeutic effects on the respiratory system.

Asthma is a multi-factorial disease determined by multiple factors such as genetic, epigenetic, and environmental [15]. Although there are multiple causes of asthma, airway inflammation is an important trigger factor. In recent years, epigenetic processes regulating immune cells were recognized as playing a role in mechanisms of asthma. Allergic inflammation is the main pathogenesis of allergic asthma. The type-2 cytokines such as IL-4, IL-5, and IL-13 are important in the initiation and progression of asthma [16]. The regulation of the methylation of genes related to these cytokines plays an essential role in asthma [2].

The mechanisms of therapeutic effects of DS are summarized in Figure 2. A study that examined the effects of EEDS in mouse model asthma showed that EEDS decreased infiltration of immune cells into the airways [2]. This study revealed that EEDS decrease infiltration of immune cells around the airway [2]. According to this study, EEDS decreased expression of Th2 cytokines and infiltration of inflammatory cell into the lungs [2]. The study provided a valuable insight into the anti-asthmatic effects of DS by explaining the mechanism of traditional use of DS in treating asthma [2]. The study also demonstrated that in ovalbumin (OVA)-induced asthmatic mouse model, EEDS could regulate DNA methylation and gene expression, including two functionally significant hub genes: down-regulated vascular endothelial growth factor A (Vegfa) and up-regulated proto-oncogene receptor tyrosine kinase (Kit) [2].

Another study reported that DS increased the pre-spasm time of smooth muscle induced by acetylcholine and histamine in guinea pigs [4]. Descurainoside A and descurainolide B contained in EEDS were shown to have smooth-muscle relaxation effects via the β2-adrenergic receptor/cyclic adenosine monophosphate (β2AR/cAMP) signal pathway [17]. The studies indicated that DS is beneficial in controlling asthma through regulating inflammatory processes and smooth-muscle relaxation.

The anti-inflammatory, antipyretic, analgesic and antioxidant effects of DS were assessed in many experimental studies [6, 18, 19]. Mirzaei et al. showed EEDS antioxidant effects in vitro [19]. Nimrouzi et al. suggested that DS antioxidant effect is due to free radical scavenging [6]. The antipyretic activity of DS was almost the same as that of diclofenac sodium at a dose of 400 mg/kg body weight in hyperthermic rats [18]. Decoction of DS seeds was used as an antipyretic when treating smallpox and measles [20]. The DS extract was also reported to have analgesic activity compared with paracetamol [18]. 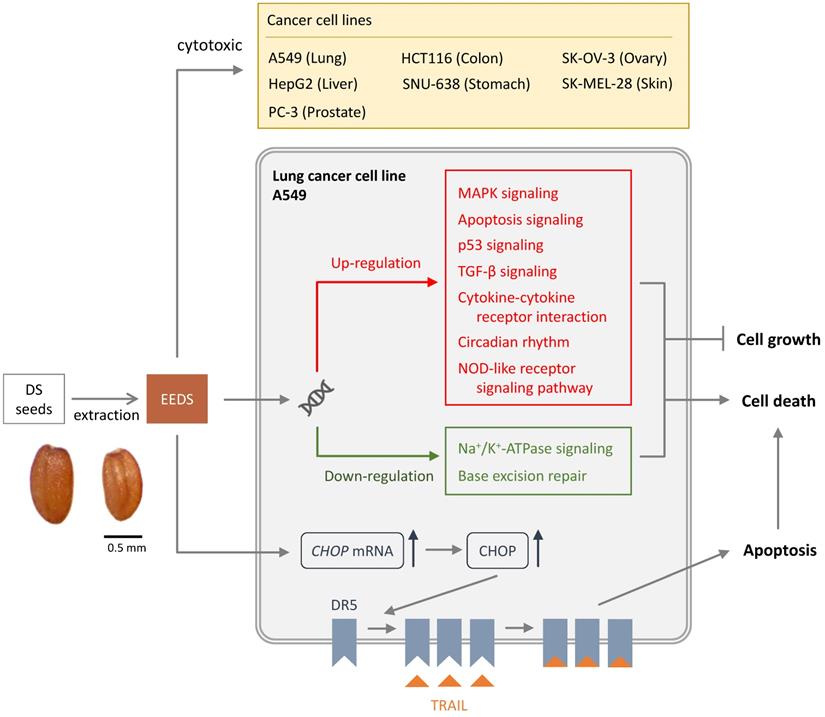 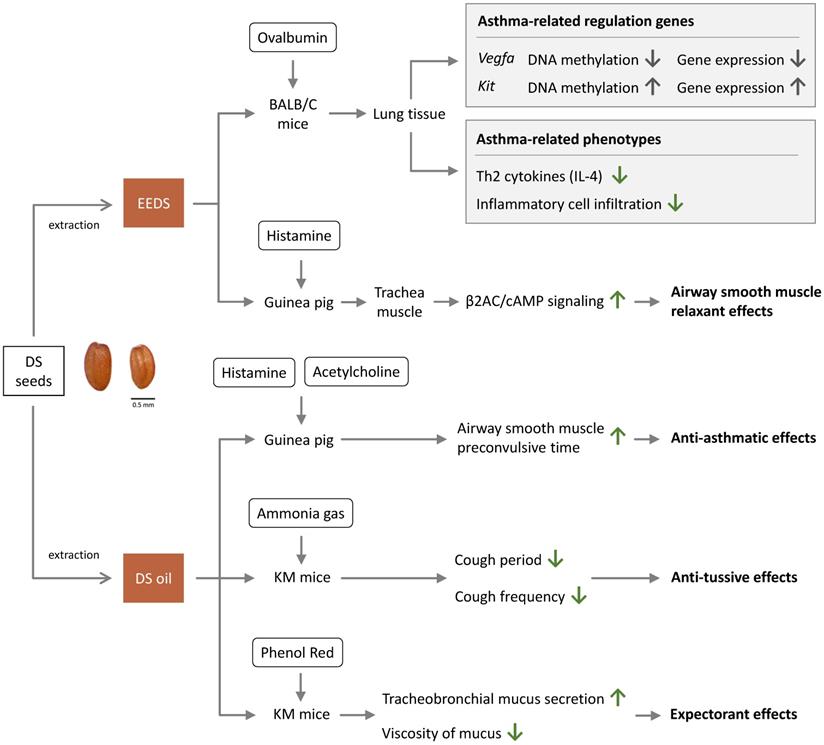 Quercetin and syringaresinol are active constituents of DS that impart it with anti-inflammatory effects [10]. The anti-inflammatory activity of DS that were prominent especially after 2 and 3 hours of intake was ascribed to coumarins [18]. Flavonoids and lignan are also DS components that inhibited nitric oxide production in lipopolysaccharides (LPS)-stimulated macrophages [10]; two compounds (quercetin and syringaresinol) were isolated from DS that exerted dose-dependent inhibitory effect on NO production in LPS-stimulated RAW264.7 cells. [10] Kim et al. identified the functional involvement of DS components with responsive genes involved in the regulation of cytokine-cytokine receptor interaction and thus displaying anti-inflammatory effects [3].

Chronic constipation is a common symptom of gastrointestinal (GI) disorders. It is estimated that 12-30% of population suffers from constipation worldwide [21]. DS is used as the initial treatment for constipation in traditional medicine in Iran [21]. DS can act via the bowel smooth-muscle relaxation and as a stool softener [6, 9, 21]. Impregnated formulations of DS seeds stimulate mucus production and absorb water from the GI lumen thus softening the stool. Allyl disulfide compound present in DS seeds are most likely acting as a smooth-muscle relaxants in the GI tract and thus promoting defecation [6, 9]. Pasalar et al. found that DS could enhance bowel movement, ease defecation, and decrease abdominal distension [22]. Therefore, DS is considered to offer an effective treatment for constipation and hemorrhoids [6]. A clinical trial showed that a 4-weeks treatment with DS is safe (no significant adverse effects being observed) and effective in treating chronic functional constipation [21].

Na+/K+ ATPase is a target for the treatment of arrhythmia and congestive heart failure (CHF) [23]. Cardiac glycosides have been used to treat heart failure and arrhythmia for many years [12]. Cardiac glycosides exert the positive inotropic effect through inhibiting Na+/K+ ATPase activity to increase intracellular sodium, followed by inhibition of the Na+/Ca2+ exchanger to increase intracellular calcium levels for strengthening the force of the heartbeat [24]. Helveticoside of DS is a cardiac glycoside and thus might have therapeutic effect in cardiac diseases [9, 12]. One previous study suggested that DS could significantly increase the urinary output in the chronic heart failure of rats based on the manifestation the diuretic effect resulted from the inhibition of renal tubular to reabsorb water, sodium, and chloride [25]. Zhou et al. showed that DS could decrease pleural effusion and pulmonary edema in critically ill patients [26]. Another study reported that DS could improve remodeling and cardiac function in chronic heart failure rats via attenuating cardiomyocyte apoptosis by regulating the balance between Bax and Bcl-2, blocking caspase cascades with the activation of PI3k/Akt/mTOR dependent signaling [27].

Since DS is used extensively in herbal medicine, it is important to address its drug-metabolizing-enzyme (DME) activities. A study assaying enzyme activity showed that EEDS is an inhibitor with a moderate effect on CYP1A2, CYP2C9, and CYP2C19 [29]. Since CYP1A2, CYP2C9, and CYP2C19 are major enzymes to many vital processes, such as metabolism of endogenous compounds and elimination of environmental toxins, it is essential to consider the dosage, duration, and interactions when using DS. Many nonsteroidal anti-inflammatory drugs (NSAID) are a substrate for CYP2C9, including celecoxib, diclofenac, ibuprofen, or naproxen. As DS seeds are clinically used in the herbal formulation for anti-inflammation or treating respiratory diseases, DS seeds and NSAID will compete to bind with CYP2C9 [29]. The substrates for CYP1A2 include amitriptyline and erlotinib. The substrates for CYP2C9 include ibuprofen, warfarin, and tamoxifen. The substrates for CYP2C19 include diazepam, mephenytoin, methadone and bortezomib [29, 30]. Clinically, the potential adverse effects of DS-drug interactions should be considered when using DS in combination with drugs that are metabolized by CYP1A2, CYP2C9, or CYP2C19 [29].

DS is considered to be a safe and effective herb and is commonly used in complementary and alternative medicine. In this review, we provided information suggesting that DS might be effective in cancer, respiratory diseases, gastrointestinal diseases, cardiac diseases, and other conditions (Figure 3). DS is rich in pharmacological constituents that could be used or developed further as therapeutic agents. While there have been many studies addressing DS' mechanisms of action, well-designed clinical trials need to be conducted to prove its clinical benefits. 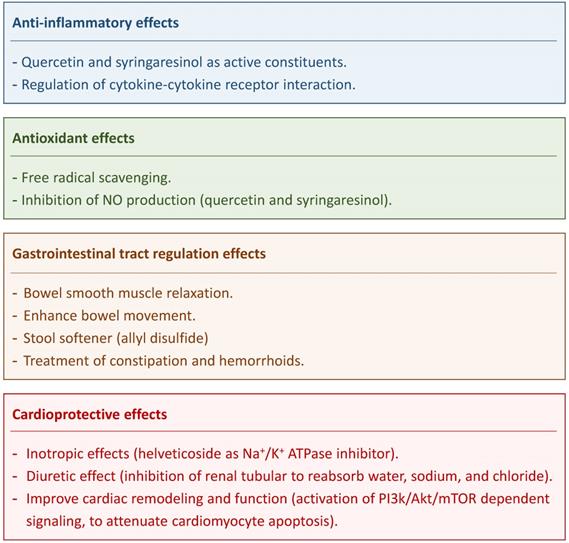 28. Maraghi S TJN. Study of in vitro and in vivo effects of Descurainia sophia extract on Hymenolepis nana in comparison with niclosamide. Hakim. 2002;5:57-62