Background: Hemorrhagic shock-induced ischemia and hypoxia elicit endoplasmic reticulum stress (ERS) that leads to cell apoptosis, tissue structural damage and organ dysfunction and failure. Stellate ganglion blockade (SGB) has been demonstrated to improve intestinal barrier dysfunction induced by hemorrhagic shock. The present study sought to investigate whether the beneficial effect of SGB on the intestinal mucosal barrier function is via suppression of ERS.

Materials and methods: A conscious rat model of hemorrhagic shock (40 ±2 mmHg for 1 hour, followed by resuscitation) was established. The parameters reflecting intestinal morphology and intestinal mucosal barrier function including wet-dry ratio (W/D), intestinal permeability, D-lactic acid (D-LA) and intestinal fatty acid binding protein (I-FABP) in plasma, and expressions of ATF6α, PERK, and IRE1α in intestinal tissues were then observed. Furthermore, the effects of either SGB or ERS inhibitor, 4-phenylbutyric acid (4-PBA), on these parameters in rats with hemorrhagic shock were assessed. The effect of ERS agonist tunicamycin (TM) on the rats subjected with both SGB and hemorrhagic shock was also determined.

Thirty-six male Wistar rats were purchased from Sibef Biotechnology Co., Ltd (Beijing, China). The animals were housed in SPF environment. All surgery procedures were approved by the Animal ethics committee of Hebei North University. All animal were then subjected to hemorrhagic shock or sham operation at 4-5 months of ages, weighing 300±20 g.

The rats were divided into the Sham, Shock, Sham+SGB, Shock+SGB, Shock+4-phenylbutyric acid (4-PBA) (Shock plus 4-PBA treatment), and Shock+SGB+tunicamycin (TM) (Shock+SGB plus TM administration) groups, with n=6 for each group. According to the methods in our lab [5], right SGB was performed before hemorrhagic shock. In the SGB group, 0.25% ropivacaine hydrochloride (AstraZeneca AB, Sweden 2018-05 2021-04 LBKT) in 0.2 mL saline was injected into the body surface landmarks of the right stellate ganglion after isoflurane inhalation anesthesia, and the rats were naturally awakened to observe whether there was Horner syndrome. Rats without SGB were administered with an equal volume of physiological saline. Then, the hemorrhagic shock was induced in the Shock, Shock+SGB, Shock+4-PBA and Shock+SGB+TM groups. In the Sham and Sham+SGB groups, same operation was performed without hemorrhage and resuscitation. In addition, subcutaneous injections of 4-PBA (5 μg/kg, Merck KGaA, Darmstadt, Germany) or TM (2 mg/kg, ApexBio, Texas, USA) were performed at the same time of fluid resuscitation in the Shock+4-PBA or Shock+SGB+TM groups, respectively.

Rats received inhalation anesthesia of isoflurane (Shenzhen Ruiwald Life Technology Co., Ltd., Shenzhen, China) using the inhalation anesthesia machine for small animals (MATRX VMR, Midmark Corporation, Dayton, Ohio), and underwent femoral surgery for hemorrhagic shock. Briefly, bilateral femoral artery and vein were separated and intubated into the femoral artery and vein respectively. Then, the intubation was drawn from the middle of the two shoulder blades of the neck through the subcutaneous tunnel of the back, and the tube was sealed with heparin after fixation. The right femoral artery was cannulated to monitor the mean arterial pressure (MAP) using the PowerLab biological signal acquisition system (ADInstruments, Bella Vista NSW, Australia), and the left femoral artery was intubated for blood withdrawal. After all the operations, the inhalation anesthesia was relieved for natural awake within 1 to 3 minutes. Then, after a 20-min stabilized phase, blood was withdrawn and MAP reached 40±2 mmHg within 10 minutes, which was maintained at this level for 60 minutes through pumping or infusing the withdrawal blood as required using the automatic withdrawal-infusion machine (NE-1000, New Era Pump Systems Inc., Farmingdale, NY). During the hypotension, the shed blood stored in a 20 ml-syringe connected automatic withdrawal-infusion machine, at room temperature. After 1 hour of hypotension, intravenous infusion of the shed whole blood plus an equal volume of Ringer's solution was carried out within 30 minutes for resuscitation.

After resuscitation for 3 hours in hemorrhagic shocked rats or corresponding time points in sham operation rats, the rats received inhalation anesthesia of isoflurane and general anesthesia with 1% pentobarbital sodium (50 mg/kg, Merck, Germany). Then, inferior vena cava blood was harvested and centrifuged at 3000 rpm for 10 minutes. The D-LA and I-FABP levels in the plasma were detected using the rat-specific enzyme-linked immunosorbent assay kits (Wuhan Pure Biology Co., Ltd. HuBei, China) as the manufacturer's protocols.

The intestinal sac was turned over and ligated with 4 # thread at the end, and the other end was ligated after the injection of 0.3 ml's KH solution. Then, the overturned segment of the intestine was incubate in KH solution containing the fluorescein isothiocyanate-dextran 4 (FD4, Sigma) with a concentration of 25 mg/ml for 30 minutes, maintain the temperature at 37 °C, and continuously fill with a mixture of 95% oxygen and 5% carbon dioxide. The intestinal solution was centrifuged at 1000 g for 10 minutes at 4 °C, and the supernatant (100 μL) was added to the 900 μL of PBS. The fluorescence intensity of FD4 in mixed liquid was measured with microplate reader (SpectraMax M3, Molecular Devices, San Jose, CA). The concentration of FD4 in intestinal sac was calculated according to this standard curve (y=0.0095x+0.4011, R²=0.9939). Then, the permeability of intestinal sac to FD4 was calculated with the formula as follows, which was used to evaluate the intestinal permeability.

The fresh intestinal samples were washed with cold saline and preserved in 4% paraformaldehyde for 24 hours. Subsequently, they were dehydrated through gradient dehydration and paraffin embedding. Sections (4 μm) were cut with a microtome RM2235 (Leica Microsystems GmbH, Wetzlar, Germany) and stained with hematoxylin/eosin for histopathological evaluation, three sections from each animal. Images were acquired using an Olympus BH-2 microscope (Japan). As previous report [7], the intestinal structure was observed for the measurement of intestinal villus height and thickness of sub mucosa and muscular layer. Degrees of structural injury in intestinal tissues were analyzed.

All statistical analyses were performed using SPSS software. All data were expressed as mean ± SEM. One-way analysis of variance (ANOVA) was used to determine the significance of the differences between groups, followed by LSD test as a post hoc test for multiple comparisons. P<0.05 was considered as statistically significance.

Changes of MAP in rats after hemorrhagic shock

Shock and Shock+SGB groups showed short, irregular and fractured intestinal villus and obvious morphologic damage compared with the Sham and Sham+SGB groups. Furthermore, the injury of intestinal structure in Shock+SGB+TM group was more serious than that in the Shock+SGB group (Figure 2A). 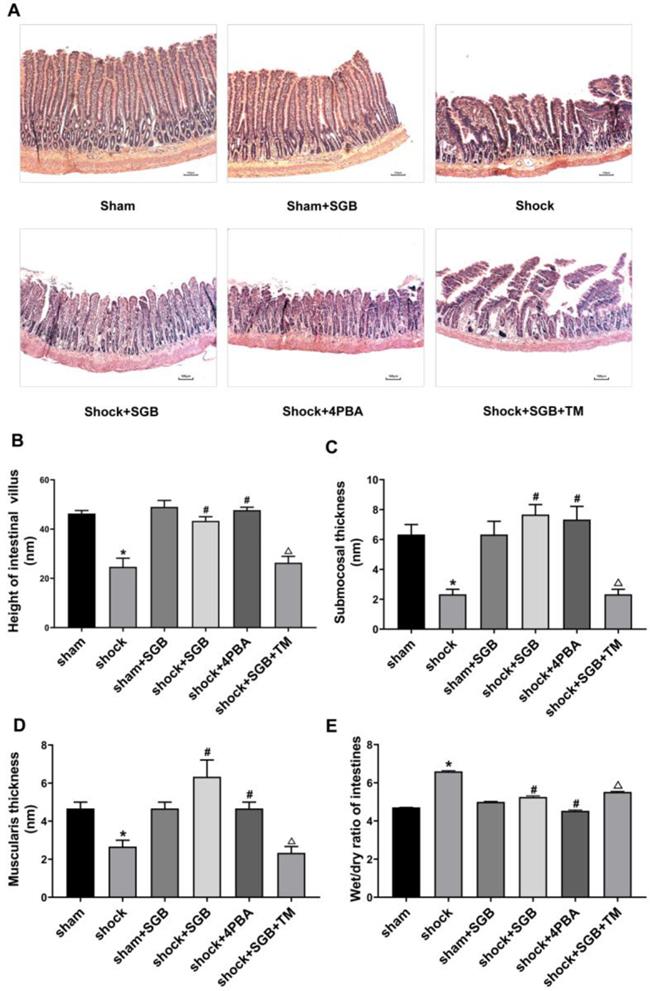 Role of ERS in SGB alleviating hemorrhagic shock induced-intestinal barrier dysfunction in rats. (A-B) Levels of D-lactic acid (D-LA) and intestinal fatty acid binding protein (I-FABP) in plasma; (C) Intestinal clearance of fluorescein isothiocyanate-dextran (FD4) in rats. Data are presented as mean ± SEM, with n = 6 for each group. The analysis of ANOVA showed that there was statistical difference among these six groups, followed by LSD test as follows: * P < 0.05 vs. the Sham group, #P < 0.05 vs. the Shock group, ΔP < 0.05 vs. the Shock+SGB group.

SGB reduced expressions of ATF6α, PERK and IRE1α in intestinal tissue in rats after hemorrhagic shock. Data are presented as mean ± SEM, with n = 3 for each group. The analysis of ANOVA showed that there was statistical difference among these six groups, followed by LSD test as follows: *P < 0.05 vs. the Sham group, #P < 0.05 vs. the Shock group, ΔP < 0.05 vs. the Shock+SGB group.

Studies [13] have shown that ischemia and hypoxia cause energy metabolism disorder, calcium overload and free radical production in tissue cells after hemorrhagic shock. Misfolded and unfolded proteins gradually accumulate in the endoplasmic reticulum, resulting in endoplasmic reticulum dysfunction and ERS. At the same time, ERS also triggers unfolded protein response (UPR) to restore endoplasmic reticulum homeostasis through three endoplasmic reticulum transmembrane sensors such as ATF6α, IRE1α and PERK [14]. When UPR is dysfunctional, the hyper secretory cells in the small intestine, such as Paneth cells and goblet cells, are particularly prone to abnormalities and high expression of UPR-related genes [15]. Recent study [16] has shown that excessive ERS and the impairment of UPR signal transduction cause inflammatory bowel disease mainly through reduction of intestinal epithelial cell apoptosis and excessive inflammatory response.

In this study, we used the model of conscious hemorrhagic shock. The advantage of this model is that the operation was performed under inhalation anesthesia, and the animals were naturally awakened. Because the animals lose blood in the conscious state, this model is more likely to mimic the acute blood loss in human. Moreover, the current finding that SGB improved the intestinal mucosal barrier in conscious rats with hemorrhagic shock is consistent with the results of acute blood loss in anesthetized rats [5] which advances the experimental method in studying the hemorrhagic shock in conscious animals.

Interestingly, in the present study, SGB, 4-PBA or TM treatments did not affect the MAP in rats following hemorrhagic shock. The results suggest that SGB treatment does not affect the benign stress on the blood pressure during acute hemorrhage, which may be beneficial for ensuring the blood perfusion of vital organs and for further expanding its clinical application. These results also indicate that the favorable effect of SGB may be unrelated to MAP recovery, and the related mechanism of SGB action needs to be investigated in the future.

In summary, either SGB or ERS inhibitor 4-PBA reduced intestinal injury, improved intestinal permeability and decreased the expressions of ATF6α, IRE1α and PERK in hemorrhagic shock rats. The beneficial role of SGB was abolished by ERS specific agonist TM. These findings indicate that SGB attenuates intestinal mucosal barrier injury induced by hemorrhagic shock through inhibiting ERS. This study provides new evidence for expanding the clinical application of SGB, and may represent new therapeutic strategy for the prevention and treatment of intestinal mucosal injury after shock.

The authors greatly appreciate and thank Dr. Xue Bao-Jian (Department of Psychological and Brain Sciences, University of Iowa, Iowa, USA) for reviewing and revising the manuscript.

M.Y., Z.L., C.W., Y.L., H.Z., H.D., and Z.Z., performed the majority of the animal experiment and laboratory work; M.Y., acquired and analyzed the data; C.N., and Z.Z., were involved in the conception and design of the study, data interpretation, and critically revised the manuscript.

No benefits in any form have been received or will be received from a commercial association related directly or indirectly to the subject of this article. The authors report no conflicts of interest. The authors alone are responsible for the content and writing of the paper.