Introduction: The aim of this retrospective study was to analyze the long-term outcomes and factors associated with treatment failure of Gamma Knife radiosurgery (GKRS) for postsurgical residual or recurrent nonfunctioning pituitary adenomas (NFPAs).

Conclusion: In this study, GKRS can offer a high tumor control rate as well as a low rate of complications in postsurgical residual or recurrent NFPA patients.

Nonfunctioning pituitary adenomas (NFPAs) do not secrete biologically active hormones and represent almost 30% of pituitary tumors [1]. Usually, NFPAs may be detected because of clinical signs and symptoms such as headache, visual impairment and hypopituitarism, which are attributed to tumor compression. Transsphenoidal resection with minimal postoperative complications is widely recommended as the first-line treatment for NFPAs, especially for large tumors. Nevertheless, the incidence of recurrent tumor was reported to be 10%-20% following gross-total transsphenoidal resection for nonfunctioning macroadenomas [2-6]. The tumor progression following subtotal resection without adjuvant therapy ranged from 50% to 60% [2-5]. Under this circumstance, further management is generally required for residual or recurrent NFPA patients after surgical resection. GKRS has been applied in the treatment of NFPAs for decades which can provide a 10-year tumor control rate of 83%-92% as well as a low rate of hypopituitarism, varying from 9% to 32% [7-15]. There are more than 26 years of experience using Gamma Knife (Elekta, Stockholm, Sweden) at the Second Affiliated Hospital of Guangzhou Medical University since 1993. To investigate the long-term outcomes and factors associated with treatment failure of GKRS for postsurgical residual or recurrent NFPA patients, we performed a single-center retrospective study.

All patients were followed up with magnetic resonance (MR) imaging of the sellar, clinical and endocrinological evaluations. The follow-up evaluations were reviewed by clinicians and radiologists.

Tumor dimensions were obtained manually from MR imaging in the axial, sagittal, and coronal planes. The dimensional indices of the tumors were measured and recorded in 3 orthogonal planes: transverse (TR), anteroposterior (AP), and craniocaudal (CC). The tumor volumes were estimated using the following formula: V = (π × [TR × AP × CC])/6 [16]. Unfortunately, all of the digital data from model B Leksell Gamma Knife (from 1993 to 2014) in Gamma plan was missing. So, tumor volumes were calculated based on the measurement of tumor diameters. Taking into account the irregular shape of postsurgical residual or recurrent pituitary adenomas, tumor volume measurement was only a rough estimate of the actual volume. Tumor progression was defined as tumor enlargement at least 20% in tumor volume or tumor regrowth. Tumor shrinkage was defined by at least 20% shrinkage in tumor volume. Stable tumor was defined as tumor volume change within 20%. Parasellar invasion was defined as the Knosp grade 3 or 4. Suprasellar extension was defined as the tumor close to the optic nerve and chiasm (< 2 mm).

Endocrinological evaluations included measurements of cortisol, adrenocorticotropic hormone (ACTH), prolactin (PRL), growth hormone (GH), insulin-like growth factor-1 (IGF-1), thyrotropin-stimulating hormone (TSH), free triiodothyronine (FT3), free thyroxine (FT4), luteinizing hormone (LH), follicle-stimulating hormone (FSH), testosterone in men and estradiol levels in premenopausal women. New hypopituitarism was defined by requiring hormone replacement or a new deficiency in any one of the hormonal axes after GKRS. TSH deficiency was based on low FT4 (Normal Range: 12.00-22.00 pmol/L) with a low, normal or mildly elevated TSH. ACTH deficiency was defined as morning cortisol (08:00) level was <100 nmol/L. If morning cortisol level was >400nmol/L, ACTH deficiency was excluded. If morning cortisol ≥100 nmol/L and <400nmol/L, a stimulation test was used to confirm ACTH deficiency. Gonadotrophin deficiency in males was defined by low serum testosterone levels (Normal Range: 0.18-0.78 nmol/L) without elevated LH and FSH levels. Gonadotrophin deficiency in females was defined by amenorrhea with low serum estradiol and low gonadotrophins in premenopausal females, and the absence of high gonadotrophins (LH and FSH) in menopausal women. GH deficiency was based on a low age- and sex-adjusted IGF-1 or an insufficient rise in GH levels during a stimulation test. As many patients were from long distances and had poor compliance, some patients did not routinely follow up with endocrine evaluation and dynamic testing.

Model B Leksell Gamma Knife Unit was performed from 1993 to 2014 and Perfexion Unit (Elekta Instrument, Inc.) thereafter. Thin-slice stereotactic MR imaging with contrast was performed with axial and coronal images through the sella following stereotactic Leksell frame placement. Subsequently, the planning of GKRS treatment was made in consultation with a medical physicist, radiation oncologist and neurosurgeon. The prescribed dose was adjusted depending on tumor volume, distance to the optic nerve and chiasm, and history of previous radiotherapy. The maximal dose to the optic nerve and chiasm was restricted to 9 Gy, and to the lateral wall of the cavernous sinus was restricted to 15 Gy. Small collimators of 4 mm and 8 mm were mainly adopted to achieve better GKRS treatment plan conformality.

Kaplan-Meier curve of progression-free survival for the entire series. 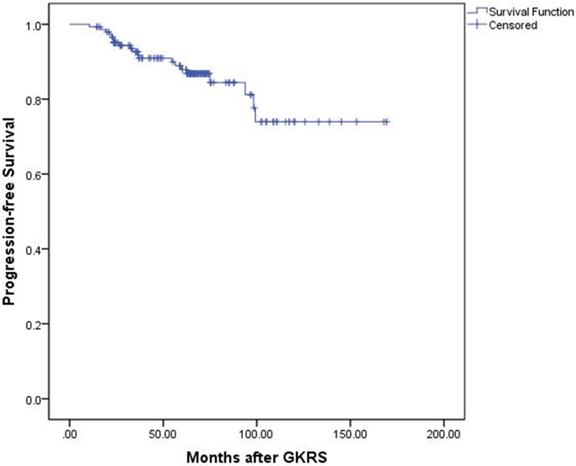 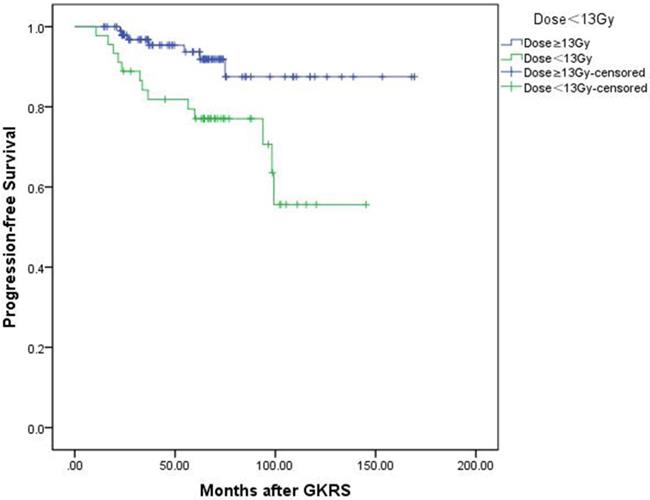 In univariate and multivariate analysis, there were no factors significantly associated with new hypopituitarism (Table 3).

NFPAs are often detected due to symptoms and clinical signs. Transsphenoidal surgical resection with minimal complications is the recommended first-line treatment for most symptomatic patients. It has the advantages of rapid decompression of surrounding structures and pathological analysis. However, for tumors with suprasellar extension and parasellar invasion, complete surgical resection may be difficult to achieve (46%-75% of all surgical patients) [6, 17, 18]. The incidence of recurrent tumor after gross total resection occurred in 10%-20% of cases [2-6]. For patients following subtotal resection without adjuvant therapy, the rate of tumor progression ranged from 50% to 60% [2-5]. In a series of 126 postsurgical residual NFPA patients, Gittoe et al [19] reported progression free survival rates of 93% at 5, 10 and 15 years for patients with residual NFPAs treated with RT after surgery, and 68%, 47% and 33% for those patients with observation, respectively. Other studies [2, 20] also reported similar results. Given the high rate of recurrent or residual NFPAs after surgical resection and tumor progression after surgery without radiotherapy, further management is generally required.

Radiation techniques have developed from 3D conformal radiotherapy (3D-CRT) to stereotactic radiosurgery (SRS) or fractionated stereotactic radiotherapy (FSRT). In previous studies of postsurgical conventional radiotherapy for NFPAs, tumor control rates were 80-90% at 10 years and 75-90% at 20 years with doses ranging from 45 to 55 Gy at 1.8-2.0 Gy per fraction [21]. The hypopituitarism occurred in 20% to 30% at 5 years after conventional radiotherapy[21]. SRS or FSRT which has advantages of precise tumor localization and a better dose conformity than conventional radiotherapy is the most commonly used radiation techniques and essential part in the treatment of pituitary adenomas. As GKRS is still considered the gold standard of SRS, GKRS is the most reported in literatures. For FSRT, tumor control rate was around 95% at 5 years and new hypopituitarism was reported in 10% to 48% in NFPA patients with doses ranging from 45-54 Gy at 1.8-2.0 Gy per fraction [21]. GKRS has been proved to offer a high tumor control rate of 83%-92% and a low rate of 9%-32% of new hypopituitarism for pituitary adenomas [8, 9, 11, 14, 22, 23]. Tumor local control and complications were similar between GKRS and FSRT. However, the superiority of GKRS over FSRT for NFPA patients according to tumor control and complications has yet to be defined.

Kaplan-Meier curve of proportion with new hypopituitarism for the entire series. 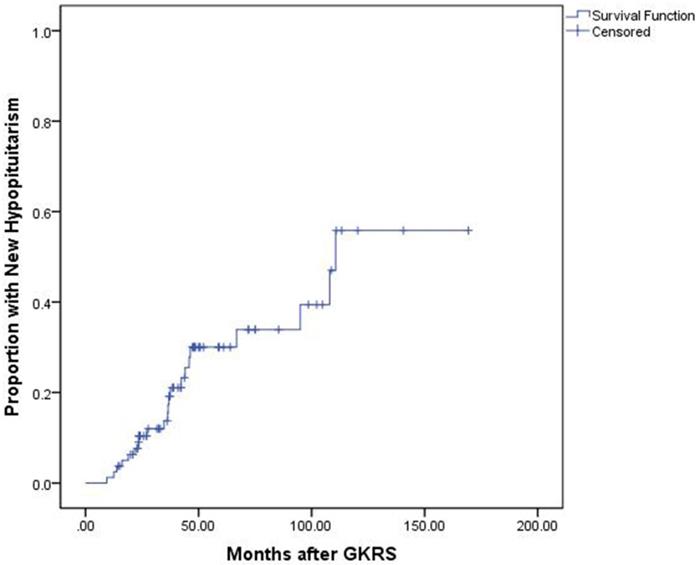 The effect of timing of radiosurgery for residual or recurrent NFPAs had been discussed in previous reports. Pomeraniec et al. [24] conducted a multicenter retrospective study to evaluate the effect of timing of radiosurgery on outcomes. In this study, early GKRS (≤6 months after resection) was related with a lower risk of radiological progression compared with delayed radiosurgery (>6 months after resection). What's more, the rate of delayed endocrinopathy was not related to the timing of radiosurgery. In the study of Sadik et al. [25], adjuvant radiosurgery (≤6 months after surgery) also provided similar tumor control rate with delayed GKRS, but there was a trend that adjuvant GKRS may provide a fewer endocrinologic deficits. It seemed that early GKRS should be used for residual NFPAs after surgery. In the current study, the timing of GKRS (≤6 months after surgery versus >6 months after surgery) was not associated with tumor progression (p=0.516) and new hypopituitarism (p=0.336). Tumor characteristic (residual VS recurrent) was not related with tumor progression (p=0.695) and new hypopituitarism (p=0.963). As a delayed GKRS for postsurgical residual NFPAs would increase the risk of tumor regrowth and visual dysfunction, we suggested early GKRS should be used after surgical resection.

The incidence of neurological complications such as visual impairment and cranial nerve dysfunction were relatively low after GKRS, which was reported to be between 0% and 5% [11, 23, 26]. In this study, six patients (4.1%) developed new or worsening visual dysfunction. Four patients (2.7%) developed new or worsening cranial neuropathy. Visual dysfunction and cranial nerve dysfunction within the cavernous sinus could be caused by compression and radiation damage, especially in patients with suprasellar invasion and parasellar extension. The optic pathway was generally restricted to <8 Gy in GKRS [28]. That may sacrifice radiation dose to the tumor near the optic pathway. The dose of up to 40 Gy appears to be a relatively safe to the cranial nerves of the cavernous sinus [28].

In this study, some limitations should be noted. First, this was a retrospective study and therefore contained information and selection biases. Second, taking into account the irregular shape of postsurgical residual or recurrent pituitary adenomas, tumor volume measurement was only a rough estimate of the actual volume. Third, as some patients were from long distances and had poor compliance, many patients did not routinely follow up with endocrine evaluations; only 80 patients (54.1%) with complete endocrine evaluations before and after GKRS were analyzed for new hypopituitarism, the small number of cases may limit statistical power. Four, although all patients were histologically confirmed as NFPAs, there was a lack of pathological markers of aggressive behavior, which may be associated with tumor regrowth. Finally, given the lack of IGF-1 or a stimulation test in some patients followed up in rural area, GH deficiency may be under estimated.

Each author contributed important content during manuscript drafting or revision and accepts accountability for the overall work, and all the authors agreed on the final manuscript.

19. Gittoes NJ. Radiotherapy for non-functioning pituitary tumors-when and under what circumstances?. Pituitary. 2003;6:103-8