Triple-Negative Breast Cancer (TNBC) is a most dangerous breast cancer subtype. The naturally occurring sesquiterpene lactone, arnicolide D (AD), has proven effective against a variety of tumors, however, the inhibitory effects of AD against TNBC and the underlying mechanisms remain unclear. In the present study, two TNBC cell lines (MDA-MB-231 and MDA-MB-468) and an MDA-MB-231 xenograft mouse model were employed to investigate the anti-TNBC effects of AD in vitro and in vivo. Cell viability was assessed by MTT assay. Cell cycle arrest and apoptosis were analyzed by flow cytometry. Protein levels were determined by immunoblotting. In vitro studies demonstrated that AD significantly decreased cell viability, and induced G2/M cell cycle arrest and apoptosis. In vivo assays showed that oral administration of 25 or 50 mg/kg AD for 22 days led to a reduction of tumor weights by 24.7% or 41.0%, without appreciable side effects. Mechanistically, AD inhibited the activation of Akt/mTOR and STAT3 signaling pathways. Based on our findings, AD is a promising candidate for development as an adjunctive therapeutic drug for TNBC.

Breast cancer is the most common malignancy in women worldwide. According to the World Health Organization International Agency for Research on Cancer, there were approximately 2.1 million newly diagnosed female breast cancer cases in 2018, accounting for around 25% cancer cases among women worldwide [1]. Triple-Negative Breast Cancer (TNBC) is characterized by a lack of the estrogen receptor (ER), progesterone receptor (PR) and human epidermal growth receptor 2 (HER-2) that are commonly found in breast cancer, and accounts for approximately 15% - 20% of all breast cancer cases [2]. TNBC tumors do not respond to endocrine or anti-HER2 therapies, and the systemic treatment is limited to cytotoxic chemotherapy [3]. Furthermore, TNBC is associated with a high risk of relapse and metastasis, short progression-free survival, and a lower overall survival when compared to other breast cancer subtypes [4]. Therefore, novel therapeutic drugs are necessary to combat TNBC.

Natural products are an important source of drugs due to their abundance and high chemical structural diversity. Increasing amounts of research have shown that a variety of natural products can suppress proliferation of TNBC cells by blocking the cell cycle, inducing apoptosis, and inhibiting angiogenesis and migration [5-8]. Thus, natural products are attracting increasing amounts of attention from researchers in the cancer field. Arnicolide D (AD) (Figure 1), a natural sesquiterpene lactone extracted from Centipeda minima [9], has been reported to exhibit anti-bacterial [9] and anti-cancer effects, in cancers including colon carcinoma [10], melanoma [11], and nasopharyngeal carcinoma [12]. However, there have been no reports on the effects of AD in TNBC. In this study, we aimed to investigate the anti-cancer effects of AD in TNBC. In addition, the underlying molecular mechanisms were also explored. 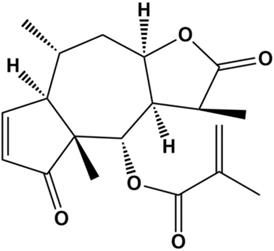 To investigate the inhibitory effects of AD on breast cancer cell viability, 5×103 (MDA-MB-231 and MCF-7) or 1×104 (MDA-MB-468) cells were seeded into a 96-well plate and incubated for 24 h. Cells were then exposed to different concentrations of AD for 24, 48 or 72 h. Cells without treatment were used as a control. Cell viability was measured using MTT (Sigma-Aldrich), following manufacturer's protocols. IC50 values of AD were used to evaluate the in vitro anti-cancer cytotoxicity.

Briefly, the cells were treated with AD for 24 h. Following washes with PBS, cells were fixed with 4% paraformaldehyde, stained with Hoechst 33342 for 15 min at room temperature, and then examined by fluorescence microscopy (Nikon, Tokyo, Japan).

Cell migration was evaluated by wound-healing assay. MDA-MB-231 cells (4×104 cells/well) were seeded into 35 mm high μ-dishes with culture inserts (ibidi, Germany). Following removal of culture inserts and washes with medium, cells were treated with various concentrations of AD, or batimastat (Aladdin, Shanghai, China) as a positive control. Migration of cells into the wound area was photographed under a microscope at 0, 6, 12, 24 and 48 h time points. The scratch open area was calculated using ImageJ software.

Mice were inoculated with MDA-MB-231 cells (5×106) in the fourth mammary fat pad. After two weeks inoculation, the average tumor volume reach to 70 mm3, mice were randomly divided into four groups (6 mice per group), and treated by oral gavage with 25 or 50 mg/kg/day of AD, or an equivalent amount of solvent (0.5% CMCNa, 1% Tween-80, 10 mL/kg) as a negative control (vehicle group). A positive control group received 10 mg/kg of docetaxel once a week by intraperitoneal (i.p.) injection. Body weight and tumor size were measured every two or three days during the experimental period. Tumor size was monitored using calipers and tumor volumes were calculated using the formula volume = (length × width2)/2. Treatment duration was 22 days, and the average tumor volume of the vehicle group reached 800 mm3 during that time. At the experimental endpoint, all mice were sacrificed and their tumors and vital organs were harvested and weighed.

All data are presented as means ± SEM and analysed using one-way analysis of variance (ANOVA) followed by LSD post hoc or Dunnett's tests. Differences were considered to be statistically significant at P < 0.05.

AD induced cell cycle arrest in TNBC. (A) MDA-MB-231 and (B) MDA-MB-468 cells were stained with PI and the cell cycle analyzed by flow cytometry. 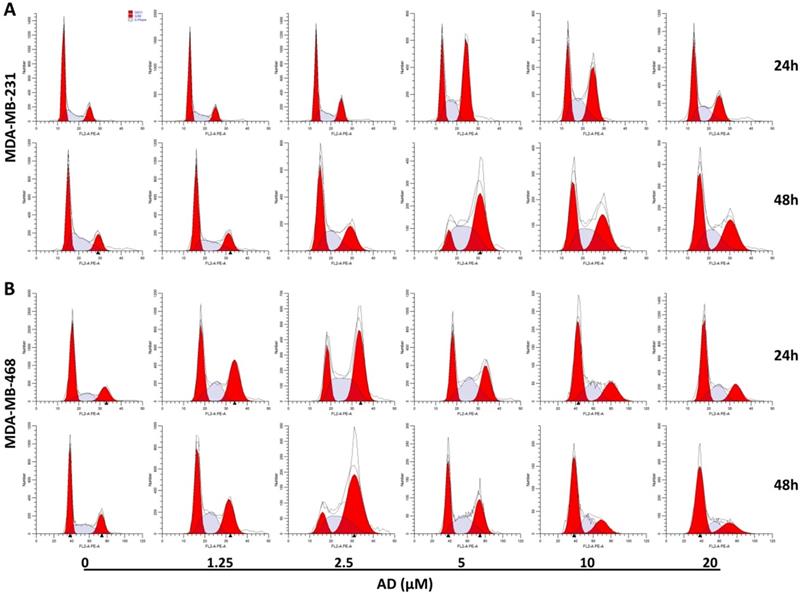 To elucidate the underlying mechanisms of AD-induced inhibition, cell-cycle distribution patterns were analysed using flow cytometry in MDA-MB-231 and MDA-MB-468. As shown in Figure 3A, the proportion of MDA-MB-231 cells in the G2/M phase was significantly increased after 5 μM AD treatment for both 24 and 48 h, whereas higher doses of AD exhibited weaker inhibition of the cell cycle. Similarly, AD significantly increased MDA-MB-468 cell cycle arrest at the G2/M phase at a concentration of 2.5 μM (Figure 3B). These results suggested that the anti-proliferative effect of AD may be through cell cycle arrest, combined with other mechanisms at higher doses.

To observe changes in the nuclear morphology of MDA-MB-231 and MDA-MB-468 cells, cells were photographed under an inverted fluorescence microscope after staining with Hoechst 33342. As shown in Figure 5, distinct chromatin condensation and formation of apoptotic bodies was observed after 24 h treatment of AD.

Due to the highly invasive characteristic of TNBC, using the wound-healing assay, we investigated the inhibitive efficacy of AD on invasion in MDA-MB-231 cells. Results demonstrated that AD significantly suppressed cell migration at doses of 2.5, 5, and 10 μM after 24 and 48 h of treatment (Figure 6).

Activation of the PI3K/Akt/mTOR signaling pathway plays a significant role in controlling cell growth, proliferation and metastasis, and has been identified as an important potential therapeutic target in breast cancer [13]. Therefore, we examined the key proteins of this pathway in MDA-MB-231 cells. As shown in Figure 7, AD significantly inhibited the expression of Akt and mTOR, as well as their phosphorylated forms. These data indicated that AD has a direct inhibitory effect on the PI3K/Akt/mTOR pathway.

AD induced apoptosis in TNBC. (A) MDA-MB-231 and (B) MDA-MB-468 were treated with AD, stained with AnnexinV-FITC/PI, and cell apoptosis analyzed by flow cytometry. 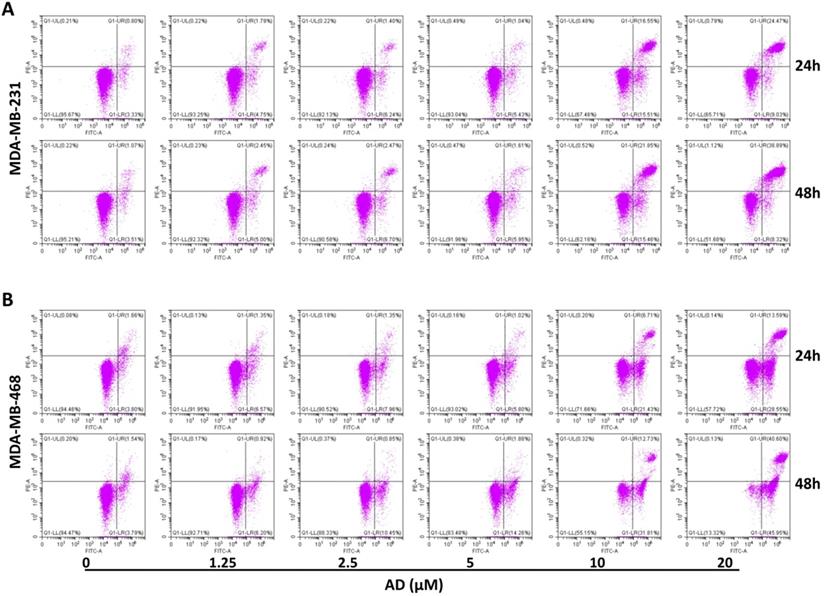 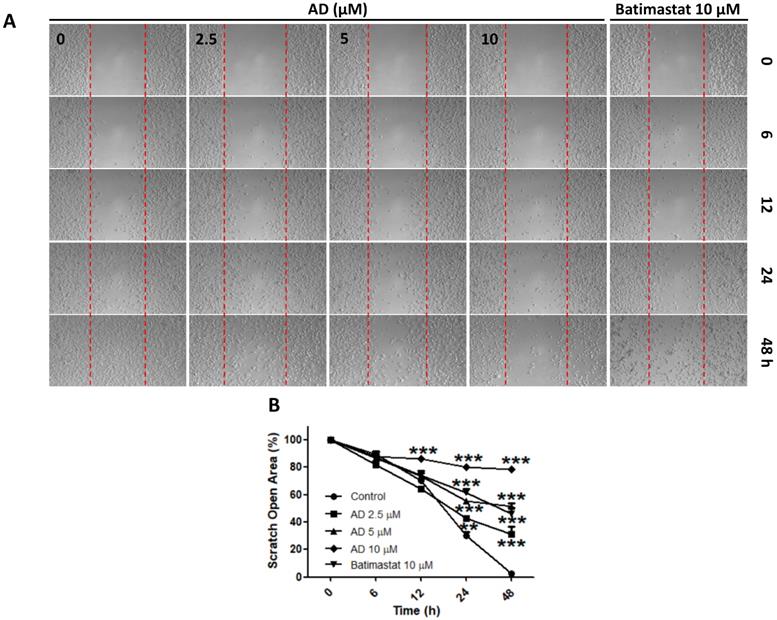 AD inhibited Akt/mTOR signaling in TNBC cells. MDA-MB-231 cells were treated with AD for 24 or 48 h, collected and immunoblotted with the indicated antibodies. β-actin was used as an internal control. 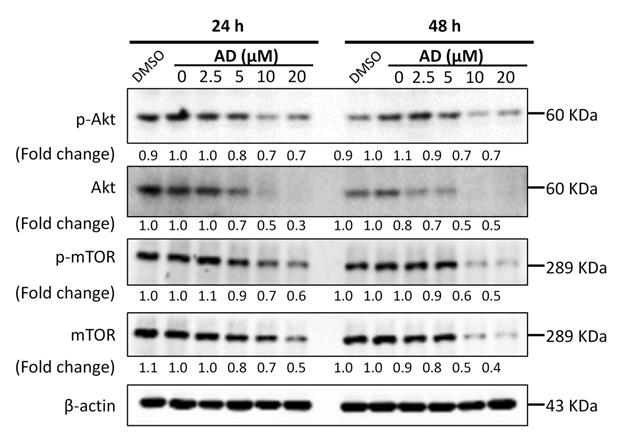 AD inhibited STAT3 signaling in TNBC cells. MDA-MB-231 cells were treated with AD for 24 or 48 h, collected and immunoblotted with the indicated antibodies. β-actin was used as an internal control.

STAT3 is an important transcription factor. Its overexpression and constitutive activation play a key role in the progression, proliferation and metastasis of breast cancer [14]. Therefore, expression levels of STAT3 and p-STAT3 were examined by Western-blotting after AD treatment. As shown in Figure 8, AD significantly downregulated the expression of STAT3 and p-STAT3 in a dose-dependent manner in MDA-MB-231 cells.

To assess the changes in tumor morphology, the tumor sections were stained with H&E. Similar to the docetaxel-treated group, the density of tumor cells in AD-treated group were notably decreased when compared to the vehicle group (Figure 10). We then further, examined the expression of cell proliferation marker Ki67. As shown in Figure 10, AD inhibited the expression of Ki67 when compared to the vehicle group. The above results indicated that AD exhibited in vivo anti-TNBC effects.

TNBC exhibits a more aggressive phenotype and poorer prognosis than other breast cancer subtypes [4]. Natural products are a rich source for drug discovery of compounds to combat TNBC. In this study, we demonstrated that AD suppressed TNBC growth, in vitro and in vivo. AD exhibited inhibitory effects on the TNBC cell lines MDA-MB-231 and MDA-MB-468, and with a higher efficacy than in the non-TNBC cell line MCF7. Furthermore, oral administration of AD effectively inhibited xenograft tumor growth in vivo without apparent side effects.

The PI3K/AKT/mTOR pathway regulates cell proliferation and survival, and is over-activated in more than 60% of TNBC patients [16]. In addition, p-mTOR expression is associated with poor prognosis in early-stage TNBC [17]. In recent years, the PI3K/Akt/mTOR pathway has been considered as a therapeutic target for novel drug discovery and several pathway inhibitors such as PQR309, Ipatasertib, AZD5363, and temsirolimus are being evaluated in clinical trials [18]. In this study, we found that AD downregulated the expression of AKT and mTOR in TNBC cells. Our results suggested that the inhibition of PI3K/AKT/mTOR pathway may be a potential mechanism for the anti-TNBC activity of AD.

AD inhibited in vivo MDA-MB-231 xenograft tumor growth. Female BALB/c nude mice were inoculated with MDA-MB-231 cells in their mammary fat pads. Two weeks later, mice were randomized into four groups and received treatment with vehicle (0.5% CMCNa, 1% Tween-80), AD-LD (AD 25 mg/kg), or AD-HD (AD 50 mg/kg) daily via oral adminstration, or docetaxel (10 mg/kg) once a week via i.p. injection. The treatment period lasted for 22 days after which all mice were sacrificed. (A) Tumor volumes of each group throughout the experimental period. (B) Images of tumors at experimental endpoint. (C) Mouse body weights throughout the experimental period. (D) Tumor weights at experimental endpoint. Data are expressed as means ± SEM.*P<0.05, **P<0.01, compared to the vehicle group. 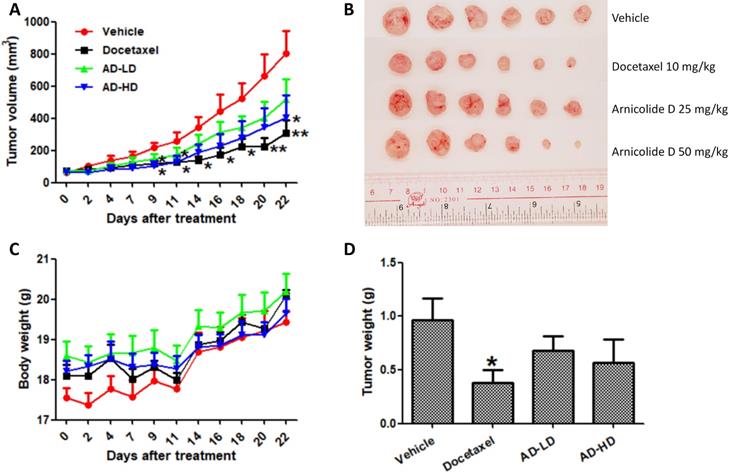 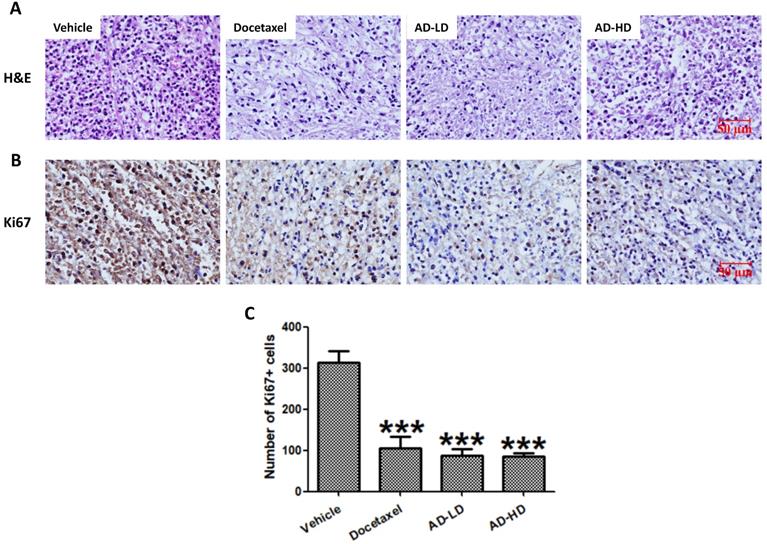 STAT3 is constitutively activated in more than 40% of breast cancers and is associated with initiation, progression, metastasis, chemoresistance, and immune evasion of TNBC [19, 20]. Several natural sesquiterpene lactones, such as alantolactone, parthenolide and dehydrocostuslactone, exhibit anti-TNBC effects via downregulation of p-STAT3 expression [21]. In the present study, we found that AD inhibited the expression of STAT3 in MDA-MB-231 cells, which implies that STAT3 may be involved in the AD-mediated inhibition of TNBC cells as well.

A prior clinical study has reported that the mTOR and JAK2/STAT3 pathways are over-activated in inflammatory and invasive ductal breast cancers after neo-adjuvant chemotherapy [22]. Hence, the combination of therapy against mTOR and STAT3 is a promising prospect for the treatment of triple negative breast cancer [23]. In this study, AD exhibited significant inhibition of the AKT/mTOR and STAT3 pathways, and may be a promising drug candidate against TNBC.

In conclusion, this study demonstrates for the first time that AD could inhibit TNBC cell growth both in vitro and in vivo, and the mechanism of these effects was associated or at least partially associated with the inhibition of the Akt/mTOR and STAT3 signaling pathways. Our findings suggest AD as a potential novel adjunctive therapeutic drug for TNBC.

This work was supported in part by the Basic Research Foundation of the Shenzhen Science and Technology Innovation Committee (JCYJ20160229173844278), and the Health and Medical Research Fund, Food and Health Bureau, Hong Kong SAR (project no. 16172701) to WT.

WT, SC, and DM contributed to the conceptualization and design of the study. ZQ, YL and QB conducted the experiments. ZQ and YL wrote the manuscript. WT and SC contributed to manuscript revision. All authors read and approved the final manuscript.