Circular RNA (circRNA), a member of non-coding RNA, plays an essential regulatory role in many human physiological and pathological processes; however, its role in clear cell renal cell carcinoma (ccRCC) still unclear. This study aims to investigate the effect and mechanisms of circRNA on ccRCC progression. A human circRNA microarray was used to discover differential expression circRNA, and a quantitative real-time polymerase chain reaction (qRT-PCR) was performed to verify the expression of circRNA. The function and mechanism of circRNA were explored by cell transfection, cell counting kit-8, fluorescein isothiocyanate (FITC) Annexin V apoptosis detection, wound healing, transwell, and western blot. The result indicated that circ-APBB1IP was significantly up-regulated in ccRCC. In vitro, knockdown of circ-APBB1IP by siRNA suppressed the proliferation, migration, and invasion and increased the apoptosis of ccRCC cells. Further study found that knockdown of circ-APBB1IP up-regulated protein expression of cleaved caspase-3, cleaved caspase-7, cleaved caspase-8, cleaved caspase-9, Bax, Bad, Bak, E-cadherin and down-regulated expression of Bcl-2, N-cadherin, MMP-2, MMP-9, p-ERK1/2. Our result indicates that circ-APBB1IP has a vital function in ccRCC tumorigenesis. These findings suggest that circ-APBB1IP represents a novel potential biomarker and therapeutic target of ccRCC.

Circular RNA (circRNA) is one of the novel noncoding RNA with various molecular functions. Different from micro RNA (miRNA) and long non-coding RNA (lncRNA), circRNA has a unique closed-loop structure [4, 5]. Due to without 5' cap or 3' poly (A) tail, circRNA is more stable and resistant than linear RNA [6]. Recently, circRNA become a hot molecule in cancer progression research; the progression of tumor growth, apoptosis, metastasis, and drug resistance have been reported to get closely related to circRNA [7]. For example, circular RNA ABCB10 was related to apoptosis in ccRCC cells [8]. Circ-LDLRAD3 promotes the proliferation, migration, and invasion of pancreatic cancer cells [9]. FBXW7 circular RNA regulates proliferation, migration, and invasion of colorectal carcinoma through NEK2, mTOR, and PTEN signaling pathways [10]. Circ-0000284 arouses the malignant phenotype of cholangiocarcinoma cells and regulates the biological functions of peripheral cells through cellular communication [11]. CircRNA can be used as a diagnostic target and biomarker for diseases because of its diagnostic and therapeutic potential in many diseases [12].

In this present study, human circRNA microarray analysis was performed to screen circRNA expression profiles in ccRCC cancer tissue. According to the cutoff values (fold change > 1.5 and P < 0.05) to filter differential expression circRNA, there were 356 differential expressions circRNA were detected, of which 127 circRNA were up-regulation, and 229 circRNA were down-regulation, circRNA with high fold change were selected to verification. The result showed that circ-APBB1IP was significantly overexpression in ccRCC tissues. The aim of this study was to verify whether circ-APBB1IP plays a regulatory role in the progression of ccRCC.

A total of 14 pairs of tumor tissues and tumor-distant tissues of ccRCC were collected from the Affiliated Hospital of Guangdong Medical University, and three pairs were used to perform microarray analysis. In comparison, 11 pairs were used to perform qRT-PCR. All tissue samples have been identified by pathologists in this hospital. This study was approved by the Ethics Committee of Affiliated Hospital of Guangdong Medical University. All samples were immediately frozen in liquid nitrogen after resection and stored at -80°C until use. Human ccRCC cells (786-O and Caki-1) were obtained from the cell bank of the Chinese Academy of Science (Shanghai, China), and the normal renal cell line (HK-2) was obtained from Guangzhou Jennio Biological Technology Co., Ltd. (Guangzhou, China). 786-O cells were cultured in Roswell Park Memorial Institute-1640 medium (RPMI 1640 medium) (GIBCO, Thermo Fisher Scientific, Inc., Waltham, MA, USA), while Caki-1 cells were cultured in McCoy's 5A medium (Sigma, Merck Life Science, (Shanghai) Co. Ltd), HK-2 cells were grown in Dulbecco's modified Eagle's medium (DMEM) (GIBCO, Thermo Fisher Scientific, Inc., Waltham, MA, USA). All culture mediums were supplemented with 10% (v/v) fetal bovine serum (FBS; GIBCO, Thermo Fisher Scientific, Inc., Waltham, MA, USA) at 37 °C in a humidified atmosphere that contained 5% CO2.

Total RNA was extracted from the tissue samples and cultured cells using TRIzol reagent (Invitrogen, Carlsbad CA, USA). According to the manufacturer's instructions, using the PrimeScript™ RT reagent Kit with gDNA Eraser (Takara, Japan) to synthesize cDNA through reverse transcribed. Then, we performed qRT-PCR using TB Green® Premix Ex Taq™ (Tli RNaseH Plus) (Takara, Japan) according to the manufacturer's instructions including an initial denaturation step (95°C for 30 s) and 40 cycles of denaturation (95°C for 5 s) and annealing (60°C for 30 s). The qRT-PCR process was conducted on the Light Cycler 480 II Real-Time PCR system. The result was calculated using the 2-ΔΔCt method, and GAPDH was used as an internal reference [13, 14]. The sequence of the primer is as follows: circ-APBB1IP: forward: 5′-TCAGACTGGACAAGAGACACAGA-3′, reverse, 5′-TGTCCTCTGCTCAGCCTCAC-3′; GAPDH: forward: 5′-GGTGAAGGTCGGAGTCAACGG-3′, reverse, 5′-CCTGGAAGATGGTGATGGGATT-3′. Primers for circ-APBB1IP and GAPDH were synthesized by Sangon Biotech (Shanghai, China).

According to the manufacturer's instructions, cells of ccRCC were transfected with lipofectamine 3000 (Invitrogen, USA). The sequence of siRNA (sense: AAACCCCCAGAGUCCUUAATT, antisense: UUAAGGACUCUGGGGGUUUTT) and negative control (NC) (sense: UUCUCCGAACGUGUCACGUTT, antisense: ACGUGACACGUUCGGAGAATT) were designed and synthesized by GenePharma Co., Ltd. (Shanghai, China). Three μl lipofectamine 3000 and 3 μl siRNA (20 μM) were diluted in 125 μl Opti-MEM medium without supplement respectively 5 minutes, as well as NC group was performed with the same formulation, then, cells were incubated with siRNA-lipofectamine complexes for 6 hours and were cultured in 6-well plates (Nest Biotechnology, Wuxi, China) for 24 hours. In order to verify whether the transfection was successful, the expression of circ-APBB1IP was detected by qRT-PCR after transfections. The independent experiment was repeated three times.

The migratory ability of ccRCC cells was assessed using a Wound healing (migration) assay. 786-O and Caki-1 cells were seeded into 6-well plates after cell transfection when the cells fill the 6-well plates, a pipette tip was used to make scratches in the monolayer of ccRCC cells, the floating cells were washed off with PBS, and then cells in 6-well plates were cultured with medium without FBS. The migration of 786-O cell was observed after 12 hours, while Caki-1 cell was recorded after 48 hours. The images were taken with EVOS XL Core Imaging System (Life Technologies, USA). The invasive ability of ccRCC cells was detected using the transwell assay. After transfection, 786-O cell (5×104 cells/well) and Caki-1 cell (1×105 cells/well) were resuspended in 200 μl serum-free medium and planted them in the upper chamber of the insert (membranepore size, eight μm; Corning) with Matrigel (BD Biosciences, Billerica, MA, USA). There was 750 μl of 20% FBS-medium in the bottom chambers. After 24 hours of culture, the cells adhering to the base membrane of the inserts were detected with EVOS XL Core Imaging System.

All data were analyzed with GraphPad Prism 7 (GraphPad Software, La Jolla, CA, USA), and the results were expressed as the mean ± SD. The differences between groups were determined by unpaired Student's t-test analysis. A value of P < 0.05 was considered statistically significant. 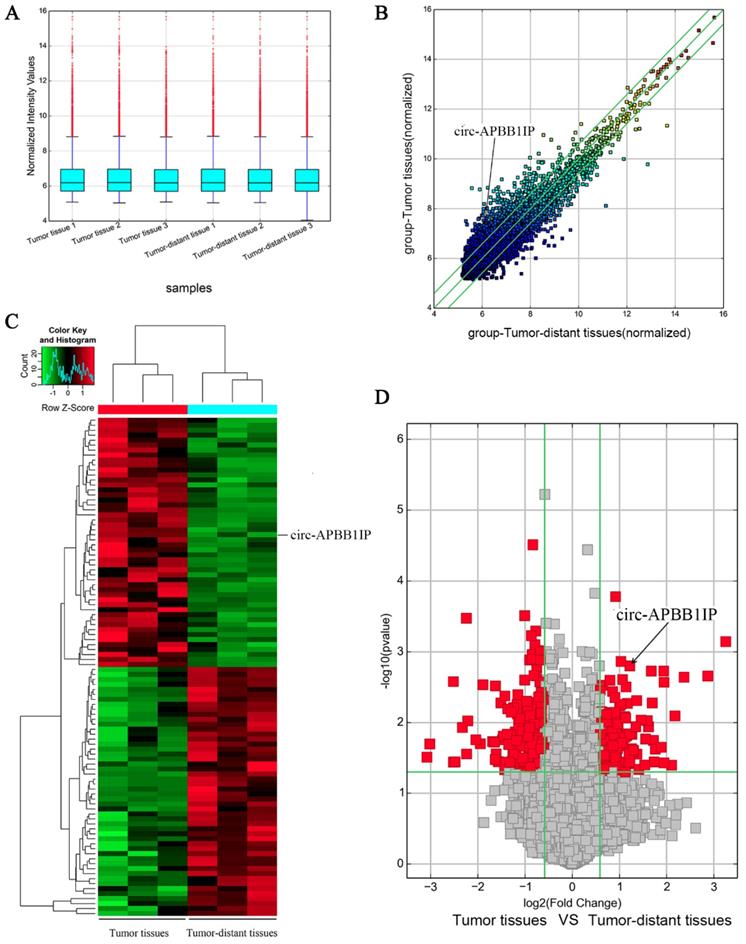 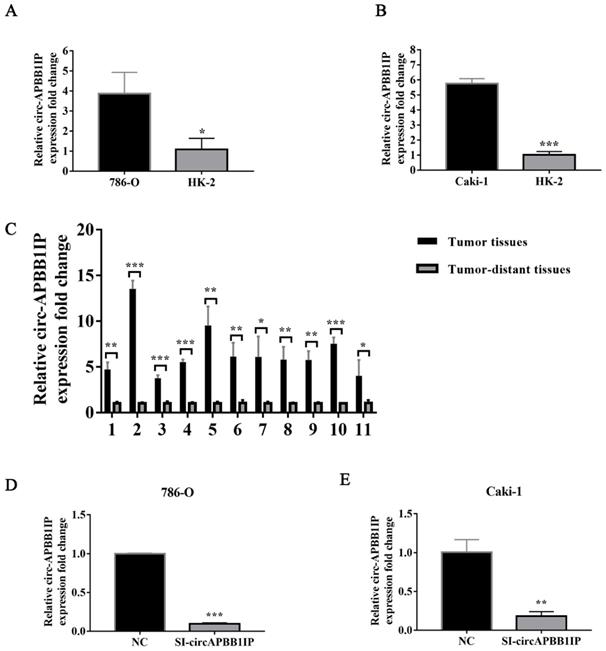 Knockdown of circ-APBB1IP of ccRCC cells

The knockdown of circ-APBB1IP inhibited proliferation and promoted apoptosis in ccRCC cells. (A, B) The CCK-8 assay was performed to determine cell proliferation at different time points after infection. (C, D) Fluorescein isothiocyanate (FITC) Annexin V Apoptosis Detection kit was used to determine the apoptotic rate in 786-O and Caki-1 cells. The data are presented as the mean ± SD for three independent experiments. T-test, *P < 0.05, **P < 0.01, and ***P < 0.001. 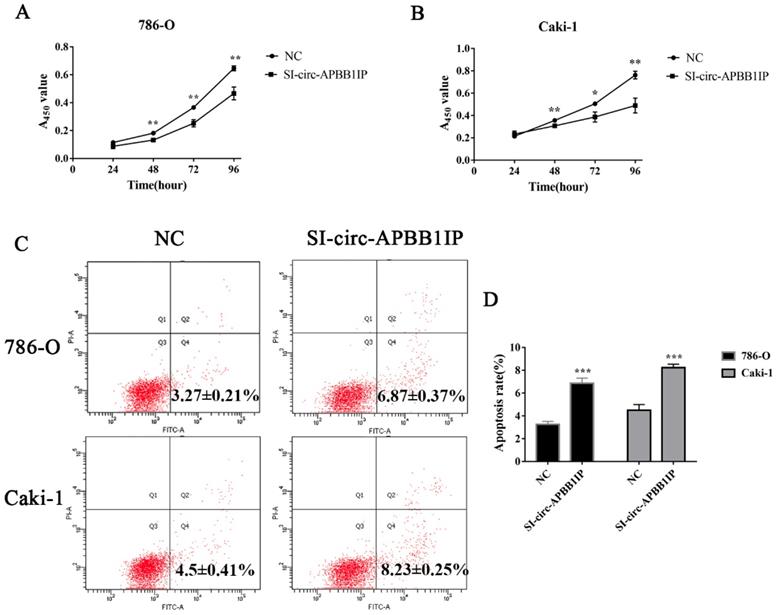 The knockdown of circ-APBB1IP inhibited migration and invasion in ccRCC cells. (A, B) The wound healing (migration) assay was used to measure the migration rate of ccRCC cells, the migration rate of 786-O was detected at 12 h after the scratch, while Caki-1 at 48 h after the scratch. (C, D) Transwell assay was performed to determine the invasion rate of ccRCC cells, 786-O cell (5×104 cells/well), and Caki-1 cell (1×105 cells/well) were seeded into the Matrigel-coated upper chamber, after 24 h, those that passed across the coated chamber were detected. The data are presented as the mean ± SD for three independent experiments. T-test, **P < 0.01, and ***P < 0.001 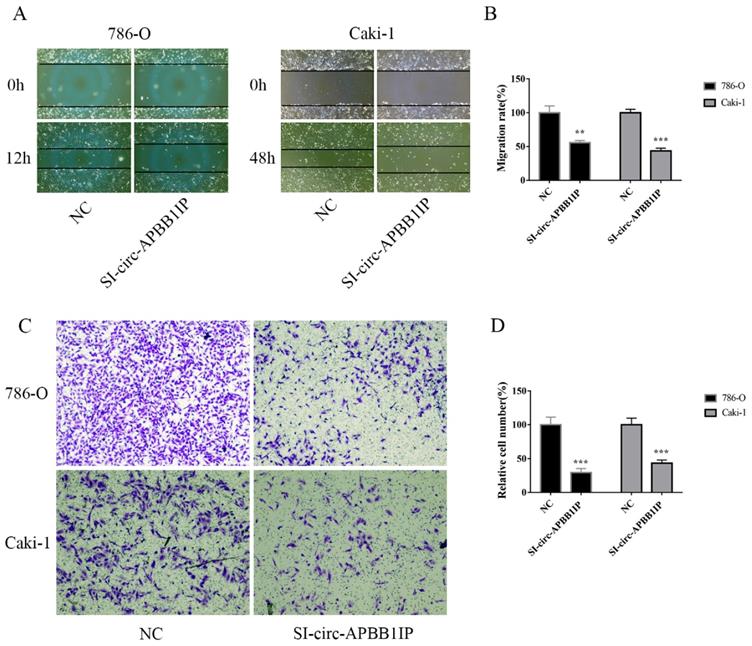 The incidence and mortality rates of ccRCC are increasing though the methods of diagnosis and treatment have improved significantly. It is necessary to find novel biomarkers for reducing mortality rates [22]. With the development of genomic analysis platform, more and more circRNA have been identified, several studies have proved that circRNA was closely associated with ccRCC [23, 24]. In this study, we aimed to investigate the biological roles and mechanisms of circ-APBB1IP in ccRCC development.

A growing number of studies have indicated that circRNA has a vital regulatory function in ccRCC. For instance, Chen et al. reported that overexpression of hsa_circ_001895 promoted cell proliferation, invasion, migration, and inhibited cell apoptosis of ccRCC [25]. Xue et al. indicated that circ-AKT3 inhibited migration and invasion of ccRCC via altering miR-296-3p/E-cadherin signals [26]. Huang et al. revealed that circular RNA ABCB10 promoted cell proliferation and inhibits cell apoptosis of ccRCC [8]. In the present study, we found that the expression of circ-APBB1IP was significantly elevated in ccRCC tissues and cells. Our results suggested that knockdown of circ-APBB1IP could suppress the proliferation, migration and invasion, whereas promoted the apoptosis in ccRCC cells. Deregulation of apoptosis was a hallmark of cancer and got related to tumor development and progression [27]. Caspases are central to the mechanism of apoptosis; caspase-8 and caspase-9 are the initiators of apoptosis, while caspase-3 and caspase-7 act as executors [28]. Irreparable genetic damage is one of the trigger of the initiation of the intrinsic mitochondrial pathway, which is strictly regulated by proteins belonging to the Bcl-2 family [29]. In addition, the expression of cadherin and MMPs was closely associated with cell migration and invasive behavior [30]. We have detected the expression of the above-related proteins. These results revealed that circ-APBB1IP might be an oncogenic factor in ccRCC cells. 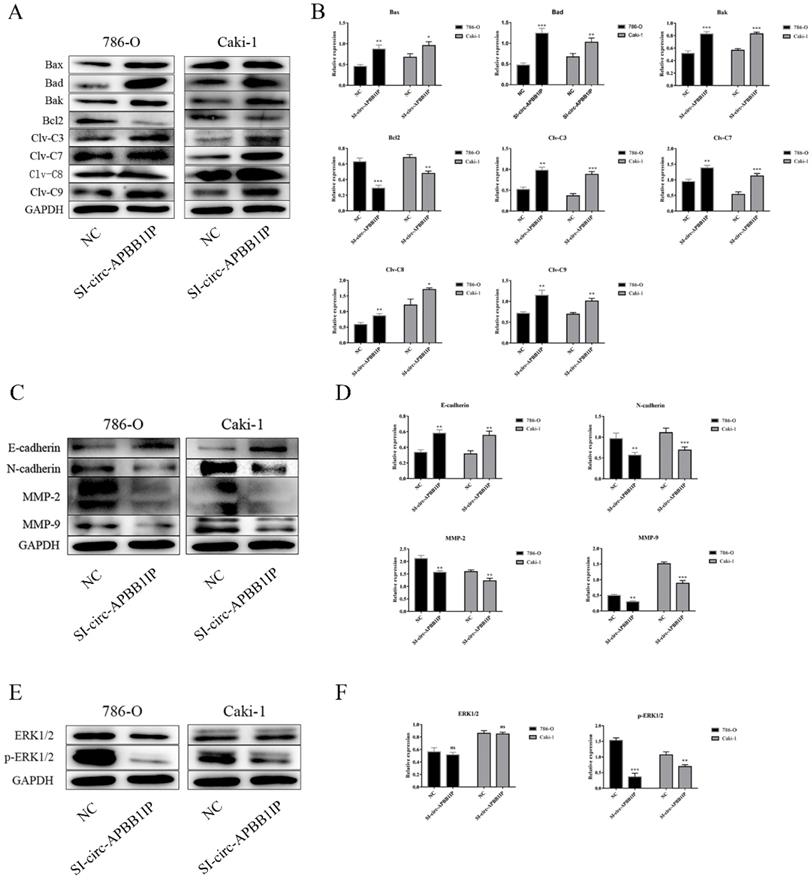 At present, the mechanism of circRNA has been mainly reported as a molecular sponge for miRNA; however, the signaling pathway network was another essential mechanism of circRNA [31]. For instance, circRNA has been identified to interact with Wnt/β-catenin pathway and AKT/mTOR signaling pathway in cancer by modulating key molecules of these pathway [32, 33]. ERK1/2 is an important subfamily of MAPK that involve in a series of cellular activities and physiological processes [34]. The activation of ERK1/2 regulates the activity of many transcription factors via phosphorylation, eventually influencing the specific biological effects of cells. In addition, the expression level of p-ERK1/2 is closely associated with progression of various cancers [35]. In this study, we explored the critical protein of the ERK1/2 signaling pathway. The result showed that the expression of p-ERK1/2 was suppressed after the silencing of circ-APBB1IP. Hence, circ-APBB1IP may be as a regulator of ERK1/2 and induced ERK1/2 activation. Besides, the correlation of circRNA and ERK1/2 signaling pathway has been reported in the previous study [31]. Therefore, there was reason to believe that circ-APBB1IP promoted cells growth, migration, invasion, and inhibited cells apoptosis via the ERK1/2 signaling pathway.

In summary, this study was the first study to investigate the role and mechanism of circ-APBB1IP in ccRCC. Our results suggested that circ-APBB1IP was overexpressed in ccRCC tumor tissues and ccRCC cell lines, and circ-APBB1IP promoted ccRCC cells growth, migration, and invasion and suppressed apoptosis via ERK1/2 signaling pathway. These findings provided a potential target for molecular targeted therapy for ccRCC.

This work was supported by the grants: Scientific Research Fund of Guangdong Medical University (No. M2017038); The National Natural Science Funds (No. 81272833) of China.

JM, YZ and JL designed the experiments. JM, ZA, LC, SL, WZ and HW participated in the experiments. JM and YZ finished statistical analyses. JM wrote the article, YZ contributed to the revision of the article. JM performed figures. JL and YZ provided the supervision and the financial support. All authors reviewed and approved the manuscript.