Invasive breast carcinoma (IBC) is the most frequent cancer in women worldwide and has been studied for many decades; however, its etiology remains unknown [1,2]. Many studies have shown that IBC is a complex and multifactorial disease, and its development has been associated with numerous risk factors including age, parity, hormonal influences, lifestyle, environment, diet, race and inherited genetic predisposition [1-3]. In the era of next-generation sequencing, several genetic alterations have been focused on pathogenesis of IBC [4-6]. Interestingly, these alterations differed according to IBC subtypes and many clinical trials have been proposed based on these results [7,8].

In many ongoing trials, PIK3CA is considered a targetable potential driver of BC. Phosphatidylinositol-3-kinase (PI3K/Akt) pathway regulates multiple biological signaling such as cell proliferation, differentiation, apoptosis, and mortality [9]. The PI3Ks are heterodimers consisting of a catalytic subunit (p110α, PIK3CA) and an adaptor/ regulatory subunit (p85), subunits that are activated by tyrosine kinase growth factor receptors such as epidermal growth factor receptor (EGFR) and insulin-like growth factor-1 receptor (IGF-1R), cell adhesion molecules such as integrins, G-protein- coupled receptors (GPCRs), and oncogenes such as Ras [10]. The frequency of PIK3CA mutation of IBC in Korean population was high (26.9%), and its mutation and amplification were frequent and important in IBC [11]. Therefore, PIK3CA inhibitors are being used to treat IBC according to ER status in clinical trials [12,13]. However, both mutation and amplification of PIK3CA gene have not been analyzed in Korean patients with IBC.

In present study, clinical and prognostic values of PIK3CA mutation and amplification were investigated in 128 Korean patients with IBC. This study will allow a better understanding and insight into molecular mechanisms of IBC, which have essential implications for IBC therapy.

One hundred and twenty-eight patients diagnosed with IBC were included in the study. IBCs and adjacent non-neoplastic tissues were obtained from patients undergoing surgery in Keimyung University Dongsan Medical Center (Daegu, Korea) between 2011 and 2014. Tissue samples were provided from the Keimyung Human Bio-Resource Bank, Korea. All patients were educated of the study purpose and informed consent was obtained from each study participant. The protocols were approved by the Institutional Review Board of Keimyung University Dongsan Medical Center (approval #2014-03-038-002).

Data on histopathological characteristics including staging, histologic grade, estrogen receptor (ER), progesterone receptor (PR), and human epidermal growth factor receptor 2 (HER2) were obtained from pathology records. Molecular subtypes were defined based on the St Gallen's criteria on ER, PR, and HER2 in conjunction with histologic grade. The staging of primary tumor was based on the The American Joint Committee on Cancer Staging Manual, 7th edition [14]. All markers were visually assessed by pathologists (Kwon SY). Tumor areas and adjacent normal mucosa were used for DNA extraction using an extraction kit (Absolute DNA Extraction Kit, BioSewoom, Gyeongsangnam-do, South Korea) according to the manufacturer's instructions. DNA quantity and quality were measured using a NanoDrop 1000 (Thermo Fisher Scientific, Pittsburgh, PA, USA).

Two hot spot-regions (exons 9 and 20) of PIK3CA mutation were investigated in the 50 HCC samples, because more than 75% of PIK3CA missense mutations cluster were found within these regions [4-6]. The polymerase chain reaction (PCR) amplification of the PIK3CA was performed as described previously [9-11]. The primer sequences of the PIK3CA exon 9 were forward, 5'-CCA GAG GGG AAA AAT ATG ACA A-3' and reverse, 5'-ACC TGT GAC TCC ATA GAA A-3'. The sequences of the exon 20 primers were forward, 5'-TTG ATG ACA TTG CAT ACA TTC G-3' and reverse, 5'-AAT TGT GTG GAA GAT CCA ATC C-3'. PCR was done using AmpliTaq Gold (Applied Biosystems, USA). The PCR conditions were as follows: 1 cycle of 95 ℃ for 11 min, 40 cycles of 95 ℃ for 30 sec, 55 ℃ for 40 sec, and 72 ℃ for 1 min, followed by 1 cycle of 72 ℃ for 10 min. The PCR products were electrophoresed on 1.5% agarose gel and stained with ethidium bromide to confirm the size of the bands. Direct DNA sequencing of PIK3CA was subsequently performed using an ABI 3730 DNA sequencer (Bionics, Seoul, South Korea).

Copy number of PIK3CA gene was analyzed by quantitative real-time (qRT) PCR. For the quantitative determination of PIK3CA content relative to nDNA, primers for specific amplification of exon 20 in PIK3CA gene and nDNA-encoded ß-actin gene were selected according to previous study. Real-time PCR was then carried out on an LightCycler 480 II system (Roche Diagnostics, Germany) with a total volume of 20 µl reaction mixture containing 10 µl SYBR Green Master MIX (Takara, Japan), 8 pmol of each primers, and DNA (50 ng). The PCR conditions were 95°C for 1 min, followed by 40 cycles of 95°C for 15 s, and 60°C for 30 s. The threshold cycle number (Ct) values of the ß -actin gene and PIK3CA gene were determined. The copy number of PIK3CA in each tested specimen was then normalized against that of ß -actin gene to calculate the relative PIK3CA copy number. Each measurement was repeated in triplicate and 5 serially diluted control samples were included in each experiment.

PIK3CA expression according to PIK3CA mutation in breast cancers. 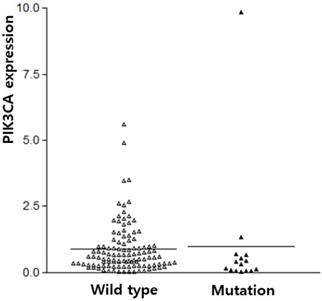 Kaplan-Meier cures for overall survival in breast cancers according to PIK3CA mutation (A) and PIK3CA expression (B). 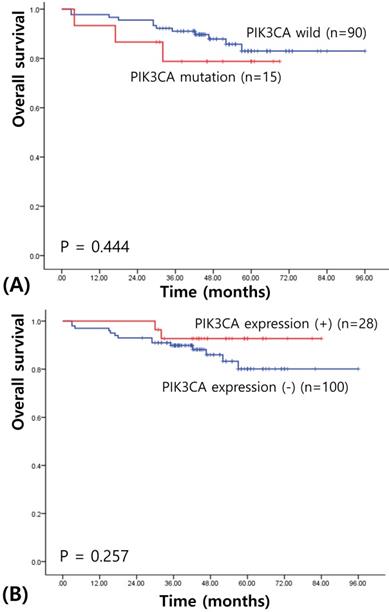 We next assessed survival to determine the prognostic significances of PIK3CA mutation and expression in IBC. The median follow-up of patients for survival analysis was 58.93 months (range, 3-106 months). Univariate survival analysis using Kaplan-Meier curves showed no prognostic value of PIK3CA mutation (χ2= 0.586, P = 0.444; see Figure 2A). PIK3CA expression also did not have any prognostic value for the patients with IBCs (χ2= 1.283, P = 0.257; see Figure 2B). When stratifying for different variables, PIK3CA status did not appear to confer any statistically significant prognostic value.

Characteristics of PIK3CA mutation and expression in invasive breast carcinomas 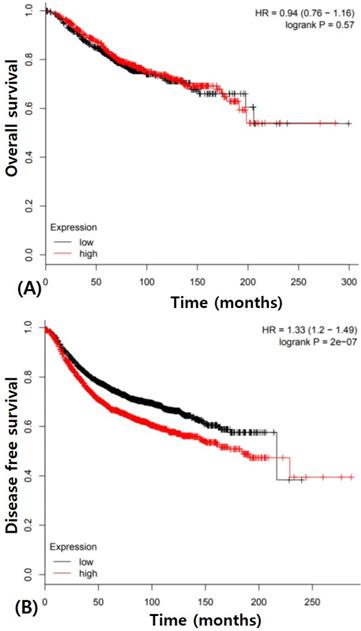 PIK3CA is a key down-stream protein kinase of the PI3K-AKT signaling pathway playing an important role in cancer cell proliferation, catabolism, cell adhesion and apoptosis [15]. Previous studies have shown that PIK3CA, as a subunit of PI3K, is frequently mutated in various human cancers as a main mechanism in the activation of PI3K/Akt signaling pathway [4-6,9-11]. Though most studies have focused the significance of PIK3CA mutation, some studies about PIK3CA expression in IBC were also performed [16,17]. Several characteristics of PIK3CA mutations and expression in IBC have been observed, including a strong association with the estrogen receptor, a lack of an association with robust activation of the classical PI3K pathway, as well as a relatively better prognosis for patients with mutation type compared with wild-type counterparts [9-17].

For a first time, both PIK3CA mutations and expression were studied in Korean patients with IBC. The frequencies of PIK3CA mutations (14.3%) were in concordance with previous studies and slightly lower because only two hot spot mutations were analyzed [11,13,14]. According to The Cancer Genome Atlas (TCGA) data, PIK3CA mutation was found in 34.18% of IBC [6]. Detail functions of two mutations, E542K or E545K in exon 9 and H1047R or H1047L in exon 20 were demonstrated [18,19]. Exon 9 mutations are located in the helical domain of p110α, and are considered to enable p110α to escape the inhibitory effect of p85 via the Src-homology 2 (SH2) domain. Exon 20 mutations are located near the activation loop in the kinase domain, promoting constitutive PI3K signaling. These mutations may induce a breast carcinogenesis via PI3K activation.

In present study, we identified the clinical and prognostic characteristics of the expression and mutation of PIK3CA in Korean patients with IBC. These findings add to the evidence that PIK3CA has a potential role in IBC. A precise understanding of the role of PIK3CA in IBC development will usher in a new era for breast cancer prevention and therapy.

This study was supported by grants from the Basic Science Research Program through the National Research Foundation of Korea (NRF), funded by the Korean Government (MSIP) (No. 2014R1A5A2010008).