The underlying mechanisms that mediate the effects of vitamin C on endothelial cell aging are widely unknown. To investigate whether Piwi-interacting RNAs (piRNAs) are involved in this process, an endothelial aging model was induced in vitro using H2O2 in human umbilical vein endothelial cells (HUVECs) and then treated with vitamin C (VC). Untreated HUVECs without H2O2 exposure were used to serve as the negative control group. Cell cycle, cell viability, and aging-associated protein expression were assessed, and RNA sequencing was performed to reveal the piRNA profile. Functional and regulatory networks of the different piRNA target genes were predicted by the Kyoto Encyclopedia of Genes and Genomes (KEGG) pathway enrichment and Gene Ontology (GO) analysis. H2O2 induced G1 phase cell arrest, decreased cell viability, and upregulated the senescence marker p16 in HUVECs. We found that VC treatment inhibited G1 phase cell arrest, increased the number of cells in the S and G2/M phases, increased cell viability, and decreased p16 expression. The piRNA expression profiles revealed that a large proportion of piRNAs that were differentially expressed in H2O2-treated HUVECs were partly normalized by VC. Furthermore, a number of piRNAs associated with the response to VC in H2O2-treated HUVECs were linked with senescence and cell cycle-related pathways and networks. These results indicate that the ability of VC to attenuate H2O2-mediated endothelial cell senescence may be associated with changes in expression of piRNAs that are linked to the cell cycle.

The morbidity and mortality rate of cardiovascular disease (CVD) is relatively high worldwild (1). Cellular senescence is an irreversible arrest of cell growth. Accumulating evidence suggests that cellular senescence exerts important effects on vascular endothelial dysfunction, which is believed to be an early pathological event during CVD development. For example, secretion of atherosclerosis-related factors, such as intercellular adhesion molecule-1 and the inhibitory activity of endothelial nitric oxide synthase, is found in senescent human umbilical vein endothelial cells (HUVECs) (2). Atrial endothelial senescence was found to promote thrombus formation and extracellular matrix remodeling (3). In an aging mouse model with vascular endothelium damage, antioxidant therapy can alleviated the dysfunction of aging vascular endothelium cells (4). Studies have shown that long-term addition of the antioxidant vitamin C (VC), which can reduce the immune levels associated with thymic aging (5). VC may also be involved in the function of cardiovascular endothelial cells (6), which can improve endothelial dysfunction in patients with hypertension (7). However, the mechanisms of VC in cardiovascular aging-related endothelial injury are still unclear.

Piwi-interacting RNAs (piRNA) are a type of non-coding RNA of approximately 26-32 nucleotides in length (8). They maintain genomic integrity by regulating the expression of retrotransposons (9, 10). piRNA is widely expressed in adult cells, including germ cells, cardiomyocytes, and cerebral vascular endothelial cells, and it is involved in regulating CVD-related pathways (11-14). However, the expression pattern of piRNA in the context of cardiovascular endothelial cell senescence remains unknown.

Herein, we investigated the effect of VC on H2O2-induced senescence in endothelial cells and whether piRNA is involved in VC-mediated antiaging effects.

HUVEC (PUMC-HUVEC-T1) were purchased from the Cell Resource Center of IBMS, CAMS/PUMC (Beijing, China). Cells were cultured in Dulbecco's Modified Eagle's Medium (DMEM; Invitrogen, Waltham, MA, USA) containing 10% fetal bovine serum and incubated in a 5% CO2 incubator at 37°C. Cells were treated with H2O2 (100 μM) to create an in vitro model of senescence (H2O2 group) (15-17). After 2 h, some of these cells were then cultured in medium containing VC (200 μM; Sigma-Aldrich, St. Louis, MO, USA) to investigate the effect of VC on aging endothelial cells (VC group). Cells without H2O2 or VC treatment were used as negative controls (Control group).

Approximately 106 cells for each treatment condition were collected and suspended in cold PBS. Cells were then incubated in 70% ethanol overnight. The following day, cells were incubated in propidium iodide (BD Biosciences, San Jose, CA, USA) and subjected to flow cytometry (Becton, Dickinson and Company, Franklin Lakes, NJ, USA) to determine the stages of cell cycle. DNA content was calculated at each phase of the cell cycle.

An R package (version 3.1, Lucent Technologies, Reston, VA, USA) was used to analyze the differentially expressed piRNAs. piRNAs that were differentially expressed following H2O2 treatment with or without VC were defined using a fold change of > 2 and Benjamini-Hochberg false discovery rate of < 0.001. An R package was used to predict candidate target mRNA for the piRNAs that were ranked in the top 10 for fold change and were restored by VC. Candidate mRNA and piRNA interaction networks were drawn using Cytoscape software (version 3.7.2, Cytoscape Consortium, San Diego, CA, USA).

To predict the function of the piRNAs involved in the effect of VC, Kyoto Encyclopedia of Genes and Genomes (KEGG) pathway enrichment (https://www.genome.jp/kegg/) and Gene Ontology (GO) analysis (http://geneontology.org/) were performed using an R package according to accepted standards.

RNA-seq was performed to characterize the piRNA expression in control, H2O2, and VC groups respectively. As shown in Fig. 2a, a volcano plot revealed that many piRNAs were differentially expressed in the H2O2 group compared with the control group. Of these, 340 piRNAs were upregulated, and 62 piRNAs were downregulated (Fig. 2a). The VC group also had significantly different expression levels of many piRNAs (Fig. 2b). There were 36 upregulated and 56 downregulated piRNAs in the VC group compared with the H2O2 group. Unbiased hierarchical clustering analysis showed a sequence of piRNAs that were upregulated after H2O2 induction and downregulated when VC was added to the cells. Conversely, some piRNAs were downregulated after H2O2 induction and were restored after VC treatment (Fig. 2c).

Effects of VC on H2O2-induced senescence in endothelial cells. (a) Flow cytometry showing the DNA content in each phase of the cell cycle, normalized to total content and expressed as a percent of cells in each cell cycle. (b) MTS assay showing the dynamic changes in cell viability 72 h after VC treatment. (c) Quantification of p16 protein expression after VC treatment. Control group, HUVEC cells without any treatment; H2O2 group, HUVEC cells exposed to H2O2; VC group, HUVEC cells exposed to H2O2 followed by treatment with VC. **** p < 0.0001, H2O2 group vs control group; #### p < 0.0001, VC group vs H2O2 group. 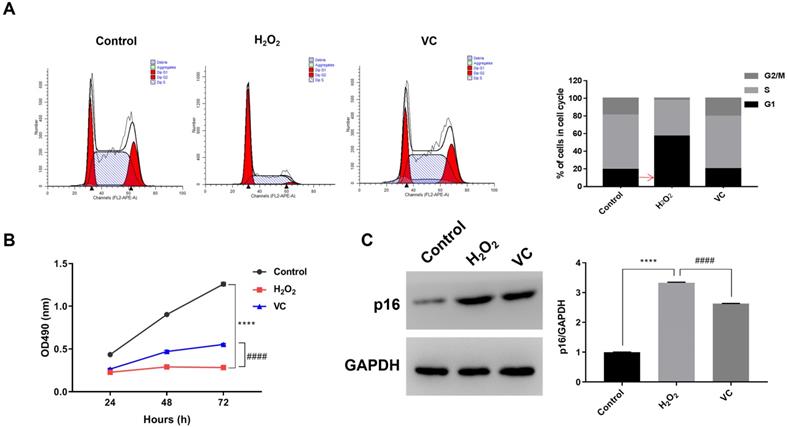 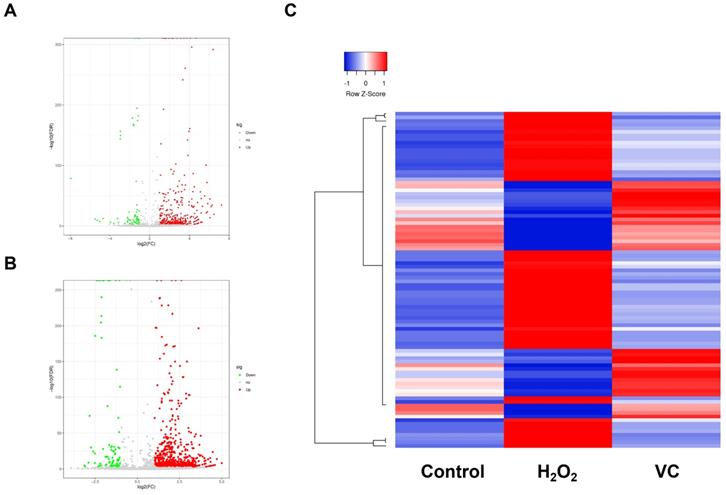 KEGG pathway enrichment analysis was performed using the target genes of differentially expressed piRNAs that were abnormally regulated in the H2O2 group and restored in the VC group. As shown in Fig. 3, KEGG analysis revealed that a series of piRNA target genes were enriched in the cell cycle pathway.

The present study assessed the protective effects of VC in the H2O2 model of cellular senescence in HUVECs. H2O2 treatment promoted cell arrest in the G1 phase, inhibited cell proliferation, and increased expression of aging markers. VC treatment attenuated the effects of H2O2 on cell cycle, cell proliferation, and expression of cell senescence markers. Further analysis of the piRNA expression profiles in the control group, H2O2 group, and VC group demonstrated that VC can repair the altered piRNA expression profile induced by H2O2. Moreover, bioinformatics analysis showed that the protective effect of VC on the H2O2 group is related to the cell cycle.

When cells are stimulated by external factors, they may exhibit protective responses such as apoptosis, autophagy, and aging. Damaged endothelial cells are more likely to age than undamaged cells (21). One of the manifestations of the cellular aging response to stress is G1 arrest. This change in cell cycle inhibits the proliferation of damaged cells and prevents potential malignant cellular transformations. Studies have shown that the decline in yeast cell proliferation caused by aging and cell death is associated with G1/S phase transition disorders (22). Decreased cell proliferation levels and G1 phase cell arrest were also observed in senescent breast cancer cells (23). These studies suggest that the blockade of the G1/S phase transition and decreased cell proliferation levels are among the hallmarks of cellular senescence. In addition to cell cycle transformation disorders, increased expression of the cell senescence marker p16 can be observed (23). Previous studies have suggested that p16 inhibits function of cyclin-dependent kinases, causing G1 cell cycle arrest (18). The current study used the oxidant H2O2 to observe the effects of VC on cell cycle and cell viability. H2O2 induced a decrease in endothelial cell viability and inhibition of G1/S transformation, whereas VC treatment ameliorated the senescence-associated profile. These results suggest that VC has a role in alleviating the H2O2-induced cellular senescence phenotype. 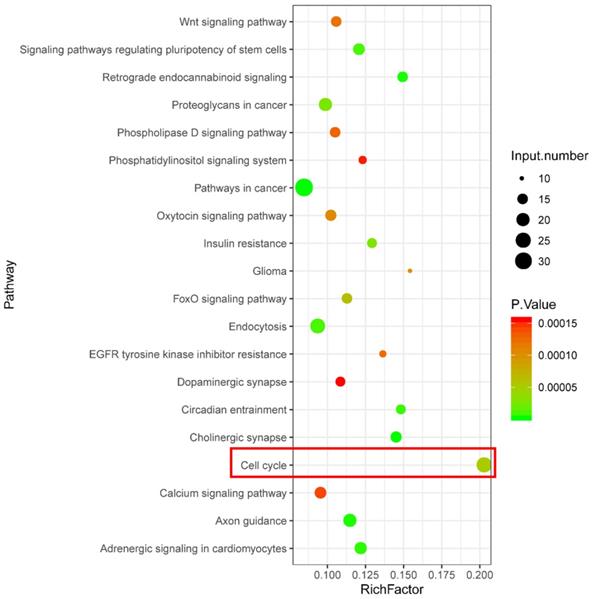 Functional analysis of VC-associated piRNAs. (a) piRNA-mRNA regulatory network, mRNA were enriched in cell cycle pathway in KEGG analysis, piRNAs of those upregulated by H2O2 and recovered by VC treatment (b) GO analysis predicting the potential role of piRNA target genes in (a).

Functional analysis of VC-associated piRNAs. (a) piRNA-mRNA regulatory network, mRNA were enriched in cell cycle pathway in KEGG analysis, piRNAs were those downregulated by H2O2 and rescued by VC treatment (b) GO analysis predicting the potential role of piRNA target genes in (a).

The current study also found that the effect of VC on HUVECs treated with H2O2 is related to piRNAs. Prior to the present report, only one study demonstrated the presence of piRNAs in prostate epithelial tissue from a vitamin D supplementation trial, suggesting that piRNA expression may be associated with the effects of vitamins (24). The current study provides evidence of piRNA expression related to VC. Furthermore, the functional prediction of piRNA target genes that were normalized following VC treatment revealed that these targets are enriched in numerous signaling pathways including cell cycle, endocytosis, circadian entrainment, Wnt signaling pathway, Forkhead box O (FoxO) signaling pathway, cholinergic synapse, oxytocin signaling pathway, axon guidance, and adrenergic signaling in cardiomyocytes. Among these pathways, the FoxO signaling pathway notably mediates oxidative stress and prolongs lifespan (25, 26). The oxytocin signaling pathway may play a role in regulating CVD and age-related disorders (27, 28). In particular, cell cycle is a significant pathway that corresponds with the observed improvement of G1/S transition in VC-treated cells. Therefore, we speculate that the function of some piRNAs may associate with the effect of VC in H2O2-treated cells, while more experimental evidence is needed in future studies.

By constructing the piRNA-mRNA interaction networks, the current study demonstrated that VC-mediated regulation of endothelial function-associated piRNAs regulates a range of cell cycle-related genes. However, the precise function of these differentially expressed piRNAs is still unknown. Among the targets of the piRNAs within the network, CDK2 is an important gene that regulates the cell cycle and promotes cell cycle transition by binding to different ligands. For example, CDK2 binding to cyclin E can phosphorylate retinoblastoma protein to promote the G1/S phase transition (29, 30). It also has been found that MDM2 promotes the G1/S transition that is suppressed by p53 (31). Furthermore, MYC functions to promote cell cycle progression, and inhibition of MYC expression can lead to G1 arrest (32, 33). In addition, HDAC1 is necessary to suppress G1/S phase transitions (34). Finally, MCM is a gene that rests during G1, and it is activated after cells enter the S phase. MCM plays an important role in the replication of S phase cells (35). Therefore, we propose that the piRNAs dysregulated by H2O2 were protected by VC treatment, and their association with the cell cycle may facilitate G1/S transition that was suppressed by H2O2 and may contribute to delays in cellular senescence.

In summary, the current study found that VC plays a role in repairing the H2O2-induced aging phenotype of vascular endothelial cells and may have a protective effect on aging-related CVD. Furthermore, this VC-induced antiaging phenotype may be related to piRNA expression. These piRNAs were primarily enriched in antiaging, metabolic, and aging-related cardiovascular regulatory pathways. This study supports the hypothesis that piRNAs play a significant role in the effect of VC against endothelial aging.