A polysaccharide isolated from the radix of Astragalus membranaceus, called PG2, used in traditional Chinese medicine, with potential hematopoiesis inducing and immunomodulation activities. PG2 extracted from A. membranaceus has been demonstrated as a novel alternative medicine for cancer patients. Recently, we demonstrated that PG2 enhanced chemotherapy through bystander effect and reduced the expression of indoleamine 2, 3-dioxygenase 1 in tumor cells. Many tumors have been proven to have a high expression of programmed cell death protein ligand-1 (PD-L1), which binds with programmed cell death protein-1(PD-1) in immune cells, thus causing immune tolerance within the tumor microenvironment. With decreased expression of PD-L1, increased immune response can be observed, which might be helpful when developing tumor immunotherapy. The antitumor therapeutic effect mediated by PG2 may associate with an inflammatory immune response at the tumor site. However, the molecular mechanism that by which PG2 inhibits PD-L1 is still incompletely known. The expression of PD-L1 was decreased after tumor cells were treated with PG2. In addition, the cell signaling pathway in tumor cells was evaluated by Western blotting analysis after PG2 treatment. PG2 can downregulate the expression of PD-L1 on the cell surface via the protein kinase B (Akt)/mammalian target of rapamycin (mTOR)/ribosomal protein S6 kinase beta-1 (p70S6K) pathway. In conclusion, our results indicate that PG2 inhibits PD-L1 expression and plays a crucial role in immunotherapy, which might be a promising strategy combined with other treatments.

The immune system is a host's defense mechanism to rid-off various health problems from infection to unhealthy cells. Molecular checkpoints, like programmed cell death protein 1(PD-1) and programmed cell death protein ligand 1 (PD-L1), protect the normal cells from being subjected to destruction during an immune response [1]. In tumor microenvironment, high-expression of these checkpoints on cancer cell surface leads to an escape from immune cell recognition, thereby, promoting immune tolerance [2]. Astragalus membranaceus (PG2) is a botanical-derived drug extracted from the root of A. membranaceus. The A. membranaceus is traditional Chinese medicine, an important aspect of alternative medicine that is widely used in the treatment of inflammatory diseases, tumors, radical scavenger activity, various cardiovascular diseases, and neuroprotective activity [3]. For tumor treatment, it is mostly used to decrease the side effect of chemotherapy known as tumor-related fatigue [4]. In recent years, PG2 is found to have anti-cancer effects, particularly when combined with chemotherapeutic drug [2]. When chemotherapy is used alongside PG2 treatment, the treatment outcome improves significantly based on clinical studies as seen in patient's improved physical fitness [5]. Nevertheless, the mechanisms of PG2 in the regulation of host immunity and therapeutic response remain unclear. Previously, PG2 stimulated host immunity by reducing the expression of indoleamine 2, 3-dioxygenase (IDO) [2]. Here, we investigated whether PG2 can decrease tumor immune tolerance by modulating immune checkpoints through the suppression of PD-L1 protein expression. We use murine 4T1 breast and murine CT26 colon cancer cells as models. In this study, we established a co-culture system, that is, tumor cells with either murine WEHI-3 leukemia or murine EL4 lymphoblast cells. Our findings further revealed a significant decrease in the inhibitory signal to T cells co-cultured with PG2-treated tumor cells as seen in the activated protein kinase B (Akt)/mammalian target of rapamycin (mTOR) pathway in immune cells. Moreover, the activated T cells may be accounted for by the decreased in cleaved caspase-3 expression which may then elicit tumor-specific immune attack. The tumor animal models were used to determine the efficiency of PG2/cisplatin combination therapy in the reduction of tumor immune tolerance in vivo. Based on these data, we provide a new mechanism for PG2 treatment as part of immunotherapy.

Cells were treated PG2 (0-10000 ng/ml) in serum- free medium for 24 h. The adherent cells were measured for cell survival. Cell proliferation was assessed by Cell Counting Kit-8 (Sigma-Aldrich) according to the manufacturer's instructions [8].

For PD-L1 detection, 106 cells were counted and fixed with 70% ethanol in -30°C overnight. Subsequently, PD-L1 antibody (GeneTex, Inc.) was added and stand for 1 h at 4°C and fluorochrome-labeled goat anti-rabbit IgG secondary antibody (GeneTex) for another 30 minutes at 4°C.

The subcutaneous 4T1 and CT26 tumor models to evaluate the antitumor efficacy of combination treatment with PG2 and cisplatin. Groups of 5-7 mice that inoculated subcutaneously with 4T1 or CT26 cells (106) at day 0 were intraperitoneal injected with PG2 (50 mg/kg) at day 7, day 9, day 14, day 16, day21, day 23 followed by cisplatin (2 mg/kg) at day 8, 15, and 22, or with either treatment alone. The control mice were treated with PBS. All of the mice were monitored for tumor weight at day 45.

All data were expressed as mean ± standard deviation (SD). The unpaired, two-tailed Student's t test was used to determine differences between groups. Any P value less than 0.05 is regarded statistically significant. 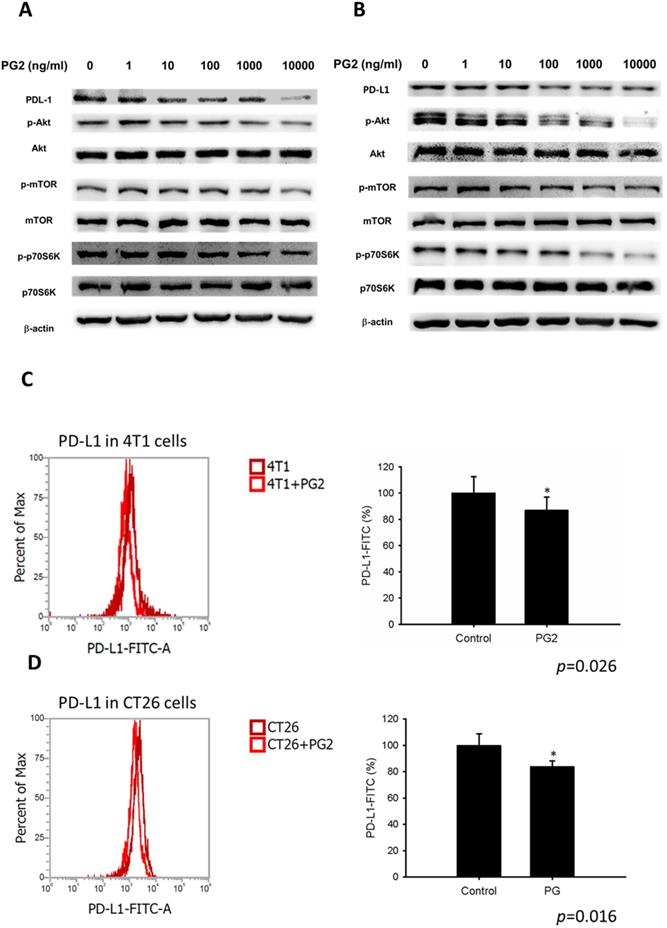 PG2 reduces PD-L1 expression through AKT pathway. The (A) 4T1 and (B) CT26 (105) cells were transfected with constitutively active AKT plasmid (5μg) for 16 h prior to treated with PG2 (10µg/ml) for 24 h. The protein expression was measured by Western blotting. Each experiment was repeated three times with similar results. 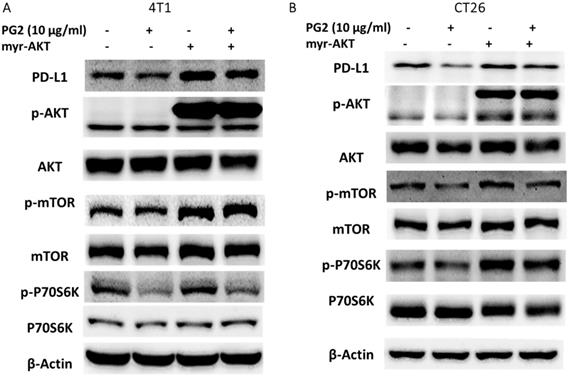 The reduction of PD-L1 was correlated with PG2 treatment in the tumor cells. We next investigated whether the reduction of PD-L1 plays a role in PG2-induced immune cell activities after immune cells/ tumor cells co-culture system. The activities of immune cells were rescued after PG2 treatment. Herein, we chose murine WEHI-3 leukemia, murine EL4 lymphoblast cells and primary murine T lymphocyte cells to co-culture with tumor cells treated with PG2. The AKT/mTOR pathway has emerged as a major effector of cell growth and proliferation [15]. As shown in Figure 4 A, the AKT/mTOR signal was increased in the WEHI-3, EL4 and primary T lymphocytes cells cultured with 4T1 cells treated with PG2 compared with those treated with PBS. We observed the similar results in murine EL4 lymphoblast cells and primary murine T lymphocyte cells co-cultured with CT26 (Figure 4B). PD‑L1 expressed in tumor cells interacting with its receptor PD‑1 expressed in immune cells could promote T cell apoptosis [16]. In Figure 4, the cleaved caspase 3 was significantly reduced in the immune cells cultured with tumor cells treated with PG2. These results reveal that PG2 inhibited the production and function of PD-L1 in tumor cells.

The PD-1/PD-L1 axis is linked to the suppression and evasion of host immune functions [1]. The expression of PD-L1 may be one mechanism for immune evasion used by tumors for promoting effector T cell apoptosis and reducing T cell infiltrating [16]. Furthermore, our data demonstrated that PG2 played the role in immune modulation, rather than its direct cytotoxicity on tumor cells. The treatment of PG2 in tumor cells decreased the surface expression and protein level of PD-L1. The combined therapy significantly inhibited tumor growth in tumor-bearing mice. PG2 serves as a critical role of tumor immunotherapy agent.

Here, we investigate the possibility that dysregulation of PD-L1 plays a role in tumor cell driven evasion of immune surveillance. Previously, PG2 not only modulated host immune responses but also enhanced the bystander effect of chemodrugs [2]. PG2 could induce gap junction (connexin (Cx) 43) expression. Cx43 increased intercellular tumor antigen transfer between antigen-present cells (dendritic cells or macrophages), thus enhancing tumor-specific T cell activation [17]. Herein, we demonstrated that the PG2 enhanced the chemotherapy by stimulating host immunity by reducing the expression of tumor surface PD-L1 expression. The advantages of PG2 are in overcoming tumor immune evasion and enhancing chemotherapy. PG2 has a proven ability to inhibit tumor growth in vivo; however, the detailed mechanism for this still requires further investigation. The patients with tumor metastasis injected with PG2 improved their quality of life and reduced the expression of proinflammatory cytokines [18]. Meanwhile, PG2 promoted the maturation of dendritic cells and reduced M2 macrophage population in patients with lung cancer [19]. Recently, PG2 suppressed tumor growth and metastasis and potentiated cisplatin effect by increasing M1 macrophage activity, reducing angiogenesis, and cancer stem cell population [19]. There is interest in looking for their regulation and improving their application, mainly by combination therapies. Because of its strong properties of activating immunity, we believe that PG2 are worth studying and applying to antic immunotherapy.

PG2 affected AKT/mTOR signaling and apoptosis in immune cells. WEHI-3, EL4 cells and T lymphocytes were co-cultured with PG2 (10μg/ml)-treated (A) 4T1 and (B) CT26 cells prior to harvesting. The protein expression was analyzed by Western blotting. Each experiment was repeated three times with similar results. 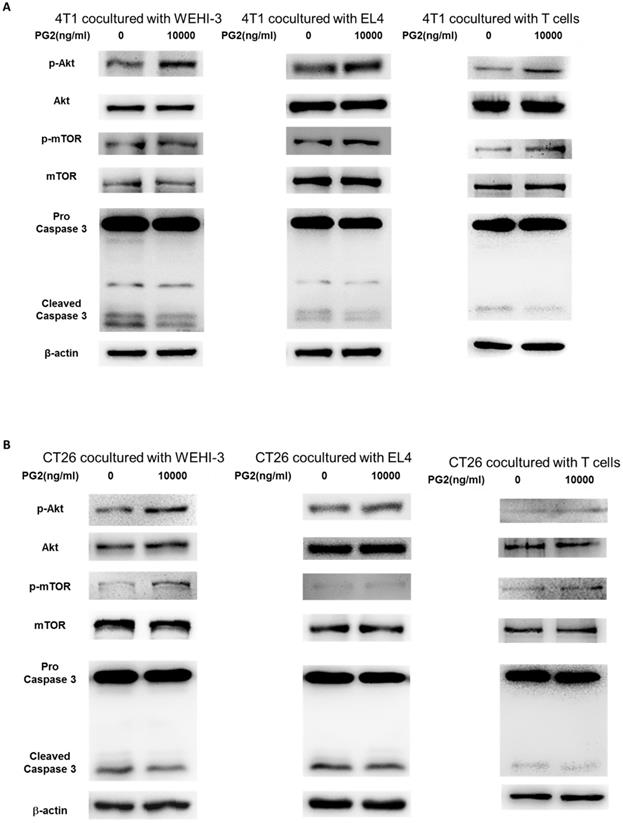