Results: Adenine treatments (0.5 - 2 mM) clearly decreased the cell growth of Hep G2 and SK-Hep-1 cells to 72.5 ± 3.4% and 71.3 ± 4.6% of control, respectively. In parallel, adenine also induced sub-G1 and S phase accumulation in both HCC cells. However, adenine did not affect the cell growth and cell cycle distribution of Hep3B cell. Western blot analysis showed that adenine reduced expression of cyclin A/D1 and cyclin-dependent kinase (CDK)2 and upregulated p53, p21, Bax, PUMA, and NOXA in HepG2 cell. Moreover, adenine induced AMPK activation that was involved in the p53-associated apoptotic cascade in HepG2 cells. Inhibition of AMPK activation or knockdown of AMPK restored the decreased cell growth of HepG2 and SK-Hep-1 cells in response to adenine.

Conclusions: These findings reveal that adenine reduces the cell growth of HepG2 and SK-Hep-1 but not Hep3B cells, attributing to the AMPK/p53-mediated S phase arrest and apoptosis. It suggests that adenine has anticancer potential against p53-wild type HCC cells and may be beneficial as an adjuvant for HCC treatment.

Malignant cancers are life-threaten diseases that contribute to the major mortality of human. Among the various types of cancers, hepatocellular carcinoma (HCC) is the leading cause of death in the patients with liver cancer in Taiwan and in the world (1, 2). Although several targeted anticancer drugs and immunotherapy for HCC have been newly developed in the past decade, the overall survival of patients with HCC is not significantly extended. The high mortality rate caused by HCC may be attributed to the complicated combination of cirrhosis, thrombocytopenia, and neutropenia and a high frequency of chemoresistance, which greatly diminishes the therapeutic effect (3). Therefore, it still needs to develop novel therapeutic strategy with different mechanisms for the improvement of HCC treatment.

In light of the potential antitumor activity of adenine that has been reported, we further investigate the anticancer effects of adenine on HCC cells with emphasis on the possible underlying mechanisms. Cell viability and cell cycle distribution were determined using MTT assay and flow cytometric analysis, respectively. Signaling cascade was demonstrated by using Western blotting. Involvement of AMPK in anticancer potential of adenine was also assessed.

The human HCC cell line HepG2 (HB-8065) and SK-HEP-1 (HTB-52) were acquired from American Type Culture Collection (ATCC; Rockville, MD) and maintained in accordance with recommendations in Dulbecco's modified Eagle's medium (DMEM) supplemented with 10% FBS. Cells reaching to 80% confluency were trypsinized and subcultured into 6-well plates at an initial density of 1x105 cells/mL for the subsequent treatments.

Cells were incubated with serial concentrations of adenine (0.5, 1, and 2 mM) in serum-free DMEM for 24 h. After the incubation, the treated cells were washed with phosphate-buffered saline (PBS; 25 mM sodium phosphate, 150 mM NaCl, pH 7.2) and collected for following analyses. Three independent experiments were performed for statistical analysis.

Cell viability was determined by MTT assay as previously described (12). After treating with adenine or the combination of adenine and specific inhibitor, the culture supernatant was aspirated and the cells were washed with PBS then incubated with MTT solution (0.5 mg/mL) at 37oC for 4 h. The number of viable cells was proportional to the production of formazan which was solubilized with isopropanol and assessed by determining the absorbance at 570 nm using a microplate reader (SpectraMAX 360 pc, Molecular Devices, Sunnyvale, CA, USA).

Cell cycle distribution was analyzed using flow cytometry. At the end of treatment, cells were washed with PBS, collected by centrifugation, and then fixed with 1 ml of ice-cold 70% ethanol. The fixed cells were incubated with the staining solution (20 μg/mL propidium iodide (PI), 20 μg/mL RNase A, and 1% Triton X-100) for 15 min in dark, and then the cells were analyzed using a FACS Calibur system (version 2.0, BD Biosciences, Franklin Lakes, NJ, USA) equipped with CellQuest software. Data from three independent experiments were used for statistical analysis.

AMPKα1 small interfering RNAs (siRNAs, 108454 and s100) and AMPKα2 siRNAs (50583 and s11058) were purchased from Life Technologies and used for AMPK knockdown. siRNAs were transfected into HepG2 and SK-Hep-1 cells in medium containing 10% FBS using Lipofectamine RNAiMax (Invitrogen) according to manufacturer's instructions, and then incubated at 37°C and 5 % CO2 for 72 h.

Data were expressed as means ± standards deviations (S.D.). Statistical significance analysis was conducted by using One-way ANOVA followed by Dunnett for multiple comparisons with the control. The difference with P value less than 0.05 was considered as statistically significant.

Effects of ENERGI-F706 on viability of HepG2, SK-Hep-1, and Hep3B cells

Effects of adenine on cell viability of HepG2, SK-Hep-1, and Hep3B cells. Cells were treated with adenine at serial concentrations (0.5, 1, and 2 mM) for 24 h (upper panel) or 48 h (lower panel), and then the cells were harvested for cell viability assay. Data were expressed as mean ± S.D. from three independent experiments. * and **, P<0.05 and P <0.01 as compared to the PBS control (Ctl).

Effects of adenine on the cell cycle distribution of HepG2, SK-Hep-1, and Hep3B cells. Cells were treated with adenine at serial concentrations (0.5, 1, and 2 mM) for 24 h, and then the cells were harvested for flow cytometric analysis. Individual cell cycle phase was indicated. Data were expressed as mean ± S.D. from three independent experiments. * and **, P<0.05 and P <0.01 as compared to the PBS control (Ctl).

Adenine influenced the cell cycle regulators and induced apoptotic cascade in HepG2 and SK-Hep-1 cells. Cells were treated with 2 mM adenine for 24 h, and then the cells were used for Western blot analysis to determine the levels of proteins. PBS treatment was used as control (Ctl). C-cas 9, cleaved caspase 9 (37 kDa); C-cas 3, cleaved caspase 3 (19 kDa). β-actin was used as internal control. 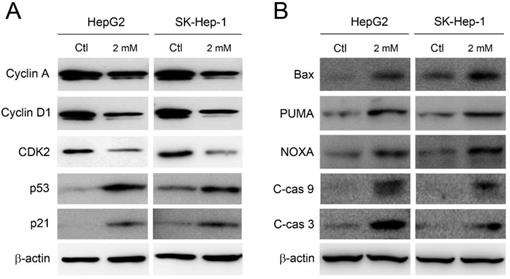 The accumulation at sub-G1 and S phase implies the induction of apoptosis and the disruption of cell cycle. Therefore, the expression of cell cycle regulators and pro-apoptotic components was further investigated. As shown in Figure 3A, the expression level of cyclin A, cyclin D1, and CDK2 was clearly decreased in HepG2 and SK-Hep-1 cells by adenine treatments. Meanwhile, the expression of p53 and its downstream p21 were significantly increased in response to adenine treatment. In parallel, Bax, PUMA, and NOXA, which have been reported to be involved in the p53-mediated apoptosis (13, 14), were clearly upregulated in HepG2 and SK-Hep-1 cells in the presence of adenine (Figure 3B). Moreover, adenine also induced the cleavage of caspase 9 and caspase 3 (Figure 3B). Taken together, these results indicate that adenine alters the expression of cell cycle regulators which may further induce the p53-mediated cell cycle arrest and apoptotic cascade.

Basing on the observation of adenine inducing AMPK-mediated apoptotic signals in HepG2 cells, we further explored the involvement of AMPK activation in the decreased cell viability and accumulated S phase in HCC cells in the presence of adenine. As shown in Figure 5A, 2 mM adenine treatment clearly reduced the cell viability of HepG2 and SK-Hep-1 cells to 78.5 ± 5.1% and 76.3 ± 4.2%, respectively (P<0.01). In addition, by pretreating with dorsomorphin, the adenine-reduced cell viability was restored to 90.7 ± 5.7% and 88.5 ± 4.7%, respectively (P<0.05). Similarly, cell cycle distribution analysis showed that 2 mM adenine treatment resulted in increased S phase ratios from 20.8 ± 2.5% to 41.2 ± 2.8% (P<0.01, HepG2) and from 16.7 ± 2.2% to 36.2 ± 4.3% (P<0.01, SK-Hep-1) (Figure 5B). By pretreating with dorsomorphin, the adenine-increased S phase ratio was lowered to 24. ± 2.6% (P<0.05, HepG2) and 21.7 ± 2.1% (P<0.01, SK-Hep-1) (Figure 5B). Similarly, we silenced the AMPK expression in HepG2 and SK-Hep-1 cells by using specific siRNA, and the results showed that AMPK knockdown significantly restored the cell viability and S phase accumulation in both HCC cells (Figure 5C and 5D). Taken together, these observations show that AMPK activation is involved in the decreased cell viability and the S phase arrest in HCC cells in response to adenine treatments.

Mounting evidences have shown that dysregulation of metabolic pathway, particular the energy sensing, is highly associated with carcinogenesis in several types of carcinomas such as renal cell carcinoma (RCC) and pancreatic carcinoma (15, 16). AMPK plays a pivotal role in sensing and regulating cellular energy level in all eukaryotic species. For example, under nutrient deprivation and hypoxia conditions, low intracellular ATP level induce AMPK activation and the following signaling cascade to promote cellular energy production (17). In addition to energy regulation, AMPK also governs the important cellular physiological activities including cell proliferation, cell growth, and autophagy (18, 19). Accordingly, AMPK has been recognized as an important anticancer target in suppressing the growth of different carcinoma cells such as 786-O (10), K562 (11), and HT29 (20). Similarly, we also observe that adenine-induced AMPK activation play an important role in the growth inhibition of HepG2 and SK-Hep-1 cells which express wild-type p53. On the contrary, adenine dose not influence the growth of p53-deficient Hep3B cell. Accordingly, it suggests that AMPK may act as a potential target to promote the treatments for those HCCs with wild-type p53 expression.

The p53 is tumor suppressors that governs cell cycle progression and play an important role in triggering apoptotic signals and the consequent cell apoptosis in response to various stresses (21, 22). Although p53 induces cell cycle arrest at G0/G1 phase in response to extrinsic stresses, p53 activation also contributes to S phase arrest via p21-mediated inhibition of CDK2 (23). Consistently, our results also show that adenine induces p53 activation, upregulates p21 expression, and decreases CDK2 expression, which may induce the S phase arrest of HCC cells. Cell apoptosis is a primary anticancer effect of most chemotherapy drugs and many anticancer drugs that can induce p53-mediated apoptosis have been developed (24, 25). In addition, previous studies have reported that genetic manipulation of LKB1, an AMPK upstream activator, is essential for the development of HCC (26) and the AMPK/p53 axis is crucial to the metformin-induced apoptosis of HepG2 cell (27). In this study, we demonstrate that adenine induces AMPK activation and the subsequent p53/p21/PUMA pro-apoptotic signaling, leading to the S phase arrest and inhibited cell growth of both HepG2 and SK-Hep-1 cells. These findings not only suggest that adenine possesses anticancer potential against HCC cells with wild-type p53 but also indicate that AMPK/p53 axis may be a promising target to augment the treatments for HCCs with wild-type p53. 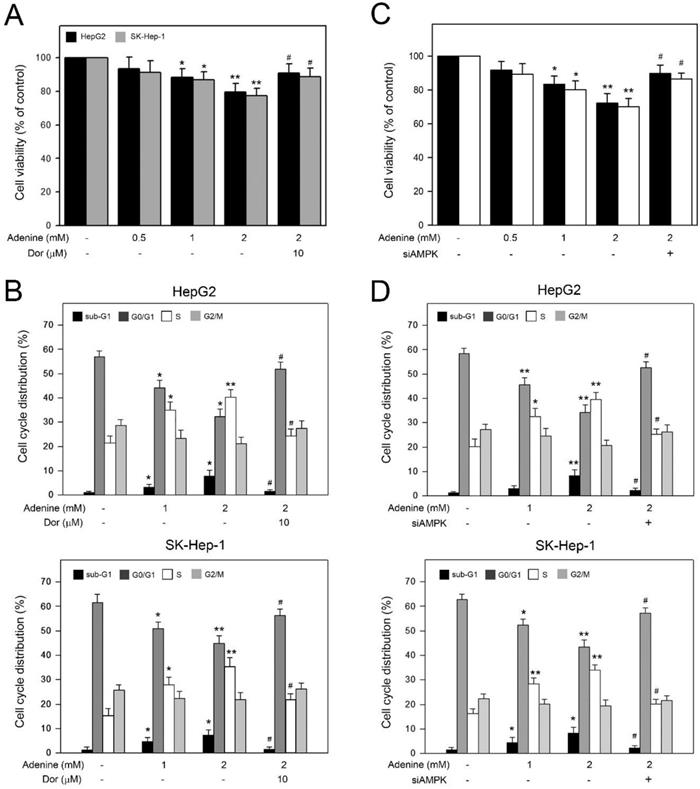 p21 is a cyclin-dependent kinase inhibitor that can be induced by p53 and inhibits cyclin E/CDK2, resulting in G1 phase accumulation. Overexpression of p21 may also inhibit CDK1 and prevent G2/M transition. Moreover, p21 has also been demonstrated to inhibit the kinase activity of cyclin A/CDK2, thereby inhibiting the cell cycle through S phase arrest (28, 29). Therefore, numerus studies have shown that p21 plays a central role in carcinogenesis-associated cell cycle regulation and DNA repair (30). In this study, we observe that inhibition of adenine-induced p53 expression partially reduces the upregulation of p21, suggesting that p53-independent p21 upregulation may also be involved in the adenine-mediated cell cycle inhibition and apoptotic signaling.

This work was supported by grants from the Changhua Christian Hospital, Changhua, Taiwan and Chung Shan Medical University, Taichung, Taiwan (Grant No. CSMU-CCH-106-02).