Skin wound healing is one mechanism that maintains homeostasis in organisms. In general, the wound healing process is classified time-dependently into 4 phases: coagulation and haemostasis phase, inflammatory phase, proliferative phase and remodeling phase [1]. During the proliferative stage, recovery, and restoration of the basal keratinocyte layer in the basement membrane between the epidermis and the dermis begin actively proliferating through various signaling molecules. When a certain level of repair is achieved, the cytoplasmic shape of the keratinocyte is altered to move to the upper layer of the epidermis, differentiate, and transform through different cell layers to reach their final maturation stage. Thus, proliferation and migration of keratinocytes suture the wound site during wound healing [2, 3].

The MAP kinase signaling pathway is important for integrating external signals from mitogens, such as epidermal growth factor (EGF), into signaling events promoting cell growth and proliferation in many mammalian cell types [4, 5]. The MAP kinase signaling pathway is composed of signaling receptors and kinase cascades [6]. In the kinase cascades, ERK1/2, JNK, and P-38 kinases are involved in cell cycle regulation and proliferation. In the presence of an extracellular signal, for instance, growth factors, the signal is transmitted in order through MAPKKK, MAPKK, MAPK, and then the substrates [7, 8].

In the ERK1/2 pathway, signaling is transmitted in order through Raf, MEK1/2, and ERK1/2. As a result, phosphorylated ERK1/2 influences gene expression, which contributes to the regulation of cell proliferation [9-12]. For example, in alkali burn wound recovery, phosphorylation of ERK1/2 has been promoted by the compound body protective compound-157 in human umbilical vein endothelial cells to facilitate proliferation and wound repair [13]. This ERK1/2 pathway is also important in keratinocyte proliferation [13]. 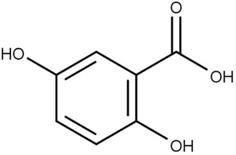 Effect of plant extract compounds on cell proliferation (% of control).

Like sialic acid in plants, gentisic acid has immune activity against viral plant pathogens. Mammals, including humans, obtain gentisic acid by ingesting fruits and vegetables, and gentisic acid is also produced by the metabolic breakdown of aspirin [16, 17].

Gentisic acid has some biological effects, including the inhibition of angiogenesis as an FGF competitive inhibitor [18], skin whitening through melanocyte tyrosinase inhibition [19], and inhibition of low-density lipoprotein oxidation and cholesterol ester hydroperoxide formation [20]. Besides, gentisic acid can be extracted from the African tree Alchornea cordifolia [21] and its extract is effective in wound healing [22].

Cell proliferation assays were performed with the compounds in Table 1 to find the most effective among wounded natural acid compounds. This assay is based on the MTT assay [24, 25]. HaCaT cells (103 cells per well) and CCD-986sk (5×104 cells per well) were seeded into a 96-well plate [26]. The medium was exchanged with a serum-free medium containing various concentrations of gentisic acid (0, 1, 5, 10, 50, and 100 μg/mL) and incubate 24h. MTT (3-(4,5-dimethyl-thiazol-2-yl)-2,5-diphenyltetrazolium bromide, Sigma) dissolved in phosphate-buffered saline (PBS) was added to each well (final concentration of 0.5 mg/ml) and incubated for 3 hours. The medium was removed and cells were suspended in 100μl of DMSO for 10 minutes. The cell proliferation rate was calculated from optical density (OD540) values measured using a microplate reader (BioTek Instruments, Korea). The data was presented as a percentage of the control. The experiments were independently repeated three times [27, 28, 29, 30].

HaCaT cells (3×105 cells per well) were seeded into 6-well plates and cultured to a nearly confluent, cell monolayer (90-100%). Using a 20-200μl pipet tip, a parallel linear wound was generated in the cell monolayer. Floating cell debris was removed by washing with PBS, and the medium was exchanged with serum-free medium containing various concentrations of DMSO (The negative control), allantoin(the positive control) and gentisic acid (0, 1, 5, 10, 50, and 100 μg/ml). Cells were incubated for 24 hours under the same conditions. The wound healing rate was calculated by comparing the images immediately after the scratch and 24 hours after incubation. The data was analyzed using an EVOS XL imaging system (Fisher Scientific, USA). The calculation was done by comparing the distance between wound surfaces with the 0h and 24h results. The experiments were independently repeated three times [25, 27, 31].

After we chose gentisic acid as a potentially effective wound healing compound, we treated HaCaT cells with various gentisic acid concentrations in serum-free medium for 24 hours. We then evaluated the cell proliferation rate using an MTT assay (Figure 2 A). Gentisic acid dose-dependently increased the viability of HaCaT cells. 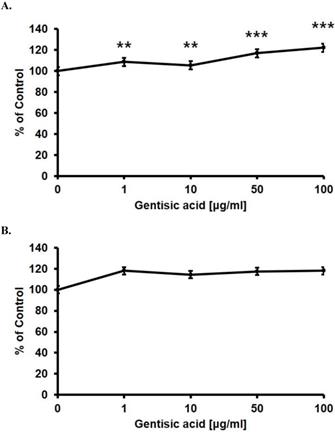 Results of an in vitro wound healing assay after a 24 hour gentisic acid treatment.

Gentisic acid induced ERK1/2 phosphorylation in HaCaT cells. HaCaT cells were treated with various concentration of gentisic acid and the protein extracts were used in Western blot analysis. (A) GAPDH was used as a control. p38, ERK1/2, and JNK, which in their phosphorylated forms are associated with cell proliferation, were detected. (B) p-ERK1/2 was quantified with densitometric analysis and normalized to GAPDH. (* : P < 0.05) 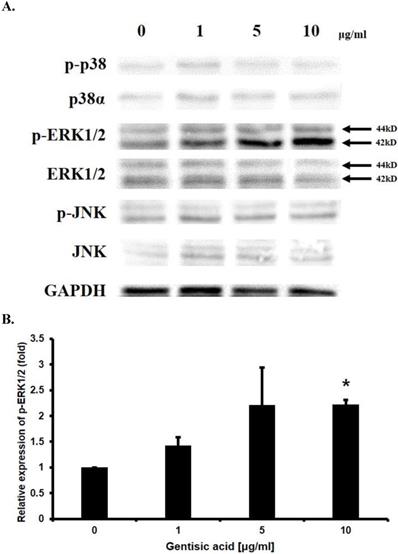 To determine the mechanism underlying the effect of gentisic acid on enhancing HaCaT cell proliferation, Western blotting was performed on p38α, p-p38, ERK1/2, p-ERK1/2, JNK, p-JNK which are known to be involved in cell proliferation (Figure 4A and 4B). The amount of phosphorylated ERK1/2 was increased up to 2.5 times by treatment with gentisic acid. These results indicated that gentisic acid activates the pathway associated with ERK1/2 in the MAP kinase pathway and increases the proliferation of keratinocyte.

Gentisic acid is a natural compound widely present in plants, and many biological studies have been conducted. The plant extract of Alchornea cordifolia, containing gentisic acid, has been used as a traditional African medicine [33] and it has wound healing effects [22]. However, the core component of wound healing effects and its intracellular mechanism have yet to be found. In this study, we showed that gentisic acid positively affects the proliferation of the keratinocyte, HaCaT.

This research was supported by the Basic Science Research Program through the National Research Foundation of Korea (NRF) funded by the Ministry of Education (NRF-2015R1D1A1A01061225).

15. Stilinovic V, Kaitner B. Salts and co-crystals of gentisic acid with pyridine derivatives: The Effect of Proton Transfer on the Crystal Packing (and Vice Versa). Crystal Growth & Design. 2012;12:5763-72