Background: In the last decades, transfusion therapy with allogenic blood has progressively shifted to a more restrictive approach. The current study analyzed the transfusion practice and transfusion-associated factors in a regional trauma center over the course of five years.

Conclusion: Over the course of five years, a restrictive transfusion strategy was implemented within clinical practice in patients undergoing surgery for hip fractures. In parallel, a significant reduction in the hospital LOS and an increased ICU LOS was noted. Whether there is an association between increased ICU LOS and decreasing hospital LOS and whether there is a gender effect on transfusion requirements in patients with surgery for hip fractures should be subject to further research.

A transfusion of packed red blood cells of volunteer donors is a life-saving therapy for patients with anemia or major blood loss. Besides cardiac output and pulmonary oxygen uptake, the number of red blood cells in the circulation determines the blood oxygen carrying capacity and secures vital organ perfusion [1]. Infectious, immunologic, or biochemical complications are seldom but relevant side effects of allogenic blood transfusions that can occur despite the currently high safety standards [2,3]. In recent decades it has become evident that in the perioperative setting, it is outcome-beneficial to rather accept a certain degree of anemia instead of trying to maintain normal values of hemoglobin concentration with allogenic blood transfusions [4]. However, the exact threshold to indicate a blood transfusion remains controversial and depends among others on the presenting disease, patient specific comorbidities, perioperative complications, and resources [5-8].

In 2011, the FOCUS-trail revealed that a higher threshold for blood transfusions (Hb-concentration of 10 g/dl) was not superior in reducing mortality in patients who had undergone surgery for hip fractures compared to a restrictive approach with a lower threshold (Hb-concentration of 8 g/dl) [9]. Moreover, in elderly patients with hip surgery and a high cardiovascular risk, the liberal transfusion strategy was not associated with a reduced in-hospital morbidity compared to the restrictive approach [9]. These findings were concordant with previously obtained data in critically ill patients and from smaller trials [10].

The aim of this study was to analyze how transfusion practice has changed during the years after the paradigm change on transfusion thresholds in patients that underwent surgery for hip fractures in a regional trauma center. In addition, variables and complications associated with an allogenic blood transfusion in patients with a hip fracture were analyzed.

This retrospective observational single-center study was performed in a 595-bed academic teaching hospital. The Department of Trauma and Orthopedic Surgery serves as one of two level one regional trauma referral centers for an area with more than 277,000 inhabitants. The study included all patients admitted with a bony fracture of the thigh requiring surgical treatment from 2010 to 2014. Fractures consisted of medial and lateral, as well as pertrochanteric and subtrochanteric femur fractures and surgical treatment included total hip arthroplasty, a femoral hemiarthroplasty of the hip, or an intramedullary femur nail. Anemia was defined as a hemoglobin-concentration of less than 12 g/dl in females and less than 13 g/dl in males [6].

Patient records in the Department of Trauma an Orthopedic Surgery are kept electronically with a Patient Data Management System (MCC Meierhofer®, Meierhofer AG, Munich, Germany). Demographic patient data, type of injury and surgical treatment, preoperative blood counts, intensive care unit and hospital length of stay, and data on transfusion requirements during the entire hospital length of stay were collected retrospectively. A comorbidity score was defined according to preoperative comorbidities such as dementia, congestive heart failure, stroke, and ataxia. Presence of significant comorbidities was considered when ≥1 of the mentioned comorbidities was present. Thrombembolic events were defined as pulmonary embolism, deep vein thromboembolism, ischemic stroke, and myocardial infarction. Death, thrombembolic events, perioperative pneumonia and urinary tract infection were considered as systemic complications, whereas wound infections and need for revision surgery were considered as surgical complications. The Medical Ethics Committee of the Medical Council Westphalia-Lippe approved this study (number of ethical approval: 2015-497-f-S). Informed consent was waived due to the retrospective and observational nature of the study. 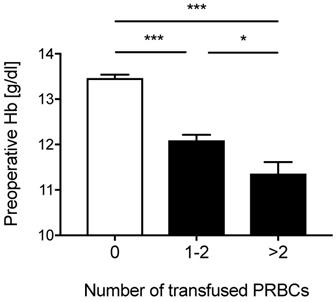 Characteristics of patients admitted with a hip fracture 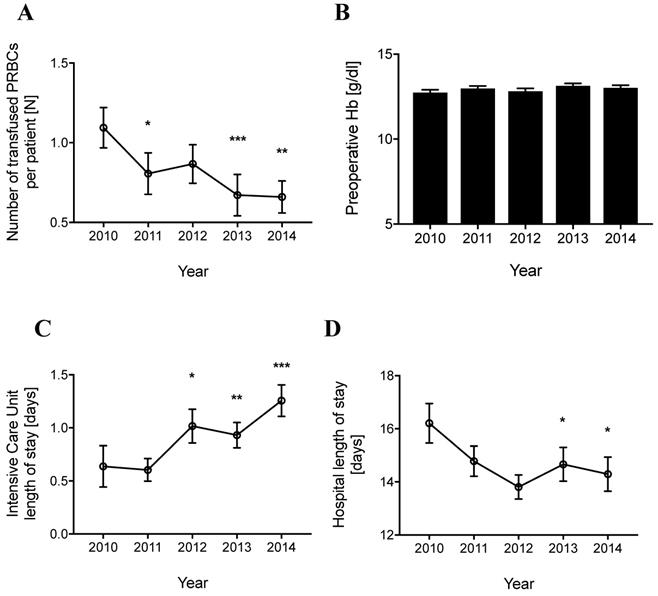 The current evidence of a restrictive transfusion strategy in patients with a hip fracture was implemented into the clinical practice of a regional trauma center in the years after publication of the FOCUS-trail [9]. Parallel to a decrease of the hospital length of stay, the intensive care unit length of stay increased over the years. Furthermore, female sex was associated with decreased transfusion requirements. 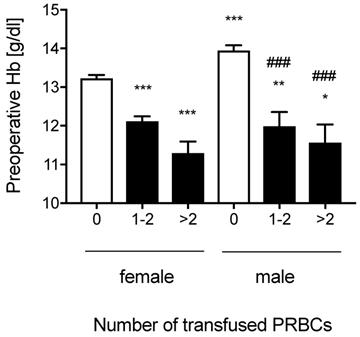 Interestingly, during the same observation period an increase in the average intensive care unit length of stay with a concomitant decrease in the hospital length of stay was noted. One might speculate that patients with lower postoperative hemoglobin levels based on a more restrictive transfusion approach, might receive an extended and closer clinical monitoring during the initial postoperative period. However, the nature of this study does not infer that these effects might be associated with the described change in transfusion practice.

Besides age, preoperative hemoglobin-concentrations are a known and relevant factor for increased transfusion requirements in patients with hip fractures [14]. Generally, females have a higher prevalence of anemia [15]. Likewise, in the studied patient population the preoperative hemoglobin-concentration was significantly higher in males compared to females. In men anemia prevalence increases with age and in geriatric patients it does not differ from anemia prevalence in females any more [15]. In patients that were transfused, preoperative hemoglobin-concentrations did not differ between genders. However, females were transfused less frequently than men, an association that was also supported by the binary logistic regression analysis. These data are in line with findings of another recent study that included patients aged ≥70 years with hip fractures [14]. Therefore it would be interesting whether this gender effect persists in a larger prospective trial. Currently, the gender is not considered as a factor that triggers indications for a blood transfusion and no national or international recommendation on indications for blood transfusions considers gender as a relevant factor to trigger transfusion therapy [4, 16-18].

The current study is limited by its retrospective and single center design. Furthermore, it is likely that other factors besides the increased awareness on transfusion strategies in patients for urgent hip surgery after the FOCUS-trail might have led to a reduction in transfusion requirements over the studied years. However, the national recommendations on indications and triggers for a transfusion with allogenic packed red blood cells were not changed during and after that period [18]. In addition, unknown cofounders might have introduced a bias into the multivariate regression analysis.

Taken together this study indicated that a restrictive approach for the transfusion of allogenic packed red blood cells has been introduced into clinical practice for patients with urgent hip surgery in a regional trauma center in the time frame when the FOCUS-trial was published. Over five years, a significant reduction in the hospital length of stay with an increased length of stay on the intensive care unit was recognized. Whether there is an association between an increased intensive care unit length of stay and a decreasing hospital length of stay and whether there is a gender effect on transfusion requirements in patients with surgery for hip fractures should be subject to further research.