S100A8 and S100A9 are important proteins in the pathogenesis of allergy. Asthma is an allergic lung disease, characterized by bronchial inflammation due to leukocytes, bronchoconstriction, and allergen-specific IgE. In this study, we examined the role of S100A8 and S100A9 in the interaction of cytokine release from bronchial epithelial cells, with constitutive apoptosis of neutrophils. S100A8 and S100A9 induce increased secretion of neutrophil survival cytokines such as MCP-1, IL-6 and IL-8. This secretion is suppressed by TLR4 inhibitor), LY294002, AKT inhibitor, PD98059, SB202190, SP600125, and BAY-11-7085. S100A8 and S100A9 also induce the phosphorylation of AKT, ERK, p38 MAPK and JNK, and activation of NF-κB, which were blocked after exposure to TLR4i, LY294002, AKTi, PD98059, SB202190 or SP600125. Furthermore, supernatants collected from bronchial epithelial cells after S100A8 and S100A9 stimulation suppressed the apoptosis of normal and asthmatic neutrophils. These inhibitory mechanisms are involved in suppression of caspase 9 and caspase 3 activation, and BAX expression. The degradation of MCL-1 and BCL-2 was also blocked by S100A8 and S100A9 stimulation. Essentially, neutrophil apoptosis was blocked by co-culture of normal and asthmatic neutrophils with BEAS-2B cells in the presence of S100A8 and S100A9. These findings will enable elucidation of asthma pathogenesis.

Lung infiltration by neutrophils is a prominent phenomenon in neutrophilic asthma. Inhibition of neutrophil apoptosis prolongs the neutrophil survival, which aggravates clinical features of asthma by maintaining inflammatory responses [8, 9]. Neutrophil apoptosis is regulated by a variety of cytokines such as IL-6, IL-8, GM-CSF, G-CSF, and MCP-1 [10-12]. Airway epithelial cells play important roles in pathogenesis of asthma as structural cells. The relationship of airway epithelial cells and asthma differs, depending on the allergen, virus infection and effective mechanisms [13-15]. Nevertheless, understanding the interaction of immune cells and non-immune cells is essential in unveiling the pathogenic mechanism of asthma and developing a therapeutic strategy [16].

Our previous paper demonstrates that S100A8 and S100A9 in BALF and serum of asthma subjects are significantly related to increased serum IgE, and they directly inhibit the neutrophil apoptosis via TLR4, Lyn, PI3K, AKT, ERK, and NF-κB [17]. In this study, we investigate whether S100A8 and S100A9 induce the cytokine secretion of airway epithelial cells, which affects neutrophil apoptosis of normal and asthmatic subjects.

Cells were lysed in cytosolic lysis buffer (TransLab, Daejeon, Korea). After centrifugation, the supernatant was collected and protein concentration of the lysate was measured by a protein assay kit (Thermo scientific, Waltham, MA, USA). Protein samples were loaded on 10% SDS-PAGE gel, separated by electrophoresis and transferred to nitrocellulose filters. The membranes were then probed with primary antibodies, after which the blots were incubated with appropriate secondary antibodies, including goat anti-mouse or rabbit antibodies. The blots were developed with the enhanced chemiluminescence detection system (Amersham Pharmacia Biotech.), and detected by Chemi-Doc TM touch imaging system (Bio-Rad, Richmond, CA, USA).

DNA-binding activity of NF-κB was evaluated using the EZ-DetectTM transcription factor kits for NF-κB p65 (PIERCE, Rockford, IL, USA), according to the manufacturer's instructions. Both wild type and mutant NF-κB oligonucleotides were used as negative controls. Chemiluminescent detection was performed using a luminometer.

Detection of TLR4 and apoptosis

BEAS-2B cells were treated with S100A8 and S100A9 in a time-dependent manner. The cells were collected and washed with PBS three times. To prevent non-specific binding of antibody, the cells were incubated with 0.5% BSA blocking solution. After incubation with antibody against TLR4, cells were washed and incubated with FITC-labeled secondary antibody. Baseline fluorescence was acquired by adding normal mouse IgG instead of primary antibody. The annexin V-fluorescein isothiocyanate (FITC) apoptosis detection kit (BD Biosciences) was used to determine apoptosis of neutrophils and eosinophils. Briefly, isolated neutrophils and eosinophils were treated with the S100A8- or S100A9-stimulated supernatant, followed by subsequent incubation with FITC-labeled annexin V and propidium iodide (PI) for 15 min at room temperature. The resultant fluorescent intensity of the cells was analyzed by the FACSort cytofluorimeter (BD Biosciences). Annexin V+/PI- and annexin V+/PI+ cells are considered as apoptotic cells.

Isolation of neutrophils and eosinophils

Human neutrophils and eosinophils were isolated from peripheral blood of normal and asthmatic subjects using Ficoll-Hypaque solution and a CD16 microbeads magnetic cell sorting kit (Miltenyi Biotec, Bergisch Gladbach, Germany). After removal of erythrocytes by hypotonic lysis buffer, the neutrophils were washed with PBS three times and cultured in RPMI 1640 containing 10% fetal bovine serum (FBS). This study was approved by the Institutional Review Board of Eulji University for normal volunteers, and by the Institutional Review Board of Eulji University Hospital for asthmatic patients. Written informed consent was received from study volunteers before blood collection.

Data are presented as the means ± SD. A paired t-test and one-way ANOVA was used for comparing two-groups and more than two groups, respectively, using the SPSS statistical software (Chicago, IL, USA). p <0.05 is considered significant. 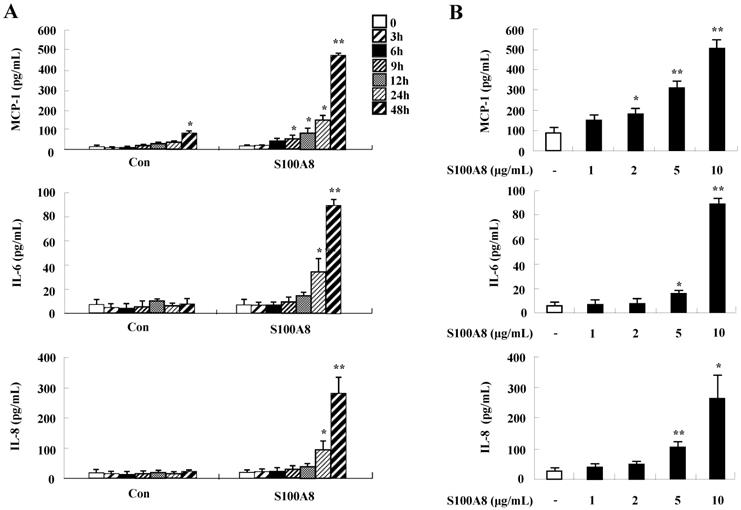 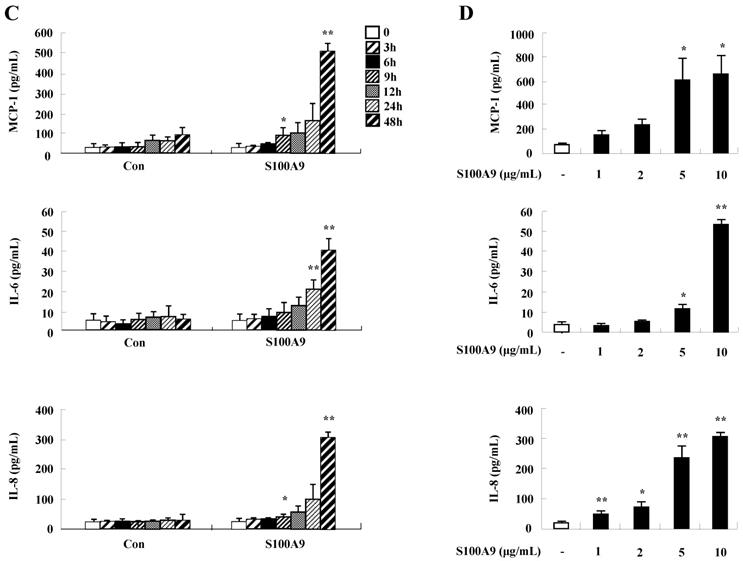 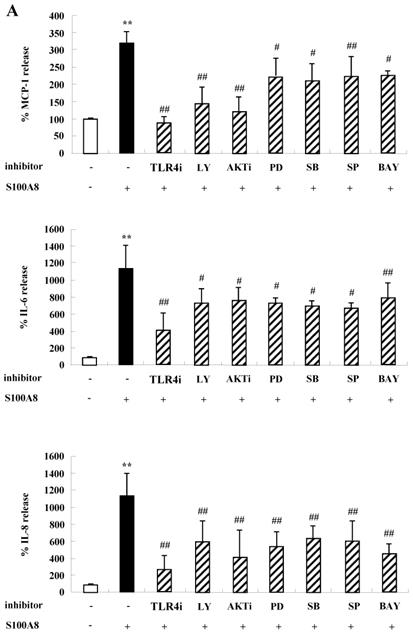 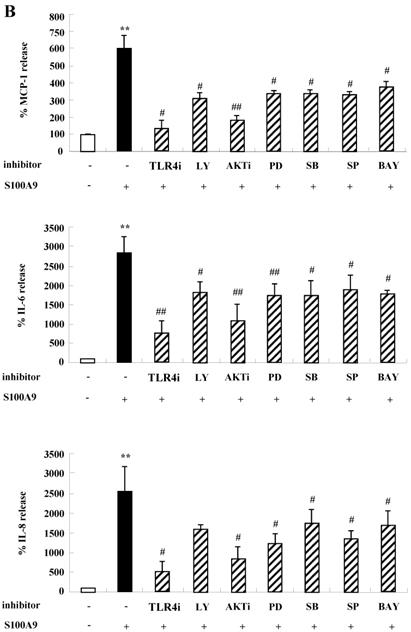 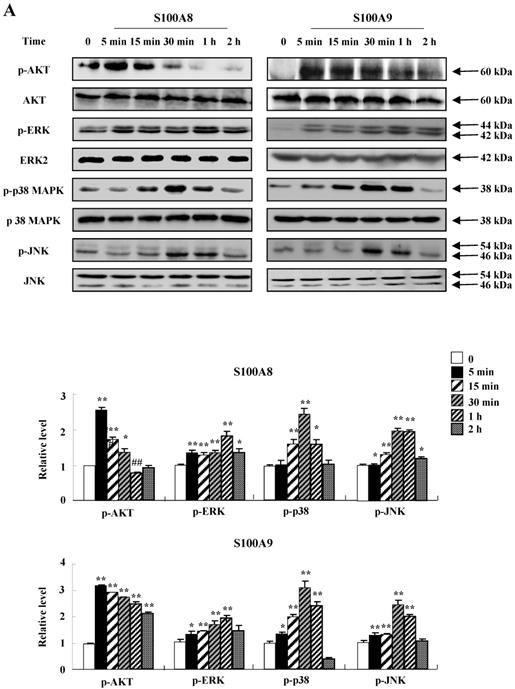 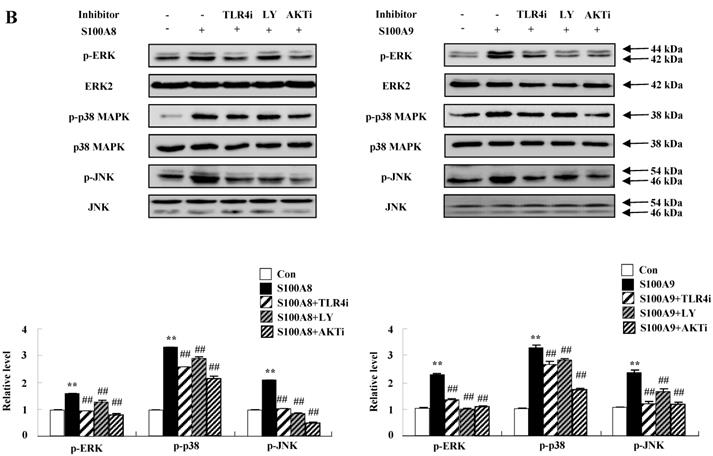 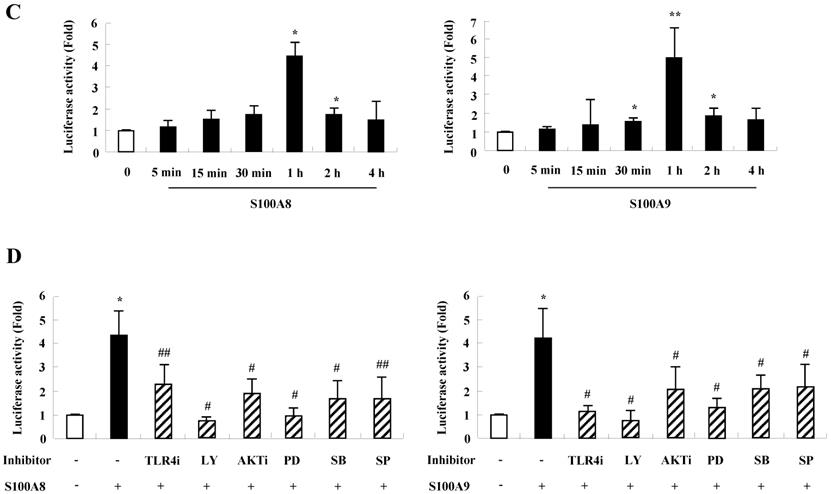 Constitutive apoptosis of normal neutrophils is delayed by released molecules due to S100A8 and S100A9 in BEAS-2B cells. (A, B) BEAS-2B cells were incubated with or without 10 μg/mL of S100A8 and S100A9 for 48 h. The supernatant (Sup) was collected and added to the fresh neutrophils (A) (n=3) and eosinophils (B) (n=3) isolated from peripheral blood. Apoptosis of neutrophils and eosinophils was evaluated by measuring the binding of annexin V-FITC and PI. (C, D) Neutrophils were incubated with the S100A8 and S100A9-treated supernatant (Sup) of BEAS-2B cells. Expression levels of cleaved caspase 9 and caspase 3 (C), and MCL-1, BCL-2, and BAX (D) were detected by Western blotting. Densitometric data are presented relative to the negative control, set at 1 (lower panel). (E, F) Normal neutrophils (n=4) and BEAS-2B cells (1:1, 1:2, and 1:4 ratio) were incubated for 24 h in the absence or presence of S100A8 (E) and S100A9 (F) (10 μg/mL). Neutrophil apoptosis was analyzed by measuring the binding of annexin V-FITC and PI. Data are presented relative to the control, set at 100%, as the means ± SD. *p < 0.05 and **p < 0.01 indicates a significant difference between the control and S100A8- or S100A9 treated groups. 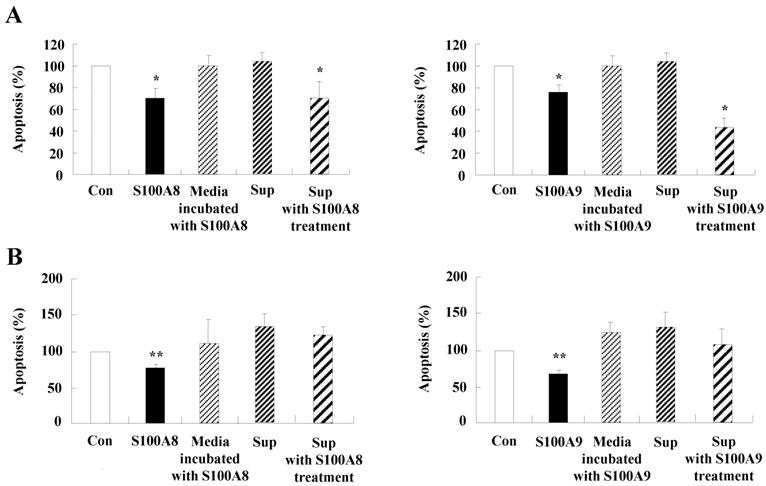 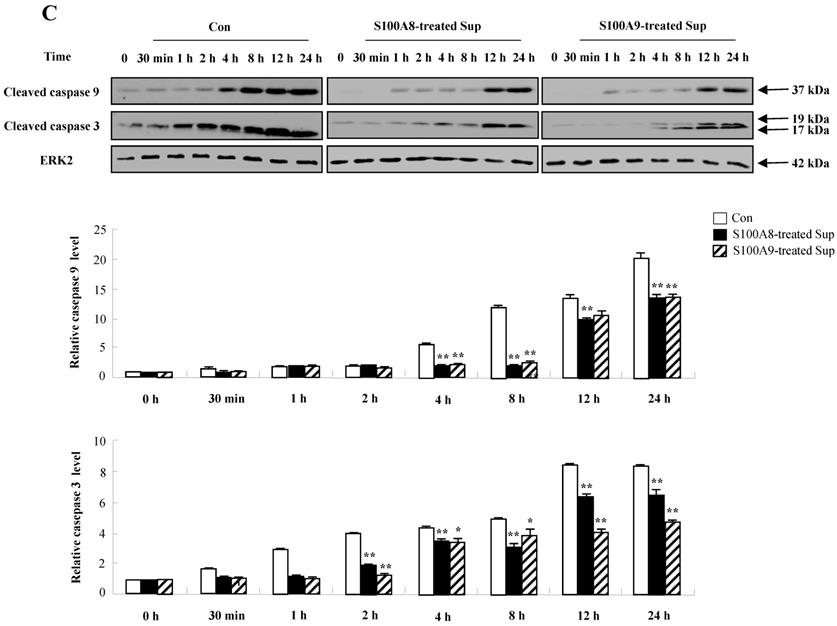 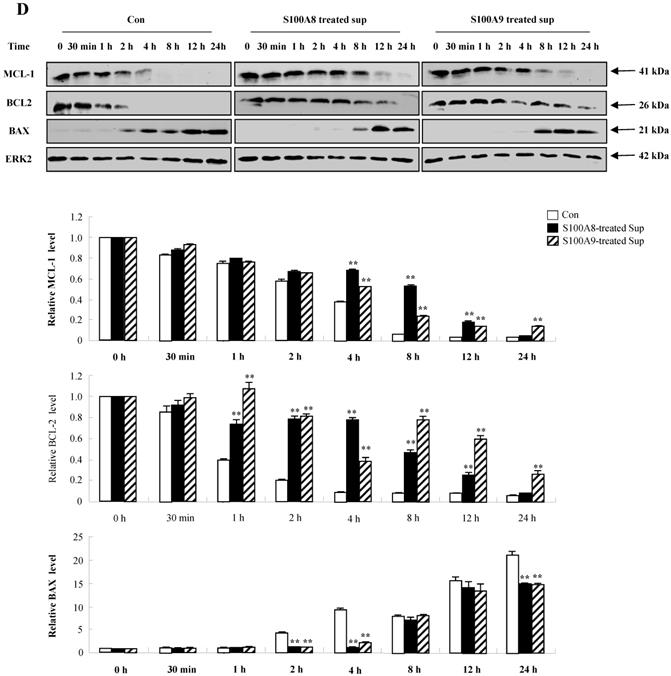 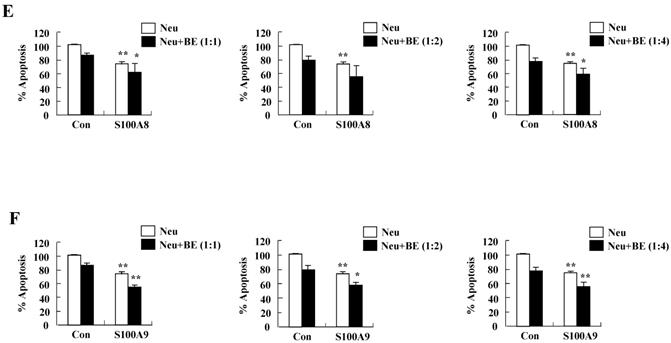 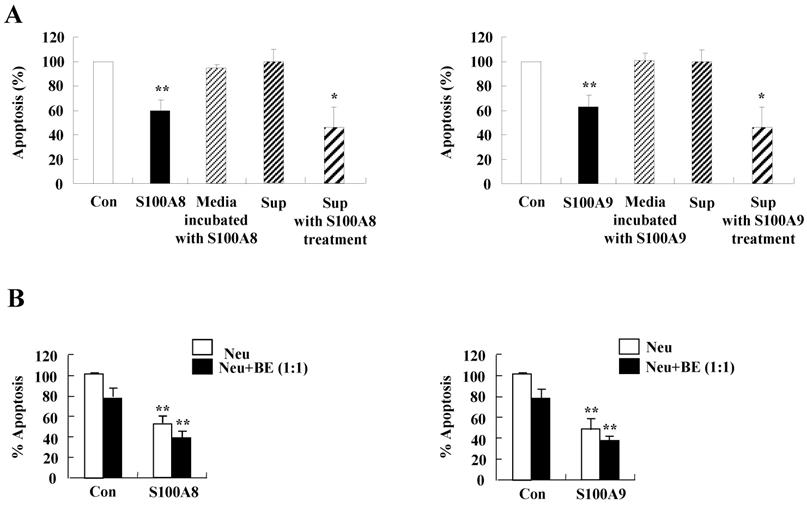 Both S100A8 and S100A9 are essential proteins of the S100 family proteins and play important roles in allergies, such as asthma [20]. Our previous and present results reveal that neutrophil apoptosis is suppressed by not only S100A8 and S100A9 but also the secondary response, namely, cytokine release secreted by S100A8 and S100A9 [17] (Fig. 1). Bronchial epithelial cells are important cytokine producers. As shown in Figs. 1, 5, and 6, they enhance the production of MCP-1, IL-6, and IL-8, resulting in the subsequent suppression of neutrophil apoptosis. Bronchial cells express various cytokines that regulate the Th1, Th2, and Th17 immune responses [21, 22]. A recent study reported that S100A9 triggers the development of neutrophilic inflammation by elevation of IL-1β, IL-17 and IFN-γ, and induces allergen-induced Th2 type inflammation by production of thymic stromal lymphopoietin (TSLP) and IL-2 production [23, 24]. In contrast, S100A9 prevents the Th2-mediated asthmatic inflammation induced by Alternaria alternata extract in S100A9 knockout mice [25]. Even though the knockout mouse model has a merit that target proteins are systemically depleted, it is difficult to determine alterations of the local inflammatory environment, including early eosinophilic and late neutrophil asthma stage, and to directly compare the mouse experiment with human study. Based on the results of the current study, we believe the role of S100A8 and S100A9 in the lung may be dependent on stimulators such as allergen, bacteria, and fungus.

In conclusion, this study demonstrates that MCP-1, IL-6 and IL-8 are increased after exposure to S100A8 and S100A9 in BEAS-2B cells, through the PI3K/AKT/MAPK/NF-κB pathway. The increased cytokines delay constitutive neutrophil apoptosis. S100A8 and S100A9 trigger the interactive network between the BEAS-2B cells and neutrophils through cytokine secretion and apoptosis. We believe that these findings will pave the way for better understanding the pathogenesis of asthma.

This research was supported by EMBRI Grants 2018EMBRIDJ0005 from the Eulji University. We thank all normal volunteers and asthma patients who participated in this study.

32. Sackesen C, Karaaslan C, Keskin O. et al. The effect of polymorphisms at the CD14 promoter and the TLR4 gene on asthma phenotypes in Turkish children with asthma. Allergy. 2005;60:1485-92