Background: ISGylation is the conjugation of ISG15 with target proteins. ISGylation occurs through an enzymatic cascade, which is similar to that of ubiquitination. Through ISGylation, ISG15 can bind to proteins involved in cell proliferation and differentiation, thus promoting genesis and progression of malignancies. The present study aims to investigate expression of genes involved in ISGylation and ubiquitination in patients with hepatocellular carcinoma and to correlate gene expression with clinical laboratory parameters of these patients.

Conclusions: EFP, HERC5, UBA1, and USP18 genes are upregulated in tumour tissues of patients with HCC and, thus, may be associated with the pathogenesis of hepatocellular carcinoma.

Hepatitis B virus (HBV) infection is responsible for up to 90% of hepatocellular carcinoma (HCC) cases, especially in regions with a high prevalence of HBV infection including Vietnam [1, 2]. HCC accounts for 75-85% of primary liver cancer and is the fourth leading cause of cancer-related deaths. Annually, 841,000 new cases and 782,000 deaths are reported worldwide [2]. The number of HCC-related deaths is increasing and estimated to reach a prevalence of one million by 2030 [3]. HBV infection can cause HCC through direct interaction of viral factors (e.g. HBV-DNA, HBx protein) with host cells, causing instability of human chromosomes and induction of oncogenes. Indirect mechanisms result from inflammation of hepatocytes, fibrosis and modification of cellular signalling involving the JAK/STAT and Wnt/β-catenin pathways [4].

In response to HBV infection, immune cells secrete interferon (IFN) and other inflammatory cytokines. Subsequently, cellular signalling pathways are activated and IFN-stimulated genes (ISGs) are induced [5]. Among the ISGs, ISG15 is a key effector molecule of the innate immune system. ISG15 is induced by type I interferon and lipopolysaccharides and has antiviral activity against many viruses [6]. It plays also an important role in several immunomodulatory activities, including induction of NK cell proliferation, triggering T cell responses, augmentation of lymphokine-activated killer (LAK) activity, stimulation of IFN-γ production, inducing dendritic cell (DC) maturation and acting as a chemotactic factor for neutrophils [7, 8]. ISG15 exists both as a free form and/or in conjugation with other proteins. The conjugation of ISG15, ISGylation, occurs through an enzymatic cascade through which ISG15 can modulate the functions of pathogenic and host proteins and affect downstream signalling pathways [9]. Initially, the activation of the E1 enzyme (ubiquitin-like modifier-activating enzyme 7; UBA1 or UbE1L) forms a thioester bond with free ISG15 in an ATP-dependent manner [7]. ISG15 is then transferred to the ubiquitin/ISG15-conjugating enzyme E2 L6 (UBE2L6 or UbcH8). Finally, E3 ligases catalyze the conjugation of ISG15 with lysine residues of target substrate proteins, a process which may be reversible (deISGylation) by the activity of the ubiquitin-specific protease 18 (USP18) [6].

ISGylation has multiple functions, including inhibition of release of exosomes, downregulation of protein translation and regulation of distinct protein functions [10]. In cancer, ISGylation has been shown to target p53, a tumour protein, and control its stability and functionality [11]. Through ISGylation, ISG15 is associated with the formation, development and progression of several malignancies such as breast, lung and ovarian cancers [12-14]. Several enzymes involved in the ISGylation process are associated with cancers in both an ISGylation-dependent and ISGylation-independent manner. Particularly, the HECT domain and the RCC1-like domain-containing protein 5 (HERC5) and estrogen-responsive finger protein (EFP or TRIM25), known as E3 ligase of ISGylation have been shown to be associated with liver, breast prostate, endometrial and ovarian cancers [15-18]. USP18 is also involved in the development of breast, lung and liver cancers [19-21]. A study has indicated that USP18 contributes to controlling carcinogenesis, as loss of USP18 function increases apoptosis and decreases cell proliferation by destabilization of the cyclin D1 protein [22].

It remains, however, unclear so far whether the EFP, HERC5 and USP18 genes contribute to tumourigenesis through ISG15/ISGylation or other mechanisms. In addition, the exact role of ISG15 and other key enzymes involved in ISGylation in the formation and development of HBV-related HCC is still unclear. In the present study, we aim to investigate the expression profiles of genes encoding enzymes involved in the ISGylation process (EFP, HERC5, UBA1, UBC USP18) in patients with HCC and their association with clinical outcomes.

The study included 38 patients with HCC who underwent surgery at the 108 Military Central Hospital in Hanoi, Vietnam. The patients were diagnosed according to the guidelines of the American Association for the Study of Liver Diseases (AASLD) for management of HCC [21]. HCC was confirmed by computed tomography (CT) imaging and/or by histology and classified based on the Barcelona Clinic Liver Cancer (BCLC) classification system [26]. HBV and HCV infections were assessed in order to determine the etiology of the disease. Liver tissue specimens collected from the HCC patients included tumour and adjacent non-tumour specimens; the samples were and frozen at -800C until further use. Patients were further grouped as Child-A, Child-B or Child-C according to Child-Pugh scores [22]. Laboratory parameters involving blood counts, total and direct bilirubin, prothrombin, albumin, alanine transaminase (ALT), aspartate transaminase (AST), and the tumour marker alpha-fetoprotein (AFP) were assessed by routine laboratory tests. The baseline characteristics of the 38 HCC patients including age, gender and the laboratory results are shown in Table 1.

All details of the study were explained to the participants and informed written consent was obtained before taking samples. All clinical procedures and experiments were performed in accordance with applying guidelines and regulations. The study was approved by the Institutional Review Board of the 108 Central Hospital, Hanoi, Vietnam.

Total RNA was extracted from the 38 tumour and adjacent non-tumour tissue pairs by Trizol reagent (Life Technologies, Carlsbad, CA, USA) according to the protocol recommended by the manufacturer. Extracted total RNA samples were reverse transcribed into cDNA by using the QuantiTect Reverse Transcription Kit (Qiagen, Hilden, Germany). cDNA was quantified by real-time PCR with GAPDH (glyceraldehyde-3-phosphate dehydrogenase) used as reference gene. Sequences of primers used in this study are presented in Table 2. Quantitative realtime PCR reactions were carried out in a volume of 25 μl containing 12.5 μl 2x SYBR Green PCR master mix (Bioline, Luckenwalde, Germany), 0.5 µM primer pairs specific for the target genes and the reference gene, 5 ng cDNA samples and RNase-free water up to the 25 μl reaction volume. Thermal cycling conditions were 95 °C for 2 minutes for initial activation, followed by 45 cycles of denaturation at 95 °C for 5 sec and annealing and extension at 58 °C for 20 sec. Melting curve analyses starting from 58 °C to 85 °C were performed after each run to confirm specificity of the PCR products. All reactions were performed in duplicates and repeated twice using the LightCycler® 480 real-time PCR system (Roche, Basel, Switzerland). Relative expression of target genes was normalized to the expression of GAPDH based on the ΔCt method.

Primers used for this study

We then examined whether gene expression was associated with progression of HCC by comparing their expression between different BCLC stages. However, expression of the genes did not differ between stage A and B HCC tissues as well as between the corresponding non-tumour tissues (P>0.05). BCLC stages C and D did not occur among the study participants. 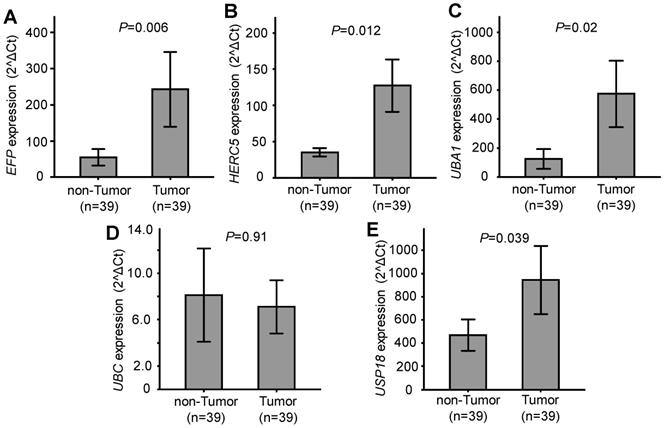 Correlation of mRNA expression between genes 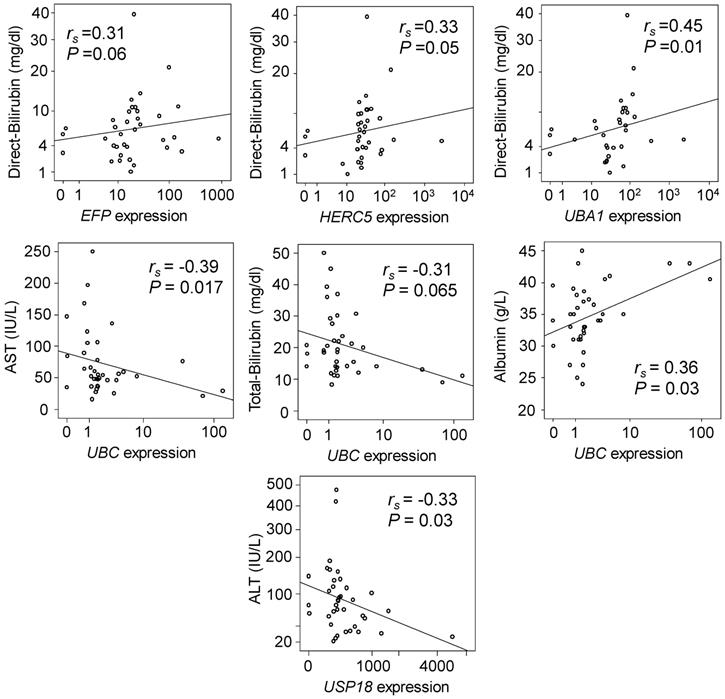 ISGylation plays a key role both in immunity against infections and in the formation and progression of tumours by affecting a wide range of target proteins [10]. A number of enzymes involved in the ISGylation process, namely E3 ligases (HERC5 and EFP/TRIM25) and USP18 have been shown to be associated with cancers via ISGylation-dependent and -independent mechanisms [15-18]. We have previously shown that ISG15 expression is associated with HBV-related liver diseases, including HCC [23]. Here we show that expression of E3 ligases (HERC5 and EFP/TRIM25), UBA1 and USP18 is significantly upregulated in HCC tumours compared to adjacent non-tumour liver tissues. In addition, the expression levels of the genes in non-tumour tissues is associated with several clinical parameters. Our results indicate that E3 ligases, UBA1 and USP18 are associated with HCC development and may possibly be considered as targets in the treatment of HCC.

The upregulation of EFP, HERC5, UBA1 and USP18 in HCC tissues and the different patterns of correlation of the genes in HCC tumour and in adjacent non-tumour tissues suggest that these genes may play a role in the pathogenesis of HCC. Studies have shown that EFP is closely associated with breast cancer [6, 24]. EFP regulates metastasis of breast cancer through its E3 ubiquitin ligase activity rather than through estrogen signalling [24]. Expression of EFP is upregulated in breast and gastric cancers but downregulated in endometrial cancer [15, 25, 26]. High EFP expression is associated with a poor prognosis of breast cancer [25], associated with advanced disease in human epithelial ovarian cancer [16], and high EFP expression is a prognostic factor in prostate cancer [26]. It has also been shown that EFP increases proliferation and survival of prostate cancer cells by affecting p53 signals [26]. EFP is also associated with HCC progression through degrading the metastasis-associated 1 protein (MTA-1) [27, 28]. Here we show that EFP is significantly upregulated in HCC tissue compared to non-tumour liver tissues and EFP expression in non-tumour tissues is correlated with the levels of direct bilirubin.

HERC5 is the dominant E3 enzyme for ISGylation and has been shown to be highly expressed in HCC tissues and in vitro [18]. It contributes to immune evasion in HCC and may be a prognostic biomarker for recurrent HCC after liver transplantation [17]. In line with a previous study [18], we also observed upregulation of HERC5 in HCC tumour tissues and a correlation of HERC5 expression with direct bilirubin levels in non-tumour tissues. Although UBA1 has been considered as a potential target gene for cancer therapy, especially for acute myeloid leukemia [29], the role of this gene in the pathogenesis of HCC had not been elucidated so far. To the best of our knowledge, this study for the first-time analyses UBA1 expression in HCC tumour and adjacent non-tumour tissues and points towards its correlation with direct bilirubin levels.

In agreement with a previous report [21], our study also shows that USP18 is significantly upregulated in HCC tissues compared to corresponding non-tumour tissues. USP18 is an important factor in the immune response directed against HBV replication and its overexpression promotes growth of HCC cells [21]. Our results underline the crucial role of USP18 in HCC tumourigenesis; however, the exact mechanism by which USP18 is involved in HCC development remains unclear, as USP18 exhibits diverse functions. It influences cell cycle progression by interacting with S-phase kinase-associated protein 2 (SKP2) [30] and plays an important role in inhibition of HBV replication through activation of the JAK/STAT signalling pathway [31], independent of ISG15 and ISGylation [32]. Recently, expression of USP18 mRNA in peripheral blood mononuclear cells (PBMCs) has been proposed as a predictive factor for monitoring treatment of HBV patients with interferon-alpha [33]. Another mechanism by which USP18 might contribute to tumour formation and progression in lung cancer is that USP18 can influence functionality of the cyclin D1 and KRAS proteins [20, 22]. Although USP18 has been shown to inhibit tumourigenesis [34], further studies are required to describe in more detail the precise role of USP18 in HBV-related HCC.

UBC expression is upregulated in lung cancer [35]. Although the relative expression of UBC does not differ significantly between HCC tumour and non-tumour tissues, UBC expression in non-tumour tissues is correlated with AST levels, total bilirubin and albumin, indicating that UBC may not significantly contribute to the pathogenesis of HCC, but rather plays a role in liver functions. Limitations of this study apply to the rather small number of HCC patients, particularly the small number of HCC patients in BCLC stages C and D, implying the impossibility to perform association analyses of gene expression with HCC progression.

In conclusion, our study shows that expression of EFP, HERC5, UBA1 and USP18 genes, upregulated in tumour tissues of HCC patients, is correlated with liver function parameters and, thus, may be associated with the pathogenesis of liver cancer.

We would like to thank all patients for their participation. This study was funded by the Vietnam National Foundation for Science and Technology Development (NAFOSTED; grant number 108.02-2017.15) to Hoang Van Tong. The funder has no role in the study design, data collection and analysis, decision to publish or preparation of the manuscript.