E2F3, a member of the E2F family, plays a critical role in cell cycle and proliferation by targeting downstream, retinoblastoma (RB) a tumor suppressor family protein. The purpose of this study, was to investigate the role and function of E2F3 in vivo. We examined phenotypic abnormalities, by deletion of the E2f3 gene in mice. Complete ablation of the E2F3 was fully penetrant, in the pure C57BL/6N background. The E2f3+/- mouse embryo developed normally without fatal disorder. However, they exhibited reduced body weight, growth retardation, skeletal imperfection, and poor grip strength ability. Findings suggest that E2F3 has a pivotal role in muscle and bone development, and affect normal mouse growth.

E2F transcription factors (E2Fs) are found in most cell types of the body and contribute to cell cycle progression, cell proliferation, differentiation, and apoptosis processes [1]. These E2F transcription factors are potent regulators of a variety of genes, including cell-cycle checkpoints controlling genes in mammalian cells [2]. Until now, eight members have been characterized, E2F1 to 8, and they are generally classified into transcriptional activators (E2F1-3) and repressors (E2F4-8) [3, 4]. Some of these E2F family members have also a key role, in myeloid development and cardiac neovascularization [5, 6].

For transcriptional regulation, dimerization partner (DP) family and retinoblastoma (RB) family collaborate with E2Fs, by binding to E2F proteins. DP proteins identified DP1-3 form a heterodimer with an E2F, and allow it to bind to target promoters [7, 8]. RB family (pRB, p107, and p130) can bind to activation domains on the E2F1-5, and formed E2F/RB complex [1]. This complex on the promoters gives rise to repression of target genes in a cell cycle dependent manner, through epigenetic modification as well as by physical blocking [9-11]. Not all functions of the E2Fs are Rb-dependent. E2F3 protein also has functions, unrelated to Rb proteins [12, 13].

The E2F3 is expressed ubiquitously, like other E2F family members [14]. However, unlike other E2F family members, the E2F3 locus encodes two gene products, E2F3a and E2F3b, originating from two different promoters. They share the most coding sequence, such as the DNA binding domain and activation domain, as they possess a unique first exon [15]. Two types of the E2F3 isoform are different in expression, because of distinct promoters. E2F3a protein, the long one, is produced like E2F1 and E2F2. E2F3a promoter is expressed highly at G1/S transition, and is regulated by E2F-mediated negative feedback and Myc protein. In contrast, E2F3b promoter is not affected by E2F/Myc-mediated regulation mechanisms, and remains active throughout the cell cycle [15, 16].

E2F3 protein is a key factor in overall biological functions, as it regulates cell cycle progression. Additionally, E2F3 has played a key role in diverse biological processes such as lens development, cardiac neovascularization, DNA damage responses, neuronal migration, and myogenesis [6, 13, 17-21]. Dysregulation of E2F3 is closely related to carcinogenesis, and recent studies confirmed that overexpression of miRNAs targeting E2F3, inhibits cell migration and proliferation in many tumors [22-28]. E2F3 is considered a promising prognostic marker in specific carcinomas [27, 29, 30].

Given the significance of the E2F3 in key biological processes, we showed its effects on mouse phenotype using in vivo study. In this study, we investigated phenotypes of E2f3 null mutant (E2f3-/-) mouse in the C57BL/6N background. All E2f3-/- embryos were dead in the uterus or soon after birth, and we only obtained hetero mutant (E2f3+/-) mice. Also, we observed growth retardation and musculo-skeletal imperfection in E2f3+/- mice, supporting the key role of E2F3 after birth.

E2f3 gene knockout mouse was produced by Korea Mouse Phenotyping Center (KMPC) using a mouse embryonic stem cell clone with mutant E2f3 gene (E2f3tm1a(KOMP)Wisi) (EPD0034_2_C11, KOMP repository, CA, USA) obtained from the Mouse Biology Program at UC Davis. We produced the tm1b mutant mouse from the tm1a mutant mouse using HTN-Cre protein (HTN-Cre, Excellgen, USA) as described in the previous paper [31]. The tm1b genotype mice, were expanded for all studies. The care and use of all mice used in this study, were in accordance with the IACUC at KRIBB (KRIBB-AEC-17050).

All mice obtained by mating female and male E2f3+/- mice were genotyped at 3 weeks of age. After grouping according to their sex and genotype, weekly body weight measurements were conducted for all the animals from 4 to 16 weeks of aged.

At age 16 weeks, all the mice were autopsied after anesthesia with intraperitoneal injection of avertin. Before abdominal opening, blood was collected through a heart puncture with EDTA-treated tube (BD Microtainer, NJ, USA). Blood was used for hematology, blood chemistry. Hematological analysis was performed with a Cell-Dyn 3700 hematology analyzer (Abbott Laboratories, IL, USA). Blood biochemistry was conducted with a Hitachi 7020 automatic analyzer.

Data were presented as the mean and standard deviation. All statistical differences between groups were analyzed by Student's t-test using a statistical program (GraphPad Prism 7.04, San Diego, CA). P<0.05 was considered as significant.

To validate the role of E2F3 in mouse development, we mated the E2f3 heterozygous mutant C57BL/6N mice. However, we couldn't observe viable E2f3-/- neonates, only E2f3+/+ and E2f3+/-animals were obtained (Table 1). In the previous study that investigated viability of the E2f3 mutant mouse, all the E2F3-/- 129/Sv embryos were dead. But C57BL/6

129/Sv mixed mice survived partially, suggesting that E2f3 is an essential gene for embryonic viability in a strain-specific manner [19]. Our data also indicate that deletion of E2f3 affect embryo survival in C57BL/6N background and that the heterozygosity of E2F3 gene is enough for the survival in the mice.

Analysis of progeny, arising from mating of E2F3+/- mice in the C57BL/6N background.

Although E2f3+/- animals were born ordinarily, they showed immature phenotype. We conducted various phenotypic analysis for E2f3+/- animals, to investigate effects of partial E2f3 defects after birth. Weekly body weight measurements were conducted, after weaning until age 16 weeks. Our data indicates that female and male E2f3+/- mutant mice had shown significantly lower body weight than wild mice throughout the measurement period, suggesting E2f3 is responsible for development as well as maturation in mice (Fig. 1). 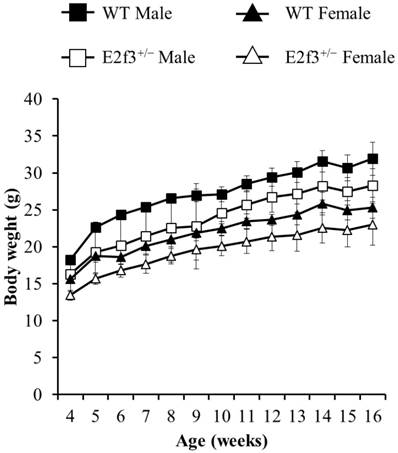 Analysis of muscle strength in male/female E2f3+/- and wild mice 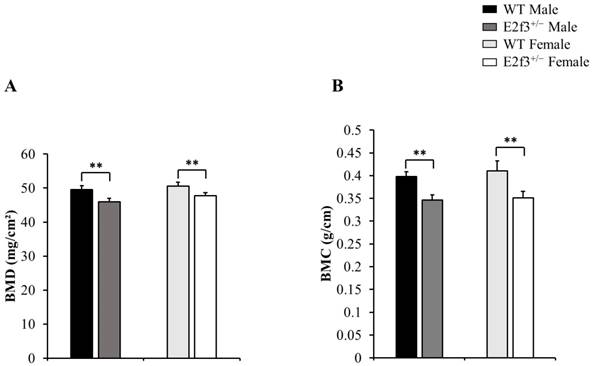 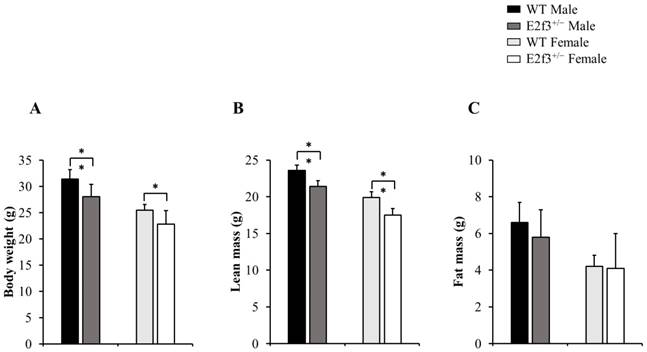 We also performed hematological test and FACS analysis to assess hematological and immunological problems, but there were no abnormal findings in these analyses when compared with those in the wild type mice (Table 2 and data not shown).

In this study, we explored the function of the E2F3 gene in normal development of mice. E2F3 that regulates cell cycle progression is required for development of most tissues and organs in the body. Because of their importance in development and other important processes, here we conducted several in vivo analyses to identify abnormalities in E2f3+/- mice, which pave the way for further research.

Herein, we showed that E2F3 is the pre-requisite factor for normal development in mice. In a previous study that investigated viability of the E2F3 mutant mouse, all E2f3-/- 129/Sv embryos were dead. However, E2f3-/- mice with C57BL/6 × 129/Sv mixed background survived partially, suggesting that E2f3 is an essential gene for embryonic viability in a strain-specific manner [19]. Our data also indicate that presence of E2F3 in C57BL/6N background is essential for embryo survival and that the amount of E2F3 is also important for the normal development of bones and muscles in mice. It might be possible that incidence of viability of E2F3 embryo depends on the genetic background of mice.

A previous study demonstrated that E2F3, plays a pivotal role in normal cardiac development. A small fraction of E2f3-/- neonates showed normal heart. However, these animals ultimately died from defects in the cardiac muscle, and as a result of congestive cardiac failure [32]. Our observation that E2f3+/- mice had lower heart weight compared with that of littermate wild mice, may be associated with the partial deficit of E2F3 that may affect poor heart muscle development in E2f3+/- mice. 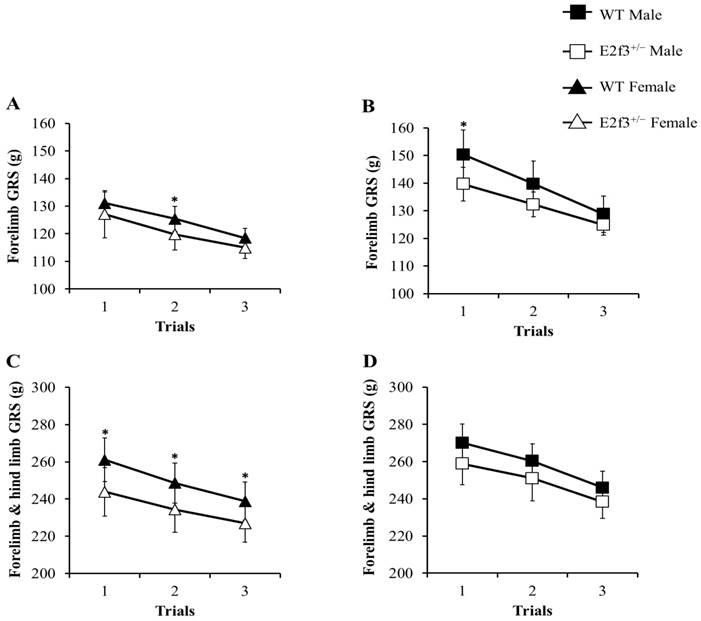 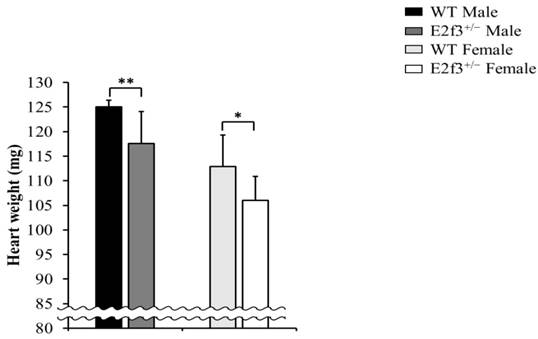 On the contrary heterozygous mutant, E2f3+/- mice had shown remarkable significant phenotypes. E2f3 is not an allelic exclusive gene, and is expressed more in E2f3+/+ cells than E2f3+/- cells [33]. Growth retardation with skeletal imperfection of E2f3+/- mice, suggest that E2f3 expression level is crucial for postnatal musculoskeletal development. E2F3b has been characterized as an essential player, in myogenic differentiation and development [13]. Reduced lean mass, grip strength, and heart weight of E2f3+/- mice, may be associated with specific function of E2f3b in myogenesis. Unlike muscle development, the specific role of E2f3 in osteogenesis is unknown. Small bone area and low BMD and BMC of E2f3+/- mice strongly suggest E2f3 has a unique function in bone development. Earlier studies have shown that activator E2F transcription factors share a binding motif, and that loss of E2F3 activity triggers compensation effects of other activator of E2Fs [34-37]. Our results imply that compensation effects are insufficient to make up for a unique function of E2F3 in muscle and bone development, and leads to growth retardation.

Previous studies have demonstrated the importance of the E2F family in hematopoiesis [5, 38, 39]. Individual knock-out of E2f1, E2f2, and E2f4 causes' hematopoietic impairment, and also, E2f1-3 triple knock-out leads to tremendous decline of bone marrow cellularity and CD11b+ myeloid cell count [5, 38-41]. However, individual Mx-Cre; E2f3fl/fl mice exhibited normal bone marrow cellularity [5]. In this study, E2f3+/- mice showed normal blood cell count/hematocrit level including CD11b+ cells, and is in contrast to musculoskeletal imperfection. It seems that E2f3 has functional redundancy with other E2Fs in hematopoietic development, and consequently E2f3 deletion does not cause hematopoietic defects.

Also, because E2F3 contributes to neural development, more explanation is needed as to if E2F3 mutation affects neural functions or not [18, 42].

In this study, we found that complete ablation of E2f3 was fully penetrant in the pure C57BL/6N background, and that E2f3+/- mouse embryo developed normally without fatal disorders. However, they exhibited reduced body weight, growth retardation, skeletal imperfection, and poor muscle condition, but no detectable hematopoietic defects. Findings suggest that E2F3 has a pivotal role in muscle and bone development. However, it remains to be elucidated how E2F3 works, in different tissues or environments.

This research was supported by a grant from KRIBB Research Initiative Program and Korea Mouse Phenotyping Project (NRF-2017M3A9D5A01072797) of the Korean Ministry of Science and ICT through the National Research Foundation.