This study sought to evaluate associations between nephrolithiasis and hemorrhagic and ischemic stroke using a national sample cohort from Korea. Data from 2002 to 2013 were collected for individuals ≥ 20 years of age in the Korean National Health Insurance Service (NHIS)-National Sample Cohort. We extracted nephrolithiasis patients (n = 22,636) and 1:4 matched controls (n = 90,544) and analyzed the occurrence of stroke. Matching was performed based on age, sex, income, region of residence, hypertension, diabetes mellitus, and dyslipidemia history. Crude and adjusted hazard ratios (HRs) were calculated using Cox proportional hazard models, and 95% confidence intervals (CIs) were determined. We performed subgroup analyses according to age, sex, and follow-up period. The adjusted HR of ischemic stroke was 1.13 (95% CI = 1.06-1.21) in the nephrolithiasis group (P < 0.001). The relationship between nephrolithiasis and ischemic stroke remained present for the young women and middle-aged men as well as during a follow-up period of ≤ 1 year. The HR for hemorrhagic stroke did not reach statistical significance. The risk of ischemic stroke was higher in the nephrolithiasis patients.

Nephrolithiasis refers to a stone in a kidney or lower in the urinary tract. The prevalences of this condition have been reported to be 10.6% in men and 7.1% in women in the USA [1] and 5.0% in Korea.[2] The annual incidence was estimated to be 457 per 100,000 in Koreans.[3] At present, the exact pathophysiology of renal stone formation remains unclear. Various risk factors have been proposed, such as chronic kidney disease; poor hydration; abnormal calcium metabolism, including hyperparathyroidism; increasing age; obesity; diabetes mellitus; warm climate; and high animal protein intake.[4-7]

The purpose of this study was to evaluate associations between nephrolithiasis and stroke using a national sample cohort of the Korean population. We extracted nephrolithiasis patients and 1:4 matched controls and analyzed the occurrence of stroke. In this study, we divided stroke into hemorrhagic and ischemic stroke. In addition, we performed analyses based on follow-up periods.

This national cohort study relies on data from the Korean Health Insurance Review and Assessment Service-National Sample Cohort (HIRA-NSC). The detailed description of this data was described in our previous studies [19,20].

Histories of admission for hemorrhagic stroke (I60: subarachnoid hemorrhage, I61: intracerebral hemorrhage, and I62: other non-traumatic intracranial hemorrhage) and ischemic stroke (I63: cerebral infarction) were identified using ICD-10 codes. We selected participants who were treated for stroke ≥ 1 time. These methods were used in other studies that evaluated the incidence of stroke in Korea.[21,22]

Chi-square tests were used to compare the rates of the general characteristics between the nephrolithiasis and control groups.

For the subgroup analyses, we divided the participants by age (20-39, 40-59, and 60+ years) and sex (men and women). In another subgroup analysis, we assessed the HRs of nephrolithiasis for hemorrhagic stroke and ischemic stroke within specific follow-up periods (≤ 1 year, 2-3 years, and > 3 years).

A schematic illustration of the participant selection process used in the present study. Out of a total of 1,125,691 participants, 22,636 nephrolithiasis patients were matched with 90,544 control participants based on age, group, sex, income group, region of residence, and prior medical history. 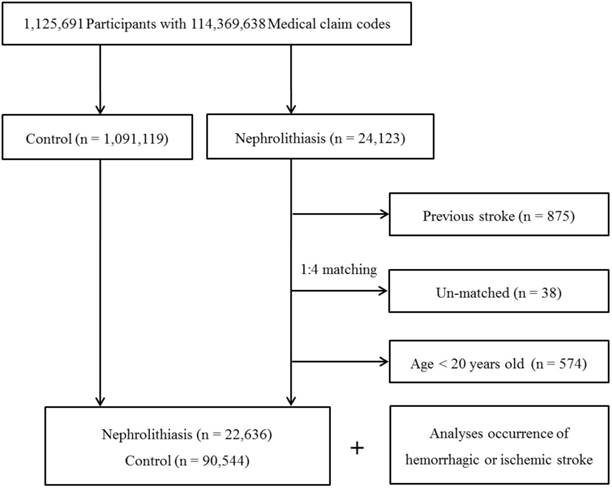 In the subgroup analyses, we found a relatively high HR in young women (adjusted HR = 1.89, 95% CI = 1.04-3.47) despite the smaller number of subjects in this group (n = 10,360) than that in other groups. Previously, an evident association between nephrolithiasis and stroke was identified in women.[11,18] Although the association between nephrolithiasis and stroke in women has proven to be challenging to explain, the high prevalence of urinary tract infections in women could be a possible answer.[23]

This relationship could be derived from the effects of hypercalciuria, hyperoxaluria, and hypocitraturia.[10] The common pathophysiology between vascular and renal calcification was suggested, because the vascular plaque had comparable constituent with renal Randall plaque, which is a stone nidus. [24] In addition, the shared pathophysiology of deficiencies in inhibitors of calcification in blood and urine of stroke and nephrolithiasis or chronic renal disease patients might contribute to this association.[26,27]

The association between nephrolithiasis and stroke could be explained based on common pathophysiologies. First, obesity and insulin resistance result in defective ammoniagenesis;[28] therefore, diabetes could increase the risk of uric acid renal stones by inducing low urinary pH.[29]

The advantages of this study are consistent with those of our previous studies utilizing the HIRA-NSC.[32-34] We used a very large, representative, nationwide population. Because NHIS data include all citizens of Korea, without exceptions, there were no participants lost during follow-up. The control group was randomly selected, with matching based on age, sex, income, region of residence, and prior medical history used to avoid confounding effects. An adjusted hazard model was used to further minimize the impact of confounders. We extended previous findings in that we divided stroke into hemorrhagic and ischemic stroke and analyzed risks of stroke by follow-up period.

This study has certain limitations. Despite the cohort study design, we could not exclude the effects of possible confounders that might have affected both nephrolithiasis and stroke. Because we do not have data regarding body mass index, smoking, and history of alcohol use, we could not adjust for these factors. Certain patients might not have visited a clinic for treatment of nephrolithiasis and/or stroke, and these patients might have been missed. Visits for nephrolithiasis might have increased the chance of stroke detection. Therefore, we performed an additional analysis for between > 3 months and 1 year after the detection of nephrolithiasis. The results of this analysis were consistent with our aforementioned findings (adjusted HR of ischemic stroke = 1.22, 95% CI = 1.01-1.48, P = 0.044, Supplementary Table S1).

The nephrolithiasis patients had an elevated risk of ischemic stroke. In the subgroup analysis, this association was constant in young women and middle-aged men as well as during a follow-up period of ≤ 1 year. There was no significant association between nephrolithiasis and the risk of hemorrhagic stroke.

The authors do not have any financial or personal relationships with people or organizations that could inappropriately influence their work in the present article.

9. Obligado SH, Goldfarb DS. The association of nephrolithiasis with hypertension and obesity: a review. Am J Hypertens. 2008;21:257-64