Background: The application of adipose tissue-derived stromal cells (ASCs) in regenerative medicine has become a growing trend due to its abundance and differentiation potentials. However, several breast cancer studies indicated that ASCs promote tumor progression, therefore, the use of ASCs for reconstruction after oncological surgery poses potential risks. In this study, we aimed to examine whether cancerous or non-cancerous breast cells will exhibit different responses to ASC-derived CM.

Results: ASC-derived CM significantly reduced cell viability by triggering apoptosis in MCF-7, MDA-MB231, and MDA-MB468 cell lines. ATM-Chk2-dependent DNA damage response was activated early in cancer cells when exposed to ASC-derived CM. By contrast, prompted cell proliferation instead of cell death was detected in M10/H184B5F5 cells under the treatment of lower CM concentration. Even when exposed to the highest concentration of CM, only cell cycle arrest accompanied by a weak DNA damage response were detected in M10/H184B5F5 cells, no cell deaths were observed.

In recent medical practices, the use of bone marrow-derived mesenchymal stem cells (MSCs), particularly adipose tissue-derived stromal cells (ASCs), has attracted growing attentions because of its availability and differentiation potential of ASCs. ASCs has the ability to differentiate into various lineages, including adipogenic, chondrogenic, osteogenic, and hepatocytic cell types as MSCs [1]. Paracrine secretion of cytokines and chemokines as well as growth factors from ASCs have also been reported to exhibit anti-apoptotic, anti-inflammatory, immunomodulatory, and anti-scarring effects [2-3]. These specific characteristics make ASCs a promising candidate in a broad array of medical applications. However, the effects of MSCs and ASCs on various types of cancer remain controversial [4]. Several experimental studies support the propensity of MSCs and ASCs to promote growth, progression, and metastasis in various cancer types, including breast cancer, osteosarcoma, and brain tumor [2, 5-6]. Few literature support progressions in other types of cancer [7-9].

In breast surgery, compared with breast prostheses, reconstruction with autologous tissue, such as latissimus dorsi or rectus abdominis, and fat grafting are commonly used, with a benefit of a more natural appearance following oncological mastectomy. However, fat necrosis or apoptosis can lead to transplanted graft resorption and loss of volume, which can ultimately produce an unsatisfactory long-term result [10,11]. Supplementation with ASCs isolated from adipose tissue has been proposed to improve the engraftment and overcome this challenge [10,12].

Given its great potential, a thorough understanding on the influence of ASCs on tumor progression, particularly in breast cancer, may help in exploring the safety of using ASCs in future regenerative medicine and cell therapy. In this study, we showed that non-tumor cells and cancerous breast epithelial cells exhibited different responses to ASC-derived conditioned medium (CM). ASC-derived CM yielded typical DNA damage responses and eventually apoptosis in malignant tumor cells, whereas non-cancerous M10/H184B5F5 cells showed enhanced proliferation in response to lower concentration of ASC-derived CM. Even under the highest concentration of ASC-derived CM, no deaths were detected in M10/H184B5F5 cells.

Treated samples were prepared as previously described [14], and the cell cycle distribution was analyzed using an LSR II flow cytometer with FlowJo software.

Cells were grown on cover slips inside 6-well plates. After treatment, cell-grown slips were fixed with 3% buffered paraformaldehyde for immunostaining which were prepared as described previously [14]. Fluorescence images were detected and captured using a Zeiss AxioPlan 2 system (Carl Zeiss, Oberkochen, Germany).

Cell viability after treatment was determined using an MTT assay. Treated cells were washed with PBS and incubated with MTT (10 μg/mL) in freshly refed medium under 37°C, 5% CO2 for 2 hours. Formazan crystal produced by living cells were dissolved in dimethyl sulfoxide and quantified by measuring absorbance at a wavelength of OD570. 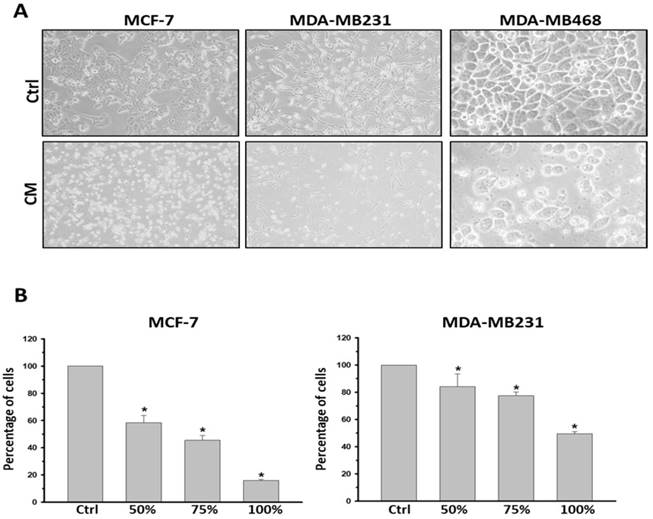 To determine the influence caused by culture medium alteration, we firstly examined the apoptotic state of both the most malignant MDA-MB231 and the non-cancerous M10/H184B5F5 cells under either DMEM or fresh K-Medium (FM) which is the basal medium of ASC-derived CM. 5×105 MDA-MB231 or M10/H184B5F5 cells were cultured with DMEM or FM for 72 hours followed by flow cytometry analysis. Both floating and attached cells were collected for propidium iodide (PI) staining, commonly used for detecting DNA content in cell cycle analysis. In this study we used PI staining with flow cytometry to examine the population of cell death (sub-G1 population) because small DNA fragments could be observed during the late stage of apoptosis. As shown in the presented results, these two different basal medium triggered no significant difference of sub-G1 populations even in malignant MDA-MB231 (supplementary Figure S2). Furthermore, MCF-7, MDA-MB231, and MDA-MB468 cell lines were treated with CM derived from the incubation of 1×106 ASCs for 24 h. The CM was filtered with 0.2 μm filter to avoid contamination before using for cell culture. All three breast cancer cell lines exhibited a significant reduction in viability when cultured with CM. The morphology of the attached cells became rounder, and an increased number of floating cells was observed, indicating cell death (Figure 1A). The morphological observations were confirmed using an MTT analysis. To avoid any false-positive effect caused due to deficient nutrition in CM, we tested the influence of ASC-derived CM following a dose-dependent manner. ASC-derived CM was mixed with fresh DMEM in proportion for the experiments. As expected, all concentrations (50-100%) of ASC-derived CM reduced cell viability after 72 h exposure in both MCF-7 and MDA-MB231 cancer cells (Figure 1B). The similar results were also obtained in MDA-MB468 (supplementary Figure S3A).

To further examine the responses of these cells to ASC-derived CM, cells were harvested after treatment and DNA content was analyzed using flow cytometry. In brief, 5 × 105 cells were seeded into 6-well culture dishes overnight to allow attachment, and treated with ASC-derived CM by following a time-course protocol. As shown in Figure 2, the quantification of cell cycle analysis indicated that the sub-G1 population drastically increased and reached a peak after 72 h of treatment with ASC-derived CM in MCF-7, MDA-MB231 (Figure 2A), and MDA-MB468 (Supplementary Figure S3B) breast cancer cell lines. Consistent with the results obtained from flow cytometry, the expression of cleaved-caspase 3, which is activated during cell apoptosis was also demonstrated (Figure 2B, 2C).

We next examined whether cell death triggered by ASC-derived CM was accompanied by unfavorable DNA damage. We performed immunofluorescence assays for pSer139 histone H2AX (γ-H2AX). γ-H2AX is recruited when DNA damage occurs, particularly when double-strand breaks occur. It is widely accepted as a marker for DNA damage. MCF-7 and MDA-MB231 cells cultured with ASC-derived CM for 72 hours exhibited the expression of pan-nuclear γ-H2AX staining relative to cells treated for 72 hours with control culture medium (Figure 3A). This DNA damage response was further confirmed using a protein immunoblot. In both cells, the protein immunoblot of γ-H2AX was more intense than that of the control group in response to such treatment (Figure 3B, 3C).

Fully- activated ATM-Chk2 signaling cascades in malignant MCF-7 and MDA-MB231, but not in non-cancerous M10/H184B5F5 cells when exposed to ASC-derived CM

To determine whether this checkpoint system might be related to the induction of DNA damage and cell death by ASC-derived CM, MCF-7, MDA-MB231, and M10/H184B5F5 were cultured with ASC-derived CM in a time-course manner and then harvested for Western blot analysis. The results revealed that MCF-7 and MDA-MB231 cells exhibited typical DNA damage checkpoint activation. Both pSer1981 ATM and pThr68 Chk2 were phosphorylated within 24 hours following CM exposure. By contrast, this pattern was greatly delayed in M10/H184B5F5 cells, and pThr68 Chk2 activation was only weakly detected after a 72-hours treatment with a slight increase in pSer1981 ATM phosphorylation (Figure 5). Taken together, these data revealed the distinct responses between malignant tumor and non-cancerous cells when exposed to ASC-derived CM.

In the practice of plastic surgery, ASCs combined with fat graft have been frequently used in oncological breast reconstruction [17]. However, many in vitro and in vivo studies have pointed out the potential risk of ASCs in promoting breast cancer progression [2,18]. In this regard, questions arise whether the ASCs used in the breast reconstruction may potentially interact with the remaining cancer cells and promote its growth. In our study, ASC-derived CM exhibited inhibitory effects on breast cancer cell lines with increased DNA damage and cell apoptosis. 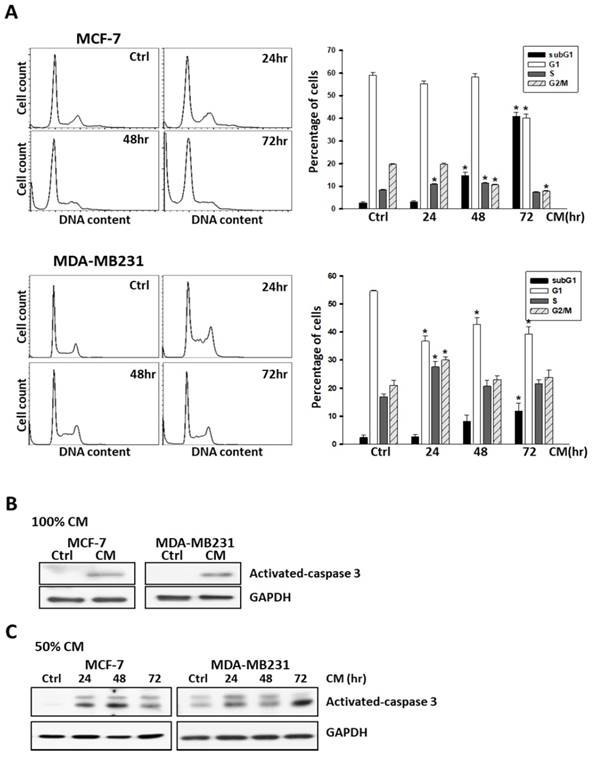 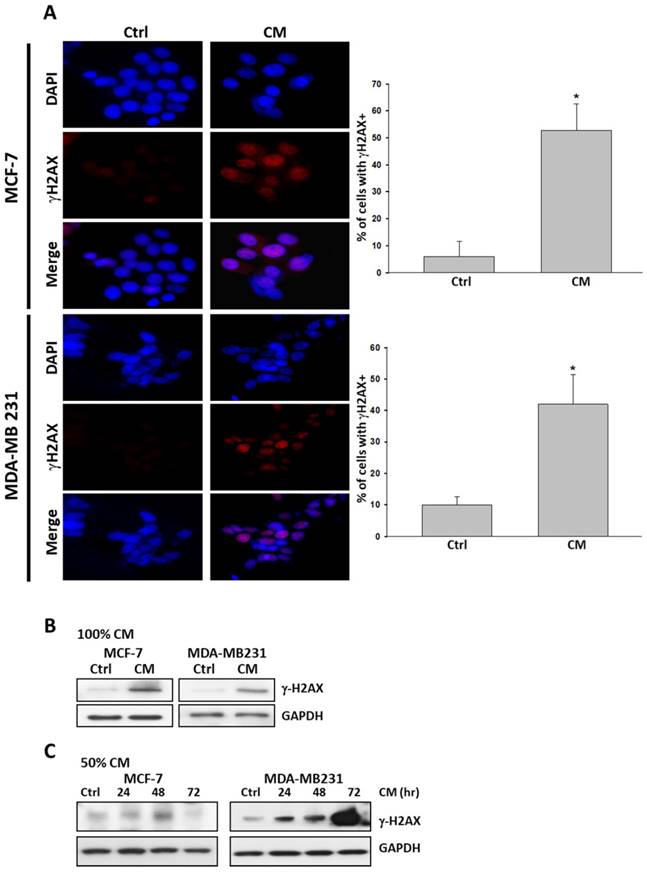 The toxic metabolic waste products or the lack of nutrition in the CM is not the reason for the inhibitory effect observed in this study, since 50% or 75% ASC-derived CM also suppressed cell viability on breast cancer cell lines. While different research groups demonstrated various responses in different cancer cell types when interacting with ASC-derived CM, the discrepancy between these studies may have resulted from dissimilar ASC origins or different culture conditions [2]. In addition to ASCs, mesenchymal stromal cells in other studies also support the inhibitory effects on breast cancer cell lines with either direct co-culture or CM exposure [19,20], even in highly malignant cell line such as MDA-MB231 [21]. Most importantly, no evidence of increased cancer recurrence rate was noted in breast reconstruction with fat grafts which contain ASCs during long-term follow-ups [22-24]. In this study, we provided evidences of the inhibitory effects of ASC-derived CM on breast cancer cell lines. 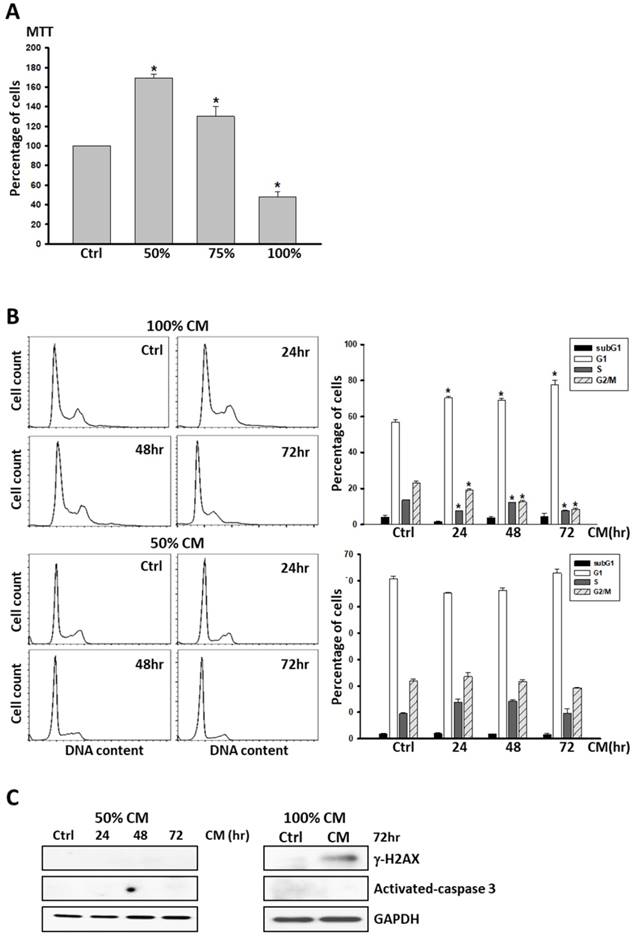 ASC-derived conditioned medium (CM) induced fully activated ATM-Chk2 cascades in MCF-7 and MDA-MB231, but not in M10/H184B5F5 cells. MCF-7, MDA-MB231, and M10/H184B5F5 cells were cultured with ASC-derived CM for up to 72 hours before the harvest and preparation of cell-free extracts. Phosphorylated pSer1981 ATM and pThr68 Chk2 and the total protein level of Chk2 were analyzed using Western blot. GAPDH levels are presented as loading controls.

Notably, our data also revealed that the ATM-Chk2 cascades were activated early by 24 hours in both MCF-7 and MDA-MB231 breast cancer cell lines when exposed to ASC-derived CM. This DNA damage response and the inhibitory effects of ASC-derived CM on tumor cell growth, cell cycle progression, and apoptosis may be resulted from the paracrine effect of ASCs. Some studies showed that the inhibition of cancer cell line maybe related to the increased level of transforming growth factor-beta (TGF-β) [5,25] which is produced and released by ASCs [26]. Furthermore, our results suggested that there may be other undefined mechanisms that protect non-cancerous M10/H184B5F5 cells against stress caused by ASC-derived CM, because these cells did not exhibit fully activated DNA damage signaling and the treatment produced only minimal cell death. In summary, our study evidently showed that ASC-derived CM leads to DNA damage, signaling activation of DNA damage, and eventually cell apoptosis in breast cancer cell lines. By contrast, no cell apoptosis was observed in the non-cancerous breast cell lines when exposed to identical conditions. This study provides additional information on the ongoing debate on the potential risk of using ASCs in breast reconstruction following oncological surgery, however, additional data and further detailed analysis such as the effect of cell-cell contact in ASCs and breast cancer cells are warranted.