The increased use of novel and powerful immunosuppressive drugs in kidney diseases may concomitantly expose the patients to higher risk of opportunistic infections, some of which still remain underdiagnosed thus mishandled. As such, we recently had a less prepared encounter of pulmonary nocardial infection in an ANCA-associated renal vasculitis patient under steroid therapy. Despite the use of broad-spectrum antimicrobials including micafungin, the infection was still unbridled and eventually culminated in lethal brain abscess.

We thus chose to renew the knowledge of the clinical features, imaging manifestations, differential diagnosis, specific laboratory tests and unique treatment about this rare infection in kidney diseases patients under immunosuppressive therapy. In addition, CT images of easily confused pulmonary lesions superimposed on kidney diseases were also retrieved from our depository. Moreover, impaired renal function as a risk factor for infection and pharmacological options for the treatment were also focused.

By sharing our hard-learnt experience and reviewing the literatures, our report may contribute to the awareness among the clinicians in general and nephrologists in particular of this rare disease in susceptible patients and facilitate a swift thus life-saving treatment.

Nephrologists are now facing an increased use of novel immunosuppressive agents against a broad-spectrum of kidney diseases or situations including but not limited to renal vasculitis, nephrotic syndrome, lupus nephritis and monoclonal gammopathy of renal significance [1,2,3]. Besides the well-defined actions of the calcineurin inhibitors [4], they may act on the CD28/CTLA-4-B7 pathway (Belatacept) [5], which are basically the award-winning materials of the latest Nobel Prize. Alternatively, the therapeutic mechanisms of these agents may respectively target the differentiation antigen CD52 (Alemtuzumab), CD25 (Basiliximab) and CD20 (Rituximab) located on the surface of T- or B-lymphocytes [4]. In concerted action, simultaneous use of corticosteroids may lead to a reduction of neutrophil chemotaxis, T cell activation and proliferation, and macrophage function. Not unexpectedly, these powerful immunosuppressants may also expose the patients to increased risk of serious infections [5,6] including the opportunistic one caused by Nocardia spp [7].

The genus Nocardia is a member of the mycobacteriaceae family, which is ubiquitous in nature but normally not present in human [8]. The namesake nocardiosis is a rare infection usually seen in susceptible patients with underlying chronic diseases or immunosuppression of endogenous or iatrogenic origin [9]. In sporadic cases, pulmonary nocardial infection or cerebral abscess was encountered in patient treated for nephrotic syndrome, systemic lupus erythematosus, anti-neutrophil cytoplastic antibody (ANCA)-associated renal vasculitis or renal transplant (Table 1, with references 10-19). Clinical recognition of this disease remains difficult due to its low incidence and lack of pathognomic symptoms. Reportedly, the median time interval between onset of symptoms and diagnosis was 30 days [20]. In most cases, late diagnosis is related to mortality in addition to the severity of the underlying disease and an advanced or disseminated form of nocardial infection [21,22]. Consistent with our experience, delayed diagnosis may also be responsible for some likely remedial lethality [23].

This article therefore presented a typical case and reviewed the clinical features, imaging manifestations, differential diagnosis, specific laboratory tests and unique treatment of this rare infection, especially with substantial attention to the complete evolution of pulmonary nocardial infection with ensuing lethal brain abscess from our hard-learnt experience. The study had acquired proper institutional approval and necessary consent from the participants.

The index case was a 53-year old woman with acute renal failure, who had elevated serum creatinine of 380.7μmol/L (reference 44.2-132.6μmol/L), positive ANCA against myeoperoxidase and biopsy-confirmed type III crescentic glomerulonephritis. Besides four sessions of plasmapheresis, she was treated for ANCA-associated renal vasculitis with daily intravenous mythelprednisolone of 320mg for three consecutive days and 40mg thereafter. Free of pulmonary infection (PI) (Figure 1), the patient was discharged one month later with a daily oral dose of 40mg mythelprednisolone.

Nocardial infection in patients with kidney disease having immunosuppressive therapy. 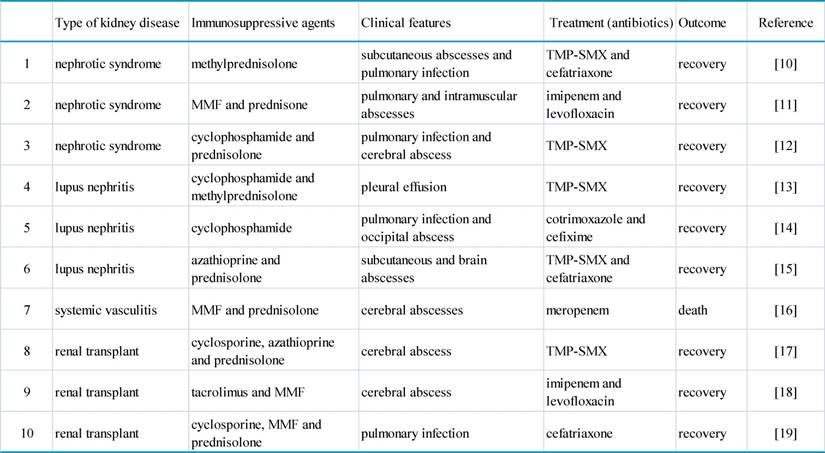 Clinical course of our case. It schematically recorded the selection of antibiotics according to the dynamic changes of CT images and the accompanying complications. In particular, multiple polysized pulmonary nodules with cavitation at different levels were highlighted (both parenchymal and mediastinal windows). The numbers on the X axis denote the day from the admission (Day 1) to the loss of patient (Day 20). 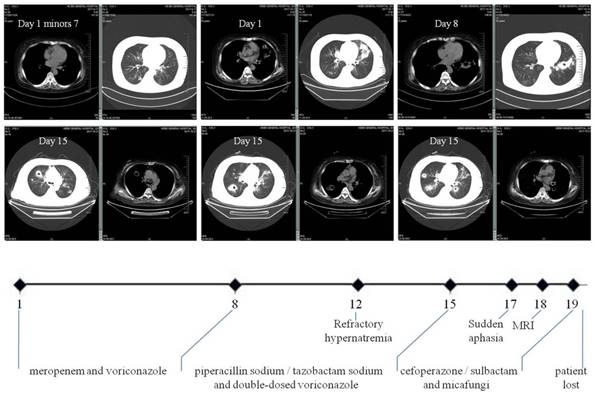 Readmission occurred seven days post hoc due to fever (38.6°C) and hemoptysis. CT scan on admission (Day 1) found PI with cavitation. Laboratory tests showed WBC count 20.3×109/L with 96.9% neutrophils, T-lymphocyte count 102/uL (690-1760/uL), hemoglobin 110g/L (130-150g/L), platelet 170×109/L (100-300×109/L), C-reaction protein 185.2mg/L (<10mg/L), calcitonin 1.6ng/mL (<0.05ng/mL), (1,3)-β glucan D detection test (G-test) 67.8pg/mL (<10pg/mL), serum creatinine 300.0umol/L, normal coagulation function including D-dimer and negative ANCA. Aerobic sputum but not blood cultures produced aeruginosa. She was immediately given intravenous broad-spectrum antibiotics with dose and form respectively determined by creatinine clearance and CT findings (Figure 1): meropenem and voriconazole (Day 1 to 8), piperacillin sodium/tazobactam sodium and voriconazole with double-dose (Day 9 to 14), cefoperazone/sulbactam and micafungi (Day 15 to 19). The use of steroid was continued but reduced to half-dose two days after admission. Meanwhile, recurrent hypernatremia emerged (150-170mmol/L) which was only remedial to blood purification. There was sudden aphasia and right hemiparesis, prompting the collection of blood and sputum from deep trachea for specific microbial tests by our pharmacological center, which is a reliable and sophisticated research institution [24,25]. In short notice thereafter, brain abscess was detected by MRI (Figure 2). The patient's condition further worsened and her vitals were no longer sustainable (Day 20). After that, growth of Nocardia asteroids from the said sputum was found on the Loewenstein-Jensen media and subsequently confirmed by the 16S rDNA sequence analysis [26].

The body site most frequently involved was the lung accounting for 70% of the infection, followed by the skin and the brain [27]. Pulmonary involvement may manifest fever, cough and hemoptysis, with pleomorphic radiographical findings of infiltration (62.6%), multiple nodules (31.3%) and cavitations (18.8%) [20] (Figure 1). Accordingly, the main differential diagnosis includes invasive fungal disease, Wegener's granulomatosis, malignancy, alveolar hemorrhage in ANCA-associated vasculitis and tuberculosis. As priori, invasive pulmonary aspergillosis may demonstrate the characteristic halo sign on CT scan (Figure 3A and B) and a definite diagnosis is supposedly possible in the later course of infection (clinical symptoms and signs >10 days) with elevation of the G-test [28]. By comparison, pulmonary nodules in Wegener's granulomatosis were usually well demarcated and distributed mainly in the peripheral zone on CT scan (Figure 3C and D) [29]. Of note, increased disease activity is almost inevitably accompanied by elevated ANCA titer (predominantly anti-proteinase 3) and aggravated target organ damage. In clinical practice, however, these diagnostic clues may be perplexedly blurred in such a way that the above lesions sometimes bear close resemblance (Figure 3E and F). Nonetheless, we believed that the solution to this dilemma depends on the simultaneous recognition of risk factors, monitoring for clinical symptoms and attention to accessory test results [30]. At last, CT images of alveolar hemorrhage in ANCA-associated vasculitis and lung cancer with multiple intrapulmonary metastases were also available (Figure 3G and H). 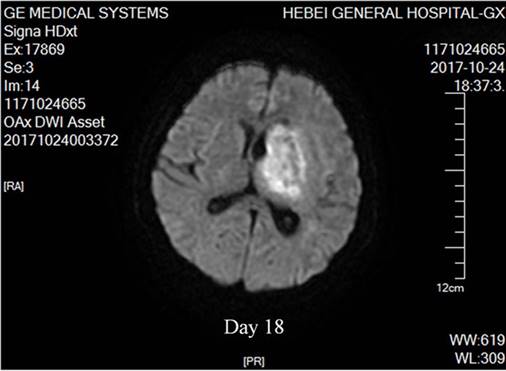 Pulmonary invasive fungi infection, Wegener's granulomatosis and the like. A and B: Pulmonary aspergillosis in a patient of lupus nephritis receiving cyclophosphamide and steroid. He had a G-test of 362 pg/mL (reference, <10pg/mL) with etiological evidence. C and D: Multiple nodules (arrows) in biopsy-proven Wegener's granulomatosis. The patient also had positive ANCA against the proteinase 3. E and F: complicated pulmonary invasive fungi infection and Wegener's granulomatosis, respectively. Clinically confirmed pulmonary aspergillosis in a 57-year female treated for monoclonal gammopathy of renal significance (E) and biopsy-proven Wegener's granulomatosis in a 35-year male (F). G and H: pulmonary vasculitis and lung cancer, respectively. Pulmonary lesion with alveolar hemorrhage caused by anti-proteinase 3 positive ANCA-associated vasculitis in a patient with acute renal failure (G) and right central type lung cancer with multiple intrapulmonary metastases in another patient admitted for proteinuria (H). 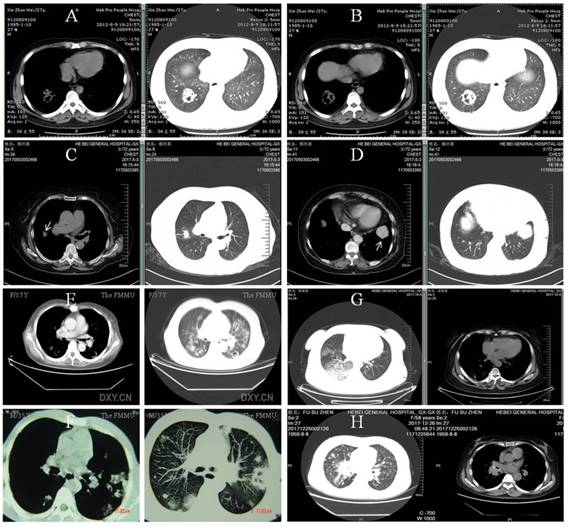 Gram-positive beaded branching filaments of N. asteroids in a smear of sputum. Magnification ×1,000. [27] 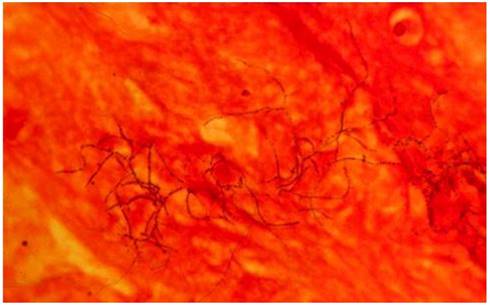 Cerebral nocardiosis is uncommon, representing only 2% of all brain abscesses. Nevertheless, the Nocardia spp is known to have a tropism for cerebral tissue [21] and neurological symptoms may include headache, nausea, aphasia and hemiparesis. There are three principal neuroimages on MRI (Figure 2): areas reflecting purulent necrosis; ring lesions consistent with abscess formation following necrosis; and edema originating from vascular exudation and infiltration. Confusingly, cerebral aspergillosis may also mimick similar findings. Facing these ambiguities, Gabelmann et al. did advocate the diagnostic relevance of the G-test and clinical response to specific antifungal treatment [32]. Whenever possible, neurosurgical intervention was recommended [33].

Impaired renal function may compromise normal immune function and disturb intestinal barrier [34]. A recent study found that declined renal function did predispose to infections [35] and our latest work confirmed that elevated serum creatinine was an independent risk factor for severe pulmonary infection in nephrotic syndrome patients receiving the cyclosporin regimen [30]. Conversely, the kidneys are known 'victims' of aberrant immune function, which may confer kidney-specific damage-associated molecular patterns that cause sterile inflammation, the development of kidney-targeting autoantibodies and molecular mimicry with microbial pathogens [2]. Conceivably, the risk of nocardial infection may be higher in kidney diseases patients receiving immunosuppression as they are usually accompanied by various degree of renal insufficiency. In this regard, physicians when facing unexplainable hypernatremia should also consider neurogenic origin derived from intracranial infection [36], especially in patients with impaired cell mediated immunity following concurrent pulmonary infection [37].

A definite diagnosis is possible with the identification of Nocardia spp in a clinical specimen of a symptomatic patient [20]. The observation of numerous thin branching, filamentous and beaded microorganisms which were Gram-positive and acid-fast is an important indicative of Nocardia spp (Figure 4 and Figure 5) [27]. The incubation time, however, must be unconventionally longer and superimposed infection by Gram-negative bacteria is common [38] (approximately 90 hours and aeruginosa in our case, respectively). Therefore, microbiology laboratory should be informed when nocardiosis is clinically suspected in order to adequately employ the proper growth medium (Loewenstein-Jensen) [39] and decontamination techniques (paraffin baiting) [40]. In contrast, the 16S rDNA sequence analysis may greatly speed up this cumbersome process [26]. In order of frequency, the most common pathogenic Nocardia species are N. asteroids, N. brasiliensis and N. Otitidiscaviarum. Others species of Nocardia such as N. farcinica have rarely been isolated from clinical specimens [26].

Nocardia asteroids usually show resistance pattern to most antibiotics except trimethoprim/sulfamethoxazole (TMP/SMX), imipenem and amikacin [41]. A sulfonamide containing regimen, particularly the TMP/SMX, was considered as the treatment of first choice [42,43]. Currently, imipenem used alone or in combination with amikacin was also proposed as a popular therapeutic choice, especially in severely immunocompromised patients, and in cases of central nervous system, disseminated, or advanced infections [21,22]. The optimal duration of treatment, however, is unknown and a prolonged course of medication is mostly recommended because of the relapsing nature of the infection. Of importance, patients with nocardiosis of the central nervous system may benefit from a combined medical-surgical treatment, with a satisfactory clinical outcome [33]. Selection of appropriate antibiotics given at the optimal time is hence crucial for an effective therapy [16]. Nevertheless, empirical treatment should be initiated expediently prior to the results of drug sensitivity test as in most opportunistic infections [44]. 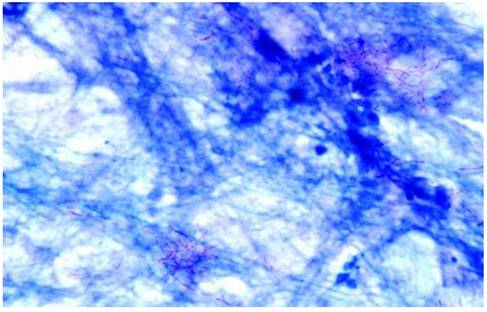 First, rare opportunistic infections are not entirely rare in immunosuppressed patients [45]. Then, hematogenous dissemination of the infection to central nervous system in such patients is not uncommon and diagnostic delay often leads to a fatal outcome [46]. Moreover, spurious laboratory results (such as unexplained hypernatremia) require extra vigilance as they may be the only precursory indicative of an insidious yet progressive disorder [47]. Finally, an effective therapeutic decision clearly depends on multidisciplinary collaboration with the participation of specialists in microbiology and pharmacology [30].

Our report may share a productive communication between clinicians in general and nephrologists in particular who are caring susceptible patients. Hopefully, these hard-learnt experiences may raise the awareness of this rare yet sometimes lethal infection and enable a successful management.

This study was supported by grants from the Key Research and Development Plan of HeBei Province (18277709D) and HeBei provincial Key Project of Medical Science (20180186).

31. Beaman BL, Ogata SA. Ultrastructural analysis of attachment to and penetration of capillaries in the murine pons, midbrain, thalamus, and hypothalamus by Nocardia asteroides. Infect Immun. 1993;61:955-965