Objective: To investigate the safety and efficacy of the combination therapy of anterior stromal puncture (ASP) with bandage contact lens for bullous keratopathy (BK).

Methods: Twelve cases (12 eyes) with vision acuity no better than light perception were treated with ASP surgery and bandage contact lens. 200 points punctures were made through the corneal epithelium and Bowman's layer vertically, using fine needles. A soft bandage contact lens was applied immediately and removed 2 weeks later. The severity of irrigating symptoms including pain, photophobia and tearing was graded and calculated before treatment and 1, 2, 4, 12 weeks after the surgery, slit-lamp microscope examination was used to quantify the time for corneal epithelial blisters disappearing, optical coherence tomography (OCT) was used to monitor the central corneal thickness.

Results: No cornea infection was observed during the following up period. The average grade scores of the irrigating symptoms was 8.3 ± 2.1 before surgery, while it was reduced to 4.8 ±1.9 two weeks after the surgery (p=0.0003). Slit-lamp microscope examination showed that corneal edema relieved obviously after the operation, the average time for epithelial blisters disappearing was 15.6 ± 4.0 days. The average central corneal thickness of the eyes was 999.3 ±278.0 μm before the treatment, while it was 805.1 ± 145.0 μm four weeks after the treatment, with a statistically significant difference (p=0.043).

Conclusions: ASP with bandage contact lens is an effective and safe treatment for patients with BK and low vision that not suitable for corneal transplantation.

Bullous keratopathy (BK) is the cornea pathology when corneal endothelial dysfunction occurs due to various causes, in which fluid of corneal stroma and epithelium can't be pumped out properly, thereby forming a long-term edema, resulting in formation of blisters in epithelium and sub-epithelium of the cornea [1]. It is a late manifestation of corneal endothelial decompensation. In clinical, the causes of BK are including advanced age, ocular trauma, diseases such as primary corneal endotheliopathies, absolute glaucoma and endothelial cell loss due to surgical interventions such as penetrating keratoplasty following graft failure, cataract surgeries and vitreoretinal surgeries with silicone oil implantation [2-5]. Continuous and progressive cornea edema leads to visual acuity decreasing. And rupture of the epithelial bullae can cause symptoms of severe ocular pain, lacrimation and photophobia. It increases the risk of microbial infection [6-9].

Corneal graft is the definitive treatment for BK which can restore vision and provide pain relief [10, 11]. For patients with poor visual function and no promising improvement of visual acuity, or those who has limited economic capacity, the primary goal of treatment is to relieve symptoms and restore normal ocular surface. Current treatment includes medications, contact lens wearing, amniotic membrane transplantation, conjunctival flap covering, penetrating keratoplasty and endothelial transplantation; however, each has its own limitations [7-10, 12-14]. In 1965, Salleras described an alternative method termed electrocautery of Bowman's membrane for bullous keratopathy [15]. However, there were also some complications related to this procedure, such as definitive corneal flattening, corneal healing problems, intraocular pressure (IOP) increase and shortening of the anterior chamber [15-17]. In this study, we observed the clinical efficacy and safety of anterior stromal puncture surgery combined with corneal bandage contact lens in bullous keratopathy.

This study was approved by the ethics committee of Tongji hospital, all of the treatment was applied to the twelve eyes of Declaration of Helsinki, informed consent was collected before treatment. 12 patients with bullous keratopathy were treated from March 2013 to July 2017, 7 males and 5 females, aged from 47 to 84 (mean 64.3±9.8) years. Causes of bullous keratopathy: 2 patients received vitrectomy combined with silicone oil implantation for retinal detachment, 6 patients received phacoemulsification with or without intraocular lens (IOL) implantation,3 patients received trabeculectomy for angle-closure glaucoma, while the other one got bullous keratopathy from ocular trauma. All of the 12 patients had irritation symptoms including recurrent eye pain, photophobia and lacrimation. Corneal stroma was thickened and edematous with various density of gray haze, with intact or ruptured corneal epithelial blisters. The vision acuity of the patients was below or equal to light perception and the course of the disease lasted more than one year. Preoperatively, all cases had used a variety of topical medications with no significant relief (Table 1).

ASP surgery was carried out under topical anesthesia. After sterilization and draping, the diseased eyes were prepared for topical anesthesia with 0.04% oxybuprocaine, one drop every five minutes for three times. Loosen central corneal epithelium was removed gently using sterile cotton swab (when difficult to remove, it was not removed) under surgery microscope. Number 30 insulin injection needles were used to make vertical punctures through the corneal epithelium and Bowman's layer, the depth was set according the thickness measured with optical coherence tomography (OCT, Zeiss, German), with a depth no less than half of the full thickness while penetration to be avoided. The total ASP points were no less than 200, to make sure that punctured area could cover the corneal epithelial blisters area, while the areas with normal cornea epithelium left intact. After the surgery has been done, a soft bandage contact lens was applied immediately to reduce irritation and pain. Post operation treatments including antibiotic (0.5% Levofloxacin eye drops, qid), anti-inflammation (0.1% pranoprofen eye drops, qid) and basic fibroblast growth factor gel to prevent infection and promote the healing of cornea epithelium (Fig 1).

The irrigating symptoms including pain, photophobia and lacrimation was graded according to the severity, that is serious, medium, mild and absent, scored 3, 2, 1 and 0 accordingly. The grades were tested before and 1, 2, 4 and 12 weeks after the treatment.

Slit-lamp microscope examination was used to record the time for corneal epithelial blisters disappearing, examination was carried out before and 1, 2, 4 and 12 weeks after the surgery.

The procedure for ASP surgery, under topical anesthesia, No.30 insulin injection needles were used to make vertical punctures through the corneal epithelium and Bowman's layer, the depth was set according the thickness measured with OCT and restricted by needle holder (A and B). The total ASP points were no less than 200 (the surgery was performed into the entire cornea), to make sure that punctured area could cover the corneal epithelial blisters area (C).

The healing of cornea epithelial layer was also evaluated with fluorescein staining following Lemp 5 zones 0-3 scoring system [4]: the center of the cornea (zone 1), superior (zone 2), temporal (zone 3), nasal (zone 4), inferior (zone 5). Fluorescein staining of each zone can be divided into four levels: 0 (negative), 1 (punctate dot-like staining, <5 dots), 2 (punctate dot- like staining,> 5 dots), 3 (linear or sheet-like staining). Total score of 0 to 15 points. The examination was done before and 1, 2, 4 and 12 weeks after the treatment.

No cornea infection was observed during the following up period. The severity of the irrigating symptoms was relieved weekly after treatment. The average grade score of the eyes was 8.33 ± 2.10 before surgery, while it was reduced to 4.83 ±1.90 two weeks after the surgery (P=0.0003) (Table 2).

Healing of corneal epithelium and disappearing of blisters

The corneal fluorescein staining score ranged from 4 to 12 points (8.9 ±2.8) before ASP surgery, the mean score elevated to 11.9 ± 2.5 (P=0.0100) one week after ASP surgery, while decreased to 4.8±1.8 (P=0.0002) at the 2nd week, and remained a low level thereafter, indicating the healing progress of cornea epithelium (Table 3). Correspondingly, the mean time for corneal epithelial blisters disappearing was 15.6 ± 4.0 days, observed under slit lamp microscope.

Score of the irrigating symptoms (

Continuous observation of a typical case for ASP surgery. A 72 years old male patient, whose left eye suffered with irrigating bullous keratopathy for one year after phacoemulsification combined with intraocular lens implantation. The thickness of center cornea was 1260 μm before surgery as indicated by OCT (A), and the cornea was white with obvious edema (B). The central cornea thickness was reduced to 1100 μm two weeks after ASP surgery and bandage contact lens wearing (C), with reduced cornea edema (D). Four weeks later the central cornea thickness reached a stable level of 1050 μm (E), and the cornea become even more transparent comparing to that of the pre-operation (F). 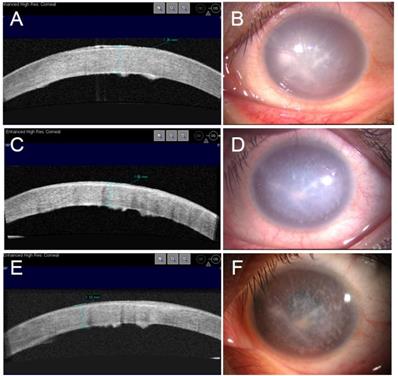 BK is a common complication of corneal injury, glaucoma, inflammation and intraocular surgery, which is due to the destruction of corneal endothelial cells by various factors, especially for those eyes with Fuchs corneal endothelial dystrophy. It has become one of the leading indications of corneal transplantation after the advent of phacoemulsification worldwide, particularly in developed countries [8, 18-21]. BK eyes are characterized by permanent corneal edema and formation of blisters on the corneal epithelium.

ASP was initially used to treat patients with recurrent corneal erosion [22]; this surgical approach can increase adhesion ability of corneal epithelial with basement membrane. Later, ASP was used to treat BK. It is a simple, safe, effective and low-cost procedure to relieve symptoms in patients who are not eligible for corneal transplantation [7, 9, 12, 23, 24]. The most important mechanism for ASP in treating BK is surgery-induced fibrosis. On one hand, ASP makes the epithelial cells to form a direct contact with the substrate stroma, this can form stable adhesion, serve to strengthen hemidesmosome and fixation filaments. On the other hand, fibrotic scarring, as a new layer of barrier formation, hinder the aqueous humor from leaking into the sub-epithelium, subsequently, thus corneal big blisters gradually disappear. Corneal nerves exposure could be eliminated with the fibrosis, thereby reducing the cornea perception and pain [25, 26].

In our study, the severity of the irrigating symptoms was relieved, the corneal epithelium was healed and the edema and corneal thickness was reduced after treatment (Table 2,3,4, Figure 2), suggesting that ASP with bandage contact lens could treat BK patients with troublesome symptoms effectively. Cormier in 1996 described his results about ASP and demonstrated that the corneal thickness increased after the procedure [12]. However, our results showed decreased corneal thickness, probably due to the addition contact lens, which might reduce the damage to the corneal epithelium by mechanical friction of the eyelid and thus protect the basement membrane, enhance epithelial repair and matrix formation of a strong adhesion. We used fine needles to perform corneal stromal puncture surgery for 12 cases of bullous keratopathy, all patients achieved relief of irritation, corneal edema alleviated and epithelial healed, the outcome is satisfactory.

As a conclusion, for bullous keratopathy patients with poor visual function, or those who can't afford for corneal transplantation, ASP surgery with bandage contact lens wearing is an effective, convenient, reusable, economical treatment, can rapidly improve patient eye discomfort, and has an obvious clinical practical value.

We thank Dr. Hong Zhao, Zhitao Wang, Xiao Xiao and Jian Sun for the surgery design and the data preparation in this paper.

The work is supported by National Natural Science Foundation of China, Grant No. 81200661, 81470606 and 81570819, by Hubei Province health and family planning scientific research project, Grant No. WJ2017M073, and by Tongji Hospital Top Ten Translational Medical Research Projects, Grant No. 2016ZHYX20.