Hyperpigmentation is a type of pigmentary disorder induced by overexpression of melanin content activated severe esthetic problems as melasma, freckle, ephelides, lentigo and other forms on human skin. Several whitening agents have restricted use because of their side effects or stability such as kojic acid, ascorbic acid and hydroquinone can act as cytotoxic substance which associated to dermatitis and skin cancer. To find for the safe substance, this study aimed to find for the ability of several components in Sucrier banana peel (SBP) extracts to inhibit melanogenesis process through p38 signaling pathway in B16F10 mouse melanoma cells. Tyrosinase activity and the cellular melanin content were dose dependent manner decreasing after SBP treatment. Furthermore, SBP decreased the expression of melanogenesis relate protein as microphthalmia-associated transcription factor (MITF) and tyrosinase protein after 24 hours incubation with α-melanocyte stimulating hormones (MSH) stimulating. The findings demonstrated that SBP contained an effective agent for hyperpigmentation inhibitor through p38 signaling pathways without any effect to ERK pathway, and subsequent down-regulate MITF expression and tyrosinase enzyme family production.

Melanin is produced within melanosome which is an important organelle inside the melanocyte cells. Melanocyte is located in the basal layer of skin epidermis. After production process, melanin is pigment responsible for skin, hair and eye coloration which function as naturalize antioxidant, detoxification agent, and powerful-cation chelator also can act as universal protection against UV damage [1]. Abnormal melanin production can cause pigmentary disorder such as hypopigmentation and hyperpigmentation. Hypopigmentation causes vitiligo, albinism and abnormal hair problems while hyperpigmentation causes freckles, melasma, age spot and post-inflammatory hyperpigmentation. Genetic predisposition, hormonal changes especially estrogen also others such as liver disease, tumor, cancer, malnutrition or irregular function of pituitary gland are the intrinsic factors including extrinsic factor likes UV exposure, toxic substances are the major cause of hyperpigmentation [2].

Tyrosinase is a rate limiting step enzyme that targets the process of both stimulating and inhibiting the melanin production process. Melanin stimulation is used as a tanning agent or hair depigmentation treatment. Tyrosinase expression is controlled by microphthalmia-associated transcription factor (MITF) which is melanocyte-specific transcription factor that controlled melanocyte differentiation, proliferation and survival [3, 4]. The responsibility of MITF to melanogenisis is to increase tyrosinase expression by binding to DNA in the structure of homodimer or hetero dimer with MiT protein, these binding site involving E-Box and M-Box flanking thymidine nucleotide which stimulates the continuously steps to melanogenic enzyme production such as tyrosinase-related protein 1 (TRP-1), tyrosinase- related protein-2 (TRP-2) and dopachrome tautomerase. Regulation of MITF starts from signal transduction after α-MSH bind to MC1R receptor which stimulates mitogen-activated protein kinase (MARKs) which is serine/threonine kinase and also include extracellular signaling-regulated kinase (ERK) and also p38 as well. Several studies found that melanin synthesis is controlled by several signaling pathways such as phosphotidylineasital-3-kinase (PI3K/AKT) can be suppressed by natural substances which contain polyphenol group through ERK signaling pathway of B16F10 mouse melanoma cells [5,6].

This study aimed to find for the effect on melanogenesis inhibition from Sucrier banana peel (SBP) extracts. SBP may contain several types of polyphenolic compounds that act as tyrosinase inhibitor such as catechin, procyanidin, ferullic acid, gallic acid which detected by expression of ERK signaling pathway that effects the production of melanogenic enzymes such as TRP-1 and TRP-2 [7-10].

Totally ripped (7 days after harvesting) Sucrier banana (musa spp.) peels from Kampangpetch Province, Thailand. Washed banana peels with water then sun-baked until totally dried, grinded by blender and extracted by soaking with 60% methanol for 24 hours (MW24), centrifuged with 95% ethanol for 10 minutes at 4 ℃(E4), boiling in DI water at 60 ℃ for 20 minutes (W60) and boiling in 95% methanol at 60 ℃ for 20 minutes (M60). Next step was to decrease the volume with rotary evaporator at 40 ℃ and was to dry by freeze dryer Christ Alpha- 4 LD plus.

B16F10 mouse melanoma cells were cultivated in Dulbecco's modified Eagle's medium (DMEM) supplemented with 10% fetal bovine serum at 37 ℃ in an incubated with 5% CO2. After 24 hours incubation, then changed the medium to serum free media with difference concentration of Sucrier banana peel (SBP) extracts with α-MSH stimulation. Then cells were harvested by trypsinization for the next experiments.

Cytotoxicity of SBP extracts was measured by MTT assay. The cells (5 × 10 3) were seeded to 96 well plate and cultivated in DMEM for 24 hours at 37℃ in an incubated with 5% CO2 then changed the medium to serum free media with difference concentration of SBP extracts for 48 hours. After treatment, dscarded the medium and washed twice with cold PBS, 100 ul of MTT solution (5mg/ml) was added into each well, incubated at 37 ℃ for 4 hours then measured by the ELISA reader at 420 nm.

Harvested cells were lysed in cold lysis buffer (20 mM sodium phosphate pH 6.8, 1% tritonX-100, 1mM PMSF and 1 mM EDTA) then centrifuged 1,200 rpm at 4 ℃ for 10 minutes to separate supernatant out while melanin pellets were dissolved in 200 ul 1N NaOH for 60 minutes at 80 ℃. ELISA reader were used for measuring the absorbance at 415 nm. and calculated compared to the protein content from bicinchoninic acid (BCA) protein content assay (Pierce Bitechnology, Packford, IL, U.S.A).

All information was be analyzed by mean ± standard deviation (SD). The one way ANOVA test is used to measure the different between each set of information. P-value that less than 0.05 was considered as statistically significant.

The objective of this experiment was to measure the efficacy of the solvents which used for extraction and also method which can extracts phenolic compound as much as possible. Most of phenolic compounds dissolve very well when extract with high polar solutions such as water, methanol (MeOH), ethanol (EtOH), acetone, ethyacetate, propanol, acetic acid or their mixture in various portions [11]. Figure 1A show that W60 can extract phenolic compound as much as 16.24 µg/ml followed by M60, E4 and MW24 with total phenol 13.89, 9.21 and 8.38 µg/ml respectively. Cytotoxicity of SBP was experimented by MTT reduction assay which measured the reduction environment from mitochondrial function of living cells by measuring the formazan formation to access cytotoxic effects. The result found that SBP at indicated concentrations (up to 500 µg/ml) with 48 hours incubation. Cytotoxicity shows no significant effect after SBP treatment (Fig. 1B). 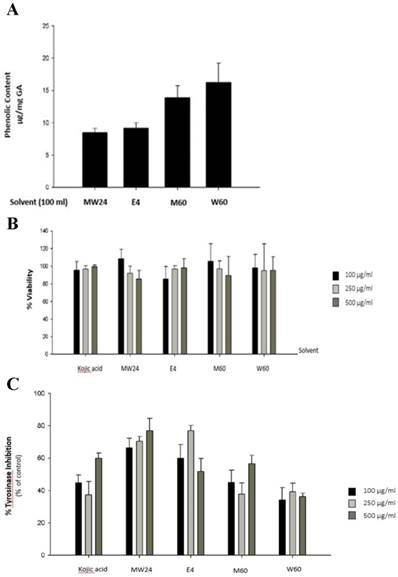 In melanogenesis, MAPKs kinase family especially ERK and p38 are related directly with this procedure [12]. The ERK signaling will down-regulate while p38 signaling will up-regulate during occurrence of melanin production. However, phosphorylation of ERK and p38 will have reverse procedure of melanin production. The results showed clearly effect after SBP (MW24) treatment with α-MSH activated by immunoblotting to MAPK signaling pathway. SBP (MW24) slightly decreased p38 protein expression and up-regulate phosphorylation of p38. This result showed the way to inhibit melanogenesis process through p38 pathway without any effect to ERK but phosphorylation of ERK protein level slightly decreased after α-MSH and SBP (MW24) treatment as showed in Fig. 4.

After total amount of phenolic compound was known, we can proceed to pinpoint type and amount of flavonoid and carotenoid substances. This we found SBP (MW24) extracts contain ferullic acid as high as 906.62 mg/100g and also found small amount of lutein and β-carotein which categorized in carotenoid group at 1.23 and 2.37 mg/100g respectively. Through SBD (MW24) still has high percentage of tyrosinase inhibition. Therefore, SBP (MW 24) was be selected for the further studied.

From cytotoxicity testing, no significant cytotoxic was found from SBP although amount of usage concentration was up to 500 µg/ml. possibly because of the small amount of carotenoid within extraction has the capability of protecting cells. Substances in this group have antioxidant properties which can terminate poison through Cytochrome P-450 especially β-carotein that has stimulating role of immune functions by interacting with Reaction Oxygen Species (ROS). This will support effectiveness to phenolic compound which has ROS scavenging effect property to decrease inflammatory cytokine [14]. So, SBD (MW24) not only has no toxic effect, it has the role of cell protection as well.

Our study also found that SBP (MW24) has capability of inhibiting melanogenesis of B16F10 cells. The expression of tyrosinase and MITF were reduced after SBP (MW24) treatment in both assessed with mushroom tyrosinase and Western blot analysis in a dose dependent manner. This test clearly indicated that SBP (MW24) can suppress the creation of melanin by down-regulate p38 signaling pathway and up-regulate phosphorylation of p38 which activate MITF protein degradation then effect to decrease the expression of melanogenic enzyme family such as tyrosinase. Suppression of p38 decreases to cAMP Response Binding Protein (CREB) functions which is an important transcript factor that works with PAX3 and SOX10 that attaches to M-BOX of MITF gene to activate MITF protein expression that effect to melanin production process and cells survival activity [15]. In general, activating of ERK leads to phosphorylation of MITF at serine 73 which causes ubiquitination and eventually degradation. Most of natural compounds can inhibit melanogenesis through the stimulation process of ERK signaling pathway, but SBP (MW24) was not significantly influence ERK signaling pathway [16]. 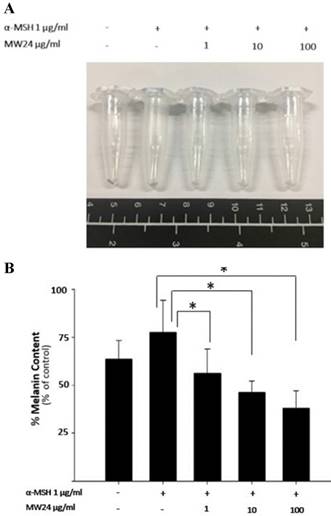 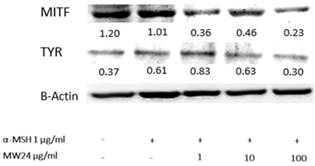 SBP (MW24) inhibited melanin production through ERK pathway. Primary B16F10 cells were treated with SBP (MW24) at the concentration of 100 µg/ml for 24 hours β-actin the quantitative control was used for relative proteins expression comparison as shown by inserted number. 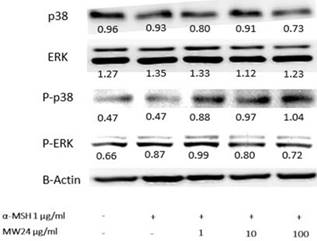 Many research found that phenolic compounds and carotenoid can inhibit the production of melanin pigments because of beta-carotene has the capability of absorbing UVB photon while also has the property of the lipid soluble antioxidant and phenolic compound can activate Nrf2, block ROS receptor, decrease inflammatory cytokine production and induce y-GSC expression which support to our study but in the difference way of melanogenesis inhibition [17]. Other than that ferulic acid found in SBP (MW24) was the main substance within group of phenolic compounds confirmed by several studies that it has the property of anti-melanogenesis because it can modulate vascular endothethelial growth factor (VEGF) expression, induces nitric oxide synthase, act as tumor suppressor gene and also relate to the procedure of melanin pigments production. In SBP (MW24) solution, ferulic acid can increase effectiveness when mix with carotenoid or other phospholipids because the water solubility, lipid solubility and bioavailability will be increased resulted to improve the melanogenesis inhibition of B16F10 cells [18]. The implication of all the results concludes that SBP (MW24) could reduce melanogenesis effectively.