Objective: To demonstrate the differences in intrauterine fetal deaths and neonatal deaths between small for date (SFD) and Non-SFD neonates by applying a novel classification from both Z scores of placental weight (PW) and fetal/placental weight ratio (F/P) to small for gestational age (SGA) neonates.

Methods: From 93,034 placentas/infants of mothers who vaginally delivered a singleton infant (Japan Perinatal Registry Network database 2013), SGA (n=7,780) was chosen according to the reference to Japanese neonatal growth chart. They were divided into two subgroups: SFD (body weight and height less than the 10th percentile, n=3,379) and Non-SFD (only body weight less than the 10th percentile, n=4,401). Z scores of PW and F/P based on the standard curves for sex-, parity-, and gestational-age-specific PW and F/P were calculated. The population was classified into 9 groups according to the combination of 'low vs. middle vs. high' i) PW Z score and ii) F/P Z score. In both i) and ii), ± 1.28 standard deviations in the Z scores were used for classifying low vs. middle vs. high, with 3×3 making 9 groups. From top-left to bottom-right, we labeled the groups as Group A to Group I.

Conclusion: Assessment of SGA neonates by dividing them into SFD and Non-SFD neonates and application of a 9-group classification by PW and F/P Z scores were informative to understand the pathophysiological involvement of an imbalance between placental and fetal sizes.

The definition of small for gestational age (SGA) by Battaglia and Lubchenco [1] as birthweight below the 10th percentile for gestational age, has been widely used. On the other hand, in consideration of the pathophysiological contribution of small composition, small for date (SFD) newborns were further classified as both of body weight (BW) and height less than the 10th percentile [2-5]. Therefore, SGA neonates are composed of two subgroups of SFD and Non-SFD neonates (Figure 1). However, the differential perinatal outcomes of SFD neonates are yet to be fully understood in comparison with those of Non-SFD neonates among SGA newborns.

Pathophysiological changes in placentas are closely associated with the development of SGA neonates [6-8]. We, and others, have reported the norms for placental weight (PW) in order to analyze the contribution of placental size to fetal development [9-11]. A possible important contribution of an imbalance between placental and fetal sizes has been demonstrated in the development of SGA by assessment using the fetal/PW ratio (F/P) [12]. Recently, we proposed a novel 9-group classification according to PW and F/P, and its usefulness in assessing the underlying characteristics of imbalance between placental and fetal sizes in perinatal death [2].

The concept of SGA, SFD, and Non-SFD neonates.

The study protocol was reviewed and approved by the Ethics Committee of Hamamatsu University School of Medicine, which is conformed to Helsinki Declaration of 1975, as revised in Fortaleza 2013. (Date of approval: 2017/08/04, reference number: 2017-157). Individual data were collected from the Japan Perinatal Registry Network database 2013, which is managed by the Japan Society of Obstetrics and Gynecology and included 187,180 newborns (18.2% of entire Japanese ones). Ob/Gyn physicians entered the data in 300 institutions during 2013. The Registry has contributed to the perinatal epidemiological investigations in Japan [2, 13-15].

As described previously [13], after manually removal of blood clots, the untrimmed placenta together with the membranes and umbilical cord was weighed by the midwife. In more detail, the placenta was weighed without drainage within 2 h after delivery using standardized scales of medical device grade. The F/P was calculated by dividing BW by PW in grams [9].

The neonatal growth chart (New Japanese neonatal anthropometric chart) in general use in Japan, published by Itabashi et al. in 2010 [16], was generated based on data from vaginal deliveries, because the BW of infants from cesarean deliveries was significantly lighter during the preterm period. Thus, in this study, PW and F/P were analyzed only in placentas/infants delivered vaginally. The study population consisted of 93,034 placentas/infants from women who vaginally delivered a singleton infant between 22 and 41 weeks of gestation. SGA infants (BW less than the 10th percentile, n=7,780) were chosen from the eligible cases according to the above-mentioned neonatal growth chart [16]. They were divided into two subgroups: SFD (BW and height less than the 10th percentile, n=3,379) and Non-SFD (only BW less than the 10th percentile, n=4,401) (Figure 1).

The 9-group classification by PW and F/P ratio was carried out as described previously [2]. In brief, standard curves for PW and F/P were constructed using the LMS [skewness (L), median(M), and coefficient of variation(S)] method, according to fetal gender (male or female) and maternal parity (nulliparous or multiparous), and were represented as the 10th, 50th, and 90th percentiles for every gestational week (GW) and day. The LMS method was used to calculate three sets of values for each gestational day [17]. Each Z score of the PW and F/P was then calculated using the formula; Z = [(sample data/M) L - 1]/ (L x S). We classified the study population into three groups as follows: low Z score group, less than -1.28 standard deviations (SD); intermediate Z score group, -1.27 to 1.27 SD; and high Z score group, over 1.28 SD considering that the 10th percentile and 90th percentile of the data were regarded to be almost equal to -1.28 and 1.28 SD of the data, and the Z score represents a marker of deviation from the average. The resultant 9 groups were labeled them from top-left (Group A) to bottom-right (Group I), and Group E was considered to be a control for the remaining eight groups, as described previously (Figure 2) [2].

Poor perinatal outcomes (cases) were defined as IUFD and ND and the definition of neonatal death is death from any reasons within 4 weeks after birth. We analyzed the difference in frequencies of IUFD and ND between the SFD and Non-SFD subgroups among SGA neonates. The results were expressed as the means ± SD. Statistical analyses were performed using JMP 13.1.0 software (SAS Institute Inc.). For categorical variables, Fisher's exact test was used. A p-value <0.05 was considered significant.

Perinatal backgrounds of the subjects

Characteristics of the nine groups among SFD neonates and Non-SFD neonates.

A total 7,780 SGA neonates were divided into nine groups according to the combination of 'low vs. middle vs. high' i) PW Z score and ii) F/P Z score as described in the Methods. 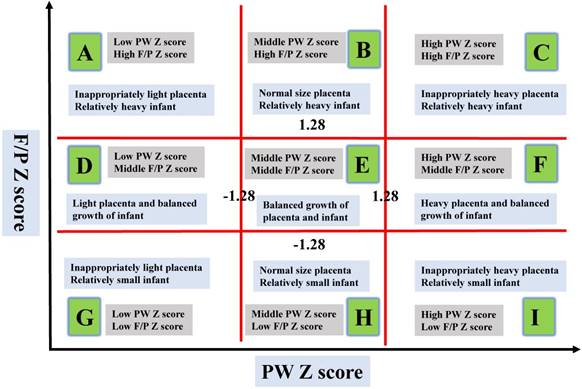 Scatter chart of PW Z scores against F/P and the distribution of groups of entire SGA (SFD and Non-SFD) neonates (A), IUFD (B) and ND (C) in the 9-group classification made using the Z scores of PW and F/P. 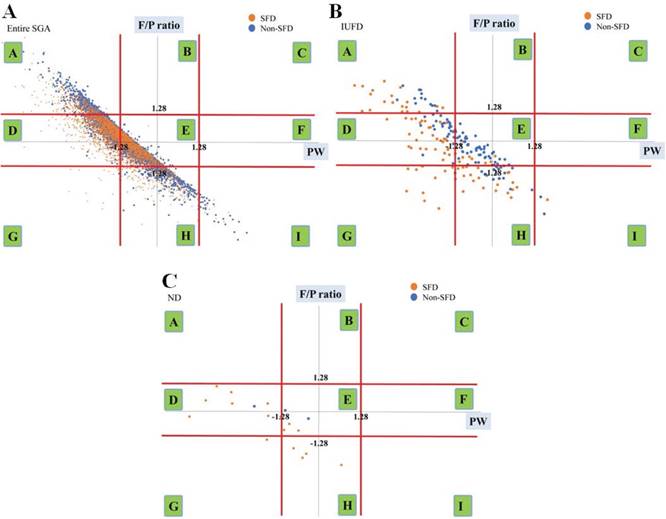 Comparison of IUFD and ND between SFD and Non-SFD groups in entire SGA.

Fisher's exact test was carried out between SFD and Non-SFD subjects with vs without IUFD or ND.

Comparison of IUFD and ND between SFD and Non-SFD groups in groups A, D, E, G, H, and I.

Fisher's exact test was used between SFD and Non-SFD subjects with vs without IUFD, ND.

Incidences of IUFD was significantly higher in Non-SFD neonates than those in SFD neonates in Group E using Fisher's exact test (Table 4). The net numbers of IUFD were highest in Group E in Non-SFD neonates but not SFD neonates (Figure 4A). In the textbook Williams' Obstetrics [18], the body type of FGR was hypothetically divided into two types, i.e. symmetrical pattern with both small head and body and asymmetrical pattern with obviously small body compared with the head (thin body composition) by ultrasound. Symmetrical and asymmetrical FGR were hypothesized to be associated with the fetal origins and insufficient supply of nutrients to the fetus because of placental dysfunction, respectively. Neonates in the Non-SFD subgroup had low BW and relatively high height, which could be regard as a thin body composition, and this might be closely related to the hypothetical theory of asymmetrical FGR underlined with potential intrauterine poor nutrient supply via the placenta. In consideration of this concept, we speculated that relative poor placental function might be linked with the higher incidence of IUFD in the Non-SFD subgroup (low BW and relatively high height) in SGA neonates, specifically in Group E with well-balanced growth pattern of the fetus and placenta.

The constitution of subclasses in IUFD (A) and ND (B) in SFD and Non-SFD neonates. 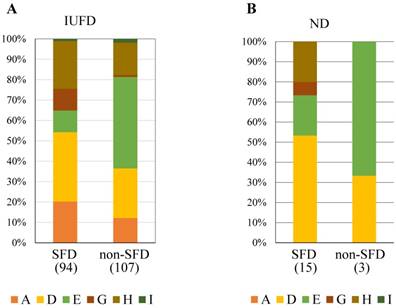 Symmetrical/asymmetrical pattern is the concept of fetal assessment using ultrasound, whereas SFD/Non-SFD was diagnosed by neonatal measurement after birth. It is necessary for this speculation to clarify the exact relationship between fetal ultrasound findings and neonatal physique measurement. Nevertheless, the application of the present 9-group classification to SGA neonates identified a critical different fetal as well as neonatal prognosis between Group D and Group E. Moreover, it was noted that Group D and Group E would be regarded as identical using only the F/P.

Among SGA neonates who had higher morbidity and mortality rate than appropriate for gestational age neonates, we suggested that Non-SFD and SFD neonates tended to have rather high risks during the fetal and neonatal periods, respectively, which was mainly characterized by the differential prognosis in Group D and Group E using our 9-group classification. Therefore, the application of this 9-group classification to SGA neonates could be useful to understand the pathophysiological involvement of an imbalance between placental and fetal sizes, especially in relation to the clinical importance of the SFD subgroup.

This study had some limitations. First, this study was based on the Japan Perinatal Registry Network database, which is constructed from data from secondary and tertiary facilities; therefore, it did not include nationwide delivery. However, this large amount of data is considered relevant for evaluating the relationship of PW and F/P in SFD and Non-SFD neonates. Second, we excluded cases of Cesarean section because of their smaller BW than of vaginal deliveries [16]. Third, the procedure for measuring placental weight was not identical among facilities, but the above-mentioned procedure is typical in Japan. In addition, untrimmed placental weight obtained by this procedure could affect the F/P, but a previous report on trimmed and untrimmed placentas showed a high correlation between them [19].

The comparison between SFD and non-SFD neonates with a 9-group classification using Z scores of PW and F/P to SGA neonates is useful to understand the pathophysiological involvement of an imbalance between placental and fetal sizes, especially concerning the clinical importance of SFD subcategories among SGA neonates.

We thank Mr. Norio Sugimoto for his statistical help.