Because of its devastating effect on liver function, hepatitis B virus (HBV) poses a serious threat to the health of humans; approximately 360 million people around the world have been found to be positive for hepatitis B surface antigen (HBsAg) [1]. A variety of liver diseases such as hepatocellular cirrhosis, hepatocellular carcinoma, and acute-on-chronic hepatitis B liver failure (ACHBLF) could possibly occur with the development of chronic HBV infections [2, 3]. Among those liver disorders, ACHBLF is considered to be the most serious because of the acute deterioration of liver function, multiorgan failure, and high mortality rates of 50% to 90% [4-6]. It has been estimated that up to 0.12 million people in Asia die of ACHBLF annually [7]. Liver transplantation is the primary rescue therapy strategy thus far, but it is highly limited by scarcity of liver donors and other reasons such as medical expense [8, 9]. Developing effective therapy methods while minimising the dependence of liver transplantation on the external liver source would be a better strategy to deal with ACHBLF. Nevertheless, the unclear pathogenesis of ACHBLF highly restricted the advancement of new treatment methods. It is thus important, yet challenging, to provide insight into the mechanism of ACHBLF development.

According to the primary pathological mechanism, dysregulated immunity by HBV infection and cell-mediated lymphocytotoxicity reaction result in an imbalance of proinflammatory cytokines which leads to the development of ACHBLF [10, 11]. NLRP3 is related to innate immunity and can produce proinflammatory cytokines via caspase-1[12]. Inflammasomes are cytosolic sensors that detect pathogen infections, tissue damage, or metabolic imbalances, and are helpful in maturation and release of several proinflammatory cytokines. The NLRs family consists of NLRs family pyrin domain containing 1(NLRP1), NLRs family pyrin domain containing 3(NLRP3), and NLRs family CARD domain containing 4 (NLRC4). NLRP3 and absent in melanoma 2 (AIM2)-like receptors are basic components of inflammasomes [13, 14]. NLRP3 is the best characterised inflammasome that can recognise a range of substances including pathogen-associated molecular patterns, danger associated molecular patterns, and environmental irritants [15]. NLRP3 inflammasome activation contributes to the maturation of caspase-1, which further cleaves pro-interleukin (IL)-1β and pro-IL-18 into mature forms [16, 17]. Studies in recent years reveal that NLRP3 plays a pivotal role in liver cirrhosis development [13] and it has a relationship with proliferation and metastasis of hepatocellular carcinoma [18]. Its activation also results in hepatocyte pyrotosis and the accelerated progression of NAFLD to NASH [10, 15]. 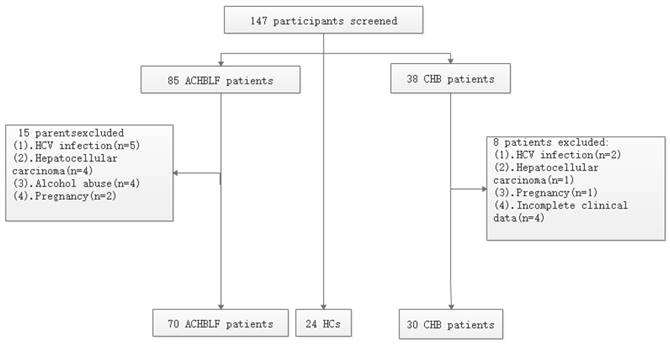 In this study, we aimed to investigate NLRP3 messenger RNA (mRNA) expression in peripheral blood mononuclear cells (PBMCs) from patients with ACHBLF and explore the potential effect of glucocorticoid on NLRP3 in this disease.

This study consisted of 124 patients admitted to Qilu Hospital of Shandong University May 2016 through December 2017. There were 70 patients in whom ACHBLF was diagnosed, 30 patients with CHB, and 24 healthy volunteers as controls. Patients with CHB received their diagnosis based on being positive for HBsAg for at least 6 months. According to the Asian Pacific Association for the Study of the Liver [19], patients with ACHBLF were identified with the following characteristics: (a) CHB history; (b) progressive jaundice (TBIL 85mmol/L); (c) increasing international normalised ratio (INR) of 1.5 or decreasing prothrombin activity (PTA) to 40%; and (d) onset of ascites and/or hepatic encephalopathy (HE) within 4 weeks. Exclusive criteria included co-infection with human immunodeficiency virus; hepatitis C virus; and hepatitis D virus; autoimmune liver diseases; metabolic liver disease; severe alcohol abuse; pregnancy; and liver tumours. The flowchart of selection of participants is shown in Figure 1.

Before this study, no patients had used corticosteroids for more than 6 months. Conservative treatment including nutritional support, disinfection and isolation especially oral care, reduction of aminotransferase, hepatoprotective medicines that can promote the regeneration and the repair of damaged hepatocytes and protect or mitigate injury to hepatocytes was provided to patients with ACHBLF. Before the glucocorticoid treatment, 39 patients received antiviral therapy and 31 patients did not. Of the 39 patients undergoing antiviral treatment, 25 underwent entecavir treatment at a dose of 0.5 mg daily and 14 patients received 10 mg of adefovir per day. In addition, of the 39 patients, 3, 9, 11, and 16 underwent antiviral treatment for 1 to 6 months, 6 to 12 months, 12 to 24 months, and more than 24 months, respectively. After ACHBLF was diagnosed, nucleoside analogues such as adefovir and entecavir were administered to patients to inhibit viral replication when serum HBV-DNA level was more than 104 copy/mL[19]. Fifty-six patients underwent antiviral treatment. Among the 56 patients, 36 received entecavir treatment at a dose of 0.5 mg daily and 20 patients were administered 10 mg of adefovir per day.

Human IL-1β and IL-18 enzyme-linked immunosorbent assay (ELISA) kit (4 A Biotech Co., Ltd, Beijing, China) were used to detect IL-1β and IL-18 in plasma according to the manufacturer's instructions. The results were measured at 450 nm within 10 minutes using an enzyme-labelled instrument (Awareness USA).

(aetiology: 0 if cholestatic or alcoholic; 1 otherwise).

Quantitative variables were expressed as mean ± standard deviation; categorical values were expressed as number (percentage). Differences in quantitative variables were analysed using Mann-Whitney U and Kruskal-Wallis tests. Differences in categorical variables were analysed using chi-square test. Spearman correlation was used to evaluate the correlation between variables and the diagnostic value of NLRP3. Statistical analyses were performed with SPSS 21.0 (SPSS, Chicago, IL, USA). All statistical tests were two-sided and value of P < 0.05 was considered to be statistically significant.

Baseline characteristics of the individuals enrolled in the study

Expression of NLRP3-related cytokines and genes 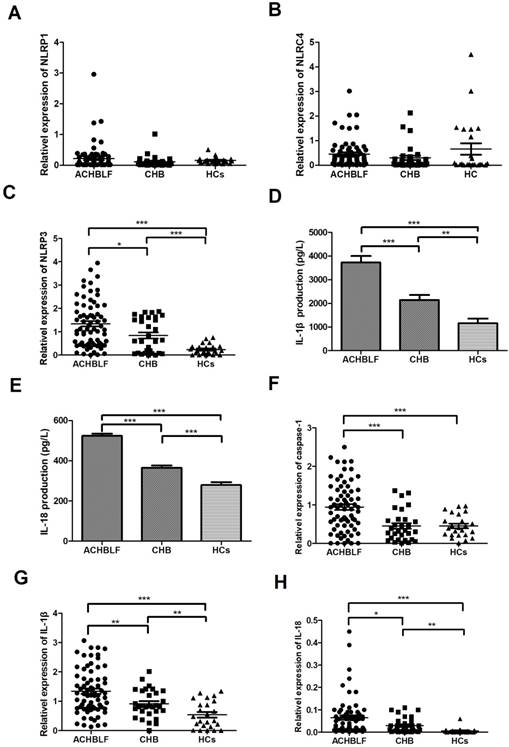 Glucocorticoid effect on liver function in patients with ACHBLF 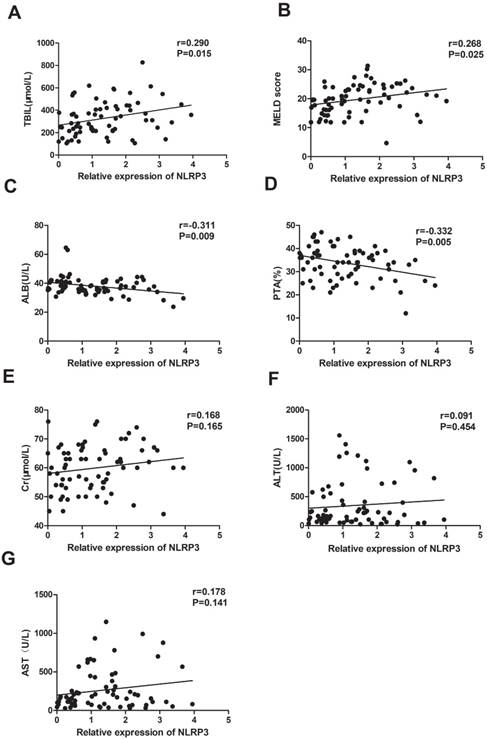 There are many reasons that ACHBLF occurs. The reactivation of HBV was considered the leading cause of ACHBLF [19]. Patients with ACHBLF caused by hepatotoxic drugs and herbal medicines account for a large number in the Asia-Pacific region [22, 23]. Alcohol abuse was also a major cause of ACHBLF [24]. Various types of infections could contribute to liver failure, including bacterial, parasitic, fungal, spirochetal, protozoal, and helminthic in patients with CHB [19]. ACHBLF is regarded as the most serious liver impairment because of its acute deterioration of liver functions, multi-organ failure and high mortality of 50-90% [4-6]. Glucocorticoid can prevent hepatocytes from necrosis and progressive acute deterioration by protecting cell membrane, lysosomal enzymes, and mitochondria [11, 25] . Glucocorticoid can rapidly inhibit excess immune response and inflammatory reaction, and has been confirmed to be effective in early stage of ACLF [26]. 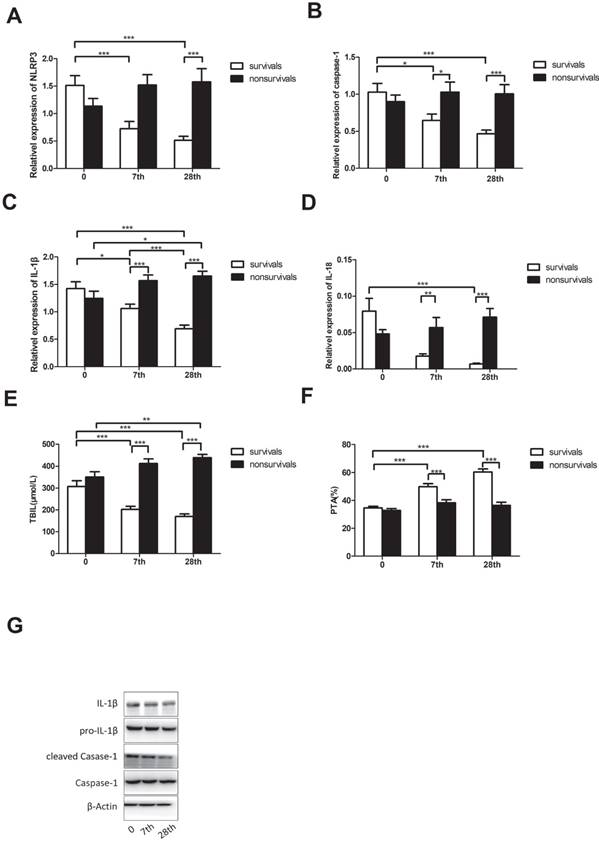 NLRP3 inflammasome is a large intracellular multiprotein complex that consists of an inflammasome sensor molecule (NLR) and adaptor proteins, such as apoptosis-associated speck-like protein containing a caspase-recruitment domain (ASC) and the precursor procaspase-1[27]. NLRP3 was the best characterised member of the NLR family, and it is critical in regulating innate immune response. NLRP3 inflammasome activation leads to the maturation of caspase-1, which further cleaves pro-IL-1β and pro-IL-18 into mature forms. In our study, the mRNA level of NLRP3 of ACHBLF patients was higher than that of patients with CHB and HCs. NLRP3 downstream gene caspase-1 was also activated, and this is consistent with NLRP3-caspase-1 inflammasome as a critical inflammatory mediator propelling the host response against infection, injury, and disease [28]. The expression of proinflammatory cytokines increased significantly under liver failure [29], and we found the mRNA level of IL-1β and IL-18 in patients with ACHBLF was higher than that of CHB and HCs in this study. The result was also confirmed by the plasma level measured through ELISA. TBIL and PTA are often used to judge patients with ACHBLF, and we found that the NLRP3 mRNA level of these patients was positively correlated with TBIL and negatively correlated with PTA. All results indicate that NLRP3 makes a contribution to the progression of ACHBLF and is related to disease severity. Both dynamic changes of NLRP3 and related cytokines/ genes decreased gradually in patients who survived during glucocorticoid treatment in our survey. These results demonstrate that glucocorticoid can decrease IL-1β and IL-18 by downregulating NLRP3.

There are some limitations to this study. First, the number of patients with ACHBLF who received 28 days of glucocorticoid treatment is relatively small. We believe that the validation of our findings would be performed in larger, multicentred, prospective cohorts before its clinical usage. Second, coagulopathy and high bleeding risk made it unfeasible to obtain liver biopsy specimens from patients with liver failure. So it is impossible to detect the NLRP3 expression in liver tissue directly. Third, NLRP3 was also considered to lead to pyroptosis, which was responsible for liver failure; its precise mechanism of pathogenesis remains to be determined [30].

In summary, our results demonstrated that the expression level of NLRP3 is increased and positively correlated with disease severity in patients with ACHBLF. The findings suggest that NLRP3 may take part in the pathogenesis of ACHBLF disease. Our results also showed that the expression of NLRP3 decreased gradually after glucocorticoid treatment in patients who survived. The findings further indicate NLRP3 may play a role in pathogenesis of ACHBLF disease.

Guarantor of the article: Dr Kai Wang accepts full responsibility for the conduction of the study. He had full access to the data and control of the decision to publish.

1. Akhtar F, Rehman S. A Public Health Analysis on Gaps in Disease Monitoring and Opportunities for Improved Care for the Management of Hepatitis B and C. Cureus. 2018;10(1):e2077