Background: Epigenetic silencing of tumor suppressor genes plays important role in acute myeloid leukemia (AML). Recently, SPRED1, a negative regulator of the RAS MAPK pathway, is identified as a tumour suppressor downregulated in AML. However, little is known regarding its underlying dysregulation in AML. In this study, we investigated methylation status of SPRED1 promoters and their association with mRNA levels in AML.

Acute myeloid leukemia (AML) is a malignant clonal disease of hemopoietic stem cells characterized by the inhibition of differentiation and subsequent accumulation of cells at various stages of immaturity, and also by the decreased production of normal hemopoietic ingredients. Various abnormal signaling pathways are involved in adult AML. The Ras/MAPK signaling pathway has already been shown to be involved in the pathogenesis of AML, including distinct prognostic genes, such as NF1 [1], NRAS, and KRAS [2]. SPRED1 is an emerging regulator of Ras/MAPK signaling pathway aberrant in AML [3-4].

Human sprout-related EVH1 domain-containing 1 (SPRED1) gene is found in the rat osteoclast cDNA library, as shown by Yoshimura and his colleagues in as early as 2001 [5]. It is located in 15q13.2 containing seven exons. Human SPRED1 protein consists of 444 amino acids and 3 domains: EVH1 domain at the N-terminal, c-kit domain in the middle, and SPRY-related domain at the C-terminal, belonging to the SPRED family together with SPRED2 and SPRED3 [5]. The expression of human SPRED1 have been discovered dominantly in lung, brain, spinal cord, and kidney, while it is low in liver, pancreas, prostate, thyroid, muscle, skeleton, and bone marrow [6-7]. SPRED1, interacting with the NF1 protein‒neurofibromin, downregulates the Ras/MAPK signaling pathway [8-10]. Ras/MAPK pathway and cell malignancy transformation were found to be inhibited by SPRED1 in hepatocellular carcinoma, prostate cancer, and lymphoma cell lines. Also, SPRED1 was identified as a tumor suppressor of the Ras/MAPK pathway and downregulated in pediatric AML [4]. However, the underlying cause of SPRED1 downregulation was not clear. Although the mutation of SPRED1 has a predisposition to leukemia [11], subsequent studies indicated that the mutation and deletion of SPRED1 were not common in AML [4,12].

Epigenetics refers to changes in gene expression but without changes in the DNA sequence itself. Currently, the most widely studied epigenetic modification in humans is DNA methylation, which occurs almost exclusively in the context of CpG dinucleotides that control the transcriptional activity of genes [13] and is observed in various diseases, such as glioblastoma [14], lymphocytic leukemia [15], and AML [16]. Recent years have witnessed a large amount of genomic data; however, it has already been reported that almost 50% of all patients with AML belonging to the intermediate-risk group lack cytogenetic abnormalities [17], and a great proportion of the patients carry unknown AML-associated driver genes [18-19]. It is apparent that epigenetic modifications in AML are more widespread than can be explained by recurrent somatic mutations alone.

The goal of the present study was to explore the epigenetic status of SPRED1 and its influence on AML.

Bone marrow samples were obtained prior to treatment from 16 de novo patients with non-acute promyelocytic leukemia (non-APL), classified according to the criteria given by the World Health Organization [20], and three patients who achieved complete remission (CR) after induction treatment. Patients younger than 14 years old were excluded from this study. The median age of patients was 34.5 years old (range, 16 to 67 years). The median percentage of blast cells in bone marrow was 66% (range, 24.5% to 95.2%). The treatment and the response assessment were based on Chinese expert consensus on treatment of AML (2009) [21]. CR was defined as a bone marrow with normal hematopoiesis, blasts in bone marrow less than 5%, granulocyte count≥1.0 × 109/L, platelet count≥100 × 109/L, no myeloid blasts in the peripheral blood and no extramedullary disease. Control samples were taken from seven adult healthy volunteers with median age of 47 years old (range, 24 to 66 years). The study was approved by the Ethics Committee of the First Affiliated Hospital of China Medical University (# AF-SOP-07-1.0-01).

Quantitative reverse transcription polymerase chain reaction (PCR) was performed using 7900 real-time PCR system and SYBR Green (TaKaRa) as a double-stranded DNA-specific dye. Target genes were amplified with primers designed by Invitrogen (Shanghai, China). Specific primer sequences of SPRED1 were as follows: forward: 5'-GATGAGCGAGAGACGGAGAC-3' and reverse: 5'-GTCTCTGAGTCTCTCCACGGA-3'. The following protocol was used for real-time PCR: 1 cycle at 95°C for 30 s, followed by 40 cycles at 95°C for 5 s and 60°C for 34 s, and then 1 cycle at 95°C for 15 s, 60°C for 1 min, 95°C for 15 s, and 60°C for 15 s. A melting curve was generated for every PCR amplicon to check the specificity of the PCR reaction. The relative level of SPRED1 was analyzed using the ABI 7900 Sequence Detection System (Applied Biosystems, CA, USA) and calculated using the 2-ΔΔCt method.

Data were analyzed using GraphPad Prism (version 5.0; GraphPad Software Inc., CA, USA) and SPSS (version 22; SPSS Inc., IL, USA). The Mann-Whitney test was performed to evaluate the significance of any differences between the patients with AML and controls. The Spearman correlation analysis was performed to evaluate the correlations between methylation statuses and mRNA levels of SPRED1 genes. All statistical analysis was two sided, and a P value <0.05 was considered statistically significant.

Increased methylation level of SPRED1 in patients with non-APL 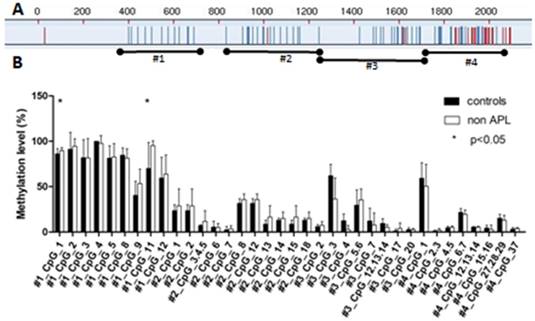 Characteristics and SPRED1 methylation level of 16 cases of non-APLs

The mRNA expression levels of the SPRED1 gene were determined using qRT-PCR in 16 patients with de novo non-APL and 7 healthy controls. The relative expression levels of SPRED1 mRNA were significantly lower in patients with non-APL (0.034 ± 0.041) compared with controls (1.32 ± 0.46) (P = 0.000008). A correlation analysis was performed in patients with non-APL to identify any relationship between SPRED1 methylation status and respective mRNA levels. The methylation rate of #1_CpG_11 was negatively correlated with the SPRED1 mRNA level (r = -0.558, P = 0.013, Fig. 2A). However, no significant correlation was observed between the methylation rate of #1_CpG_1 and SPRED1 mRNA expression (r = -0.103, P = 0.675, Fig. 2B).

The correlations of #1_CpG_11 methylation level of SPRED1 with a series of prognostic relevant clinical and laboratory parameters of AML, including age, gender, French-American-British (FAB) subtypes, white blood cell count, hemoglobin (Hb), platelet count, blast cells in bone marrow, karyotype, gene mutation, and risk stratification, were investigated. No significant difference was found in the methylation level at a unit of #1_CpG_11 between subgroups of prognostic parameters. It was worth noting that the highest methylation level was observed in patients with DMNT3A mutations (Table 2).

Distribution of different gene mutations in patients with AML with the methylation of SPRED1 (n = 16). AML samples were dichotomized according to the median methylation level (97%) of SPRED1 into the low-level or high-level methlyation of SPRED1. 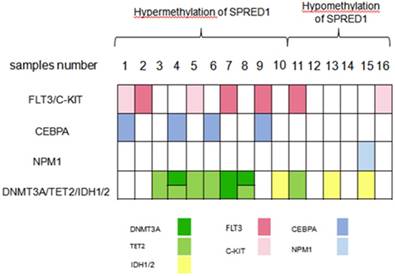 A correlation analysis was performed in patients with non-APL to identify any relationship between SPRED1 methylation status and their respective treatment response. For patients with CR and NR (n =10 and 6, respectively) achievement, the average methylation level of #1_CpG_11 was 94.42% ± 5.99% and 93.5% ± 6.13%, respectively. No significant difference was found in the methylation level of #1_CpG_11 compared with the treatment response (P = 0.56).

In the present study, the quantitative methylation analysis of SPRED1 genes was initially performed in patients with non-APL using the Sequenom MassARRAY platform as a highly accurate, sensitive, and high-throughput method. MassARRAY is an emerging quantitative detection method for DNA methylation in recent years. The MassARRAY system is more efficacious than the bisulfite sequencing PCR (BSP) to reflect the real methylation level of low-methylated regions; it can detect the methylation level as low as 5% [23]. Therefore, it can more accurately determine the correlation with quantitative expression. Significantly increased methylation levels of SPRED1 were found in patients with non-APL, indicating a negative correlation with the methylation rate and SPRED1 transcription level. These findings indicated that changes in the methylation status of SPRED1 might influence gene expression and contribute to the development of AML. Epigenetic control mechanisms are vital in the development and progression of the disease. This includes DNA methylation, histone modification, regulation of mRNA stability, translation by noncoding RNAs, and differential RNA splicing [24]. DNA methylation constitutes an important epigenetic regulation mechanism in many eukaryotes, which has been extensively studied [25]. AML subgroups are defined by diverse DNA methylation patterns, and abnormally methylated genes are identified and related to the clinical outcome [26-28]. It represents a step toward a better understanding of the fact that the tumor suppressor gene SPRED1 is epigenetically silenced in AML. A previous study showed that the expression level of SPRED1 and the incidence rate of tumor invasion and metastasis were negatively correlated [29]. The correlated experiments in vitro and in vivo also showed that the increased expression level of SPRED1 could significantly inhibit tumor cells by suppressing the activity of ERK [30-31]. It was also confirmed that the downregulated expression of SPRED1 correlated with the activation of Ras/MAPK pathway visualized by increased phosphoERK1/2 levels in pediatric AML [4]. Therefore, it was hypothesized that the hypermethylation of SPRED1 led to the decreased SPRED1 expression and activation of Ras/MAPK signaling pathway, facilitating leukemogenesis.

The development of AML is associated with methylation-regulated genetic mutations, including DNMT3A, TET2, and IDH. DNA methylation is performed by DNA methyltransferases (DNMTs), and DNMT3A mutations appear to be associated with poor prognosis [18,32]. Patients with TET2 mutations display overlapping hypermethylation signatures [32]. In this study, although no statistical difference on spectrum of mutations between different methylation levels, the mutations involving epigenetics regulating group, especially. DNMT3A and TET2, was found in patients with higher methylation level of SPRED1. Therefore, mutations in DNMT3A and TET2 might be implicated in the aberrant methylation of SPRED1. Their association with SPRED1 aberrant methylation status is needed to be further clarified. FLT3, NPM1, CEBPA, and c-KIT are related to the risk stratification of AML. Previous reports indicated a significant association between the low expression rates of SPRED1 and FLT3 mutation [4]. However, the present study did not find significant association of SPRED1 hypermethylation and FLT3 mutation. The CEBPA gene encodes a critical transcription factor of hematopoietic cell differentiation [33]. Mutations in double alleles of CEBPA are associated with a favorable clinical prognosis [20]. There seemed an overt distribution of DNA methylation signature in SPRED1 promoter region between the presence and absence of mutations in CEBPA genes in this study. Figueroa et al.found that AML with CEBPA mutation (mostly biallelic) can be divided into two distinct subtypes with different methylation signatures, hypermethylation or hypomethylation. The clinical outcome of subtype in marked hypermethylation status was even better than the known favorable risk core-binding factor leukemias, i.e., t(18;21) and inv(16). Therefore, whether hypermethylation of SPRED1 in subtype of AML with CEBPA mutation can be assigned to a risk stratified system and provide a specific therapy target for hypomethylating agents were worth further investigating.

Further studies with a larger number of samples are warranted to confirm the finding that aberrant methylation of SPRED1 contributes to the development of AML. Likewise, the prognostic correlation between the methylation status of SPRED1 and the treatment response should be confirmed by large-scale studies in the future. A detailed understanding of how SPRED1 hypermethylation is relevant to the pathogenesis of AML is required for better risk classification and better approaches to therapy.

The present study examined the methylation status of SPRED1 and found significant changes in the methylation levels in the SPRED1 gene promoter region. Also, the aberrant methylation status of SPRED1 was negatively correlated with its corresponding mRNA expression, indicating that the DNA methylation changes in SPRED1 gene contributed to transcriptional regulation in patients with AML and were vital in the pathogenesis of AML. Mutations of epigenetic regulators might be involved in the aberrant hypermethylation of SPRED1.These findings might provide important clues for the development of novel treatments for AML and provide a more thorough understanding of the etiology of leukemia.

This work was supported by the National Natural Science Fundation of China (grant number 81600117).