Methods: Data of 107 patients who received laparoscopic inguinal hernia repair and evaluation by preoperative ultrasonography at Dongguk University Ilsan Hospital from 2011 to 2015 were analyzed.

Some surgeons have performed bilateral herniotomy in patients with high risk of bilateral inguinal hernia. However, there might be complications such as testicular atrophy and infertility [8-11]. Prophylactic surgery of PPV is also controversial because the lesion is not a true hernia [12].

It is currently unclear whether PPV will develop to true hernia. It is difficult to determine the accuracy of sonography for diagnosing PPV using metachronous hernia recurrence. Recent advances in laparoscopic inguinal hernia surgery have led to a reduction in incidence of metachronous hernia by suturing contralateral PPV [13-15].

From 2011 to 2015, 211 patients who underwent surgery for pediatric inguinal hernia at Dongguk University Ilsan Hospital were enrolled. Of these 211 patients, 96 who did not undergo ultrasonography, 4 who had been previously operated for contralateral hernia, and 4 who had bilateral inguinal hernia were excluded. Finally, data of 107 patients who underwent ultrasonography for the uninvolved site were retrospectively analyzed.

Ultrasonography was performed by one professor specialized in urogenital radiology using a 10 MHz detector. Negative ultrasonography finding was considered as normal inguinal finding. Positive finding was defined as abnormal shading. The size of the internal inguinal ring was not checked.

Patients underwent surgery with pelvis slightly elevated in supine position. A 5 mm, 30° angled laparoscope was inserted above or through the umbilicus. We maintained an 8mmHg pressure for pneumoperitoneum, confirmed unilateral hernia, and evaluated contralateral side processus vaginalis opening. Two 2.7 mm laparoscopic needle holders were inserted into both abdominal sides at the level of umbilicus. The internal opening of inguinal hernia was then ligated using a purse string suture method. In the case of the opposite-side PPV, it was sutured using the same method (Fig. 1, Fig. 2). Contralateral PPV repair indication was: depth of PPV > 1 cm, no relation with diameter of PPV or shape. 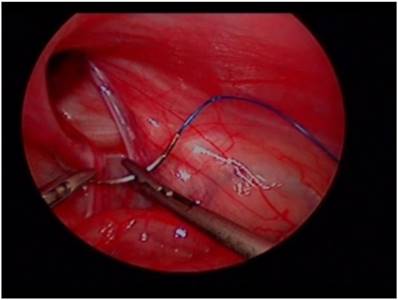 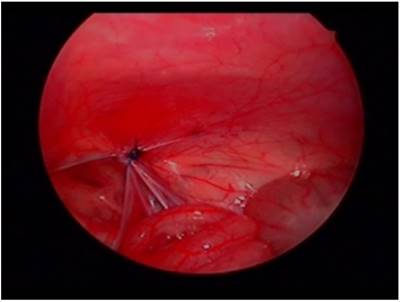 Postoperative complications occurred in 3 patients. Two cases of hydrocele developed at 1 week postoperatively and resolved in 3 months. One wound infection occurred 1 week after surgery. It was improved after 1 week. The mean follow-up period was 57.6 months for 63 unilateral hernia repair patients and 56.0 months for 44 patients who underwent bilateral repair due to positive PPV. There was no recurrence or metachronous hernia of the inguinal hernia during the follow-up period in unilateral inguinal hernia patients (Table 3).

Inguinal hernia has a higher incidence of metachronous hernia in pediatric patients than that in adults. The incidence of contra-lateral inguinal hernia in children is reported to be 3.0~14.7% [1, 2]. There is no conclusion as to which PPV may develop to be clinical hernia. However, a PPV is accepted as a cause of metachronous hernia. Recently, laparoscopic surgery has been popularized in pediatric patients because it is easy to observe the contralateral internal ring during laparoscopy. It is particularly advantageous when simultaneous repair of the opened PPV is needed [14, 15]. Time for bilateral hernia surgery does not show much difference from time for unilateral surgery. Becmeur et al. [16] have reported that a surgeon who is familiar with laparoscopic surgery can overcome 20 scheduled road learning curve. Since 1955, Rothenberg et al. [3-7] have conducted various studies on the contralateral inguinal area with examination, herniography, and laparoscopic examination through hernia sac. Klin et al. [18] have reported that laparoscopic examination of the hernia sac is simple and accurate. It can reduce contralateral side negative herniotomy. Antonoff et al. [19] reported that the rate of laparoscopic examination of the hernia sac for pediatric surgeons was 2% in 1996, 24% in 2002, and 37% in 2005. 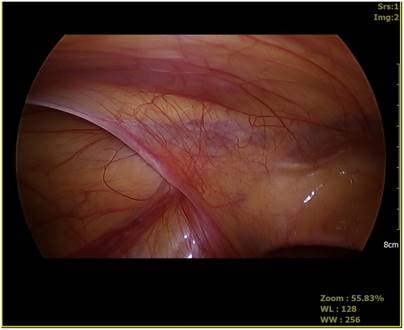 The most popular method for preventing metachronous inguinal hernia is ultrasonography before herniotomy. Laparoscopic examination through the umbilicus is the most accurate method for observation of contralateral PPV. Thus, we sought to evaluate the accuracy of ultrasonography by comparing results between laparoscopic examination and sonographic finding. The low accuracy rate of sonography (64.5%) suggests that sonography has limited ability to reduce incidence of metachronous inguinal hernia. 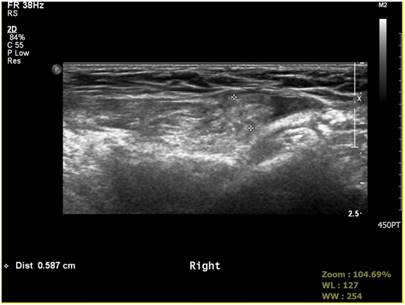 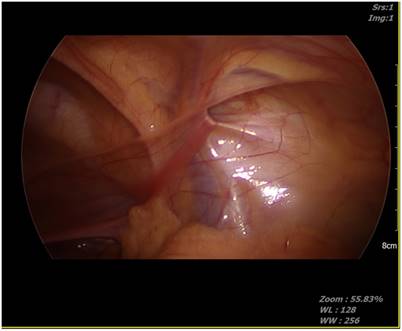 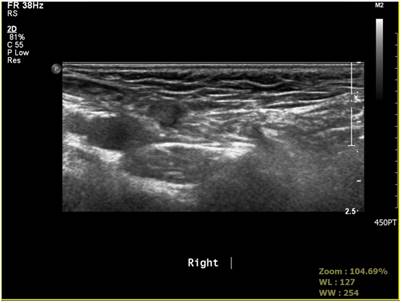 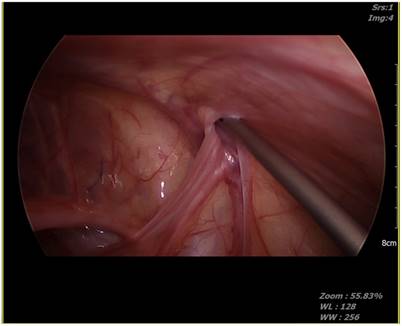 18. Klin B, Efrati Y, Abu-Kishk I, Stolero S, Lotan G. The contribution of intraoperative transinguinal laparoscopic examination of the contralateral side to the repair of inguinal hernias in children. World J Pediatr. 2010;6:119-24