Materials and methods: A total of 127 overweight/obese with NAFLD, were parallelly assessed by Magnetic Resonance Imaging (MRI), ultrasonography, transient elastography and a validated metabolomic designed test to diagnose NAFLD in this cross-sectional study. Body composition (DXA), hepatic related biochemical measurements as well as the Fatty Liver Index (FLI) were evaluated. This study was registered as FLiO: Fatty Liver in Obesity study; NCT03183193.

Results: The subjects with more severe liver disease were found to have worse metabolic parameters. Positive associations between MRI with inflammatory and insulin biomarkers were found. A linear regression model including ALT, RBP4 and HOMA-IR was able to explain 40.9% of the variability in fat content by MRI. In ROC analyses a combination panel formed of ALT, HOMA-IR and RBP4 followed by ultrasonography, ALT and metabolomic test showed the major predictive ability (77.3%, 74.6%, 74.3% and 71.1%, respectively) for liver fat content.

Conclusions: A panel combination including routine blood markers linked to insulin resistance showed highest associations with MRI considered as a gold standard for determining liver fat content. This combination of tests can facilitate the diagnosis of early stages of non-alcoholic liver disease thereby avoiding other invasive and expensive methods.

Non-alcoholic fatty liver disease (NAFLD) encompasses a spectrum of clinical conditions with hepatic fat accumulation, which can start from a simple steatosis to non-alcoholic steatohepatitis (NASH) and finally advanced fibrosis leading to cirrhosis or to hepatocellular carcinoma (1). Steatosis without inflammation represents about 80-90% of cases (2). Around 15-20% of people with NASH will have liver cirrhosis in 10-20 years (3). The inconsistencies between the great prevalence of NAFLD in the general adult population and the low awareness of determinative clinical symptoms and the lack of appropriate diagnosis tools needs to be investigated for improved and more precise clinical practice (4). In any case, NAFLD cannot be considered as a benign disease, because the progression of NAFLD could drive to a fatal stages and conditions in the liver, including hepatocellular carcinoma (5). Currently, there is no a simple generally accepted medical treatment for NAFLD, weight loss induced by hypocaloric diets, bariatric surgery or drug inducing fat mal-absorption, could ameliorate the NAFLD manifestations in some cases (6). Accordingly, NAFLD is associated with key metabolic syndrome components such as obesity, insulin resistance, hypertension and hypertriglyceridemia, but the mechanisms concerning this disease pathogenesis and progression remain unclear (7). The gold standard test for the diagnosis of NAFLD is liver biopsy, but it is rarely performed because is an invasive and expensive procedure and which is not devoid of some degree of error (8). Non-invasive liver biomarkers and routine laboratory tests such as alanine aminotransferase (ALT), aspartate aminotransferase (AST) and gamma-glutamyl-transpeptidase (GGT) are included in the general examination in subjects with suspected NAFLD (9), but they are often imprecise or unspecific. Therefore, newer investigations are focusing on more efficient predictive factors, including imaging techniques, algorithms, metabolomics measurements and plasma biomarkers to non-invasively identifications of NAFLD features at early stages (10). Therefore, it is important to seek alternatives to detect NAFLD. Thus, the objective of this research was to evaluate the fatty liver status by several validated approaches and to compare imaging techniques, lipidomic and routine plasma markers with magnetic resonance imaging in adults' subjects with non-alcoholic fatty liver disease.

The current study included 127 overweight/obese subjects with ultrasound-confirmed liver steatosis. The analyses were conducted within the FLiO project (Fatty Liver in Obesity), a randomized controlled trial (www.clinicaltrials.gov; NCT03183193), which was conducted following the Consort 2010 guidelines. The study was approved by the Ethics Committee of the University of Navarra (54/2015). All participants gave written informed consent for their participation in accordance with the Declaration of Helsinki. The study considered 127 men and women, between 40-80 years of age, with overweight or obesity (calculated as a BMI ≥ 27.5 and < 40 kg / m2) as described elsewhere (11) and with NAFLD (diagnosed by Radiology or Hepatology professionals using conventional ultrasonography / elastography for the assessment). The exclusion criteria were endocrine disorders, hyper or uncontrolled hypothyroidism, known liver disease (other than NAFLD), alcohol abuse (> 21 and> 14 units of alcohol per week in men and women respectively (ex 1 unit = 125 mL of wine), pharmacological treatments (immunosuppressants, cytotoxic agents, systemic corticosteroids or other drugs potentially causing steatosis hepatic or alteration of liver tests), presence of active autoimmune diseases or requiring pharmacological treatment, acute infections, a weight loss ≥3 kg in the last 3 months, serious psychiatric disorders as well lack of autonomy, or inability to follow the diet.

Anthropometric measurements such us body weight and waist circumference (WC), were determined in fasting conditions following previously described standardized procedures (12). Body composition was assessed by dual-energy x-ray absorptiometry (Lunar Prodigy, software version 6.0, Madison, WI) at baseline in accordance with validated protocols (13). Body mass Index (BMI) was calculated as body weight divided by height squared (kg/m2) following accepted cut-off criteria (11). Glucose, total cholesterol (TC), triglycerides (TG), ALT, AST, C-reactive protein (CRP) and GGT were measured with routine validated procedures in the laboratory of biochemistry in the Clinic Universidad de Navarra. Plasma concentrations of Fibroblast growth factor 21 (FGF-21) and Retinol binding protein 4 (RBP-4) were assessed by an ELISA assay with the same autoanalyzer system (Triturus, Grifols SA, Barcelona, Spain) in accordance with the manufacturer's instructions. The Fatty Liver Index (FLI) is an algorithm derived from serum TG, BMI, WC and GGT levels (14-17), which has been validated in a large group of subjects with or without liver disease and has an accuracy of 0.84 (95% CI) in detecting fatty liver. An index of <30 points indicates the absence of fatty liver and an index ≥60 rules is a marker of in fatty liver. Finally, Triglycerides/glucose index (TyG) was computed for each participant as the natural logarithm (Ln) of [fasting triglycerides (mg/dl) * Fasting plasma glucose (mg/dl)/2] (18).

The metabolomic used test, OWLiver (One Way Liver S. L. Bilbao, Spain) is a fasting blood probe that measures a panel of biomarkers that belong to the family of triacylglycerols (TGs), which are a reflection of the amount of fat and inflammation of the liver (19) and, therefore a measure of the degree of development of the NAFLD. All TGs are measured by high performance liquid chromatography and mass spectrometry (UHPLC-MS) as described elsewhere (19). The relative metabolite concentrations are analyzed together in an algorithm that generates the final OWLiver score, this being the probability of approximation of the state of the individual's liver to a normal liver, steatotic or with NASH. The test is based on the results expressed on a scale of values / probabilities from 0 to 1, which discriminates between non-fatty and fatty liver. The outcomes have a value of 0.5 as the cut-off point or separation to discriminate between their respective two stages. The test score was developed to estimate the NAFLD stage and is based on a prospective study, where subjects had previously been diagnosed by liver biopsy (19).

The ultrasonography methodology consisted in the evaluation of the steatosis status by visual quality of the liver echogenicity, measurements of the difference between the kidneys and the liver in the amplitude of the echo, determination of the clarity of the structures of the blood vessels in the liver (20). The clinical classification was done using a 4-point scale: less than 5% (grade 0), 5-33% (grade 1), 33-66% (grade 2), and greater than 66% (grade 3) as described elsewhere (20, 21). Transient elastography, with the subject in the supine position and the right arm in maximum abduction was also assessed (22). At this point, depending on the obesity status, M and XL probes were selected under the professional criteria. After finding and adequate window for exploring, repeated shots were performed until obtaining 10 valid values. The study was considered unsuccessful if no valid measurement was obtained in any of the 20 shots, while it was considered reliable if: a) 10 valid measurements were obtained; b) the proportion of valid measurements was at least 60%, and c) the interquartile range (IQR [interquartile range], which reflects the variability of the measurements) was less than 30% of the median value of liver stiffness obtained (LSM) [liver stiffness measurement]) (IQR / LSM <0.3) (23). If the study was considered valid, it was agreed that there was significant hepatic fibrosis if the measured median stiffness was greater than 7 kPa and cirrhosis 12 kPa (24). Magnetic Resonance Imaging (MRI) was used to detect and quantify lipids following the accepted criteria (22). The methodological concept is based on the inherent frequency difference between water and the dominant methylene resonance in lipid, leading in an observable chemical change echo-times (TE) in eco-gradient (GRE) images. Ignoring other underlying magnetic resonance and other biological effects, the degree of signal loss in phase images opposite to the proportion of a degree of particle accumulation, resulting in a method to detect fat liver (25). Those subjects with <5% were considered with NAFLD through this MRI technique (26). The echograph used was Siemens ACUSON S2000 y S3000. Transition elastography were performed through FibroScan® (Echosens, Paris, France) and finally, MRI was Siemens Aera 1,5 T. All the imaging tests were performed and evaluated by the same hepatologist within the medical team. Finally, cut off points of the different imaging techniques and transaminases levels were: Ultrasonography (grade 1/grade 2 and 3) (20); FibroScan (7 Kpa) (16), MRI (5%) (27) and OWLiver metabolic test (0.5) (28). Cur-off points for transaminases levels were 41 U/L for men and 33 U/L for women, and AST were 37 U/L for men and 31 U/L for women according with the normalized values of the laboratory procedures of Clínica Universidad de Navarra.

Normality distributions of the measured variables were determined according to the Shapiro-Wilk test. The relationships between MRI and anthropometric, biochemical and liver factors were assessed by ANOVA test. All comparisons were corrected by Bonferroni´s method. Spearman and Pearson were evaluated in the association between MRI with inflammatory and metabolic status as appropriate. Linear regression analyses were carried out taking the percentage of liver fat (MRI) as the dependent variable. Receiver Operating Characteristic (ROC) curves were applied to calculate the power of prediction of some variables for liver fat content (NAFLD) and the combination panel was created to calculate the power of prediction including homeostatic model assessment of insulin resistance (HOMA-IR), ALT and RBP-4 variables. Analyses were performed using STATA version 12.0 (Stata Corp). All p values presented are two-tailed, and differences were considered statistically significant at p<0.05.

Main characteristics of the participants.

Description of the main clinical characteristics of participants according to different imaging techniques.

Description of the main clinical characteristics of participants according to metabolomic test and transaminases to diagnose different liver status. 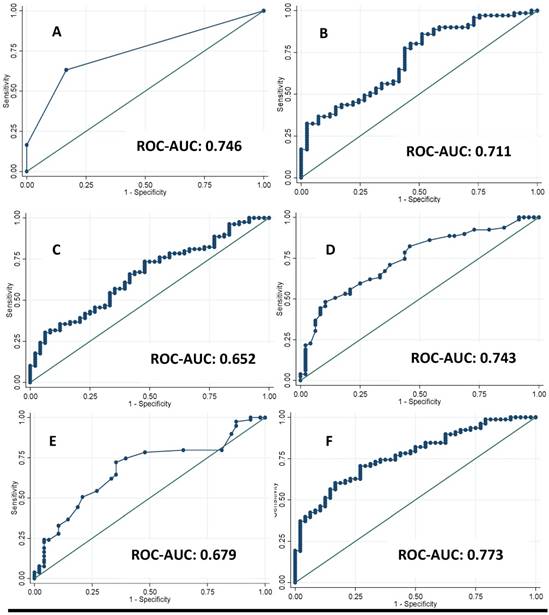 The steatosis gradation (ultrasonography) and a metabolomic test as well as the panel combination including routine plasma markers linked to insulin resistance showed the highest associations with magnetic resonance imaging considered as a gold standard for liver fat content. These results can help to facilitate the diagnosis thereby avoiding other invasive and expensive methods and provide guidance in the management of non-alcoholic liver disease in the early stages.

The authors are very grateful to all the participants of the study; the FLiO personnel for their assistance. We want to thank to the Health Department of the Government of Navarra (61/2015), CIBERobn (Physiopathology of Obesity and Nutrition) and to Fundació La Marató de TV3 (201630.10) for their financial support.

Health Department of the Government of Navarra (61/2015), CIBERobn (Physiopathology of Obesity and Nutrition) and to Fundació La Marató de TV3 (201630.10).

MAZ, JAM and JAT were responsible for the global design and coordination of the project, and financial management. IC, IA, ME, BAM, JIH, JIM, AB, JQ, AM, MPH, JIU, JAT, JK, JAM and MAZ conceived, designed, and wrote the article. All the authors actively participated in the manuscript preparation, as well as read and approved the final manuscript.

11. Salas-Salvado J, Rubio MA, Barbany M, Moreno B. [SEEDO 2007 Consensus for the evaluation of overweight and obesity and the establishment of therapeutic intervention criteria]. Med Clin. 2007;128(5):184-96

13. Zulet MA, Bondia-Pons I, Abete I, de la Iglesia R, Lopez-Legarrea P, Forga L. et al. The reduction of the metabolyc syndrome in Navarra-Spain (RESMENA-S) study: a multidisciplinary strategy based on chrononutrition and nutritional education, together with dietetic and psychological control. Nutr Hosp. 2011;26(1):16-26