Conclusions: PD-L1 tends to be overexpressed at the early stage of tongue SCC, showing a close correlation with initial development of tongue. However, PD-L1 expression may not affect prognosis.

PD-L1 is a protein expressed on the surface of cancer cells that suppresses the activity of T-cells by binding to PD-1 possessed by T-cells. The subsequent suppression of immune function by PD-L1 binding would lead to promotion of tumour growth and metastasis. Treatment using anti-PD-L1 antibody results in inhibited binding of PD-L1/PD-1 and prevents immune evasion, allowing the immune system to attack cancer cells.[1-3] In 2014, the cancer immunotherapy drug Opdivo (nivolumab), a PD-L1 inhibitor, was approved for the first time in Japan for malignant melanoma and non-small cell lung cancer. However, some reports showed that cancers expressing PD-L1 had a poorer prognosis than cancers without PD-L1 expression,[4-7] while other reports showed opposite results.[8-11] The precise mechanism of immune evasion of cancer by PD-L1/PD-1 binding remains to be clarified.

Immunohistochemistry is commonly used to investigate PD-L1 expression to select cases that are appropriate for immunotherapy using nivolumab, when the anti-PD-1 antibody of 28-8 pharmDx (Dako) is recommended. Adaptation of Keytruda is evaluated immunohistochemically using the antibody 22C3 pharmDx (Dako) as a companion diagnostic agent, and the evaluation criteria are based on TPS (Tumour Proportion Score). For non-small cell lung cancer, the indication of primary treatment is TPS > 50%, and that of secondary treatment is TPS > 1%.

Therapy using anti-PD-1 or anti-PD-L1 antibody is being actively carried out in various cancers, including oral cancer. In 2017, nivolumab was approved for head and neck cancer cases with recurence or distant metastases. A correlation between the prognosis of oral cancer and PD-L1 expression has been reported.[12, 13] However, no report has confirmed the association of PD-L1 expression with clinicopathological factors, and whether PD-L1 expression is correlated with the biological behaviour or prognosis in oral cancer is unclear.

Based on these findings, here we investigated PD-L1 expression in squamous cell carcinoma (SCC) of the tongue and examined potential correlations with clinicopathological factors.

One hundred thirty-five cases with tongue SCC that were surgically resected at Saitama Medical University International Medical Center from January 2007 to September 2016 were recruited. No neoadjuvant chemotherapy was performed in the included cases. The study was approved by the institutional review board following the ethical standards of the responsible committee on human experimentation and of the Helsinki Declaration of 1975 as revised in 1983. The clinicopathological stage was determined according to the UICC 7th edition.

Tissue microarray (TMA) cores of cylindrical shape with a diameter of 3 mm were prepared from routinely processed paraffin-embedded tissue blocks of surgically resected materials. Twenty-two cases had only a superficial core and 113 cases had both superficial and deep cores. These cores were aligned and re-embedded to produce the new blocks. The samples were run through the automated system by Dako Autostainer Link 48 (Agilent Technologies, CA, USA) according to the manufacturer's protocol. We performed staining using the PD-L1 primary antibody 28-8 (dilution 1:400, Abcam). Expression of PD-L1 was evaluated semi-quantitatively according to the degree of positive staining. PD-L1 was considered positive when 28-8 positive tumour cells accounted for 50-100% of all tumour cells. When 28-8 positive tumour cells accounted for 0-49%, PD-L1 was considered negative. [14-16]

In addition, only when the tumour cells were 28-8 positive was validated, and positive images of other cells such as histiocytes were ineffective. When the expression of PD-L1 was observed on the cell membrane, it was regarded as an effective functional image. In other words, it was ineffective when the cell membrane was 28-8 negative and cytoplasm was positive. Representative PD-L1 positive samples and negative samples are shown in Figure 1. We also performed a preliminary study using two other PD-L1 antibodies (SP142 and E1J2J) and compared results with staining with the PD-L1 28-8 antibody to determine the cutoff line for positivity or negativity.

Comparison between TMA and whole sections

PD-L1 expression was evaluated in whole sections from 23 cases that were randomly selected, irrespective of clinicopathological findings, to ascertain the potential consistency or discrepancy between TMA and whole section staining.

The correlation between PD-L1 expression and clinicopathological variables was statistically analysed using IBM SPSS Statistics 24, and a p-value less than .05 was regarded as significant. 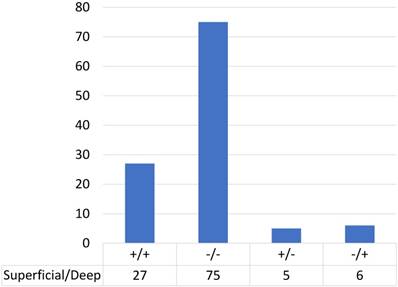 Comparison of PD-L1 expression in 23 cases that were randomly selected, irrespective of clinicopathological findings, to examine the consistency of PD-L1 staining between TMA and whole section staining. 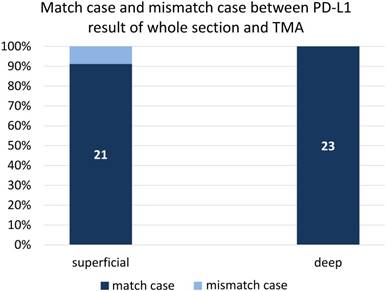 Correlation of PD-L1 with clinicopathological findings

Survival analysis based on PD-L1 expression

We performed Kaplan Myer curve to examine the potential correlation between PD-L1 expression and survival rate, but no correlation was found (Figure 6).

*Evaluation of PD-L1 of pN: deep core was used in case of depth≥3 mm

Recently, immunotherapy that targets the PD-L1/PD-1 pathway is being applied to various cancers that are recurrent or resistant to typical chemotherapy.[17, 18] However, whether PD-L1 expression is related to clinical outcome has not been clear.[19] Some reports mention a positive correlation between prognosis and immunohistochemical PD-L1 expression,[8-11] while others report a negative correlation.[4-7] In head and neck cancer, especially SCC, similar conflicting findings have been published.[12, 13] PD-L1-targeted immunotherapy has also been applied to recurrent or refractory head and neck cancer, although the overall survival of head and neck cancer patients is favourable, in part due to a preventive cervical dissection.[20]

Immunohistochemical staining for routine practice or a cohort study is usually used as a surrogate procedure, but some challenges remain in these procedures, such as differences in staining depending on the antibody used [21] and staining heterogeneity even in the same section. Immunohistochemistry using TMA is a helpful strategy to address many cases at once and to determine the correlation between PD-L1 expression and the clinical outcome.[22] In this study, we attempted to examine the PD-L1 expression using three anti-PD-L1 antibodies (data not shown), but the results showed no significant differences and thus we chose to present the data analysed using the 28-8 antibody as a representative antibody. The heterogeneity of PD-L1 expression is challenge during immunohistochemical evaluation, in particular when using TMA instead of a representative whole section.[23, 24] Here we examined 23 randomly selected cases to compare staining approaches. There was a minor difference (coincidence rate 90%) in the PD-L1 staining results between the superficial part of the TMA and the whole section, and PD-L1 staining in the deep part of the TMA was consistent with the whole section. These results suggest that even the examination of PD-L1 expression based on biopsy specimens, which are usually obtained from the superficial part of tumour, may be the same as the surgically resected whole tumour.

In the analysis of correlation between PD-L1 expression and variable clinicopathological factors, PD-L1 expression was found to show a positive correlation between pT1 and pT2 but a negative correlation among pT2, pT3 and pT4. In the UICC 7th edition, the pT classification is mainly based on tumour volume. The pT1 cases were predominantly under 2,000 mm3, the pT2 cases were under 20,000 mm3, and pT3 cases were under 40,000 mm3. However, there was a considerable variability in the tumour volume in pT4 cases. As a result, as the tumour volume increased from 2,000 to 5,000 mm3, the PD-L1 positive rate increased with the highest rate in pT2 cases, but decreased from pT2 to pT4. This suggests that PD-L1 tends to be most strongly expressed at an early stage in tongue SCC, which may be linked to the theory that PD-L1 is essential for local growth as a relatively small size. This suggests that PD-L1 is not expressed continuously during the overall progression of tongue SCC. In colon cancer, there is also a report that the expression of PD-L1 decreases as the pT classification increases in this way. [25]

In this study, LNM-positive cases tended to show higher PD-L1 expression rates compared to negative cases. The presence or absence of lymph node metastasis is generally thought to be correlated with prognosis, but in this study no significant correlation was observed between PD-L1 expression and overall survival time and progression-free survival.

The results of the multiple logistic regression analysis by the variable increase method based on the likelihood ratio are as shown in the table. The model chi-square test result was significant at p <0.05. The result of Hosmer and Lemeshow Test was p = 1.000, and the discriminant predictive value was 73.3%. 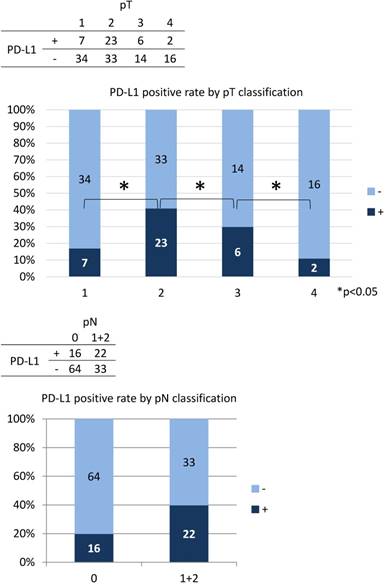 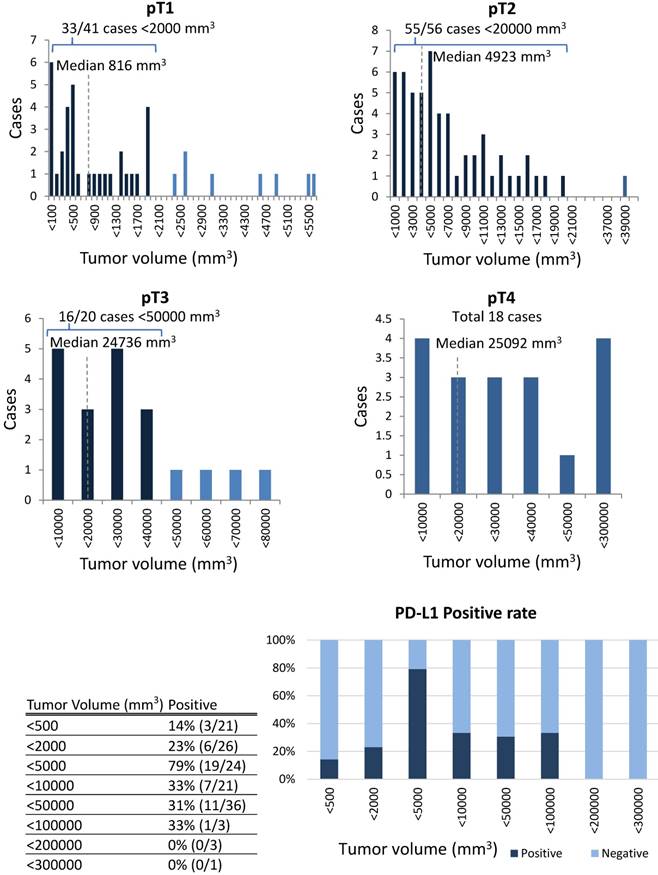 Expression of PD-L1, lymph node metastasis, and prognosis are not simply linked, but mechanisms need to be examined more carefully. Some part of the advanced tongue SCC tumour may be effectively targeted by immunotherapy targeting PD-L1/PD-1. But, as for the therapy, in the determination of its introduction and prediction of its effect, the usefulness of immunohistochemical evaluation of PD-L1 remains to be clarified. Not limited to immunohistochemical application of only PD-L1, some co-factor of PD-1 may be needed to be investigated to raise the reliability of PD-L1.[26] Further analysis of RNA expression in association with the immunohistochemical expression is now ongoing.[27] Future studies should also analyse PD-L1-related T-cells in future studies.[28, 29]

Overall survival of tongue SCC cases according to PD-L1 expression by Kaplan-Meier analysis. 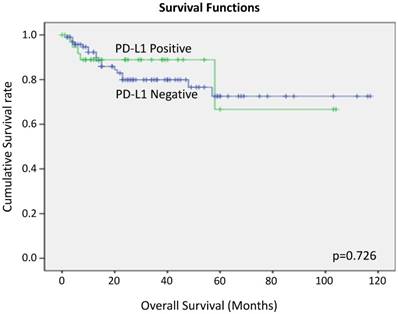 PD-L1 expression in tongue SCC may be of significance as an early event of tumour growth, and therefore immunotherapy targeting PD-L1/PD-1 may be effective for the early stage tumour, rather than for advanced or recurrent cases. This observation may help generate a new therapeutic strategy for tongue SCC patients.

We thank Edanz Group (www.edanzediting.com/ac) for editing a draft of this manuscript.