Aim: Long non-coding RNAs (LncRNAs) have been identified to play a crucial role in tumorigenesis and the progression of many types of tumors. However, the clinical significance and biological function of lncRNA nuclear-enriched abundant transcript 1(NEAT1) in human osteosarcoma remains unknown. Here, we investigated the role of NEAT1 in human osteosarcoma cell lines and clinical tumor samples.

Methods: In this study, expression of NEAT1 was analyzed in 19 osteosarcoma tissues and paired adjacent non-tumor tissues by using quantitative real-time PCR. Additionally, knockdown of NEAT1 expression using Lentivirus-mediated siRNA was performed in order to explore the biological function of NEAT1 on osteosarcoma cell proliferation and metastasis through MTT, colony formation assay and transwell assay.

Conclusion: LncRNA NEAT1 was up-regulated in osteosarcoma tissue, promoting proliferation and metastasis of osteosarcoma cells. These findings indicate the role of this substance, as a growth regulator in osteosarcoma, and thus it may serve as a novel biomarker, and drug target for developing osteosarcoma therapies.

Osteosarcoma is the most common malignant bone tumor of mesenchymal origin, usually occurring in children and adolescents with early occurrence commonly leading to pulmonary metastasis and a poor prognosis overall [1]. Combination of limb salvage and neoadjuvant chemotherapy as a treatment strategy for this condition has increased five-year disease-free survival rates to 70% [2-4]. Unfortunately, the toxic effects of chemotherapy, resistance to treatment, and the spread of metastasis remain some of the main obstacles to treatment of the disease. Therefore, it is necessary to explore the potential molecular mechanisms of this condition to discover novel biomarkers which may lead to the development of diagnosis and treatment of osteosarcoma.

LncRNAs are more than 200 nucleotides in length, containing non-protein-coding capacity transcripts. Recent studies have demonstrated that lncRNAs are emerging as new regulators within cellular processes such as cell proliferation, differentiation, apoptosis, and disease pathogenesis. Further evidence has shown that aberrantly expressed lncRNAs are associated with tumorigenesis in numerous types of cancers such as gastric cancer, cervical cancer [5], lung cancer and hepatocellular carcinoma [6], suggesting that they may perform an important regulatory function in tumorigenesis and cancer progression.

LncRNA nuclear-enriched abundant transcript 1 (NEAT1), which has two isoforms, 3.7 kb NEAT1_1 and 23 kb NEAT1_2, identified from the multiple endocrine neoplasia located at chromosome 11q13.1 [7], is an crucial element of nuclear paraspeckles [8]. Some studies have showed that aberrant expression of NEAT1 is correlated to a range of cancers diagnoses. For example, Fu et al. found that lncRNA NEAT1 was overexpressed in gastric cancer tissues and cell lines as well as clinical stage and distant metastases [9]. Li et al. also showed that NEAT1 was overexpressed in, and correlated with poor prognosis in, endometrial cancer. Further studies suggested that NEAT1 promoted cell proliferation, invasion, migration and inhibited cell apoptosis in endometrial cancer [10]. Additionally, Guo found lncRNA NEAT1 expression was increased in hepatocellular carcinoma tissues and related to tumor size and TNM stage [11]. These findings suggest that NEAT1 may participate in the progression of various human cancers. To date however, the emerging potential role and mechanism of NEAT1 in osteosarcoma is yet unclear.

Osteosarcoma tissues and their adjacent non-tumor tissues were obtained from 19 pathologically diagnosed osteosarcoma patients who underwent resection of osteosarcoma within the First Hospital of China Medical University, (Shenyang, China) between July 2010 and July 2014. None of these patients had received preoperative therapy before surgery. Patients at stage IIB/III were included, and patients with any other primary disease were excluded. All tissues were immediately stored at -80°C. Related clinical data was also retrieved from each patient's medical records. This study was approved by the ethics committee of First Hospital of China Medical University, and informed consent was obtained from all of the patients.

The human osteosarcoma cell line U-2 OS was purchased from Shanghai Gefan Biotechnology. All cell lines were cultured in RPMI-1640 (GIBCO) medium supplemented with 10% fetal bovine serum (VAN Biotech) at 37°C in CO2 (5%).

Cell viability was measured using an “MTT kit” (Keygen Biotech, Jiangsu China) according to the manufacturer's instruction. A total of 3,000 transfected cells/well were seeded in 96‑well plates and incubated at 37˚C in 5% CO2 for 1 day. Then, 50 ml MTT solution was added into the medium for 4 h incubation at 37˚C in 5% CO2, and then each well was replaced with 150 ml dimethylsulfoxide. Cell proliferation was then monitored at 24, 48, 72 and 96 h. The absorbance value (OD) of each well was then measured at 490 nm.

Transfected cells (0.5x103) were placed into each well of 6-well plates and cultured for two weeks, with nutrient media being replaced every 4 days. Colonies were then fixed with 10% formaldehyde for 20mins, followed by staining with 0.1% crystal violet in phosphate buffered saline (PBS) for 5 minutes. The total number of stained colonies was then counted.

Osteosarcoma cell lines were harvested and collected 48 h after transfection with si-NEAT1 or si-NC. In the migration assay, 1x105 cells were seeded on a fibronectin-coated polycarbonate membrane insert within a transwell apparatus (Corning). In the invasion assay, the upper chamber of the apparatus was pre-coated with 24mg/ml Matrigel (Corning), followed by 1x105 transfected cells being placed into the upper chamber. Inserts were then placed into the bottom chamber wells of the apparatus containing 1640-medium with 10% FBS. After the cells were incubated for 24 h, the cells remaining on the upper membrane were removed by scrubbing with a cotton swab. Giemsa-stained cells adhering to the lower surface were counted under a microscope in five predetermined fields.

All experiments were performed in triplicate. SPSS 19.0 software and GraphPad Prism 6 were used to analyze data for statistical significance. The two-tailed Student's t test was used for comparisons of two independent groups. A p value of less than 0.05 denoted significance.

Real-Time PCR was performed to detect the expression level of NEAT1 in 19 osteosarcoma tissues and their adjacent non-tumor tissues (ANCT). Results indicated that the lncRNA NEAT1 expression level was significantly increased compared to that in ANCT (p<0.05) (Figure 1).

Relative expression of lncRNA NEAT1 in osteosarcoma tissues in comparison with ANCT. LncRNA NEAT1 expression was examined by qRT-PCR and normalized to GAPDH expression. * p<0.05. 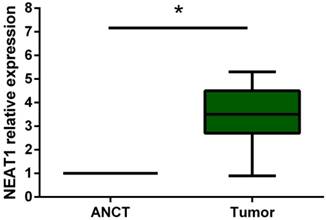 Silencing of lncRNA NEAT1 and inhibition of proliferation of osteosarcoma cells

To investigate the effect of NEAT1 silencing on osteosarcoma cell invasion and migration, transwell invasion and migration assays were performed. Results indicated that the migration ability of osteosarcoma cell U-2 OS transfected with si-NEAT1 (Figure 5B) was significantly reduced compared with si-NC group (Figure 5A). Similar results were also seen in invasion assays, with U-2OS cells transfected with si-NEAT1 (Figure 5D) exhibiting a lower ability than that those in the si-NC group (Figure 5C). These results suggest that NEAT1 has a role in the promotion of metastasis of osteosarcoma.

LncRNAs are more than 200 nucleotides in length, possessing a non-protein-coding capacity, and lacking an open reading frame [12]. In recent years, more and more evidence has suggested that long non-coding RNAs play important roles in gene imprinting, cell differentiation, immune response, the occurrence of human disease, tumors, and other biological functions [13-14]. Further work has also indicated that an absence of regulation of lncRNAs is involved in tumorigenesis and cancer progression [15]. For example, Qiu G et al showed that the lncRNA MATAL1 was overexpressed in colorectal carcinoma, with high levels of MATAL1 expression being associated with the TNM stage of the disease [16]. Moreover, research conducted by J Qiu et al suggested that the levels of expression of the lncRNA HOTRIL were significantly high within epithelial ovarian cancer tissues in comparison to normal ovarian tissues, with high expression of HOTAIR being closely associated with the occurrence, development, invasion, metastasis, and prognosis in epithelial ovarian cancer [17]. In addition, Matouk IJ et al suggested that the lncRNA HULC was upregulated in hepatocellular carcinoma and hepatic colorectal metastasis, indicating that HULC could likely to become a new marker of hepatic colorectal metastasis [18]. Several studies have also indicated that some transcription factors could be involved in the regulation of expression of lncRNAs, such as c-myc, which has been suggested to play a role in the transcription of HOTAIR, and further, that p53 could have a function in the regulation of PVT-1 expression [19-20]. All of the studies identified here suggest that aberrant expression of lncRNA is correlated with tumors progression, and thus, they can be used as prognostic indicators. However, the function of NEAT1 in osteosarcoma has, to this point, remained unknown. 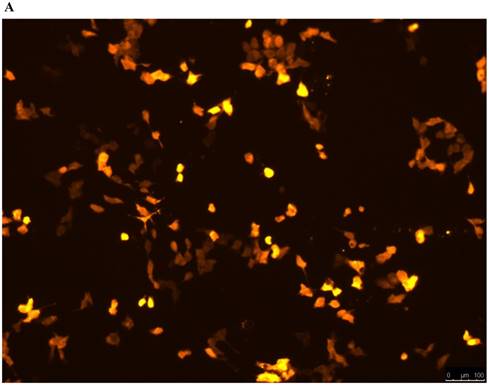 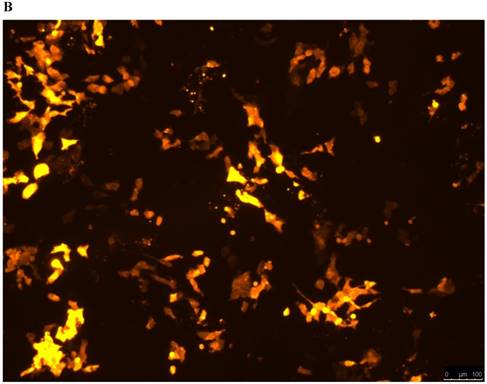 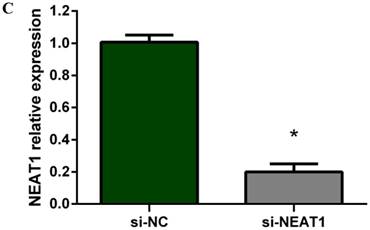 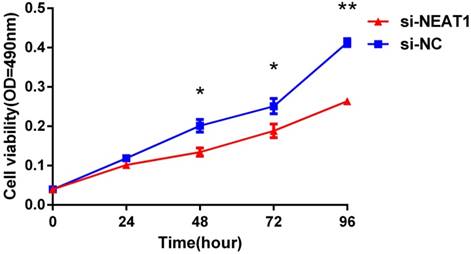 A, B, C: Downregulation of NEAT1 inhibited osteosarcoma cell U-2 OS proliferation. Colony formation assay was performed to detect the proliferation of transfected U-2OS cells. * p<0.05. 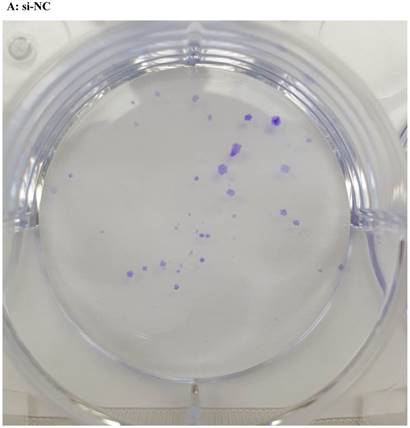 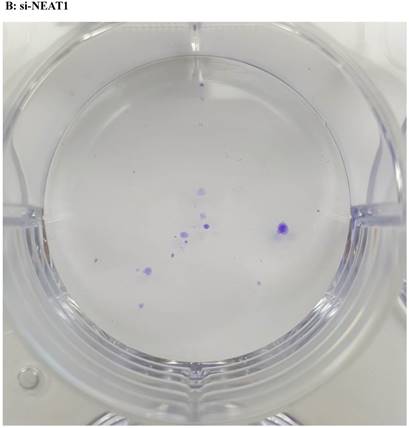 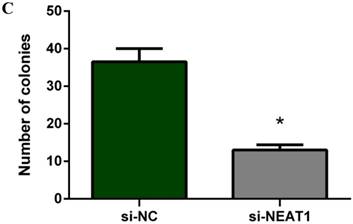 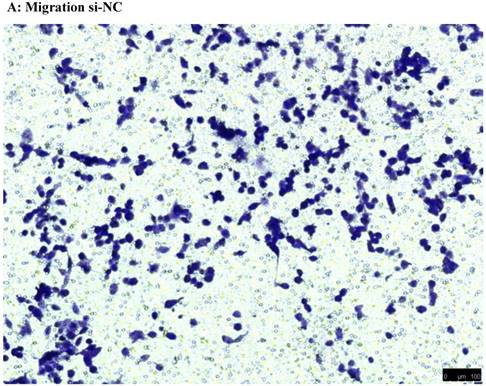 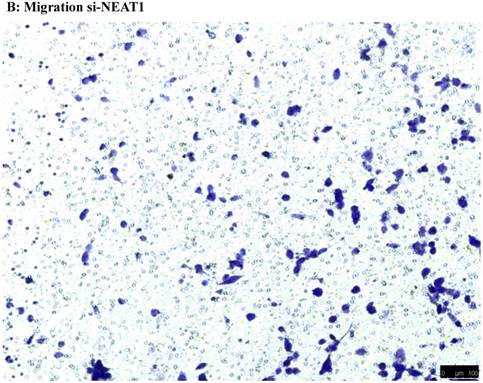 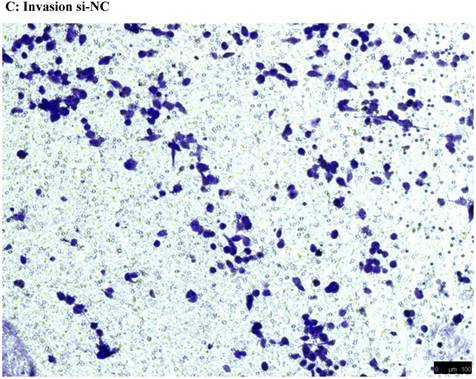 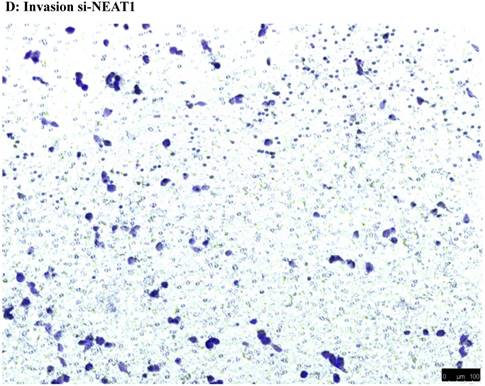 LncRNA NEAT1, locus on chromosome 11, is transcribed from the familial tumor syndrome. As a new class of sub-nuclear bodies, paraspeckles contain RNA-binding proteins in mammalian cells. Paraspeckles can regulate gene expression via maintaining mRNAs for rewriting in the nucleus. NEAT1 serves as a crucial component of paraspeckles [21-23]. Indeed, aberrant expression of NEAT1 has been reported play an important function within various human cancers [24]. With regards to existing literature, Chakravarty D et al found that NEAT1 was upregulated in prostate cancer; and further studies have shown that NEAT1 has induced oncogenic growth by altering the epigenetic landscape of target gene promoters to favour transcription [25]. An additional study postulated that the expression of NEAT1 is cooperatively controlled by HuR and miR-124-3p, and has responsibilities within the regulation of ovarian carcinogenesis [26]. In lung cancer, a strong correlation of high NEAT1 expression in tumors with poor survival was confirmed in NSCLC tissues, indicating that NEAT1 expression levels could be a helpful prognostic biomarker for high risk of NSCLC patients [27]. Unfortunately, the effects of NEAT1 in osteosarcoma were not tracked in the same study.

NEAT1 has two isoforms, 3.7 kb NEAT1_1 and 23 kb NEAT1_2. These two isoforms of NEAT1 share the same transcriptional start site and the same RNA polymerase II promoter. They just differ in the location of their 3' ends. The NEAT1_2 has a tRNA-like structure at its 3' end that is processed by RNaseP cleavage rather than a poly-A tail [28]. The primers for NEAT1 and shRNA we designed had included these two isoforms and mRNA measurements had covered both isoforms as well.

In this work, we have identified that the expression level of NEAT1 was frequently overexpressed within osteosarcoma tissues, compared with adjacent non-tumor tissues, suggesting that NEAT1 may also play a significant role in osteosarcoma development and progression. To further explore the underlying mechanism of lncRNA NEAT1 in osteosarcoma progression, we silenced NEAT1 expression in the osteosarcoma cell U-2 OS by way of Lentivirus-mediated RNA interference, followed by real-time PCR in order to detect the expression of NEAT1. We observed the fluorescence carefully under the inverted microscope and using RT-PCR to ensure the infection efficiency. MTT assays, colony formation assays and transwell assays were all employed to detect proliferation, migration and invasion capacity of osteosarcoma U-2 OS cells, with these assays indicating that silencing of NEAT1 significantly suppressed the proliferation, migration and invasion of osteosarcoma cells in vitro. These data further support the importance of NEAT1 in cellular biology and oncogenesis of osteosarcoma cells. However, further study is required in order to identify the exact pathway through which NEAT1 influences osteosarcoma and how this pathway works.

In summary, we have demonstrated that NEAT1 is commonly upregulated in human osteosarcoma, allowing this to be potentially harnessed as a prognostic factor for this condition and further, the silencing of NEAT1 may act as a potentially significant target for the inhibition of osteosarcoma cell proliferation and metastasis in vivo. These results underscore the importance of NEAT1 in osteosarcoma development.

This paper was supported by the natural science foundation of science and technology department of Liaoning province.