Paget´s disease of bone (PDB) is a metabolic focal disorder of bone remodelling characterized by an increase in bone resorption followed by an excessive compensatory bone formation. The main PDB alteration resides in osteoclasts that increase in size, number and activity. As a result, the bone structure is abnormal and variegated and causes alterations of its mechanical properties [1]. Over time, the hypercellularity, bone turnover and vascularization decrease, and predominates a sclerotic bone (inactive PDB) [1,2]. One of the most common and effective treatments for the symptoms in PDB patients is zoledronic acid, an aminobisphosphonate that inhibits osteoclast activity thereby reducing the rate of bone turnover and therefore reduces pain and improves quality of life of the patients [3,4] by inhibiting osteoclast proliferation [5] and inducing osteoclast apoptosis [6]. PDB is the second most frequent metabolic bone disorder after osteoporosis and affects up to 3% of caucasians over 55 years of age [7]. In Spain, prevalence is 0.7% to 1.3% with an irregular geographic distribution [8] and areas of high prevalence as Vitigudino-Salamanca (5,7%)[9].

RANK-RANKL-OPG pathway regulates bone remodelling. The first step of bone turnover is the resorption of bone by osteoclasts which activation and function is regulated by the binding of receptor activator of nuclear factor kappa B ligand (RANKL) to RANK receptor [10]. Osteoprotegerin (OPG), a decoy receptor produced by osteoblasts, neutralizes RANKL and has an inhibitory effect on osteoclast differentiation and bone resorption [11,12]. This step is followed by osteoblasts-mediated bone formation. Some osteoblasts are trapped within bone matrix and differentiate into osteocytes that act as mechanosensors releasing RANKL and sclerostin [13]. Sclerostin inhibits bone formation by modulation of OPG and RANKL levels [14]. Higher plasma levels of OPG and RANKL have been described in PDB patients [15], but there are no studies concerning changes in these proteins in the presence or absence of metabolically active PDB.

Pagetic bone is also characterized by a higher vascularization and marrow fibrosis. Angiogenesis is a tightly regulated process in which the actions of proangiogenic and antiangiogenic factors are counterbalanced. A fundamental mediator of angiogenesis is vascular endothelial growth factor (VEGF), which supports the growth of new blood vessels and promotes differentiation of hematopoietic cells and subsequently the presence of a greater number of bone-resorptive osteoclasts [16]. The placental growth factor (PGF) also stimulates angiogenesis, being also relevant in circumstances as ischemia, inflammation, wound healing and cancer [17,18]. Despite of PDB bone being a highly vascularized tissue, there are no studies on the plasma levels of angiogenic mediators in the different states of the disease; moreover, the effect of PDB treatment on plasma levels of these angiogenic mediators is unknown. On the other hand, recent studies show that endoglin (ENG), a non-signalling receptor of transforming growth factor-β1, is a better marker of vascularization [19-21] than VEGF and an indicator of vascular pathologies associated to diabetes and hypertension [22].

Thus, the purpose of this study was to analyse plasma levels of mediators (RANKL, OPG, sclerostin, ENG, VEGF, PGF, ENG) implicated in the increased bone turnover and hypervascularization observed in PDB and their evolution and response to zoledronic acid treatment in these patients.

The cohort study comprised 70 PDB naive to bisphosphonate treatment patients recruited in the Metabolic Bone Unit at the University Hospital of Salamanca (Spain) between January 2014 and February 2016. The experimental protocol was in accordance with the Declaration of Helsinki (2008) of the World Medical Association, approved by the University Hospital of Salamanca Ethics Committee and complied with Spanish data protection law (LO 15/1999) and specifications (RD 1720/2007). All who accepted to participate in the study signed a written consent. Clinical and analytical variables such as gender, age at diagnosis, family history of PDB, number of affected bones, Coutris ´s index, presence of complications (fractures and cranial nerve involvement) and alkaline phosphatase (ALP) levels were collected from each patient. Coutris' index is used to calculate the extent of the disease, expressed as the percentage of affected skeleton according to the coefficient that each bone represents in the skeleton set, and is calculated as the percentage of the skeleton affected and it responds to the following function: Patients ALP= (pagetic bone ALP × Coutris´s index/100) + (normal bone ALP × (100-Coutris's index)/100 [23,24]. ALP was adjusted according to the upper limit of ALP standard range following the function: ALP/upper ALP (adjusted ALP). PDB patients with elevated plasma ALP and normal levels of liver derived enzymes (gamma-glutamyltransferase, bilirubin, alanine transaminase and aspartate transaminase), were classified as having active PDB. Other causes of raised ALP, as intra- or extrahepatic cholestasis, were ruled out. None of the patients took medication that could affect calcium metabolism.

The study design included two subgroups of patients: normal ALP levels untreated patients (PDB patients in the inactive phase of the disease) and active treated patients (when increased levels of plasma ALP from bone origin were present, which corresponded to the active phase of the disease) who received one dose of 5 mg of intravenous zoledronic acid. Plasma samples from each PDB patient who did not receive zoledronic acid treatment were collected and stored at -80ºC at the time of consultation. In PDB patients treated with zoledronic acid, we obtained and stored three plasma samples: baseline, three months post-treatment and twelve months post-treatment.

Clinical characteristics of the recruited PBD patients are summarized in Table 1. 29 of the 70 PDB patients analysed (41.42%) had an active disease. After the analysis of plasma levels of ENG, OPG, VEGF, PGF, RANKL, sclerostin and ALP, we found that, as expected, circulating ALP concentration was significantly higher in active PDB than in inactive PDB patients (Table 2). However, we did not find significant differences in the plasma levels of the other proteins analysed.

Few studies have been addressed to evaluate angiogenic biomarkers after zoledronic acid treatment in PDB patients. Moreover, although normal ALP can be found in some monostotic active patients, most guidelines recommend the increased level of ALP with other liver derived enzymes in the normal range as a possible situation of enough active disease to order treatment [25]. To our knowledge, this is the first study in which plasma levels of these angiogenic factors were compared in treated active PDB subjects. Plasma levels of RANKL, sclerostin, ALP and PGF decreased 12 months after the treatment, but there were no differences in the levels of OPG, RANKL, sclerostin, ENG, PGF and VEGF between active and inactive PDB. We have considered active PDB patients when increased levels of plasma ALP from bone origin were present [26]. Although some monostotic active patients show normal ALP levels, we used ALP from bone origin as a threshold for treatment. Changes in plasma levels of other bone formation markers as PINP (amino-terminal propeptide of procollagen type 1) are not the rule to start treatment. Taking into account this consideration, we have assumed that an elevation in ALP from bone origin (when other liver derived enzymes are in normal range) means an active disease with increased bone formation. It has been previously reported that PDB patients have higher levels of RANKL and OPG than healthy subjects [15,27,28] but, in these studies, the active or inactive state of PDB was not considered. In fact, Martini et al. showed that PDB patients had higher levels of OPG and RANKL than healthy individuals[15], but the data shown in that study have a high variability that could be the result of mixing patients in both active and inactive states. Our results showed that patients with active PDB have slightly higher levels of RANKL and lower levels of OPG than patients with inactive PDB, and these results are in agreement with the higher bone turnover observed in the active PDB. However, these differences in OPG and RANKL were not statistically significant, due probably to the number of patients and the considerable standard deviation. 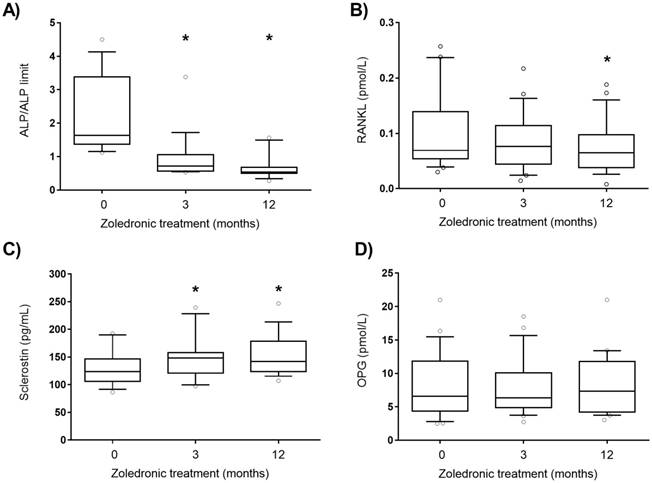 Sclerostin is another protein involved in the regulation of bone resorption and in the inhibition of bone formation. In a study with 88 PDB patients, sclerostin plasma levels were higher in PDB patients than in healthy subjects [14]. However, a recent study with 40 PDB patients showed no differences in sclerostin serum levels between PDB patients and healthy subjects of the same age [29]. In neither of these studies, these levels were compared between patients with active or inactive PDB. In our study, there were no differences in sclerostin plasma levels between active and inactive PDB patients, which seems to suggest that this protein is not involved in the active phase of the disease. 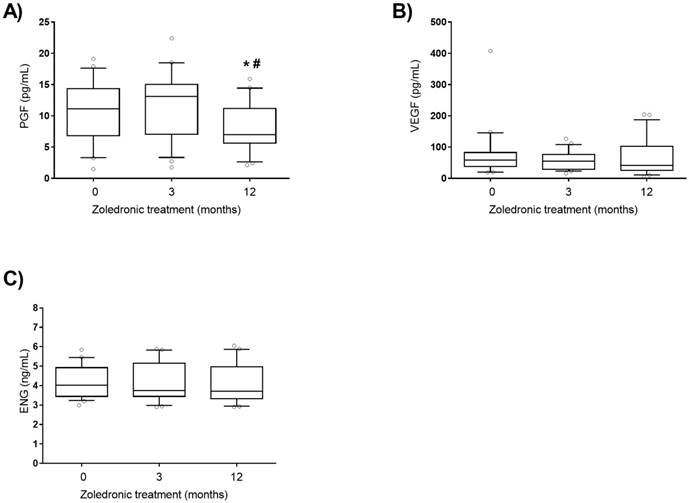 Another characteristic of the pagetic bone is its higher vascularization [1,2]. We analysed plasma levels of several angiogenesis mediators, VEGF, PGF and ENG [19-21]. We found no differences in the plasma levels of ENG, PGF and VEGF between active and inactive PDB. However, we observed that plasma levels of PGF decreased 12 months after zoledronic acid treatment in active PDB patients. PGF is a member of the vascular endothelial growth factor subfamily which binds with vascular endothelial growth factor receptor 1 (VEGFR1) and this interaction is involved in the pathological angiogenesis observed in various diseases such as ischemic cardiovascular disease, tumours, inflammatory diseases and diabetic retinopathy [18,37-39]. This is the first time that a decrease of PGF plasma concentration after zoledronic acid treatment in PDB is described, which suggests that zoledronic acid might reduce the pathological vascularisation characteristic of pagetic bone.

The main limitation of the study is that although the study is carried out in a Spanish area with a high prevalence of the disease, the sample size is not very high. Even so, the statistically significant differences found in our study are even more robust considering the number of patients recruited. On the other hand, although the age of patients is similar, activity and extension of disease is not homogeneous. These results are preliminary, and need to be replicated in another cohort of PDF patients.

23. Reiner JC, Bontoux-Carre E, Seret P, Villayleck S. [How to evaluate the activity of Paget's disease in clinical practice and which patients should be treated?]. Rev Rhum Mal Osteoartic. 1984Oct;51(9):463-8