Hepatitis A virus (HAV) infects humans through the fecal-oral route and causes self-limited acute hepatitis in most cases [1, 2]. The incidence of HAV infection is associated with socio-economic conditions such as sanitation, quality of water and income [1]. HAV infection causes acute hepatitis and occasionally causes acute liver failure and death in developing and developed countries [3-6]. In a recent outbreak of hepatitis A in California, U.S., over 10 people died [5, 6], even though effective vaccines for HAV have been developed [7, 8]. Therefore, effective antivirals and host-targeting drugs against HAV should be developed.

We previously observed that HAV replication was associated with a reduction in glucose-regulated protein 78 (GRP78) expression [9] and reported that GRP78 is an antiviral against HAV infection [10]. Miso is a traditional Japanese seasoning and is used for miso soup, a Japanese culinary staple. It has also been reported that Japanese miso extract increases GRP78 expression and suppresses ultraviolet C mutagenesis [11]. In the present study, we examined whether Japanese miso extracts could suppress HAV replication in human hepatocytes.

The human hepatoma cell line Huh7, which was kindly gifted from Prof. R. Bartenschlager [12], was maintained in Dulbecco's modified Eagle's medium (DMEM) (Sigma-Aldrich, St. Louis, MO, USA) supplemented with 2 - 10% fetal bovine serum (FBS, Thermo Fisher Scientific, Yokohama, Japan), and 1% penicillin/streptomycin (Thermo Fisher Scientific) under 5% CO2 at 37 °C. Huh7 cells can support HAV replication and be used for the screening for antivirals against HAV [13, 14].

Infection of hepatocytes with HAV

Approximately 1.0 x 105 Huh7 cells or 4.0 x 105 PXB cells were washed with PBS twice, and infected with HAV HA11-1299 genotype IIIA strain [13] at a multiplicity of infection (MOI) of 0.01 in 2% FBS media. After 6 hours, media were exchanged, and cells were incubated with or without miso extracts. Huh7 cells and PXB cells were maintained in DMEM supplemented with 2% FBS and dHCGM (PhenixBio), respectively. At days 1 and 4 post-infection, the media were exchanged, and miso extracts were added. One week after infection, total cellular RNA was extracted for further analysis.

RNA extraction and quantitation of HAV RNA

Effects of Japanese miso extracts on the cell viabilities of human hepatocytes. Huh7 cells were treated with Japanese miso extracts: Kurasaigetsuusujiomiso (KU) (a) and Igou-miso (IG) (b) at the indicated concentrations for 24 hours, and cell proliferation was evaluated by MTS assay. PXB cells were also incubated with KU (c) and IG (d) for 24 hours. Data are presented as the mean ± SD of triplicate samples. *p < 0.05 compared to the untreated control. 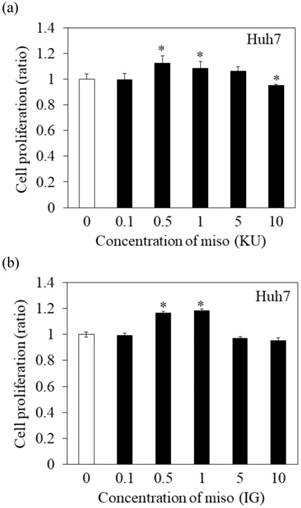 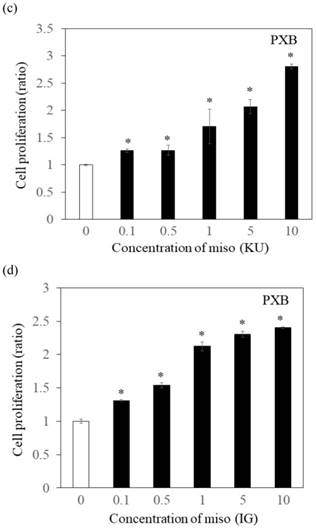 Effects of miso extracts on Huh7 cells and PXB cells

To examine the effects of miso extracts on GRP78 expression and HAV replication, Huh7 cells were incubated with KU or IG at 0.5% concentration. The expression levels of GRP78 protein were enhanced in Huh7 cells treated with miso extracts, compared with untreated control cells (Figure 2a and 2b).

We also examined whether miso extracts could inhibit HAV replication in Huh7 infected with the HAV HA11-1299 strain and incubated with or without KU and IG at a 0.5% concentration. One week after incubation, intracellular HAV RNA was measured by real-time RT-PCR. We observed that HAV RNA levels were inhibited in Huh7 cells treated with Japanese miso extracts (Figure 2c). For virus titration, although PCR may not be suitable to measure the viral titers, our previous study [17] showed the results of our real-time RT-PCR system are well correlated with those of HAV titers evaluated by ELISA [18].

In Figure 1a and 1b, proliferation of Huh7 cells was enhanced when treated with 0.5-1% of miso. The measurement of HAV RNA as absolute value indicated 0.71-fold in KU at a 0.5% concentration, compared with those in control. This result demonstrated that 0.5% of miso (KU) did not enhance HAV replication in Huh7 cells although the difference of cell number may affect relative values of HAV RNA to GAPDH.

Japanese miso extracts enhance GRP78 expression and inhibit HAV HA11-1299 genotype IIIA strain replication in Huh7 cells. Western blot analysis of GRP78 and β-tubulin expression levels in Huh7 cells treated with or without 0.5% Kurasaigetsuusujiomiso (KU) or 0.5% Igou-miso (IG) for 24 hours (a), (b). (c) KU or IG inhibits HAV replication in Huh7 cells. HAV RNA levels were measured by real-time RT-PCR. *p < 0.05 compared to the untreated control (C). Data are presented as the mean ± SD of triplicate samples. 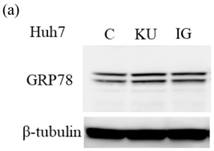 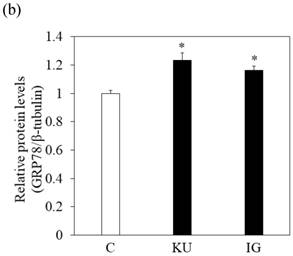 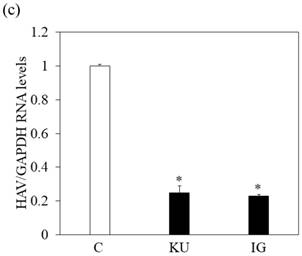 There were no different effects on HAV replication in Huh7 cells between KU and IG. To examine the effect of KU, which has lower salts, on GRP78 expression and HAV replication in PXB cells, cells were incubated with KU at 0.5% concentration. GRP78 protein expression was greatly enhanced in PXB cells treated with KU, compared with the untreated control (Figure 3a and 3b).

We also examined whether KU could inhibit HAV replication in PXB infected with HAV and incubated with or without KU at a 0.5% concentration. One week after incubation, intracellular HAV RNA was measured by real-time RT-PCR. We found that HAV RNA levels were inhibited in PXB cells treated with Japanese miso extracts (Figure 3c). The measurement of HAV RNA as absolute values indicated 0.43-fold in KU at a 0.5% concentration, compared with those in control. This result demonstrated that 0.5% of miso (KU) did not enhance HAV replication in PXB cells although the difference of cell number may affect relative values of HAV RNA to GAPDH.

In the present study, we observed that Japanese miso extract enhanced GRP78 expression and suppressed HAV replication in human hepatocytes treated with those extracts. We also found that PXB cells are susceptible to HAV and HBV infection [15] and observed that HAV replication was inhibited in PXB and Huh7 cells after treatment with KU.

GRP78 is a member of the heat shock protein 70 family of molecular chaperone required for endoplasmic reticulum (ER) stress and stress-induced autophagy. GRP78 is also associated with cancer development including hepatocellular carcinoma (HCC) although HAV does not cause cirrhosis or HCC [19, 20]. Antiviral effects of the Japanese miso extract against HAV may partly involve the enhancement of GRP78 expression, which inhibits HAV replication [9, 10]. Knockdown or knockout of GRP78 could enhance HAV replication [10].

Win et al. [9] also demonstrated that the ER stress inducer thapsigargin could induce GRP78 expression and inhibit HAV replication. Thapsigargin is a non-competitive inhibitor of ER Ca2+ ATPase and induces ER stress. A previous study also showed an association between viral replication and ER stress pathways [21]. However, thapsigargin is associated with cellular apoptosis and autophagy, and causes cell death [22, 23]. In the present study, we did not demonstrate that the direct inhibition of HAV replication was caused by enhancement of GRP78 expression.

Japanese miso Kurasaigetsuusujiomiso (KU) extract enhances GRP78 expression and inhibits HAV HA11-1299 genotype IIIA strain replication in PXB cells. Western blot analysis of GRP78 and GAPDH expression levels in PXB treated with or without 0.5% KU for 24 hours (a), (b). (c) KU inhibits HAV replication in PXB. HAV RNA levels were measured by real-time RT-PCR. *p < 0.05 and **p < 0.01, compared to the untreated control (C). Data are presented as the mean ± SD of triplicate samples. 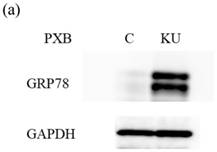 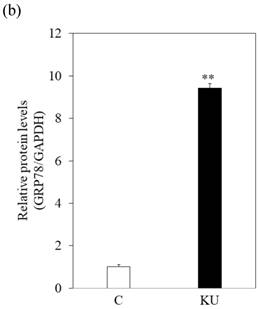 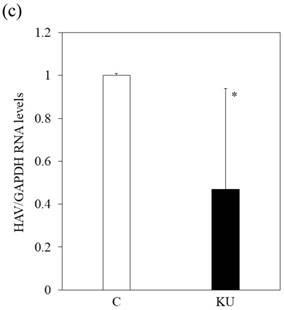 Of interest, we observed the different expression levels of GRP78 and HAV RNA between two cell lines (Figures 2 and 3). It may be why Huh7 and PXB are derived from HCC and non-HCC tissues, respectively. GRP78 protects against chemical agents as well as from the natural machinery of the immune system [24]. Cancer cells resistant to destruction by T killer cells were found to overexpress GRP78 [24]. Human hepatoma Huh7 cells express a large amount of GRP78 at baseline, compared with primary hepatocytes PXB, which are derived from PXB mice. This seemed to cause discrepancy in the results of both cell lines. GRP78, a chaperone and master regulator of the ER stress, has been demonstrated to play a key role in several flavivirus infections [24]. Contrary to our observation, the Japanese encephalitis virus release was reduced 10-fold during siRNA knockdown of a cytoprotective agent GRP78 transcript. Virus infection can lead to significant ER stress. Further studies will be needed about the association between GRP78 and HAV replication [9,10].

On the other hand, 0.5% miso extracts do not have any strong cytotoxicity (Figure 1). It may be high concentration for liver cell when considering the amount of miso consumption because the concentration of miso soup is ~10% miso extracts. However, it is possible that concentration of miso ingredients in the liver after absorption might be higher than those concentration. There are three types of miso: rice-koji miso, soybean-koji miso and barley-koji miso [11]. In the present study, we used rice-koji miso. In general, Japanese people like miso and consume it every day in their meals. Khan et al. [25] found that miso soup significantly decreased the risk of gastric cancer. In addition, Sharp et al. [26] reported that the consumption of miso soup and other soya foods may reduce the risk of HCC. Moreover, Ito et al. [27] demonstrated that the effects of the habitual consumption of miso soup might decrease the heart rate.

It was reported that soybean β-conglycinin-derived peptides have antiviral effects [28]. A prospective randomized clinical trial also showed that soy supplementation decreased ALT levels and may improve hepatic inflammation in patients with hepatitis C virus [29]. Although both KU and IG are rice-koji miso, we also demonstrated that these rice-koji miso had antiviral effects against HAV. Therefore, it has been noted that miso has several beneficial effects on non-communicable and communicable diseases [11, 29, 30].

In the Tokyo area, only 14% of Japanese people have anti-HAV antibodies [31], as socio-economic conditions such as sanitation have been improved. It is possible that an epidemic outbreak of HAV may occur in communities or even extend to several countries. As the mode of transmission of HAV is through the mouth, it may be advantageous to take miso orally to prevent HAV infection. Japanese miso extract may prevent patients with acute hepatitis A from progressing to acute liver failure. In South Korea adjacent to Japan, they also have another rice-koji miso and recently had large hepatitis A outbreaks [32]. In Japan, we have not recently experienced large hepatitis A outbreaks although there were small hepatitis A outbreaks [33]. Socio-economic factors, lifestyle preferences, dietary habits, and many more factors could be responsible for the differences in HAV outbreaks in South Korea versus Japan.

We thank Prof. R. Bartenschlager, Johannes-Gutenberg University Mainz, Germany for giving us Huh7 cells. This research was partly supported by the Japan Agency for Medical Research and Development (AMED) under Grant Number JP17km0908001 and JP18fk0210043.