Cataract is one of the major causes of blindness worldwide [1]. In China, more than half of the 500 million cases of blindness will be due to cataract failure by 2020 [2]. Up till now, surgery is the only effective treatment for cataract-related blindness [3]. Manual small incision cataract surgery and phacoemulsification are the most common cataract surgery methods [4]. This operation has its advantages of smaller intraoperative incision, shorter operative time, quicker recovery of visual acuity and smaller astigmatism. However, intraoperative and postoperative complications may affect the visual acuity recovery. The detachment of the Descemet membrane (DM) is one of the major post-operative complications of phacoemulsification. It manifests as persistent edema of the cornea after surgery, which can cause corneal endothelial decompensation in severe cases and affect the prognosis of vision in surgical patients.

The purpose of this study is to analyze anterior segment optical coherence tomography (AS-OCT) results of Descemet membrane detachment after phacoemulsification and to classify the detachment in combination with clinical manifestations, for further guidance of its clinical treatment.

The surgeries were performed by the same surgeon, Ping Guo with the assistance of her team.

(2) AS-OCT examination method: The operator inputed the patient's personal information in the device control interface first. Then the examinee's head rested on the support to keep it motionless. The examiner adjusted the chin left and right and up and down until the measured eye was aligned to the probe. The front and the rear of the probe was adjusted to achieve optimal focus and then the capture button was pushed on the device to automatically capture and record images with different resolutions through intuitive display of various layers of cornea morphology, anterior chamber, iris, lens and other structures.

(3) The data of the patients with phacoemulsification and subsequent persistent corneal edema in Shenzhen Ophthalmic Hospital from August 2013 to August 2017 were collected. The final diagnosis of the detachment from those patients are confirmed by clinical manifestations and AS-OCT examination. According to the location and the scope of the detachment, the percentage of each type was classified and its causative relationship was analyzed.

2. Clinical manifestation and classification: According to the degree of visual acuity and corneal edema one week after surgery, three types of DM detachment after cataract surgery were identified: (1) simple detachment, (2) symmetrical detachment, and (3) complete detachment. 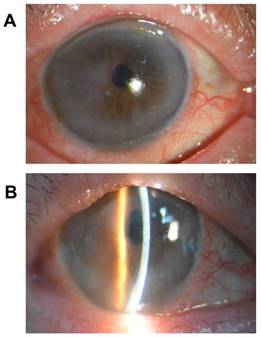 (1) Simple DM detachment: The local corneal edema in the main incision area (lesion area < 1/4 cornea) and the DM folds were observed. Under this situation, it was difficult to distinguish the existence of the DM detachment and the extent of detachment under the slit lamp (Figure 1). The corneas were transparent in the central area of ​​these patients, with mild anterior chamber reaction. The average postoperative visual acuity was 0.60 ± 0.25 (Table 1).

(2) Symmetrical DM detachment: symmetrical corneal stroma edema (corneal thickness 2CT ~ 2.5CT) was accompanied by focal corneal epithelial small blisters or obvious folds of DM. However, it was difficult to see aqueous flare [the floating debris under a slit lamp (Figure 2)]. The aqueous flare was + ~ + +, and the average postoperative visual acuity was 0.40 ± 0.16 (Table 1). 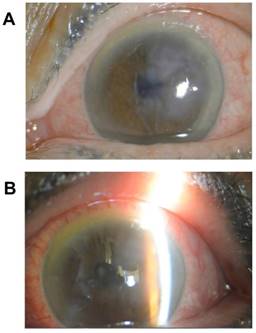 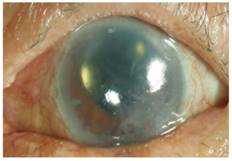 (3) Complete DM detachment: A large area of cornea (> 1/2 cornea) matrix suffered from full-thickness edema and opacity. The corneal thickness was > 2.5CT, accompanied by corneal epithelial diffuse blisters. It was clear to see aqueous flare [the floating debris under a slit lamp (Figure 3)]. The aqueous flare is + +~ + ++, and the average postoperative visual acuity was 0.10 ± 0.04 (Table 1). 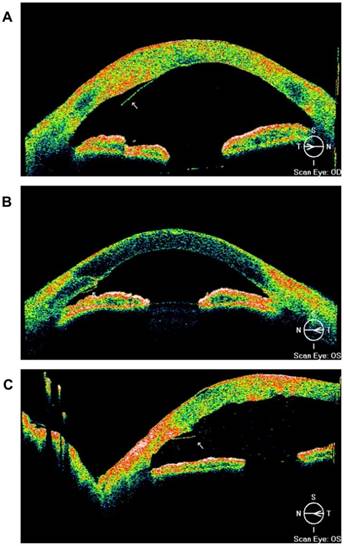 (2) Symmetrical detachment: The detachment was in the limbal area (1/4 cornea area <detached area <1/2 corneal area) that appeared symmetrically on the surgical incision and the opposite sites, which accounted for 19.20% of the total number of cases (5/26, Table 1). AS-OCT examination revealed the local stromal edema at the corneal incision site, separation of the DM and corneal stroma layer, detached DM floating in the anterior chamber and thickening of the corneal stromal layer due to edema at the opposite of the incision site. At the same time the DM and the stromal layer were detached. The detached DM floated in the anterior chamber, and many fine granular exudates were in the anterior chamber (Figure 5).

(3) Complete detachment: The detachment referred to the total detachment of the Descemet membrane (more than 1/2 of the corneal area), which accounted for 11.50% of total cases (3/26, Table 1). AS-OCT showed corneal stroma thickening with obvious edema. The DM was almost completely separated from the corneal stroma layer. The detached DM floated in the anterior chamber partially touching the iris surface, and in the severe case, corneal endothelial dysfunction was observed (Figure 6). 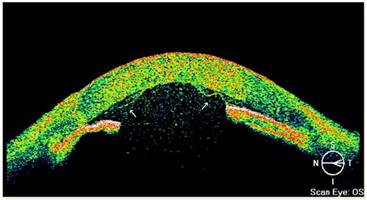 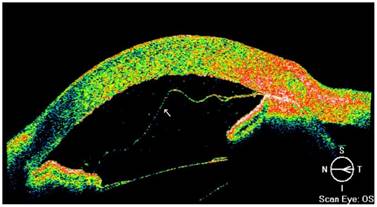 Due to the increasing popularity of cataract surgery, postoperative reports of corneal Descemet membrane detachment are common. The rate of post-cystectomy conjunctival detachment was 2.6%, while the incidence of phacoemulsification was about 0.5% [5]. Most of detachment of mild to moderate corneal DM could be self-healing. However, some detachment is complicated with folding, curly or complete detachment of the DM causing refractory corneal stromal edema or even corneal endothelial dysfunction with severe decrease of visual acuity. The etiology for the detachment of the corneal DM mainly includes the following aspects: (1) losing attachment between the DM and the anterior stromal layer anatomically. The two layers can be easily separated under external force. Because of their termination on the Schwalbe line, the location of phacoemulsification cataract autograft incision in the clear cornea, and the tendency of corneal intraoperative incisions into the anterior chamber, these forces may create lateral traction and cause separation of loosely attached DM [6]. (2) For the surgical instruments, if the disposable and reusable tools are not sharp, the inappropriate force to penetrate the corneal inner tissue easily leads to separation of the DM from the stromal layer or enlargement of the gap between the two layers, a hidden danger for detachment. In addition, if the microscope depth of field is too small, the detached DM may be mistakenly identified as the anterior capsule and thus sucked out, causing a wide range of DM detachment. (3) For the surgical skills, if the surgeon is less skilled or if the surgery is too difficult, the surgical device may be repeatedly placed into and out of the anterior chamber causing liquid infiltration between the two layers. All these factors may increase the risk of detachment of the DM [7], however (4) patients themselves may also increase the risk of the detachment. In this study, 88.5% (23/26) of patients were over 70 years of age, indicating that the older patients are prone to detachment of the DM. In the case of Fuchs corneal endothelial dystrophy, the adhesion between the two layers are decreased. They are prone to detachment under the impact of high water flow. In the case of poor patient cooperation or light anesthesia, the patients may move their eyes suddenly to cause damage of the corneal DM, causing postoperative detachment. Even some ocular trauma after surgery can lead to delayed DM detachment [8, 9].

AS-OCT is an optical, non-contact, ophthalmic imaging device that enables tomographic and quantitative measurement of the entire anterior segment structure [10]. The principle is based on the optical scattering of different ocular tissue structures, using interferometry for two-dimensional imaging and quantitative analysis. AS-OCT examination is an optical penetrating examination not affected by corneal edema, and can easily be used to find DM detachment while the conventional slit lamp cannot [11]. AS-OCT is of high resolution, accurate to the micron level, which can clearly distinguish the layers of the corneal tissue structure. At the same time due its non-invasiveness, AS-OCT can minimize the incidence of eye surgery infection, especially in early postoperative patients, which can intuitively be used for determination of the probable causes and proposal of the appropriate treatments. In this study, the location and scope of the detachment of the DM can be clearly distinguished by AS-OCT. The simple DM detachment, referring to the detachment at the surgical incision (Figure 1), can be divided into detachments in the anterior and posterior incision sites. In symmetrical DM detachment, the detachment was present in the corneal incision site and the site opposite of incision (Figure 2). Symmetrical DM detachment was most likely caused by preexisting intrinsic abnormality in stromal adherence to the Descemet membrane or long-term shear force caused by aqueous humor entrance to the periphery that never reached complete detachment due to positive pressure [12, 13]. The detachment ranged from 1/4 to 1/2 of the corneal area. The complete detachment of DM refers to the detachment of more than 1/2 of the cornea (Figure 3). In the past, the grading standards for the detachment were created by Liu Zuguo in 1990 [14]. That is, detachments were divided into five grades: the detachment range less than 1/8 cornea was local, the detachment range greater than 1/8 but less than 1/4 cornea was mild, the detachment range greater than 1/4 but less than 1/2 was moderate, the detachment range equal to or greater than 1/2 was severe, and the complete detachment was full. Due to limitation of the equipment at that time, the previous classification was based on rough estimation of the extent of corneal edema and the range of detachment of DM. Therefore, it is difficult to determine the precise location of DM detachment. In contrast, the current AS-OCT [15] can accurately distinguish the location and the extent of the DM detachment (Figure 4-Figure 6), and suggest a close relationship between the detachment and the incision of DM. Therefore, our classification, combined with the site and the range of the detachment, helps analyze the cause and severity of DM detachment. Such a method is beneficial for guidance of the clinical diagnosis and the treatment of DM detachment.

Corneal persistent edema and its progressive increase after cataract surgery should be an indicator of possible detachment of the Descemet membrane after exclusion of intraocular pressure and other factors. AS-OCT examination can be clearly used for observation of the position and the range of DM detachment. Simple detachment and more complicated detachment of DM can be treated successfully by strengthening the nutrition of the cornea and adopting symptomatic treatment of edema. In such cases, most patients with DM detachment can gradually repair themselves. If the detachment is combined with DM curls, folds or the detachment is complete, surgery is recommended as soon as possible to avoid excessive loss of endothelial cells and thus the occurrence of bullous keratopathy [16]. Sterile air or C3F8 can be injected into the corneal anterior chamber during surgery [17-19]. According to the orientation of the detachment, the patients should take a semi-recumbent or lateral position to rest. At the same time, 200g / L mannitol or oral methazolamide can be used to reduce the intraocular pressure. Such a combination can be adopted to achieve good therapeutic effect [20].

In summary, DM detachment after phacoemulsification is associated with a variety of factors. AS-OCT examination can be used to find clear detachment of the DM. The position of detachment and surgical incision were found to be closely related. The location and the scope of detachment can be used to guide clinical treatments and improve prognosis of patients.