Background: The suppression of tumorigenicity 2 (ST2) is associated with cardiac remodeling and tissue fibrosis. It is well known as a novel biomarker on predictor of cardiovascular events in patients with heart failure. In patients needed to start dialysis treatment, most of them had congestive heart failure. However, the prognostic implications of serum ST2 level are unknown in incident hemodialysis patients.

Methods: A total 182 patients undergoing incident hemodialysis were consecutively enrolled from November 2011 to December 2014. These patients were classified into two groups according to their median ST2 levels. The two groups were subsequently compared with respect to their major adverse cerebro-cardiovascular events (MACCE) including all-cause mortality, heart failure admission, acute coronary syndrome, and nonfatal stroke.

Results: The median duration of follow up was 628 days (interquartile range 382 to 1,052 days). ST2 was significant correlated with variable echocardiographic parameters. The parameters of diastolic function, deceleration time of the early filing velocity and maximal tricuspid regurgitation velocity were independently associated with the ST2 levels. High ST2 group had significantly higher incidence of all-cause mortality, and MACCE. High ST2 was a significant independent predictor of MACCE (adjusted hazard ratio 2.33, 95% confidence interval 1.12 to 4.87, p=0.024).

Conclusion: The ST2 is associated with diastolic function and may be a predictor of clinical outcomes in incident hemodialysis patients.

Although there have been tremendous improvements in the quality and utility of dialysis in recent years, death from cardiovascular events is still the biggest problem of dialysis (4). Therefore, it is very important to predict the occurrence of cardiovascular disease in chronic dialysis patients, and many studies have been conducted on whether various biomarkers can play such roles.

The suppression of tumorigenicity 2 (ST2) is expressed as a response to myocardial stress and injury and is known as a member of the interleukin-1 receptor family (5). It can be regarded as a marker of fibrosis, remodeling, and inflammation. ST2 is well known as a new biomarker to predict cardiovascular events in patients with heart failure. (6~8). There are still few studies on the clinical usefulness of ST2 in dialysis patients, especially those who started hemodialysis for the first time, and few studies have investigated the association of ST2 levels with cardiac function and prognosis in these patients.

Our objective was to analyze the relationship between the ST2 level and echocardiographic parameter of cardiac function, and the prognostic value of ST2 in incident hemodialysis patients.

This study consisted of 182 consecutive patients who started hemodialysis treatment for the first time in Incheon St. Mary's Hospital between November 2011 and December 2014. Patients who provided informed consent to enroll the study and blood bank. No industries were involved in the design or performance of the study or the analysis of its results. The study protocol was reviewed and approved by the appropriate institutional review board.

The primary study end point was major adverse cerebro-cardiovascular events (MACCE) including all-cause mortality, hospitalization for heart failure, acute coronary syndrome (ACS), and nonfatal stroke. All-cause mortality was considered to be cardiac death after the exclusion of non-cardiac causes. ACS was defined unstable angina or acute myocardial infarction. Stroke, which was signified by the presence of neurologic deficits, was confirmed by a neurologist who evaluated the imaging studies of affected patients. Patient follow-up data, including censored survival data, were collected through July 31, 2015 via hospital chart, telephone interviews with patients by trained reviewers who were blinded to the study result, and reviews of the database of the National Health Insurance Corporation, Korea, using a unique personal identification number.

Continuous variables are expressed as mean ± standard deviation and are compared using Student's t-test or the Mann-Whitney U-test. Discrete variables are expressed as percentages and compared using the χ2-test or Fisher's exact test. Receiver operating characteristic (ROC) curve analyses were performed to identify the optimal cut-off value of biomarkers with the highest sensitivity and specificity associated with occurrence of events. Pearson's univariate correlation analysis for continuous variables or Spearman rank correlation analysis for discrete variables were carried out to analyze the association between the ST2 and variables. To determine variables independently associated with ST2, a stepwise multiple linear regression analysis using inclusion and exclusion criteria of 0.05 and 0.10, respectively, was performed. A multivariable Cox regression analysis (after confirming the appropriateness of the proportional hazards assumption) was carried out to identify independent predictors for cardiovascular events. Univariate Cox regression analysis was carried out with conventional risk factors and variables with a statistical p value less than < 0.05 in the baseline characteristics (Table 1.) Then, variables with a significant association (p < 0.05) in the univariate analysis and conventional risk factors were evaluated in the multivariable Cox regression model. The effect of each variable in developing models was assessed using the Wald test and described as hazard ratios (HRs) with 95 % confidence intervals (CIs). The cumulative survival was estimated using the Kaplan-Meier survival curves and compared using the log-rank tests. All statistical analyses were two-tailed, with clinical significance defined as values of p less than 0.05. Statistical analysis was carried out using Statistical Analysis Software package (SAS version 9.1, SAS Institute, Cary, North Carolina).

Characteristics of the study populations

Baseline characteristics between the two groups are shown in table 1. High ST2 group were older and had more reduced kidney function. These patients with high ST2 were more likely to have higher high sensitivity C-reactive protein (hs-CRP), creatine kinase-MB fraction (CK-MB), galectin-3, and B-type natriuretic peptide (BNP) and lower albumin level. Echocardiographic data was obtained in 172 patients. Patients with high ST2 had a worse diastolic function than those with low ST2 and no significant difference in systolic function compared to those with low ST2. 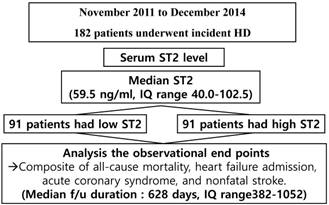 Baseline patient demographic, clinical, and echocardiographic data according to ST2

Data are presented as the mean ± standard deviation or n (%).

The cutoff of each parameter followed the guidelines of echocardiography (9,10).

Table 2 showed that there is a difference in median ST2 level according to presence or absence of echocardiographic functional abnormality. When the function of each echocardiography was abnormal, the median value of ST2 was higher. With the exceptions of e', LA volume index (LAVI), and LV mass index (LVMI), the presence of each abnormality of echocardiographic function was significantly associated with higher median ST2 level. A univariate analysis showed that E/A, DT, TR Vmax, LAVI, and LVEF were significantly correlated with ST2. In the stepwise multiple linear regression analysis, we included variables with p-value of < 0.05 in a univariate analysis, DT and LAVI were significantly correlated with ST2 level (table 3).

Clinical outcomes for the study populations

The median duration of follow-up period was 628 days (IQR, 382-1052). Complete follow-up data for MACCE were obtained in 100% of the overall cohort for the duration of this study.

Predictors of the MACCE as determined by univariate Cox regression analysis

†ST-2 as a continuous variable.

‡ST2 as a logarithmic transformed variable.

In the high ST2 group, the MACCE occurred in a total of 28 patients (30.8%), while in the low ST2 group, only 13 patients (14.3%) during long-term follow-up. The incidence of all-cause mortality and composite of all-cause mortality and heart failure admission were significantly higher in patients with high ST2 than in those with low ST2 (Table 5). Based on analysis of the study population, the high ST2 showed significant association with the MACCE (unadjusted HR 2.38, 95% CI 1.23 to 4.59, p=0.01), and multivariate analysis showed the high ST2 was associated with MACCE (adjusted HR 2.33, 95% CI 1.12 to 4.87, p=0.024) (Table 5). Restricted cubic spline regression showed the ST2 has a positive increase in hazard of the MACCE (figure 3). 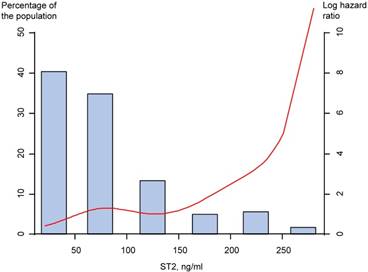 This study provides evidence that initial serum ST2 levels is significantly associated with LV diastolic dysfunction and can be used to predict clinical outcomes, especially all-cause mortality, in incident hemodialysis patients. The serum ST2 levels is a significant predictor even after major risk factors, including baseline conventional risk factors, major biomarkers of heart failure, and echocardiographic parameters, have been taken into account. To our knowledge, this study is the first data which show the clinical impact of ST2 in incident hemodialysis patients.

Kaplan-Meier Curves for (A) all-cause mortality and (B) MACCE. MACCE=major adverse cerebro-cardiovascular events.

Several studies have shown that ST2 level is a prognostic factor in patients with acute or chronic HF and has additional prognostic features when used with BNP (12-15). In addition, it was confirmed that ST2 level associated with new heart failure and cardiovascular mortality in patients with acute myocardial infarction (16) and cardiac reverse remodeling in patients with heart failure (17). Another study showed that ST2 was an independent prognostic factor and had a better prognostic ability than BNP in chronic hemodialysis patients (18). In other study showing that ST2 is a predictor of all-cause and cardiovascular mortality in maintenance dialysis patients, ST2 showed no greater predictive power than BNP but showed greater predictive power when used with BNP (19).

ST2 is a member of the interleukin-1 receptor family and is formally known as interleukin 1 receptor like 1. In rat model, ST2 was rapidly expressed by mechanical overload to cardiac myocytes (20). The ligand of ST2 is interleukin-33, and interleukin-33 is involved in reducing the fibrosis or hypertrophy of mechanically stressed tissues. Thus, ST2 plays a role in suppressing the effects of IL-33, so that excessive or abnormal signing of ST2 results in myocardial hypertrophy, fibrosis, and ventricular dysfunction (21).

Unlike BNP or galectin-3, ST2 is unique in that it's serum concentration has minimal effect on impaired renal function (22,23). Galectin-3 and BNP are also major prognostic factors in patients with renal impairment, but increased concentration of these marker as it is partially handled and cleared by the kidney may complicate the interpretation of the prognosis in patients with renal dysfunction (24). In fact, one study showed that the actual prognostic ability decreased by adjusted with impaired renal function (25). Thus, in patients with renal impairment, ST2 may be more helpful in predicting prognosis, and in this study, galectin-3 did not predict outcome events unlike ST2.

Echocardiography allows accurate assessment of cardiac function and provides prognostic information in hemodialysis patients, but it is not readily available in all dialysis units. Although this study was performed with small number of patients, ST2 is associated with echocardiographic parameters and all-cause mortality, it is likely that ST2 can be used as a tool for early risk stratification in patients who initiate hemodialysis treatment.

There are some limitations to this study. First, because this present study was nonrandomized and observational design, it may have been influenced by selection bias and confounding factors. Second, we measured the serum ST2 level only once at the initial hemodialysis time point. Therefore, it is not known whether plasma ST2 levels fluctuate during the follow-up period of maintenance hemodialysis. Third, only the medications prescribed at discharge were recorded, and any changes in medication and non-adherence or adverse drug effect of medicine during the follow-up period which may potentially influence clinical outcomes were not documented. Finally, our study is also limited as patients of single center and little sample size. More researches are needed in the large population setting.

The serum ST2 level is significantly associated with diastolic function and can predict all-cause mortality and clinical outcomes in incident hemodialysis patients.

9. Lang RM, Badano LP, Mor-Avi V. et al. Recommendations for cardiac chamber quantification by echocardiography in adults: an update from the American Society of Echocardiography and the European Association of Cardiovascular Imaging. J Am Soc Echocardiogr. 2015;28:1-39

10. Nagueh SF, Smiseth OA, Appleton CP. et al. Recommendations for the Evaluation of Left Ventricular Diastolic Function by Echocardiography: An Update from the American Society of Echocardiography and the European Association of Cardiovascular Imaging. J Am Soc Echocardiogr. 2016;29:277-314

13. Bayes-Genis A, de Antonio M, Galán A. et al. Combined use of high-sensitivity ST2 and NTproBNP to improve the prediction of death in heart failure. Eur J Heart Fail. 2012;14:32-8