Background: Chronic alcohol consumption is a major cause of liver injury. However, the molecular mechanisms by which alcohol impairs hepatocellular function and induces cell death remain unclear. Macroautophagy (hereafter called 'autophagy') is a degradation pathway involved in the survival or death of cells during conditions of cellular stress. This study examines the effect of chronic alcohol consumption on hepatocellular autophagy in an animal model.

Conclusions: In this model, chronic alcohol consumption impaired hepatocellular autophagy and induced apoptotic cell death. It appears that changes in autophagy might contribute to alcohol-induced structural and functional hepatocellular injury.

Chronic alcohol consumption is a well-known risk factor for the development of alcoholic liver disease. Alcohol-induced hepatocellular injury is mainly caused by reactive oxygen species and local inflammation, which causes structural and functional damage of the liver and ultimately leads to increased loss of hepatic cells (1-3). Progression of alcoholic liver disease exhibits a clinical spectrum ranging from steatosis to hepatitis, inflammation, and liver cirrhosis.

Of the diverse mechanisms involved in the regulation of the survival or death of cells during cellular stress, autophagy has emerged as an important pathway. Macroautophagy (hereafter referred to as autophagy) is an evolutionarily conserved cellular degradation process involving the transport and delivery of cytoplasmic protein complexes or organelles to the lysosome for the purpose of supplying substrates for energy generation or maintaining cellular homeostasis (4,5). Autophagy can be considered a temporary survival mechanism during periods of cellular stress (5). Moreover, autophagy may act as a surveillance mechanism in stressed or injured cells to remove damaged organelles that otherwise would be harmful or could trigger apoptotic cell death. Autophagy has gained increasing attention because its pathway has been implicated in several human diseases, and as a possibly new type of programmed cell death that differs from classical apoptosis (6). However, the contribution of autophagy to programmed cell death remains a matter of intense debate. There is complex cross-talk to the pathway of classical apoptosis and it is now generally accepted that inhibition of autophagy increases susceptibility to cell death (6).

In the liver, however, a basal level of autophagic turnover is essential for normal liver function. Hepatic autophagy can be considerably increased in response to starvation or stressed conditions, thereby contributing to cell survival and maintenance of normal liver function (7,8). Hepatocytes engage higher levels of autophagy than other types of cells (9). Therefore, it is thought that impairment of hepatic autophagy may have a considerable effect on hepatocellular function (5). The impact of alcohol consumption on the autophagic pathway in the liver is not yet completely understood. Ding and colleagues showed that autophagy is stimulated under acute administration of alcohol and, under these conditions, autophagy protected liver cells from acute alcohol toxicity and reduced hepatic steatosis (10). On the other hand, little is known about the impact of chronic alcohol consumption on hepatocellular autophagy. There is evidence that chronic alcohol may inhibit autophagic mechanisms in the liver. Lin and colleagues described suppression of autophagy in a mouse model with chronic alcohol intake over a period of 4 weeks; remarkably, alcohol-induced liver injury was worse when autophagy was inhibited (11).

A total of 20 adult male Wistar rats (300-350g) (Harlan; Rossdorf, Germany) were randomly assigned to an alcohol-treated group (n=10) or to a control group (n=10). To establish a model of chronic alcohol consumption, the Lieber-DeCarli liquid diet technique was used (Lieber and DeCarli, 1989). The diet (E15784-301/AIN93G-VM) with maltose-dextrin (dextrose equivalent 8.0-9.9, R111M040) or alcohol (5% v/v) providing 36% of total calories was purchased from Ssniff (Soest, Germany) and contained EtOH 5% (v/v) for the alcohol-treated group. For the control group, an isocaloric diet with maltrose-dextrin instead of EtOH was used. Drinking water was provided ad libitum in both groups. Water intake, diet and body weight were measured daily in each animal. Rats were housed in a room with 12-h light/dark cycles.

After 12 weeks, all rats were anesthetized with isoflurane and sacrificed by cervical dislocation. Liver was removed, immediately frozen on dry ice, and stored at -80°C for subsequent processing. To examine the effects of chronic alcohol consumption on the autophagic pathway of the liver, the 10 animals in each group were examined.

Total glutathione (GSH and GSSG) was measured in liver homogenates using the thiol reagent 5,50 dithiobis-2-nitrobenzoic acid (DTNB), as described previously (12). In short, for determination of reduced glutathione (GSH) and oxidized glutathione (GSSG), livers were homogenized and treated with a mixture of metaphosphoric acid, EDTA and NaCl. After centrifugation, aliquots were taken for neutralization with disodiumhydrogen-phosphate followed by addition of DTNB. GSH was determined in a spectrophotometer at 412 nm. For determination of GSSG, 4-vinylpyridine was added. After incubation for 1 h at room temperature, GSSG was determined spectrophotometrically at 412 nm.

Sequence of oligonucleotides used for qRT-PCR.

Chronic ethanol induces oxidative and cellular stress in the liver

To examine the effects of chronic alcohol consumption on cellular and oxidative stress in the liver, we evaluated the expression levels of heme oxygenase-1 (HO-1) and measured levels of reduced glutathione (GSH) and oxidized glutathione (GSSH). In contrast to control animals, rats fed an alcohol-containing diet for 12 weeks showed a significantly higher expression of the stress marker protein HO-1 in the liver (Figure 1 A, B). Also, analysis of reduced and oxidized glutathione levels showed that GSH levels were significantly higher in the liver of rats after 12 weeks of alcohol consumption, whereas GSSH levels remained unchanged (Figure 1 C). Correspondingly, the GSH/GSSH ratio was significantly elevated in alcohol-fed rats, indicating oxidative stress in the liver in this chronic alcohol model. 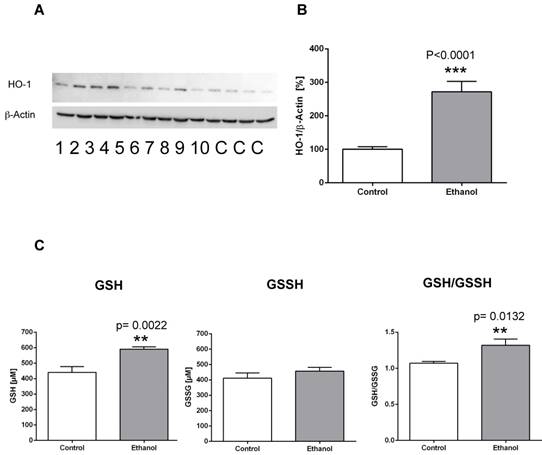 To further analyze the mechanisms of cell death in this chronic model of alcohol consumption, we determined the expression of key regulatory proteins of the apoptotic signaling pathway using Western blot analysis. Chronic alcohol consumption caused a marked induction of cleaved caspase 3 in the liver, indicating a significantly increased activity of the execution phase of cell apoptosis (Figure 4A). Also, cleavage of PARP-1 was significantly induced in liver cells of alcohol-fed animals (Figure 4B). Both proteins are markers of programmed cell death and the presence of their cleaved forms indicates activation of the apoptotic signaling pathway in liver cells of alcohol-fed rats. Along that line, expression of the anti-apoptotic Bcl-2 protein showed no significant difference between controls and alcohol-fed rats (Figure 4 C).

This study demonstrates that, in this animal model, chronic alcohol consumption i) impairs autophagy, ii) promotes apoptotic cell death in the liver, and iii) increases cellular and oxidative stress in the liver.

The autophagic response to chronic alcohol intake was assessed by analysis of the expression of specific and characteristic features of the pathway. Beclin-1 is the key regulator of autophagy. Autophagic induction via ATG-5 then mediates cleavage of LC3-I. This, in turn, generates LC3-II-complexes and autophagosomal membranes (14). Chronic alcohol consumption for 12 weeks significantly decreased Beclin-1 and ATG-5 expression in the liver on both the transcriptional and translational level. Furthermore, alcohol intake intensified markers and effectors of programmed cell-death, such as cleaved caspase-3 and cleaved PARP-1. Cleavage of PARP-1 facilitates cellular disassembly and serves as a valid marker of cells undergoing apoptosis. In addition, our results show that transcriptional and translational expression of the anti-apoptotic Bcl-2 protein remained unchanged. These results indicate that chronic exposure to alcohol not only downregulates the hepatocellular autophagic pathway, but also activates apoptotic, programmed cell death. Activation and successful processing of the autophagic pathway increases LC3-II complexes, indicating the formation of functional autophagosomes (15). Further, activation of autophagy normally reduces the protein expression of p62/SQSTM1, while pharmacological or genetic inhibition of autophagy increases intracellular p62/SQSTM1 levels (16,17). p62/SQSTM1 is a degradation product of autophagy and widely used as a marker of autophagic flux (16). In the present study, chronic alcohol consumption for 12 weeks significantly increased the expression of LC3-I, LC3-II and p62/SQSTM1 in the liver, whereas the LC3-II/LC3-I ratio (a feature of autophagic activation) remained unchanged. When p62/SQSTM1 also increases (i.e., accumulates), the autophagic flux is thought to be stopped at the process of the lysosome (17, 18). The disturbed autophagic flux induces cellular stress and, finally, apoptosis. These results support the finding that chronic alcohol consumption significantly impairs and alters autophagic mechanisms in the liver. 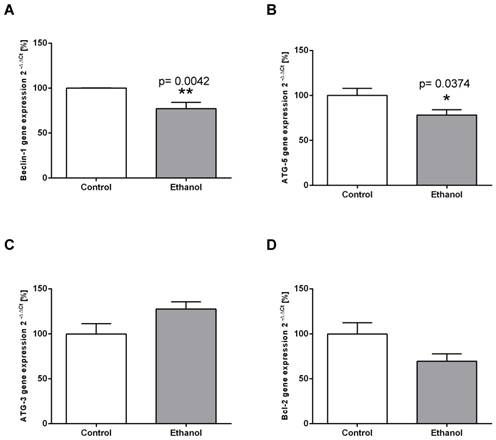 Only a few studies have investigated alcohol-induced changes of autophagy in the liver. For example, in mice fed with the Lieber-DeCarli diet for 4 weeks, autophagy was inhibited in a dose-dependent manner (11). Also, in a model of alcohol-fed mice, inhibition of AMPK and subsequent autophagic suppression was observed in the liver (20). In line with these findings, alcohol-induced suppression of autophagy has been demonstrated in several in vitro models. In monocytic U937, CD4 Jurkat cells, and in neuronal cells, exposure to alcohol downregulated autophagy-related proteins, such as Beclin-1 and others (21,22). In contrast to these findings, autophagy was found to be activated in cultured primary hepatocytes by acute exposure to alcohol (10,23). Oxidative stress is as a major contributing factor of this activation (24). Further, acute alcohol inhibits mTOR signaling and activates AMPK under oxidative stress conditions which, in turn, activates autophagy (25). However, these latter findings only hold true for models of acute alcohol exposure. In contrast, long-lasting chronic alcohol exposure may exert completely different effects and may eventually suppress autophagy. However, reasons for the different effects of acute versus chronic alcohol on the autophagic pathway remain to be elucidated. Autophagy is usually considered to be a temporary survival mechanism during short periods of starvation, energy depletion, or cellular stress (26). It is possible that chronic alcohol (i.e., long-lasting cellular and oxidative stress) depletes hepatocellular autophagic resources and exceeds the capacity of the autophagic pathway over time. Also, mTOR (a main inhibitor of autophagy) is activated by chronic alcohol and extensive nutrient supply (26-28). Whether or not activated mTOR signaling plays a critical role in the suppression of autophagy after chronic alcohol intake needs to be examined in future studies.

Changes in hepatocellular autophagy, such as the effects described above, might be relevant for the functionality of liver cells. Failure to eliminate potentially harmful substances by autophagic processes might disturb cellular integrity and may cause cell death, inflammation and hepatic disease (5). There is increasing evidence that autophagy might be a potential therapeutic target for hepatic diseases. Stimulation of autophagy inhibited hepatic steatosis in both acute and chronic alcoholic fatty liver disease in mice (10,11). Also, stimulation of autophagy attenuated alcohol-induced acute hepatoxicity (10). Therefore, the role of autophagy in chronic alcohol consumption needs further elucidation. Whether activation of this pathway constitutes a potential therapeutic approach in chronic alcohol disease warrants further investigation.

Protein expression of (A) Beclin-1, (B) LC3-I/LC3-II and (C) p62/ SQSTM1 in livers of rats fed with an alcohol-containing diet for 12 weeks (ethanol, lanes 1-10) and controls (lanes C; for more clarity, protein lysates of controls have been pooled). Detection of β-actin served as loading control. This example is representative of a series of blots. Quantification of bands is expressed as density ratio of indicated protein/β-actin (%); control set to 100%); **p<0.01 compared with controls; data are presented as mean ± SEM (n=10).

Protein expression of (A) (cleaved) Caspase-3, (B) (cleaved) PARP-1 and (C) Bcl-2 in livers of rats after 12 weeks of chronic alcohol consumption (ethanol; lanes 1-10) or controls (lanes C, for more clarity, protein lysates of controls have been pooled). Detection of β-actin served as loading control. This example is representative of a series of blots. Quantification of bands is expressed as density ratio of indicated protein/β-actin (%); control set to 100%; *p<0.05, **p<0.01 compared with controls; data are presented as mean ± SEM (n=10).

2. Lieber CS. Alcoholic fatty liver: Its pathogenesis and mechanism of progression to inflammation and fibrosis. Alcohol. 2004;34(1):9-19