Hepatocellular carcinoma (HCC) is the fifth most common cancer amongst men worldwide and the ninth in women, and a major cause of cancer-related mortality [1]. HCC is associated with a low 5-year survival rate and an increasing mortality rate [2, 3]. In Taiwan, HCC is the second leading cause of cancer-associated deaths [4, 5].

Genetic variation plays a key role in HCC susceptibility and development of the disease. The majority of people who are exposed to the well-known infectious, lifestyle or environmental risk factors (i.e., hepatitis B or C virus infection, alcohol abuse or non-alcoholic fatty liver disease associated with obesity, type 2 diabetes or insulin resistance) do not develop HCC, which suggests that individual susceptibility modulates tumorigenesis [4]. Genotype distribution frequency data can be used to map single nucleotide polymorphism (SNP) diversity in a population and to examine the risk and development of specific diseases [6]. Emerging reports indicate an association between SNPs in certain genes and the susceptibility and clinicopathological status of HCC. For instance, individuals carrying specific interleukin-18 (IL-18), high-mobility group box protein 1 (HMGB1) or C-C chemokine ligand 4 (CCL4) SNPs are at higher risk of HCC than wild-type carriers [7-9].

Metastasis is a key step in tumor development and the chief cause of mortality for patients with cancer. There are several steps by which cells detach from the primary tumor and form a secondary tumor at a distant site [10]. Matrix metalloproteinases (MMPs) are well-known proteases associated with the breakdown of the extracellular matrix (ECM) surrounding tumor cells [11]. Increasing evidence has indicated that raised levels of MMPs are associated with cancer development and are linked to shorter survival of patients [12].

MMP-11, also known as stromelysin-3, has been observed during wound healing in normal physiologic conditions and in intense tissue remodeling during embryogenesis, as well as tissue involution [13]. However, MMP-11 is unlike most MMP family members which does not cleave major components of the ECM. In addition, the laminin receptor, insulin-like growth factor binding protein 1, collagen VI, and α1-proteinase inhibitor are major substrates of MMP-11 [14]. Upregulation of MMP-11 expression has been found in human carcinomas, such as lung, ovarian, breast, colorectal, and HCC [15, 16]. Genetic polymorphisms of MMP-11 have been indicated in several different cancer types, including oral and breast cancers [17, 18]. Scant research has examined the association between MMP-11 SNPs, HCC risk and prognosis. We therefore conducted a case-control study to evaluate the role of five MMP-11 SNPs on HCC susceptibility and clinicopathological features in a cohort of Chinese Han individuals.

We enrolled 293 patients (cases) presenting with HCC to Chung Shan Medical University Hospital, Taiwan, between 2007 and 2015. A total of 586 anonymized healthy controls (HCs) without a history of cancer were randomly selected from the Taiwan Biobank Project. All study participants were of Chinese Han ethnicity. HCC patients were staged according to the 2010 American Joint Committee on Cancer (AJCC) TNM staging system, which incorporates tumor morphology, the number of lymph nodes affected, and metastases [19]. Before entering the study, each participant provided informed written consent and completed a structured questionnaire about sociodemographic status, cigarette and alcohol use. Liver cirrhosis was diagnosed by biopsy, appropriate sagittal CT or MRI scans, or biochemical evidence of liver parenchymal damage with endoscopic esophageal or gastric varices. The study was approved prior to commencement by Chung Shan Medical University Hospital's Institutional Review Board.

Five SNPs in MMP-11 were selected from the International HapMap Project data for this study. We included the nonsynonymous SNPs rs738792 (Ala38Val) and synonymous SNPs rs28382575 (Pro475Pro) in the coding sequences of the gene. To obtain adequate power to evaluate the potential association, we investigated rs2267029 with minor allelic frequencies of >5%. Furthermore, the rs738791 and rs131451 were selected in this study because the gene polymorphism of the SNP has been found to associate with myopia [20].

Genotype-tissue expression (GTEx) data were used to identify correlations between SNPs and levels of MMP-11 expression [22, 23]. We conducted an investigation into expression quantitative trait loci (eQTLs), to determine the functional role of phenotype-associated SNPs.

Mann-Whitney U test or Fisher's exact test was used between healthy controls and patients with HCC.

a adjusted for the effects of age and gender.

The ORs with analyzed by their 95% CIs were estimated by logistic regression models.

> T2: multiple tumor more than 5 cm or tumor involving a major branch of the portal or hepatic vein(s)

We searched the GTEx database to investigate whether rs738792 was associated with MMP-11 expression. Individuals carrying a genotype with the variant C at rs738792 showed a trend for reduced expression of MMP-11, compared with the wild-type TT homozygous genotypes (p < 0.05; Figure 1).

The ORs with analyzed by their 95% CIs were estimated by logistic regression models.

> T2: multiple tumor more than 5 cm or tumor involving a major branch of the portal or hepatic vein(s)

Preclinical studies have indicated that MMP-11 mediates metastasis of cancer including MMP-11 expression regulates local or distant invasion in transgenic mice [25]. Furthermore, knockdown of MMP-11 expression in the mouse hepatocarcinoma cell line Hca-F inhibits its metastatic proliferation to lymph nodes [26]. In the breast cancer microenvironment also found MMP-11-positive mononuclear inflammatory cells infiltration and facilitated to form metastases [27]. The role of MMP-11 in the metastatic process, however, might be complex and even dual, probably depending on different spatiotemporal factors [28]. When we examined the influence of the MMP-11 gene upon the metastatic phenotype of HCC, we discovered a significantly higher likelihood of lymph node metastasis among patients carrying the rs28382575 C/T+C/C genotype as compared with T/T carriers. These results suggest that knockdown MMP-11 might be a valuable therapeutic strategy for HCC lymph node metastasis.

Mann-Whitney U test was used between two groups. 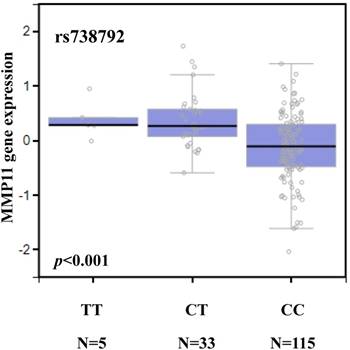 In view of the high occurrence rate and lethality of HCC, lowering the incidence and mortality rates present an important challenge. Infection with HBV or HCV, a history of liver cirrhosis, family history of HCC, and alcohol consumption are the dominant etiological factors for HCC in Taiwan [29]. In this study, no between-group differences were observed between the ratios of cigarette smokers/nonsmokers among controls (40.8:59.2, respectively) and HCC patients (41.6:58.4, respectively), whereas a higher proportion of HCC patients consumed alcohol (37.2%) compared with controls (14.5%). This suggests that alcohol consumption is a risk factor for HCC development. Chronic alcohol consumption promotes hepatobiliary tumors by increasing microRNA-122-controlled HIF-1α activity and stemness [30]. This is supported by findings from a swine model of chronic hypercholesterolemia, in which moderate alcohol consumption altered autophagy- and apoptosis-regulated pathways [31]. Interestingly, the findings indicated that a hypercholesterolemic diet supplemented with vodka appeared to induce pro-apoptotic pathways in liver tissue, whereas wine appeared to induce anti-apoptotic signaling. Our data is consistent with clinical evidence showing that alcohol consumption is a risk factor for HCC [32, 33]; we found that HCC patients who consumed alcohol were at higher risk of worsening disease.

Previous research has found no significant difference in the occurrence of oral squamous cell carcinoma (OSCC) amongst individuals with polymorphisms of the MMP-11 gene in rs738791 [18]. In addition, the patients with rs738791 polymorphism and betel nut chewing increased risk for OSCC when compared to subjects with wild-type genes and without a history of betel nut chewing [34]. In this study, we found that the MMP-11 rs738791 polymorphism was associated with HCC risk. These findings suggest that different MMP-11 polymorphisms play different roles in cancer development. This study found that HCC patients with the MMP1 rs738792 polymorphism had a higher risk of developing Child-Pugh B or C grade. Similarly, the MMP-11 rs28382575 polymorphism was also associated with a higher risk of developing stage III/IV disease, large tumors and lymph node metastasis. It is established that MMP-11 expression controls the miR-125a regulated metastasis of HCC [16]. In addition, CD147 regulated HCC invasion and multidrug resistance through MMP-11 upregulation [35]. More research is required to determine whether an association exists among advanced-stage disease, MMP-11 expression levels, and MMP-11 genotype, and clarification is needed in regard to the effects of the MMP-11 genotype on HCC risk.

In conclusion, the current study suggests a potentially clinically significant finding showing that several variants of the MMP-11 gene are associated with the clinical status and susceptibility of HCC. However, we dose not recruited the survival results of HCC. Future research could evaluate the association of HMGB1 polymorphisms with survival of HCC. We found that individuals carrying the CT+TT allele of the MMP-11 SNP rs738791 were at higher risk of HCC than wild-type (C/C) carriers. Genetic variations in the gene encoding MMP-11 may be a significant predictor of early HCC occurrence and a reliable biomarker for disease progression.

20. Schache M, Baird PN. Assessment of the association of matrix metalloproteinases with myopia, refractive error and ocular biometric measures in an Australian cohort. PloS one. 2012;7:e47181