Background: Alpha-methylacyl-CoA racemase (AMACR) is a key enzyme responsible for the metabolism of branched-chain fatty acids. It has been found to be an important prognostic factor in numerous types of cancers. This study was aimed to investigate the expression of AMACR and its prognostic significance in patients with oral squamous cell carcinoma (SCC).

Methods: Analysis of publicly available microarray data of oral SCC revealed that AMACR was significantly upregulated in tumor tissue compared with normal mucosa. We further assessed the protein expression of AMACR in 164 patients with oral SCC by immunohistochemistry. The prognostic impact of AMACR expression and its association with various clinicopathological parameters were statistically analyzed.

Conclusions: High expression of AMACR was not only a key adverse prognostic factor but also a potential therapeutic target in oral SCC.

Head and neck squamous cell carcinoma (SCC) is one of the most common epithelial malignancies in Taiwan and worldwide. Despite the practice of current standard treatment as surgical resection followed by radiotherapy and/or chemotherapy, local recurrence or distant metastasis occurs shortly in a substantial proportion of patients. In such cases, more intensive therapy or different treatment strategies may be needed. Therefore, it is important to identify new biomarkers to predict prognosis and to perform risk stratification for the selection of high risk patients with early recurrence or metastasis.

Alpha-methylacyl-CoA racemase (AMACR) is an important enzyme involved in the metabolism of branched-chain fatty acids. It is located in mitochondria and peroxisomes and is responsible for converting (2R)-methylacyl-CoA esters to their (2S)-methylacyl-CoA epimers. The transformation to the (S)-stereoisomers is necessary to degrade (2R)-methylacyl-CoA esters by peroxisomal β-oxidation [1, 2]. AMACR was initially identified as an important diagnostic marker for prostate cancer through analysis of high-throughput gene expression profiling data [3, 4]. In prostate adenocarcinoma, AMACR overexpression allowed tumor cells to switch energy sources to β-oxidation of fatty acids and thus promoted cancer progression [5, 6]. High expression of AMACR was also found in a wide variety of other cancers and had prognostic significance [7-11]. However, the prognostic impact and clinicopathological relevance of AMACR expression in oral SCC is unclear.

In our study, we initially analyzed the expression profiles of oral SCC and focused on genes associated with AMACR activity, we found that AMACR was significantly upregulated in cancer tissues compared with normal mucosal tissues. Then, we evaluated the protein expression of AMACR in the cancer tissues of oral SCC patients. The associations between AMACR expression and prognostic parameters, as well as various clinicopathological factors were also analyzed.

From the publicly available GEO database, we downloaded the oral SCC dataset (GSE37991) which includes 40 patients with tumor and non-tumor pair-wise samples [12]. We analyzed the raw data on the Affymetrix HUMAN Genome U133 Plus 2.0 microarray platform and included all sets of probes, trying to find genes associated with tumorigenesis of oral SCC. We performed comparative analysis to find genes that have different expressions between the tumors and non-tumors, particularly focusing on genes related to AMACR activity (GO:0008111). Under the initial analysis of gene expression, those with P<0.01 and log2-transformed expression fold change >0.1 were selected for further analysis. The result was presented as heat map.

This study was approved by Chi-Mei Medical Center Institutional Review Board (IRB 10606-007). Cases diagnosed with oral SCC from Jan. 1998 to Dec. 2002 in Chi Mei Medical Center were recruited. Those who ever received neoadjuvant therapy or had distant metastasis were excluded. Finally, there were 164 patients with available paraffin-embedded tissue blocks included in this study. All of these patients received surgical wide excision for the tumors with neck dissection. The arrangement of postoperative chemotherapy and/or radiotherapy was based on National Comprehensive Cancer Network (NCCN) Clinical Practice Guidelines (https://www.nccn.org/professionals/physician_gls/f_guidelines.asp). The patients were under regular follow-up until their last appointment or death, and the mean follow-up duration was 41.3 months (range, 3-112). The slides were reassessed by two pathologists (T.J.C. & H.L.H.) who was blind to the clinical information. The tumor staging was reappraised by the 7th American Joint of Cancer Committee (AJCC) system.

The tissue samples were fixed with 10% buffered formalin. The paraffin-embedded blocks were cut into tissue sections with 3-µm thickness. The slides were deparaffinized with xylene for 10 mins and rehydrated with a series of graded ethanol. Antigen retrieval was performed using a 10 mM citrate buffer (pH 6) and heated by microwave for 7 min. 3% H2O2 was used for quenching of endogenous peroxidase. The slides were incubated with a primary monoclonal antibody against AMACR (1:350; BIOCARE MEDICAL, Walnut Creek, CA) for one hour and detected by the use of ChemMate EnVision kit (DAKO, K5001, Carpinteria, CA). Then, the slides were incubated with the secondary antibody for 30 minutes, developed with 3,3-diaminobenzidine for 5 minutes, followed by counterstaining with hematoxylin. A prostate adenocarcinoma with high expression of AMACR was selected as a positive control. Rabbit serum IgG for replacement of the primary antibody served as a negative control. Two pathologist (T.J.C. and H.L.H.) who were blind to the clinical data, evaluated the immunostaining. The staining of AMACR was scored by the method of H-score. It was calculated with the following equation: H score = ∑Pi (i+1), where i is the intensity of immunostaining (ranging from 0 to 4), and Pi is the percentage of stained tumor cells of various intensity. High expression of AMACR was defined as the H-score greater than the median value.

The Chi-square test was used to assess the associations between AMACR expression and various clinicopathological parameters. The endpoints, including disease-specific survival (DSS), distant metastasis-free survival (DMFS), and local recurrence-free survival (LRFS), were calculated from the starting date of operation to the date of event developed. Kaplan-Meier survival analysis was used to compare survival times based on AMACR expression in oral SCC patients. The log-rank test was performed to generate P values. We used univariate and multivariate analyses to evaluate the influences of AMACR expression and various clinicopathological parameters on survival. Multivariate analysis was performed using the Cox regression model. For all analyses, the P value < 0.05 was considered significant under two-sided tests. All statistical analyses were performed using SPSS 14 software package (SPSS Inc., Chicago, IL, USA).

Through analysis of the publicly available transcriptome of oral SCC, we searched for genes relating to the regulation of AMACR activity and exhibiting significantly different expression between tumor tissue and paired normal mucosal tissue. AMACR was identified as the only one significantly upregulated gene in the tumor tissue compared to normal mucosal tissue, with high statistical power (P=0.0001 and 0.0005, respectively) and matching log2-transformed expression fold (log2 ratio=0.6881 and 0.5101, respectively) to the selection criteria (Figure 1, Table 1).

Immunohistochemical result and the associations between AMACR expression and clinicopathological factors

As shown in the Figure 2, the immunoreactivity of AMACR was localized mainly in the cytoplasm. The staining of AMACR was more prominent in tumor tissue than in matched normal mucosa. The H-score ranged from 100 to 290 with a median of 190. Furthermore, statistical analysis showed that high expression of AMAMCR was significantly associated with advanced tumor status (P=0.001), advanced nodal status (P=0.036), increased vascular invasion (P=0.026) and increased perineural invasion (P=0.004). There was no significant correlation between AMACR expression and gender, age, extracapsular extension of metastatic nodes, histological grade, tumor necrosis, carcinoma in situ at adjacent mucosa and surgical margin status in this cohort (Table 2).

In this study, analysis of the relationships between AMACR expression and numerous clinicopathological features showed that high expression of AMACR was significantly associated with an advanced disease status, increased vascular invasion and increased perineural invasion. Moreover, AMACR overexpression also acted as a negative prognostic factor for DSS, DMFS and LRFS. These findings indicated that AMACR may play an important role in tumor invasiveness and progression in oral SCC. Understanding the underlying mechanism may aid in developing adjunctive effective treatment for patients with advanced disease status.

Analysis of gene expression microarray data from a publicly available transcriptome of oral SCC (GSE37991) in GEO database. Through comparative analysis to find genes that have different expressions between the tumors and non-tumors, particularly focusing on genes related to AMACR activity, AMACR was identified as the significantly upregulated gene in tumor tissue compared to normal mucosa. The expression levels are demonstrated as a spectrum of brightness of red and green for the upregulated and downregulated genes, respectively. 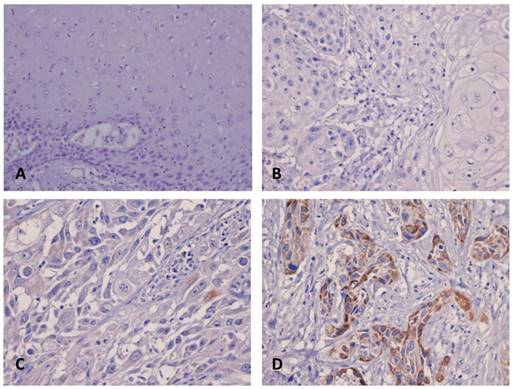 AMACR is a key enzyme responsible for the chiral inversion step in the metabolism of branched-chain fatty acids and regulates the entry of branched-chain fatty acids into β-oxidation pathway in peroxisome and mitochondria [1, 2]. AMACR expression was commonly found in prostate cancer tissue and was a key diagnostic marker [4]. Mounting evidences have suggested that high expression of AMACR represents as an adverse prognostic factor in a wide variety of cancers, such as gastric adenocarcinoma, hepatocellular carcinoma, gallbladder carcinoma, nasopharyngeal carcinoma, gastrointestinal stromal tumor and myxofibrosarcoma [8-11, 13, 14]. Similar finding was also found in our study that there was a link between AMACR overexpression and poor patients' outcomes in oral SCC. Taken together, AMACR might be an important factor involved in the process of cancer progression.

Although the underlying mechanism about the role of AMACR in cancer progression remains unclear, there was evidence suggesting that there is a relationship between AMACR expression and cancer cell behavior. Suppressing the expression of AMACR by siRNA significantly reduced proliferation of the androgen-responsive prostate cancer cell line LAPC-4 [15]. Moreover, in most cancers, energy requirement was dramatically increased for rapid cell proliferation. In prostate cancer cells, overexpression of AMACR allowed switching the energy supply to fatty acid β-oxidation rather than glycolysis [5]. This dominant bioenergetic pathway of fatty acid metabolism might account for the influence of AMACR expression on cancer cell behavior.

AMACR has been identified as a drug target for prostate cancer in an androgen-independent manner. The high-throughput drug-screening study conducted by Wilson et al. revealed that two compounds elselen and ebselen oxide are selective covalent inhibitor of prostate cells (LAPC4/LNCaP/PC3) that have AMACR expression. There was no significant effect of these two compounds on normal prostate fibroblast cell line (WPMY1) that have no expression of AMACR [16]. Covalent inhibition meant that these compounds exhibited time-dependent inactivation which cannot be reversed by dialysis [17]. In addition to these covalent inhibitors of AMACR, 2-trifluoromethyltetradecanoyl-CoA and E-13-iodo-2-methylenetridec-12-enoyl-CoA were competitive inhibitors [18]. Moreover, some evidences suggested that ibuprofen and other non-steroidal anti-inflammatory drugs (NSAIDs) had chemo-preventive or chemotherapeutic effect on prostate cancer or colon cancer [19-21]. These protective effects might be exerted by inhibition of AMACR. The assumption was supported by some studies as those who had the 9V and 175G SNPs of AMACR were protected against prostate cancer under the regular use of ibuprofen [22]. Additionally, high expression of AMACR was also found in some colon cancers and it had similar protective effect of ibuprofen [21]. Little is known about the effects of these AMACR inhibitors in oral SCC. More basic researches are needed to evaluate the inhibitory effect of these compounds in oral SCC with AMACR overexpression and to provide a personalized therapeutic strategy.

In conclusion, our result revealed that high expression of AMACR was significantly associated with an aggressive phenotype with advanced tumor staging, increased vascular invasion and increased perineural invasion in oral SCC. More importantly, AMACR overexpression also significantly correlated with worse clinical outcomes. In oral SCC, AMACR expression was not only an adverse prognostic factor but a potential target for therapeutic application.