Islet adaptation to insufficient insulin involves compensatory changes in not only beta cells, but also in pancreatic alpha cells [2] [3]. Alpha cells are markedly increased in conditions of lack of beta cells such as injury to beta cells and patients with recent-onset type 1 diabetes [4, 5], and also in the condition of insulin resistance as a result of high fat diet-induced obesity [6, 7]. As a result, increased glucagon secretion is an accompanying phenomenon in type 2 diabetes [3, 6, 8]. However, it is not clear yet the reasons for compensatory increase of pancreatic alpha cells.

In addition to its classical role as a promoter of gluconeogenesis and glycogenolysis, glucagon, as well as GLP-1, are known to be stimulators of insulin release in beta cell lines and pancreatic islets [15-17]. Binding of glucagon to the glucagon receptor activates adenylyl cyclase and generates cAMP, followed by activation IP3 and increase of calcium, contributing to various biological effects such as gluconeogenesis in liver hepatocytes [18]. Upon GLP-1 receptor activation, adenylyl cyclase is activated and cAMP generated, leading, in turn, to cAMP-dependent activation of second messenger pathways, such as the PKA and Epac pathways, contributing to insulin release in beta cells [9].

C57BL/6 mice were obtained from the Korea Research Institute of Bioscience and Biotechnology (Daejeon, Korea) and were maintained at a facility at Gachon University. Male C57BL/6 mice (4 weeks old) were fed a high fat diet (HFD; 60% kcal from fat) for 8 weeks. All animal experiments were carried out under a protocol approved by the Institutional Animal Care and Use committee at Lee Gil Ya Cancer and Diabetes Institute, Gachon University.

To investigate the level of glucagon in serum, non-fasting blood samples were obtained from C57BL/6 mice at 8 weeks after HFD feeding prior to sacrifice. We measured the concentration of serum glucagon with a Mercodia glucagon ELISA kit (Mercodia AB, Sweden).

INS-1 cells were seeded at a density of 2 × 105/well in 24-well plates with 11 mM glucose RPMI medium. After 24 h, the medium was changed to 5 mM glucose RPMI media and then 24 h later, the medium was changed to 0.2 mM Krebs Ringer Buffer (KRB). After 2 h, the cells were stimulated with 3 mM or 17 mM glucose with or without glucagon, Ex-4, or both for 2 h. At the end of the stimulation, the amount of secreted insulin was quantified using a rat insulin EIA kit (Alpco Diagnostics, Windham, NH, USA) according to the manufacturer's method.

INS-1 cells were seeded at a density of 1 × 106/well in 6-well plates in 11 mM glucose RPMI medium and cultured. After 24 h, the medium was changed to 17 mM glucose RPMI and then Ex-4 or glucagon was added for 15 min. The medium was removed, and the cells were lysed by incubation with 1 ml of 0.1 M HCl for 20 min at room temperature. The lysate was centrifuged at 3,000 rpm for 5 min to separate the cellular debris, and the supernatant was used for determination of cAMP concentration using a cAMP ELISA kit (Enzo Life Sciences, Farmingdale, NY, USA).

All experiments were conducted with a minimum of three different samples, and data are presented as the mean ± SD. Statistical analysis was performed using an unpaired parametric Student's t-test for two groups or ANOVA followed by Fisher's protected least significant difference test for multiple groups. P<0.05 was accepted as significant.

To investigate whether alpha cells are increased in a condition of insulin resistance, we analyzed pancreatic tissues and serum glucagon levels in mice fed a HFD for 8 weeks. The area of islets, beta cell area per islet and alpha cell area per islet were significantly increased in HFD-induced obesity mice (Fig. 1A-E). Serum glucagon levels were significantly increased in HFD-induced obese mice compared with mice fed a normal diet (Fig. 1F). These results suggest that islet adaptation to conditions that would induce insulin resistance increased the alpha cell area and glucagon secretion in vivo.

Alpha cells and glucagon secretion were increased in HFD-induced obese mice. C57BL/6 mice were fed a HFD or normal diet (ND) for 8 weeks. Pancreatic tissues and serum were harvested. Pancreatic sections from (A) ND-fed mice or (B) HFD-fed mice were double-stained with anti-glucagon and anti-insulin antibodies. The area of (C) the islets, (D) beta cells per islet, and (E) alpha cells per islet was measured. (F) The concentration of glucagon in the serum was determined by a glucagon ELISA kit. N=7~10 mice and 54-57 islets. Data are means ± SD, *P<0.05 compared with the ND group. 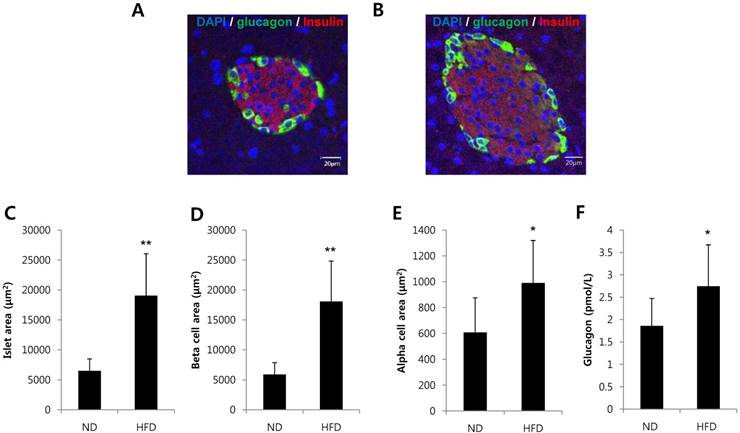 Glucagon and Ex-4 dose dependently increased glucose-induced insulin secretion in INS-1 cells. INS-1 cells were incubated in media with 11 mM glucose for 24 h, 5 mM glucose for 12 h, and in KRB for 2 h. Cells were then treated with the indicated concentrations of (A) glucagon or (B) Ex-4 in 3 mM or 17 mM glucose KRB for 2 h. Insulin levels in the media were measured with an insulin EIA kit. Results are representative of 3 independent experiments. Data are means ± SD, *P<0.05, **P<0.001 compared with the untreated group. 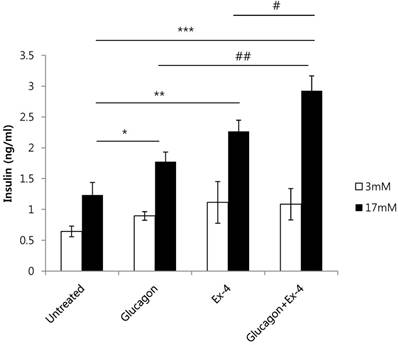 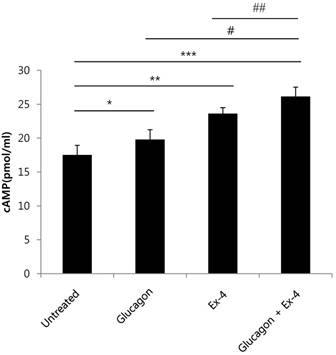 cAMP and its signaling pathways are important for the actions of glucagon and GLP-1[19] [20]. Therefore, we measured cAMP production in INS-1 cells treated with glucagon, Ex-4, or both. cAMP production was significantly increased in glucagon or Ex-4-treated INS-1 cells compared with untreated INS-1 cells in the presence of 17 mM glucose. Co-treatment with glucagon and Ex-4 additively and significantly augmented cAMP levels over either treatment alone (Fig. 4).

HFD-fed mice are associated with insulin resistance and hyperglucagonemia [23, 24]. Pancreatic alpha cells are normally about 15-20 % of the islet mass, but they are increased in conditions of insulin insufficiency or insulin resistance [4, 7, 25]. Their primary role is to secrete glucagon. GLP-1 is also secreted from alpha cells, as well as from intestinal L-cells, and GLP-1 secretion from alpha cells is particularly increased in the presence of high glucose or in damaged islets [25, 26]. Glucagon mainly regulates hepatic glucose production to maintain glucose homeostasis [27], and hyperglucagonemia contributes to increased glucose production and hyperglycemia caused by beta cell failure [28, 29]. GLP-1, is an important insulin secretagogue, and increases beta-cell proliferation and insulin biosynthesis. Both glucagon and GLP-1 are also known to be stimulators of insulin release in beta cell lines and pancreatic islets [15-17], and both glucagon and GLP-1 receptors are expressed in human islets [30] and use cAMP signaling pathways [31, 32]. However, it is not clear whether these hormones, which are both produced from alpha cells, can additively or synergistically stimulate glucose-induced insulin secretion and which adenylyl cyclase is involved. In this study, we found that co-treatment of glucagon and GLP-1 additively potentiates insulin secretion in the presence of high glucose, but not low glucose, in INS-1 cells.

Next, we investigated the downstream mechanisms of this additive effect. GLP-1 and glucagon have distinct receptors, specific G protein-coupled receptors that contain seven transmembrane domains [16, 33] and mediate cAMP production [31, 32]. Adenylyl cyclases catalyze the conversion of ATP to cAMP [19]. In mammals, the family of adenylyl cyclases includes at least ten isozymes which fall into two classes of adenylyl cyclase: tmACs and sACs [21]. TmACs are at the plasma membrane and receive extracellular signals through the G-protein-coupled receptors. sACs are ubiquitously expressed and reside in specific subcellular compartments throughout the cell [34]. Mammalian sAC activity is stimulated by bicarbonate [35], Ca2+ and cellular ATP levels [36], but is insensitive to G protein or forskolin [37]. Calcium-sensitive adenylyl cyclase 8 (ADCY8, one of the tmACs) plays a central role for cAMP-induced amplification of exocytosis in GLP-1 signaling [38]. Although adenylyl cyclases are required for glucagon signaling [39], isozymes of adenylyl cyclases have not been identified as mediator of glucagon-induced insulin secretion.

In summary, we investigated the effect of co-stimulation of GLP-1 and glucagon in beta-cells and found that co-treatment of Ex-4 and glucagon additively increased insulin secretion in high glucose conditions via distinct adenylyl cyclases. In addition, these results support previous findings that pancreatic alpha cells undergo compensatory changes (hyperplasia) during the development of insulin insufficiency or insulin resistance to increase the production of glucagon and GLP-1, which may contribute to reducing hyperglycemia by increasing insulin secretion.

We thank Dr. Ann Kyle for editorial assistance. This research was supported by a grant of Basic Science Research Program through the National Research Foundation of Korea (NRF) funded by the Ministry of Education (2015R1D1A1A01060232) and by a grant from the Korea Health Technology R&D Project through the Korea Health Industry Development Institute (KHIDI), funded by the Ministry of Health & Welfare, Republic of Korea (grant number: HI14C1135).

6. Ahren B. Glucagon secretion in relation to insulin sensitivity in healthy subjects. Diabetologia. 2006;49:117-22

25. Thyssen S, Arany E, Hill DJ. Ontogeny of regeneration of beta-cells in the neonatal rat after treatment with streptozotocin. Endocrinology. 2006;147:2346-56