Conclusion: LPS mediates intercellular tight junction destruction among TECs and RhoT1/SMAD-4/JAM-3 is a pivotal pathway to mediate the phenomenon.

Sepsis is one of the most crucial diseases in hospitalized patients which remains the primary cause of in-hospital mortality. More than 60% of sepsis diagnoses are attributed to adults 65 years of age and older [1]. Kidney is the most vulnerable organ during sepsis while the morbidity of sepsis induced acute kidney injury (S-AKI) remains unacceptably high among septic patients, especially in the ICU [2]. However, to date, except avoidance of fluid volume deficit and nephrotoxic agents may reduce the incidence of S-AKI, there is no effective therapy that may be able to prevent tissue injury and alter the outcome of S-AKI. Moreover, it has been shown that more than half of patients with S-AKI progressed to chronic kidney disease (CKD), even to end stage renal disease (ESRD) especially in patients with CKD [3,4]. Therefore, understandingthe mechanisms that lead to AKI during sepsis become extremely important. To date, Studies have confirmed that inflammation plays the pivotal role in the occurrence of AKI [5,6] and that tubular backleak is one of the major phenomenon in kidney disease [7,8]. However, the exact mechanisms of tubular backleak during S-AKI remain unclear.

Gram-negative bacteria are the most common cause of sepsis while Lipopolysaccharide (LPS) plays the key role in this type of sepsis. Interacting of LPS with kinds of cells by different receptors such as TLR4 will cause cell and organ dysfunction which become one of the major mechanisms of sepsis induced organ failure [9,10]. Renal tubular epithelial cell (TEC) is one of most important inherent cells in kidney for maintainenance of normal renal function. The intercellular tight junction between TECs is of a pivotal factor in maintaining the integrity and function of renal tubules. Junctional adhesion molecule 3 (JAM-3) is a member of an immunoglobulin subfamily containing JAM-1, JAM-2, JAM-3, JAM-4, ESAM and CAR which is unique in terms of its broad expression and function [11], especially in maintaining the intercellular tight junction integrity [12,13]. JAM-3 is expressed by TECs and acts as the key role in the tight junction among the cells. Because the function of renal tubules decreases significantly, and tubular permeability increases remarkably during S-AKI, it is important to find out whether LPS stimulation could damage the tight junction among TECs by decreasing JAM-3 expression and associated mechanisms.

Here in our present study, we hypothesized that LPS could damage the tight junction among TECs by downregulating the expression of JAM-3. We examined our hypothesis in an in vitro system and studied relevant mechanisms.

HK-2 cells were cultured in Transwell Plates (0.4μm pore, Corning) until they achieved complete confluence. In LPS group, confluent monolayers of HK-2 cells were treated with LPS at the concentration of 0.5μg/ml and in the control group the HK-2 monolayers were cultured in the same medium without LPS. Transepithelial Electrical Resistance Assays were carried out with the Epithelial Volt/Ohmmeter (World Precision Instruments) and the resistance was presented in ohms divided by surface area (1.13cm2, Ω/cm2).

An immunofluorescence Assay was carried out as previously described. Briefly, the cell climbing films were fixed in 4% paraformaldehyde with 0.1% Triton X-100 for 30 min at 4℃. Subsequently, the films were incubated with the primary antibodies (SMAD-4 rabbit polyclonal antibody, 1:200 (GeneTex), RhoT1 rabbit monoclonal antibody, 1:100 (ProSci)) overnight at 4℃. The specimens were incubated with the selected secondary antibodies (FITC-conjugated goat anti-rabbit IgG antibody and TRITC-conjugated goat anti-rabbit IgG antibody) for 90 min in the dark. Hoechst 33342 was used to counterstain the nuclei. Microscopic images were taken and recorded by fluorescence microscopy or laser confocal microscopy (Olympus).

Quantitative data were presented as the mean±SDs and Statistical analysis was performed using Graphpad Prism 6. Statistically significant differences in the mean values were assessed using Student's t-test or one-way analysis of variance with Tukey's multiple comparisons test for multiple comparisons. A P-value <0.05 was considered statistically significant.

Effect of LPS on the intercellular tight junctions among TECs

To investigate whether LPS stimulation can affect the intercellular tight junctions among TECs, we first examined the effects of LPS on the permeability of monolayer TECs (MLTECs) by preforming Transepithelial Permeability Assay with FITC-labeled Albumin. It can be demonstrated from the results that after an 8 hour treatment of LPS, the permeability of MLTECs increased significantly and continued to increase in a time dependent manner (Fig. 1A/B). Moreover, to further confirmour results, we also carried out Transepithelial Electrical Resistance (TEER) detection. As shown in figure 1, after an 8 hours LPS stimulation, the TEER level of the LPS group decreased significantly compared to the control and continue to decrease in a time dependent manner (Fig. 1C). All the results above demonstrated that LPS stimulation can disrupt the intercellular junctions among TECs. 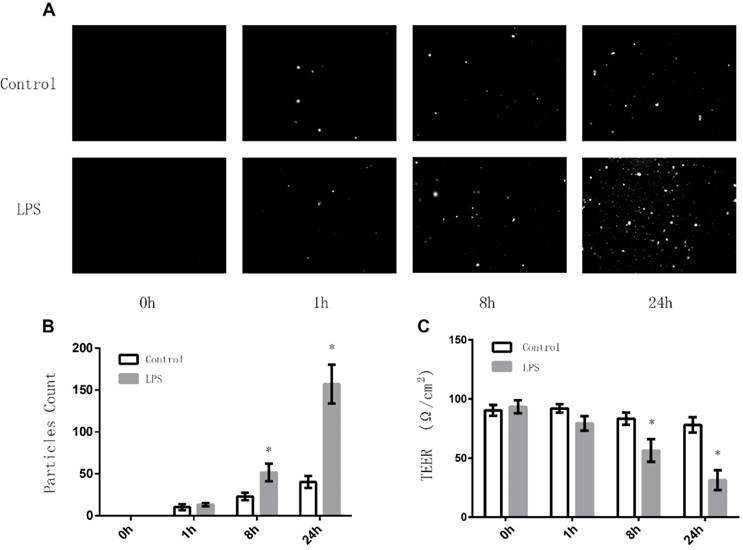 Effects of LPS on the expression of JAM-3 in TECs

SMAD-4 has been identified as a pivotal factor in the TGF-β pathway and has been shown to be upregulated in TECs in a variety of pathogenic processes including inflammation. We further investigated whether SMAD-4 was involved in the JAM-3 downregulation progress induced by LPS stimulation. It can be demonstrated from the immunofluorescent results that when stimulated with LPS (0.5ug/ml, 8 hours), the expression of SMAD-4 in TECs increased significantly and SMAD-4 was translocated into the nuclei (Fig. 3A, Fig. 3B). Furthermore, with Western Blot analysis, it can be demonstrated from the results that the expression of JAM-3 was significantly increased while the expression of SMAD-4 was downregulated by SMAD-4 SiRNA in TECs, and the JAM-3 down-regulation mediated by LPS stimulation was significantly reduced in the TECs transfected with SMAD-4 SiRNA (Fig. 3C). The results above demonstrated that SMAD-4 was a principal factor which mediated LPS induced JAM-3 downregulation in TECs.

Effects of LPS on the expression of RhoT1 in TECs 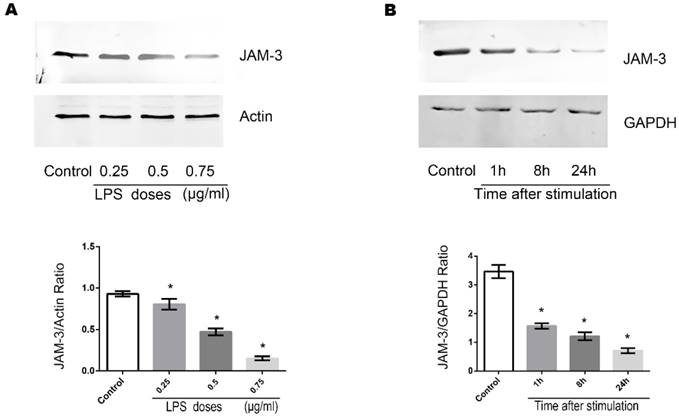 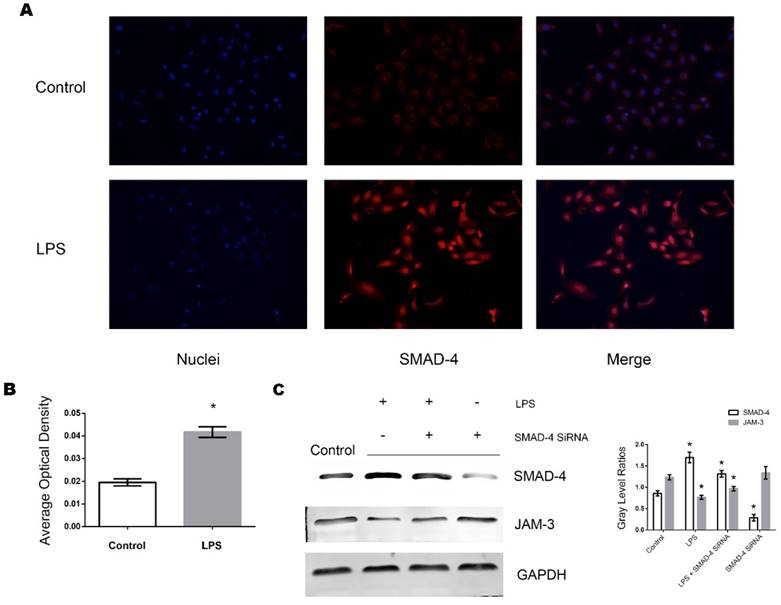 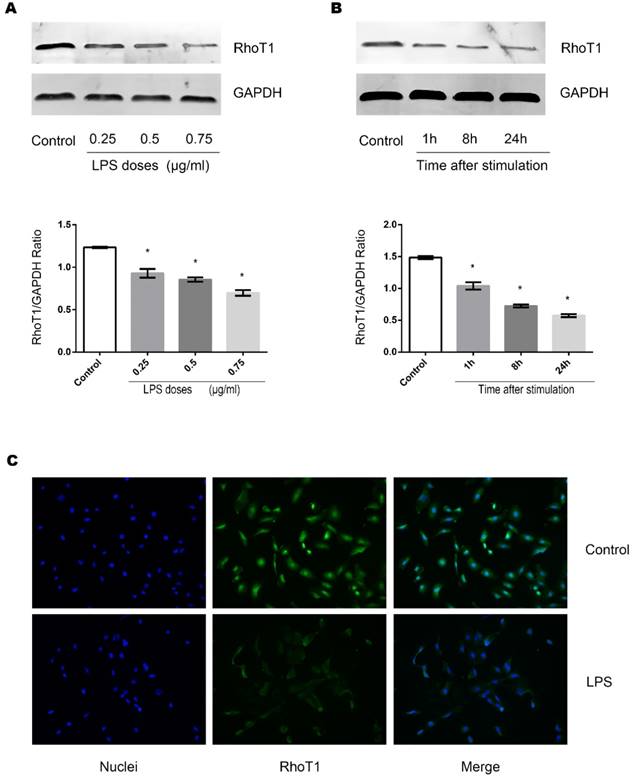 S-AKI is a pivotal syndrome in ICU patients with poor prognosis and few treatment or prevention. It is crucial to explore the exact pathogenesis of S-AKI in order to discover further effective treatments for S-AKI. Previous studies indicated that urine backleak was commonly observed during AKI which acted as an important mechanism of that disease [14]. Furthermore, studies have indicated that when stimulated with the serum of sepsis patients, ZO-1 a crucial protein associated with intercellular tight junction decreased significantly [15]. Here in our present in vitro study, it was verified that when treated with LPS, albumin permeability of the MLTECs was increased remarkably and the TEER of MLTECs decreased significantly. Our results indicated that the intercellular tight junction between TECs was damaged by the stimulation of LPS. Our findings were consistent with previous studies and illustrated that LPS, the key factor in sepsis, can mediate the destruction of intercellular tight junction of TECs directly in vitro. We have then studied the possible molecular mechanisms that lead to this phenomenon.

JAM-3 is one of the key proteins which maintain the intercellular junctions among epitheliums and between epithelial cell and other types of cells [12,16]. The extracellular domains of JMA-3 interact with homophilic domains and also with integrins such as αMβ2, αXβ2 and αVβ3 [17]. Lamagra et al. demonstrated that JAM-3/JAM-2 binding was stronger than JAM-3 homophilic binding [18] and under oxidative stress, JAM-C is critically required for the survival of human cells [19]. Previous studies had also indicated that JAM-3 was expressed by epithelial cells and maintains the intercellular tight junction among them. However, there is few studies focus on the expression of JAM-3 in TECs during sepsis or TECs that are stimulated with LPS. Here in our present study, it has been found out that JAM-3 was expressed by TECs and the expressions were decreased significantly in both time dependent manner and dose dependent manner as stimulated with LPS. Our present results indicated that the LPS stimulation can down regulate the expression of JAM-3 in TECs to destruct the intercellular tight junction among the cells. 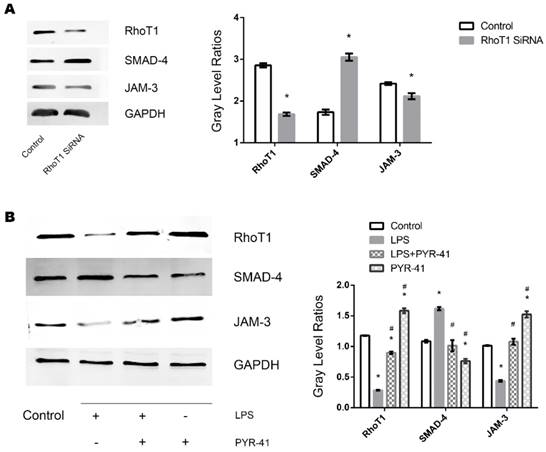 It is widely reconiged that SMAD-4 is a common SMADs molecule that plays a critical role in the signal transduction pathway of TGF-β by transducing SMAD-dependent signaling into nucleus. SMAD-4 regulates expressions of varies proteins as a nuclear transcription factor [20-22]. Previous studies indicated that SMAD-4 acts as a pivotal role in regulating the expression of molecules associated with intercellular junctions Previous studies also indicated that increasing SMAD-4 expression will result in downregulation of claudin-1 which is a crucial molecule in intercellular tight junction [23]. Here in our present study, it can be demonstrated from the results that when stimulated with LPS, the expression of SMAD-4 in TECs increased remarkably and SMAD-4 was transferred into nucleus. Moreover, with RNA interference technique, it was found out that the inhibition of SMAD-4 can significantly antagonize the down-regulation of JAM-3 in TECs induced by LPS. The results of our present study confirmed that SMAD-4 is an important molecule in the regulation of JAM-3 expression in TECs with LPS regulating JAM-3 expression through SMAD-4.

RhoT1 is an important regulatory protein which is expressed in various cells including TECs. Previous researches have indicated that RhoT1 plays a crucial role in maintaining the stability of mitochondria and regulating the distribution of mitochondria in cells [24,25]. Moreover, some studies also pointed out that RhoT1 could alter cell metabolism by regulating the transcriptions of various types of mRNA via SMAD-4 associated pathways [26]. RhoT1 is degraded by ubiquitin proteasome pathway in the cell, and its intracellular concentration is closely related to its synthesis level and the activation of ubiquitination pathway. Within our present study, it can be found out from the results that the expression of RhoT1 decreased significantly in TECs stimulated with LPS in both time and dose dependent manners. Furthermore, while inhibiting the expression of RhoT1 with RNA interference, SMAD-4 level was upregulated, and JAM-3 level was downregulated in TECs. This phenomenon is very similar with the changes of SMAD-4 and JAM-3 after LPS stimulation. For further inspection, we measured the expression of RhoT1 after LPS stimulation and the ubiquitin E1 inhibitor PYR-41 was used to inhibit the degradation of RhoT1. It was indicated from the results that the downregulation of RhoT1 was accompanied with remarkable upregulation of SMAD-4 and downregulation of JAM-3, and reducing the degradation of RhoT1 with PYR-41 reversed the process described above. Moreover, as RhoT1 level increased, the expression of SMAD-4 decreased remarkably in TECs treated with PYR-41. Our results confirmed that RhoT1 is an important upstream regulatory molecule that regulates the expression of SMAD-4, and its expression level played an upstream regulatory role in LPS-stimulated intercellular tight junction disruption.

We have recently found out in our previous researches that TECs actively participated the inflammatory storm during sepsis and that is a noble cause of the pathogenesis of S-AKI [6]. Here in our present study, we further discovered that LPS would directly induce intercellular tight junction destruction through RhoT1/SMAD-4/JAM-3 pathway when interacting with TECs. Although there may be other mechanisms that mediated the destruction of intercellular tight junction among TECs during sepsis, our study presented a noble mechanism leading to urine backleak and S-AKI. However, the present study has its limitations since it is an in vitro study. An in vivo study is required to further verify our results and to identify effective treatments for this pathogenic process.

In summary, the results presented here revealed that LPS can directly mediate intercellular tight junction destruction among TECs via the RhoT1/SMAD-4/JAM-3 pathway. S-AKI is a progressive clinical syndrome whose mechanism is poorly understood. It is also an independent risk factor for death among ICU patients. Our findings may provide a better understanding of the mechanisms of S-AKI and a basis for new treatment strategies.

8. Singh P, Okusa MD. The role of tubuloglomerular feedback in the pathogenesis of acute kidney injury. Contributions to Nephrology. 2011:12-21