End-stage renal disease (ESRD) patients requiring dialysis are at high risk for cardiovascular diseases [1], and cardiovascular disease is the major cause of death [2]. This is because the vascular system undergoes major structural and functional changes when renal function declines and dialysis is required [3]. Vascular calcification (VC) is a morphological marker of vascular pathologic changes [4], and an independent risk factor for deaths and cardiovascular events (CVEs) in ESRD patients [5-7]. VC is associated with arterial stiffness and functional and structural alterations in the heart, decreased coronary perfusion, and impaired renal and brain microcirculation [8, 9].

Left ventricular hypertrophy (LVH) is defined as an increase in left ventricular mass (LVM) consequent to increased wall thickness and it is a representative marker of cardiac structural pathology in ESRD patients. Multiple factors associated with decline in renal function increase the risk of LVH, including anemia, hypertension, hypervolemia, and disorders of mineral metabolism [2]. LVH has significant clinical significance since it is associated with adverse outcomes in dialysis patients. Previous reports showed that LVH and increase in LVM are associated with deaths and CVEs in dialysis patients [10-13].

There are few data on the interplay between VC and LVH in dialysis patients, while the vascular system and heart are tightly coupled. The study hypothesis was that VC is independently associated with LVH in hemodialysis (HD) patients, and that patients with both VC and LVH would have the highest risk for deaths and CVEs compared with those with VC or LVH alone.

We included ESRD patients who had received more than 1 month of HD treatment at Daejeon St. Mary's Hospital from February 2004 to November 2014. We included patients who were examined with plain chest radiographs for aortic arch VC and echocardiography for LVH. Subjects with the following criteria were excluded to avoid potential bias related to primary or secondary endpoint: current treatment for active infection, major surgery, overt signs of hemorrhage, acute heart failure, acute myocardial infarction, acute cerebral stroke, or an incomplete medical record. In total, 341 patients were enrolled. The sample was classified according to the presence or absence of VC, and each group was subdivided into two groups depending on the presence or absence of LVH.

Pre-HD systolic and diastolic blood pressure (SBP and DBP) were calculated for each patient from the mean value for 1 month of HD treatment.

Relationship between VC and LVH

Composite of deaths or CVEs

Cumulative rates of composite of deaths or CVEs according to the presence of VC and LVH. The cumulative event rate was highest in patients with both VC and LVH. CVE, cardiovascular event; LVH, left ventricular hypertrophy; VC, vascular calcification. 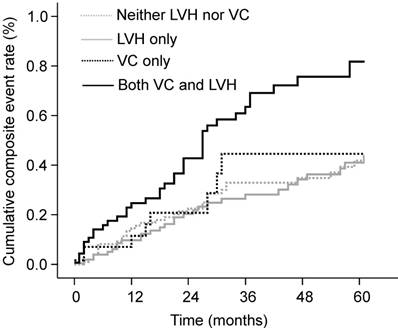 Baseline demographic and laboratory data of the study population

Comparison of echocardiographic measurements based on the status of VC

Early-onset LVH is one of the most characteristic and prominent cardiac changes among patients with chronic kidney disease [3], which was associated with deaths and CVEs [10-13]. In ESRD patients, LVH is a multifactorial complication, caused by anemia, hypertension, hypervolemia, and disorders of mineral metabolism [2]. Our results were consistent with those showing that anemia and higher pre-HD SBP and ultrafiltration volume are independently associated with LVH and extended those findings by showing that LVH is more prevalent in patients with VC than in those without VC, and that VC is an independent determinant of LVH. These findings implicate the importance of VC for the development of LVH in HD patients.

In ESRD patients, both the intima and media thickness increase and VC occurs in the two areas of the vessel wall [3]. The inappropriate VC causes arterial fibroelastic thickening and loss of elastic fiber, which increases arterial stiffness and elevated pulse pressure [19-21]. Aortic stiffening associated with VC also increases cardiac afterload and arterial circumferential stress. Unfortunately, all of these structural and functional changes in vasculature promote LVH [9]. In addition, arterial dysfunction and LVH lead to increased filling pressure and limited diastolic filling, which leads to left ventricular (LV) diastolic stiffness [22]. Our results showed not only that VC is closely associated with LVH, but also that patients with VC had higher LAD and E/E′ ratio compared with those without VC. Therefore, we suggest that pathologic alterations in the arterial wall provide the background for the interaction of VC with LVH and diastolic dysfunction, and support the concept of vascular-ventricular coupling in HD patients [6, 7, 23].

Logistic regression on the determinant factors of LVH

In this study, neither the presence of VC without LVH nor the presence of LVH without VC was associated with mortality or CVEs. However, the coexistence of VC and LVH was an independent predictor for CVEs and composite of deaths or CVEs. These findings suggest that LVH may further affect HD patients with VC toward adverse outcomes. Since LVH causes limited diastolic LV filling and thereby reduces LV stroke volume [3, 22], LVH contributes to systolic LV dysfunction and heart failure. Accordingly, LVH increases the risk of ischemic injuries on the heart, brain, and peripheral arteries, and this was enhanced when VC or associated vascular dysfunction involved these organs [24]. Therefore, we suggest that the combined effect of VC and LVH on CVE risk should be considered to optimize the care of HD patients.

A synergistic interaction was found between VC and LVH on the risk of composite events. This finding suggests that VC and LVH exacerbate each other and there is a longitudinal relationship between VC and LVH in HD patients. VC alters the pulsatile dynamics in vasculature and consequently contributes to an increase in LV load and LVH [25]. LVH may also induce or aggravate VC in HD patients. HD patients with ultrafiltration results in systemic hemodynamic perturbation and myocardial perfusion impairment and are prone to falling in intradialytic hypotension [26, 27]. These episodes increase gut ischemia and lead to endotoxemia from the gut [28]. It has been shown that HD-induced systemic circulatory stress and recurrent regional ischemia result in increased endotoxin translocation from the gut and cause endotoxemia, and that this is related to markers of inflammation, malnutrition, cardiac injury, and reduced survival [29]. We speculate that patients with LVH may have greater circulatory stress during HD and consequently greater endotoxemia and more severe inflammation, all of which would contribute to VC, compared with those without LVH. In addition, endothelial biology is impaired in patients with LVH [30-32]. Given the close proximity of endothelial and smooth muscle cells in blood vessels, dysfunctional endothelial cells cause the development and progression of VC through the modulation of smooth muscle cells [33, 34].

This study has some limitations. First, this was a single center study with a retrospective design. Second, VC was measured qualitatively using plain radiographs instead of computed tomography. Third, the pathophysiological mechanism of the interplay between VC and LVH was not proven.

VC was closely associated with LVH in HD patients and the coexistence of VC and LVH exposed patients to the highest risk of deaths and CVEs. In addition, there was a synergistic interaction between VC and LVH on adverse outcomes. Screenings and interventions for preventing or ameliorating VC or LVH are needed for ESRD patients at dialysis initiation. In patients with both VC and LVH, intensive management strategies should be continued to prevent future CVEs.

Since this study was a retrospective one using clinical data, and it did not involve further invasive intervention, treatment, or costs to patients, the study received a consent exemption and it was approved by the Institutional Review Board of Daejeon St. Mary's Hospital (XC15RIMI0073O). The patient's record was de-identified and analyzed anonymously. This study was performed in accordance with the Declaration of Helsinki.

14. Sahn DJ, DeMaria A, Kisslo J, Weyman A. Recommendations regarding quantitation in M-mode echocardiography: results of a survey of echocardiographic measurements. Circulation. 1978;58:1072-83