Rheumatoid arthritis (RA) is a systemic inflammatory disease that causes chronic inflammation of the joints. Analysis of genetic variants offers promise for guiding treatment and improving outcomes in RA. High-mobility group box protein 1 (HMGB1) is a ubiquitous nuclear protein found in all mammal eukaryotic cells that participates in several biological functions including immune response, cell survival and apoptosis. We investigated the effects of HMGB1 gene polymorphisms on the risk of RA disease progression in a cohort of Chinese Han individuals. Four single nucleotide polymorphisms (SNPs) from the HMGB1 gene were selected and genotyped in 232 patients with RA and 353 healthy controls. We found that having one C allele in rs1360485 and one G allele in rs2249825 polymorphisms lowered the risk of RA in females. Moreover, among healthy controls, those who bore the C/G/T haplotype at SNPs rs1360485, rs2249825 and rs1412125 were at reduced risk of developing RA by 0.13-fold (p <0.05). This is the first report to examine the risk factors associated with HMGB1 SNPs in the development of RA disease in the Chinese Han population.

Rheumatoid arthritis (RA) is a systemic autoimmune disease characterized by chronic inflammation and joint deformation, affecting an estimated 0.3% to 1.0% of the adult population worldwide who, if left untreated, will suffer severe disability and premature mortality [1]. Common features of RA include monocyte infiltration, inflammation, synovial swelling, pannus formation, stiffness in the joints and articular cartilage destruction [2]. The etiology of RA remains unclear. However, considerable clinical data indicate that genetic factors act as markers and contribute to the development of this disease [3]. Indeed, genetic factors may be responsible for up to 60% of overall susceptibility to RA [3]. We sought to define genetic aberrations in RA, as these may lead to a better understanding of risk prediction and guide drug discovery that may lead to a more personalized approach to treatment.

Knowing how an individual's genetic make-up regulates disease predisposition and outcome can help us better understand aspects of disease biology and facilitate diagnosis, understand the importance of tailoring treatment to the patient, and, eventually, enable a cure or the opportunity to prevent the disease. Genetic analyses of RA pathogenesis demonstrate considerable heterogeneity among individuals and populations [4, 5]. Global genome-wide association studies (GWASs) involving large patient cohorts and typically using many hundreds of thousands of single nucleotide polymorphisms (SNPs) have contributed much understanding to RA etiology [6]. These GWASs have identified a number of RA-susceptibility loci, although such studies cannot directly identify the genes or genetic variants causing the disease [6]. Previous research has found that specific SNPs in GWAS-identified susceptibility regions are associated with RA disease progression. For instance, certain SNPs in the interleukin (IL)-32, NKG2D and vascular endothelial growth factor (VEGF) genes are known to contribute to the progression of RA [7-9].

High-mobility group box protein 1 (HMGB1) is a ubiquitous nuclear protein that has been discovered in mammals [10, 11]. HMGB1 contains DNA binding domains and contributes to DNA repair and the stabilization of nuclear homeostasis [12]. HMGB1 is usually localized in the cell nucleus and is secreted into the extracellular environment in response to different stimuli; either passively during cellular apoptosis or necrosis, or actively following inflammatory signals from activated immune cells or neuronal cells [13]. While previous research has confirmed the association of HMGB1 SNPs with the susceptibility and progression of other diseases, including hepatocellular carcinoma [14] and uterine cervical neoplasia [15], little is known about the association between HMGB1 SNPs, RA disease risk and progression. We therefore selected four HMGB1 SNPs to investigate the association between these SNPs and RA susceptibility in healthy controls as well as disease progression in RA patients.

We collected blood specimens from 232 patients (cases) who had been diagnosed with RA at Dongyang People's Hospital between 2014 and 2016. The control group comprised 353 healthy volunteers with no previous history of RA. We obtained written (signed) informed consent from all study participants. The study protocol was approved by the Dongyang People's Hospital Ethics Committee and Institutional Review Board (2015-YB002). Clinicopathologic data were collected for all patients from their medical records. We used a standardized questionnaire and searched the patients' electronic medical records to obtain detailed clinical data on age, sex and disease duration, as well as concurrent treatment with methotrexate, prednisolone, and tumor necrosis factor (TNF) inhibitors. At baseline, serum samples were collected from all RA patients and analyzed for the presence of anti-citrullinated protein antibodies (ACPAs), rheumatoid factor (RF), erythrocyte sedimentation rate (ESR) and C-reactive protein (CRP). Samples were defined as ACPA-positive if anti-CCP2 titers were ≥17 IU/mL and as RF-positive if IgM RF titers were ≥30 IU/mL. Whole blood samples (3 mL) were collected from all study participants and stored at -80°C for subsequent DNA extraction.

Genotype-Tissue Expression (GTEx) data were used to identify correlations between SNPs and levels of HMGB1 expression [21]. We conducted an investigation into expression quantitative trait loci (eQTLs), to determine the functional role of phenotype-associated SNPs.

Chi-square analysis was used to confirm that the genotype distribution of each SNP was in Hardy-Weinberg equilibrium (HWE). A Mann-Whitney U-test and a Fisher's exact test were used to compare the significance of differences in distributions of demographic characteristics between healthy controls and RA patients. The correlations between genotype frequencies, clinicopathologic characteristics and RA risk were examined using adjusted odds ratios (AORs) with 95% confidence intervals (CIs), after controlling for other covariates. Significant differences in haplotype frequencies in cases and controls were analyzed using Haploview, according to the software package [22]. A p value of < 0.05 was considered statistically significant. Statistical analyses were performed using the Statistical Package for Social Sciences, version 9.1 (SAS Institute Inc., Cary, NC, USA).

All study participants were of Chinese Han ethnicity (Table 1). Between-group differences were significant for age and gender (both p < 0.001). The majority of RA patients were female (83.6%), with a mean age of 54 years, and an average RA duration of 52 months. At baseline, 60.8% were using TNF inhibitors, 45.7% were receiving methotrexate (45.7%) and 46.1% were receiving prednisolone. The majority were RF-positive (85.3%) and ACPA-positive (78.9%). To reduce possible interference of confounding variables, AORs with 95% CIs were estimated by multiple logistic regression models after controlling for age in each comparison.

HMGB1 genotypes in RA patients were evaluated to clarify the role of HMGB1 rs1360485 and rs2249825 polymorphisms in regard to RF and ACPA clinical status, RA drug consumption, as well as ESR and CRP values. No significant associations were found between any polymorphisms and clinical status, RA drug use, clinical pathologic markers or genotypes in RA patients (Table 4).

Characteristics of the study population

We searched the GTEx database to investigate whether rs1360485 and rs2249825 were associated with HMGB1 expression. Individuals carrying a genotype with the variant C at rs1360485 showed a trend for reduced expression of HMGB1, compared with the wild-type homozygous genotypes (p < 0.05, Figure 1). In addition, those with a genotype with the variant G at rs2249825 had a slightly reduced expression of HMGB1 (p = 0.06, Figure 1). 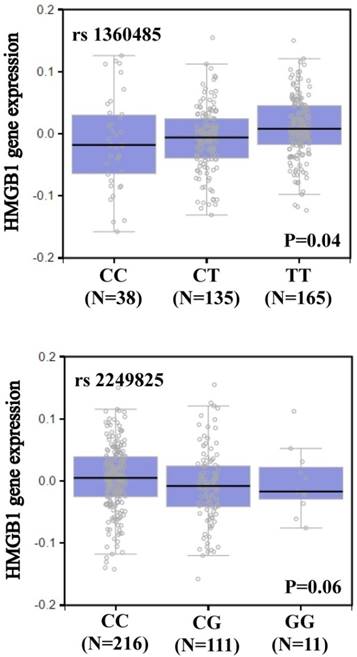 RA is a complex immune-related disease, with many genetic components and environmental factors implicated in its development. Although the availability of novel therapies in the last few years have enabled an increasing number of patients with RA to achieve a state where they have only mild or no symptoms [23], a proportion of patients remains treatment-refractory and continues to experience progressive joint destruction, functional impairment and increased mortality. In such patients, the limitations of current RA therapies emphasize the importance of continuing to investigate the pathogenesis of RA disease and identifying new therapeutic targets. We therefore sought to determine whether genetic polymorphisms in HMGB1-related genes contribute to a higher susceptibility for RA. To the best of our knowledge, our study is the first to examine the distribution of the rs1360485, rs1045411, rs2249825 and rs1412125 SNPs and their possible association with RA development. We also investigated the associations of these HMGB1 SNPs with clinical status, RA drug therapies and clinical pathologic markers, leading to a susceptibility to RA. In analyses adjusting for confounding factors, females who had one C allele in rs1360485 or one G allele in rs2249825 were at reduced risk of developing RA, by 0.65-fold (95% CI: 0.44-0.97; p < 0.05) and 0.58-fold (95% CI: 0.36-0.94; p < 0.05), respectively. However, concentration of HMGB1 in serum were unavailable because patients had only recently enrolled in the study. Osteoarthritis (OA) is a chronic inflammatory joints disorder associated with degradation of joints [24, 25]. Nevertheless, we did not find any report to examine HMGB1 SNP with OA development. Furthermore, the role of HMGB1 SNP in OA patients should also be evaluated. 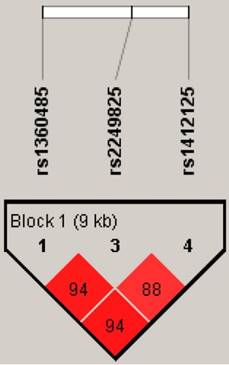 HMGB1 regulates several functions with inside or outside of cell, for example immune response, DNA repair, chromatin stabilization, cell apoptosis and gene transcription HMGB1 may play a role in the development of RA and OA [26, 27], although the evidence is uncertain as to any correlation between HMGB1 polymorphisms and development of RA disease. In this study, we examined four HMGB1 SNPs in 232 RA patients and in 353 healthy controls. We did not find significant differences in the incidence of RA patients with these polymorphisms compared to that of healthy controls. However, we found that in the female presence of one C allele in rs1360485 and one G allele in rs2249825 were both associated with significantly lower risks for the development of RA disease. The polymorphisms in the 3ʹ-flanking region of a gene can control gene expression [28]. Data from the GTEx database demonstrated that variant C at rs1360485 and variant G at rs2249825 showed a trend for reduced expression of HMGB1, compared with the wild-type T and C homozygous genotypes.

a Logistic regression with adjustment for age, gender.

Association of HMGB1 alleles and 4 tag SNPs with RA disease in the female study participants.

a Logistic regression with adjustment for age.

The linkage disequilibrium is expressed across the human genome and thus loci can be used as genetic markers to locate adjacent variants that participate to detection and treatment of disease. Haplotype analyses can provide data on the genetic contribution to disease susceptibility [29]. We evaluated the impacts of different haplotype combinations of three HMGB1 SNPs (rs1360485, rs2249825 and rs1412125) upon the risk of RA disease and found that the C/G/T haplotype was associated with a low risk for RA. It is possible that the HMGB1 C/G/T haplotype is in linkage disequilibrium with other functional polymorphisms that are responsible for susceptibility to RA.

In conclusion, our results demonstrate an association between HMGB1 gene variants and the risk of RA. We show that the HMGB1 rs1360485 and rs2249825 polymorphisms significantly lower the risk of RA progression Chinese Han females. This study is the first to report a correlation between HMGB1 polymorphisms and RA risk. HMGB1 may serve as a predictive marker for RA therapy.