Background: Pseudomonas aeruginosa can cause disease and also can be isolated from the skin of healthy people. Additionally, it exhibits certain antimicrobial effects against other microorganisms.

Microbial active metabolites are the sources of most antimicrobials used for the treatment of various infections. Since the discovery of penicillin in 1928, studies on bacteria and fungi have revealed that microorganisms are rich in bioactive substances [1]. Since penicillin, many other drugs have been discovered from microorganisms [2]. Currently, many pathogens implicated in infectious disease are rapidly developing resistance against available antimicrobials, making the treatment of infectious diseases difficult. Therefore, more effective antimicrobials must be discovered [3, 4].

Pseudomonas aeruginosa is a common Gram-negative bacterium that has been shown to produce secondary metabolites, phytotoxins, slime and antifungals, which confer obvious selective advantages to these organisms in their environment [5-8]. P. aeruginosa was further reported to produces a variety of redox-active phenazine compounds, including pyocyanin, phenazine-1-carboxylic acid (PCA), 1-hydroxyphenazine and phenazine-1-carboxamide [9-10].

In the present study, we investigated the antifungal and antimicrobial properties of P. aeruginosa metabolites against other microorganisms. We found that P. aeruginosa can produce small molecule antimicrobials other than PCA and pyocyanin.

Sixty non-repetitive strains of P. aeruginosa were obtained from various specimens from the in-patient department in our hospital between 2013 and 2015 and were identified by the Gram-stain assay, oxidase test and Vitek-2 automated microbial identification system (Merieux, France) or API-20NE (Merieux, France). The standard bacteria, including Escherichia coli (ATCC 25922), Klebsiella pneumoniae (ATCC 700603), P. aeruginosa (ATCC 27853), Bacillus thuringiensis (ATCC13838), Staphylococcus aureus (ATCC 25923), Proteus vulgaris (ATCC 6380), and Candida albicans (CA, ATCC90028), were used as calibration controls in the lab. Bacteria were grown on nutrient agar and, when appropriate, on 7% v/v blood agar or Sabouraud dextrose agar.

The 60 strains were screened for antibacterial effects against S. aureus ATCC 25923 using the disk diffusion method. A total volume of 400 μl of 1.5x108 cells/ml of S. aureus ATCC 25923 (for other microorganisms, we used the same method) was spread on Mueller-Hinton agar (MH) plates (fungi were spread on Sabouraud dextrose agar oxoid plates) with a glass spreader. Then, sterile filter paper disks were placed on the plates. Each P. aeruginosa strain was grown overnight at 37℃ in Luria-Bertani (LB) medium, and 3 μl of an 8×109-CFU/ml P. aeruginosa culture was spotted on each filter disk, followed by incubation at 30℃ for up to 48 h. The PA06 and PA46 strains produced the largest zones and were, therefore, selected for subsequent studies. PA01 and PA22, which showed no effect, were also chosen for further study.

According to the method described by Kerr et al. [5, 11], an agar plate was seeded with a 4-h LB culture of a strain of P. aeruginosa, which was applied with a sterile cotton swab in a 1-cm-wide streak. After incubation at 37°C for 24 h, the bacterial growth was removed from the plate with a microscope slide, and the residual microorganisms were killed by exposure to chloroform vapor for 30 min. LB cultures of other microorganisms were diluted in fresh broth and streaked with a loop at right angles to the line of the original inoculum. The plates were incubated at 37°C for 18 h and examined for inhibition of the indicator strain in the area that had supported the growth of the producer strain.

Each sterile Eppendorf tube was filled with 1 ml of LB medium. Then, 50 μl of an 8×109-CFU/ml P. aeruginosa culture was added into the tube, followed by 50 μl of the indicator microorganism and mixing. The mixture was shaken at 250 rpm at 30℃ for 48 h. Then, 5 μl of the mixture was utilized for the Gram-stain assay. After air-drying, the samples were observed via microscopy and imaged at 1000x.

Each of the four P. aeruginosa strains (PA01, PA06, PA22 and PA46) was inoculated into 2 L of nutrient broth and incubated at 37°C for 7 days. The culture was then centrifuged at 10000 rpm for 15 min. Subsequently, the supernatant was filtered, extracted with chloroform and dried at room temperature (25°C). The obtained extracts were weighed and kept in a desiccator for later use.

Isolation of potential components from the extracts

Antimicrobial effects of P. aeruginosa strains against other microorganisms 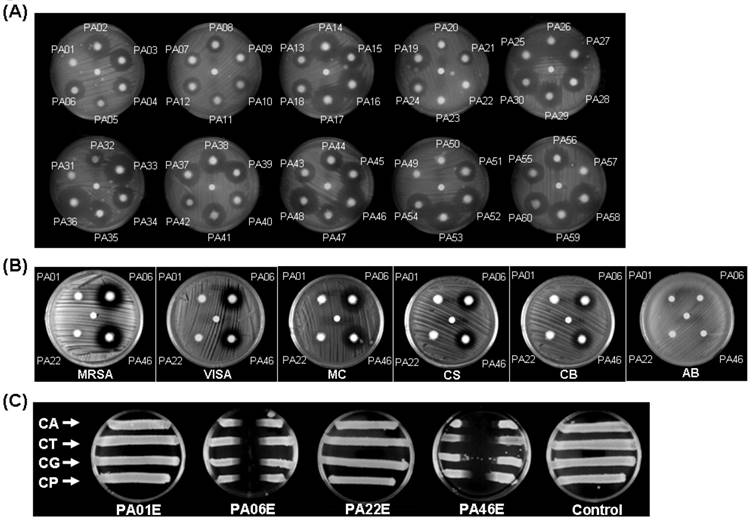 Isolation and characterization of extracts 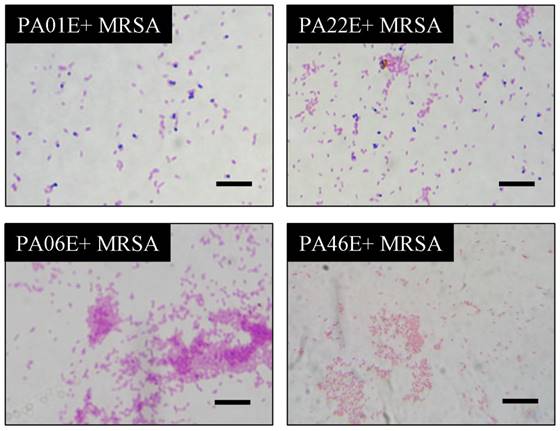 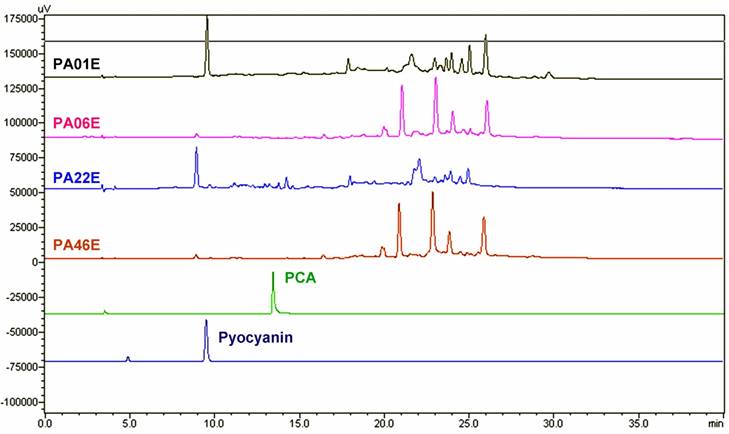 Every eluate of the major components was collected and concentrated to 0.5 ml, and then, their antimicrobial activities against S. aureus were further tested. PA06ER07 and PA06ER13 exhibited no antimicrobial effects against S. aureus, but PA06ER10, PA06ER16, PA06ER23 and PA06ER31 displayed strong inhibitory effects on S. aureus (Figure 4B). ESI-MS was applied for the molecular mass determination of the potential antimicrobial components. The MS spectra demonstrated that the molecular weights of PA06ER10, PA06ER16, PA06ER23, and PA06ER31 were 260.1 g/mol, 274.1 g/mol, 286.1 g/mol and 318.2 g/mol, respectively (Figure 5 ABCD).

Grillot et al. investigated the interactions between P. aeruginosa and yeast after incubation with a series of pure and mixed cultures [14]. They demonstrated that the growth of all tested isolates was inhibited by this bacterium in blood culture medium and bacterial culture filtrates. Hogan and Kolter described a pathogenic interaction between P. aeruginosa and CA, observing that P. aeruginosa forms a dense biofilm on CA filaments and kills the fungus [15]. Several P. aeruginosa virulence factors (Type IV pili, phospholipase C and phenazines) that are important in disease are involved in the killing of CA filaments. Both pyocyanin and pseudomonas quinolone signal (PQS) intensively accumulate in the lung mucus of CF patients, and these antifungal molecules may be important in the prevention of pulmonary cryptococcosis in CF patients [16, 17].

Most antimicrobial compounds for clinical use have been isolated from microorganisms. Additionally, several previous reports have identified antimicrobial factors from P. aentginosas [18-20]. In this work, we isolated several potential antibiotic compounds from P. aentginosas strains (Figure 1). These potential antibiotic compounds exhibited significant growth inhibition against S. aureus, especially MRSA, which is methicillin-resistant Gram-positive cocci (Figure 2). These results suggested that the components of PA06E and PA46E are not methicillin. The activities described here against S. aureus are similar to those in Machan's report from 1995, although they did not reveal more details about the substance [21]. Following that report, some antimicrobials with phenazine-like structures, including PCA and pyocyanin, were discovered and isolated from P. aeruginosa [22, 23]. 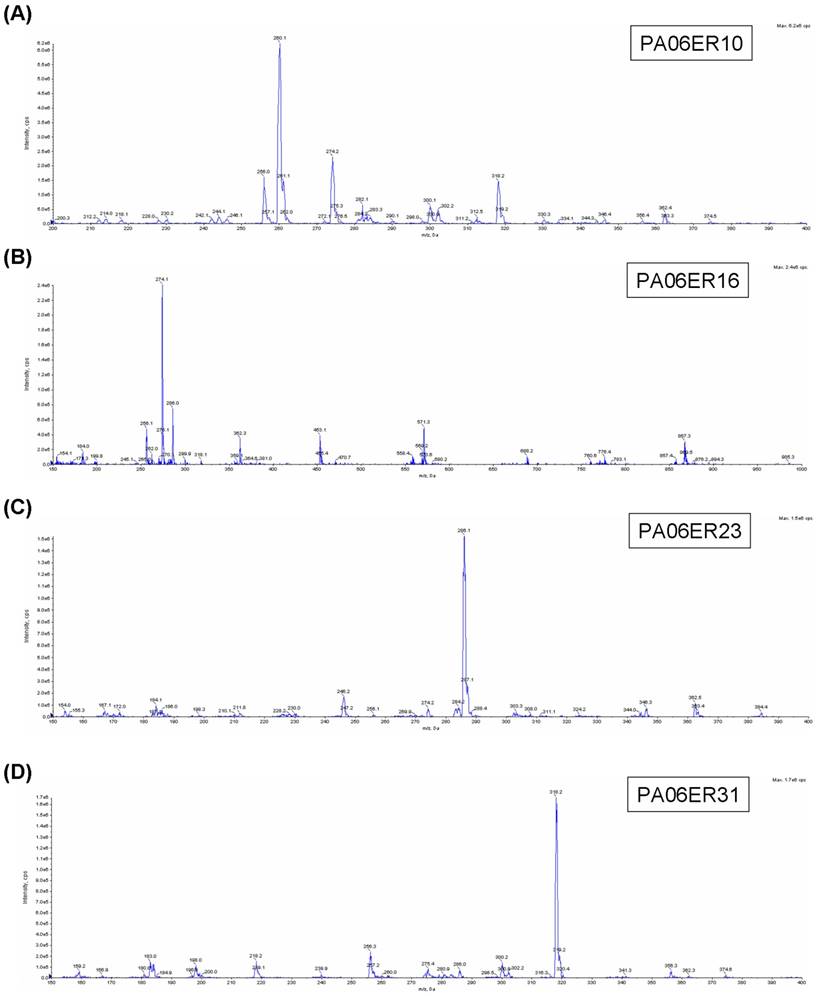 In the present study, we investigated the abilities of the extracts from PA06 and PA46 strains to inhibit the growth of other microorganisms. Our results demonstrated that these two strain extracts have strong inhibitory effects against Gram-positive cocci, Gram-positive bacilli, fungi and Gram-negative diplococcus but no inhibitory effects on Gram-negative bacilli. The inhibitory rates of these two strains against Gram-positive cocci (including MRSA and VISA) were 100%. Some P. aeruginosa strains had strong antifungal abilities, but others displayed only partial or no abilities.

In summary, P. aeruginosa has potent antimicrobial activities. The underlying mechanism seems to be the production of small molecular substances that are distinct from PCA or pyocyanin. These potential antimicrobial components have strong inhibitory effects against Gram-positive cocci and Gram-negative diplococcus but not against Gram-negative bacilli. These findings will be meaningful for the treatment and prevention of various infections in the clinic, especially MRSA, VISA, and fungal infections.

This work was supported by the Infectious Diseases Control Project of the Ministry of Health of China (No. 2012ZX10004207-004) and the Science and Technology Project of Qingyuan City (No. 2014A005).