Background: Clinical assessment reveals that patients after surgery of cardiopulmonary bypass or coronary bypass experience postoperative cognitive dysfunction. This study aimed to investigate whether resuscitation after a hemorrhagic shock (HS) and/or mild cerebral ischemia caused by a unilateral common carotid artery occlusion (UCCAO) can cause brain injury and concomitant neurological dysfunction, and explore the potential mechanisms.

Methods: Blood withdrawal (6 mL/100 g body weight) for 60 min through the right jugular vein catheter-induced an HS. Immediately after the termination of HS, we reinfused the initially shed blood volumes to restore and maintain the mean arterial blood pressure (MABP) to the original value during the 30-min resuscitation. A cooling water blanket used to induce whole body cooling for 30 min after the end of resuscitation.

Conclusions: When combined with an HS, an UCCAO is associated with ischemic neuronal injury in the ipsilateral hemisphere of adult rat brain, which can be attenuated by therapeutic hypothermia. A resuscitation from an HS regards as a reperfusion insult which may induce neurological injury in patients with an UCCAO disease.

Hemorrhagic shock (HS) is regarded as the leading cause of death in trauma patients [1]. The resuscitation after an HS causes a reperfusion or reoxygenation insult [2-4], gut injury, and multiple organ dysfunctions [5, 6]. Clinical assessment reveals that patients after surgery of an abdominal aneurysm [7], cardiopulmonary bypass [8], or coronary bypass [9] experience postoperative cognitive dysfunction, indicating that ischemia/reperfusion injury causes brain injury. However, it is not known whether resuscitation after a [10-12] HS can cause cerebral injury and concomitant neurological dysfunction, and its potential mechanisms.

Polytrauma can be defined as a combination of multiple, simultaneous injuries to more than one body part or organ system. The combination of injuries often occurs in modern warfare and automobile and industrial accidents [13-15]. Patient outcomes following a minor polytrauma are often worse than those with a single severe injury.

The present study presents a new rat model of concurrent combined HS and UCCAO injury and to assess the effects of the combined injury on neurological functions. This highly reproducible model of polytrauma combined HS and brain ischemia caused by UCCAO. Hemorrhagic shock was induced by blood withdrawal for 60 min and followed by reinfusion of the initially shed blood volumes during the 30-min resuscitation. Unilateral ligation of the common carotid artery was performed on the right side to induce right hemisphere ischemia.

All the animals were intraperitoneally with sodium pentobarbital (40 mg/kg). We cannulated a polyethylene 50 catheter (PE-50; Clay Adams, Sparks, MD, USA) into the right femoral artery for monitoring mean arterial blood pressure (MABP) with a pressure transducers attached to a Gould 4-channel polygraph (Gould, Cleveland, OH, USA) or for collecting blood samples (Figure 1). An incision was made, and the right jugular vein was cannulated with a PE-50 tube to administer shed blood. Unilateral ligation of the common carotid artery was performed on the right side to induce right hemisphere ischemia (Figure 1). Upon placing in a stereotaxic apparatus, we inserted a 24-gauge stainless-steel needle probe (diameter, 0.58 mm; length, 40 mm) into the right hippocampus using the coordinates: A, interaural 9.7 mm; L, 2.0 mm from the midline; and H, 4.5 mm from the top of the skull [21] for monitoring cerebral blood flow (CBF). We also measured the local CBF in the hippocampus with a Laserflo BPM2 laser Doppler flowmeter (Vasametics, St. Paul, NM).

Hemorrhagic shock (HS) was induced according to the methods of a previous study [22] with minor modifications. After performing baseline measurements, HS was induced by blood withdrawal (6 mL/ 100g body weight) at steady for 60 minutes through the right jugular vein catheter (Figure 1). Immediately after the termination of shock, the initially shed blood volumes were reinfused to restore and maintain the MABP to the original value during the 30-min resuscitation. Sham-shock animals underwent cannulation of the femoral artery and femoral vein followed by a laparotomy. However, no blood was withdrawn, and the MABP was kept within normal limits. Body core temperature (Tco) was continuously monitored and maintained at 37±0.5oC in rat groups without whole body cooling (WBC) using a 36oC water circulating blanket. However, in rat groups with WBC, WBC was accomplished by a cooling 16oC water circulating blanket for 30 min. After the 30 min cooling period, the catheters were removed, femoral artery and vein were ligated, and the skin closed. Animals were returned to the normal room temperature (26oC) and appropriately fed and hydrated. Rats that survived to day 3 of hemorrhage shock were considered survivors, and the data were used for analysis of the results. Blood samples were obtained from survivors on day 3 and rats were killed with sodium pentobarbital overdose and perfused via the left cardiac ventricle with normal saline followed by 10% neutral-buffered formalin.

The acute neurological deficit was evaluated in all group rats the day before and three days after HS using a modified neurological severity score [mNSS] [23]. The higher the score is, the more severe the injury is, with a maximum of 14 points. Limb motor function was determined by using an inclined plane system with a microcontroller [24]. The lower the angle of the inclined plane is, the lesser the limb motor function is, with a maximum of 60 degrees.

We subjected the anesthetized animals to transcardial perfusion of heparinized 0.05 mol/L phosphate buffered saline (PBS), followed by ice-cold 15% sucrose in PBS. We rapidly removed the brain tissues, frozen them in liquid nitrogen and then sectioned them into slices. Brain slices were stained with 2,3,5-triphenyl tetrazolium chloride (TTC) as described previously [25]. The infarct volume (mm3), as revealed by negative TTC stains indicating dehydrogenase-deficient tissue, was measured in each slice and summed using computerized planimetry. The distortion of infarct volume caused by brain edema was also corrected according to the report of Lin et al. [26].

After hematoxylin and eosin staining, a pathologist blinded for the sample grouping scored the histological changes observed in the slices. According to the descriptions detailed previously for lungs [27], intestines [28], brains [29], kidneys and livers [30], we evaluated the degrees of tissue damage.

Determination of cytokines in the serum

Data are presented as mean±S.E.M. Repeated measures analysis of variance was used to compare serial biochemical data and vital signs. We performed Chi-Square test with Fisher's exact test to analyze the survival rate. For behavioral parameters, the data were analyzed by two-way repeated factor analysis of variance. When the analysis of variance showed significance, Student- Newman-Keul's post hoc test was used. Histological scores were analyzed using Mann-Whitney U-test. The statistical software SigmaPlot 12.0 for Windows was used. A p-value <0.05 was considered statistically significant.

Combined HS and UCCAO, but Not HS or UCCAO Alone, Induces Neurological Injury 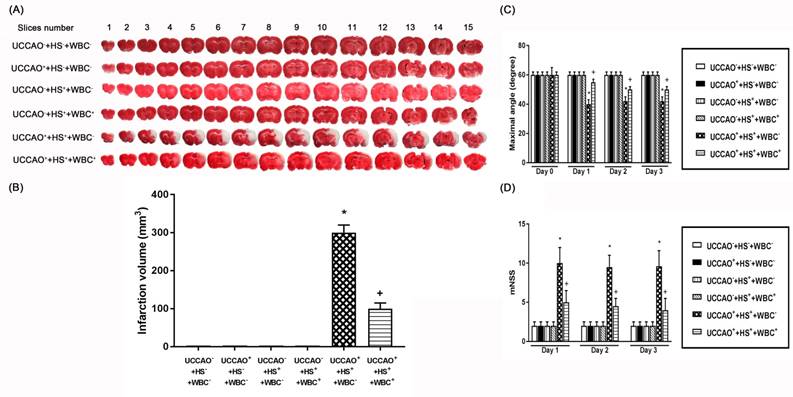 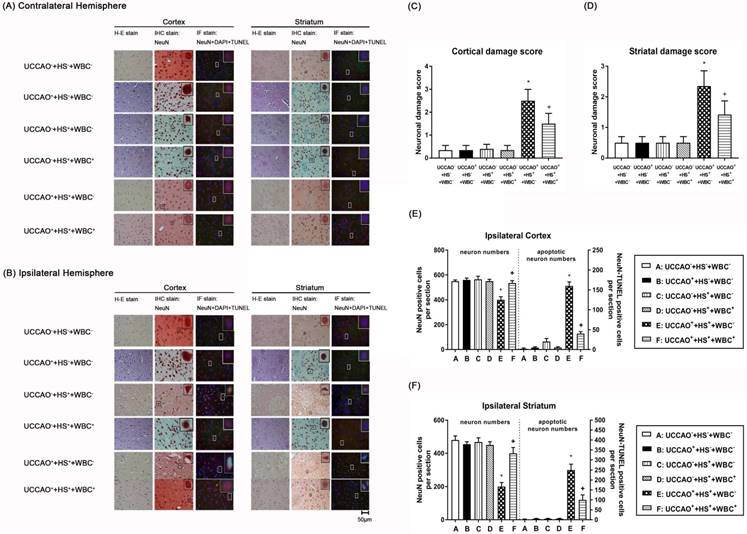 Our present results are consistent with several previous investigations. For example, occlusion of one common carotid artery alone caused only minor cerebral ischemia in the ipsilateral hemisphere [16-18]. Combined UCCAO and systemic hypoxia-induced ischemic neuronal injury in the ipsilateral hemisphere of both adult and neonatal rat brain [20, 32, 33]. In many circumstances, patients with a traumatic brain injury suffered from multiple organ injuries [34-36].

As shown in the present study, hemorrhagic shock not only causes intestinal injury but also leads to injury of other vital organs including liver, kidney, and lung and even brain. A systemic ischemic/reperfusion injury following an HS and a subsequent resuscitation causes intestinal epithelial damage in an early event and leads to the development of multiple organ dysfunctions [37, 38]. Intestinal ischemia/reperfusion resulted in significant increases in the levels of tumor necrosis factor-α and interleukin-6 both in the serum and in cortical and hippocampal regions, committed with microglial activation, a key cellular mediator in neuroinflammation and neurodegeneration [39]. Our present results demonstrated that in intact (UCCAO-) rats with reduction of ~50% of CBF, overproduction of TNF-α, IL-1β, and IL-6 in the peripheral blood stream alone did not cause neuronal cell apoptosis during an HS. In contrast, in UCCAO+ rats with reduction of ~20% of CBF, profound cerebral ischemia (or ~18 %of CBF) may disrupt the blood-brain-barrier and allow more pro-inflammatory cytokine to enter into the brain. Microglial activation induced by pro-inflammatory cytokines causes neuronal cell apoptosis [40, 41]. Cells or tissues injured by an HS may recover following a resuscitation or reperfusion. However, resuscitation or reperfusion may exacerbate multiple organ injuries by the generation of reactive oxygen species and activation of destructuring enzymatic reactions [42]. Our present data further demonstrated that hypothermia attenuated the neurological injury after resuscitation from an HS by reducing cerebral ischemia.

Indeed, mild hypothermia (32-34oC) has been indicated to prevent reperfusion injury after cerebral or visceral ischemia caused by a circulatory arrest [43-45]. Therapeutic hypothermia may exert its beneficial effects mainly via reduction of metabolic rate which leads to preservation of tissue energy state and intracellular pH in both heart and brain [46]. Hypothermia reduces resuscitation fluid volumes required to maintain blood pressure in a rat HS model [22]. Hypothermia improves the outcome of an HS by reducing reactive oxygen species expression as well as microvascular permeability [47]. Our present data further suggest that hypothermia improves results of HS by maintaining a normal CBF in an HS model. Hypothermia during resuscitation significantly ameliorates multiple organs (including brain) injury in HS rats.

An UCCAO alone or an HS alone caused only a slight (70% CBF) or a moderate (52% CBF) cerebral ischemia and did not cause neurological injury. A severe cerebral ischemia (or cerebral blood flow denoted to 17% of the original level) following a combined HS and UCCAO caused neurological injury. In this study, we provide the first data to show that a resuscitation after an HS is regarded as a reperfusion insult which may induce neurological injury in patients with the carotid occlusive disease. This information is immediately clinically applicable for critical care physicians and emergency physicians treating such patients.

C.H.W and C.P.C performed the animal experiments and obtained the in vivo data. H.J.L, M.T.L, and C.C.C designed the study and wrote the manuscript. Y.F.T and C.P.C analysis the data. C.C.C, and C.P.C obtained the funding for the study.

6. Clark JA, Coopersmith CM. Intestinal crosstalk: a new paradigm for understanding the gut as the "motor" of critical illness. Shock. 2007;28:384-93