Background: Genetic variation near the interferon lambda 3 (IFNL3) is known to be associated with response to pegylated interferon (pegIFN) and ribavirin combination therapy in patients with chronic hepatitis C virus (HCV) infection which is often accompanied by hepatic steatosis.

Aims: We examined whether this genetic variation is associated with host lipids and treatment response.

Methods: A total of 101 Japanese patients who had underwent liver biopsy before treatment with pegIFN and ribavirin for HCV genotype 1b infection were retrospectively analyzed for association between IFNL3 genotypes (rs8099917) and clinical factors including histopathological features of the liver. The presence of >5% steatosis in the liver specimen was defined as hepatic steatosis.

Conclusions: Our results confirmed that IFNL3 genotype is associated with hepatic steatosis as well as IFN response.

Hepatitis C virus (HCV) affects an estimated 170 million individuals worldwide and is one of the major causes of chronic hepatitis, cirrhosis, and hepatocellular carcinoma (HCC) [1]. Although direct-acting antivirals against HCV (DAAs) have been developed, a combination treatment of pegylated interferon (pegIFN) plus ribavirin is still an important option for such patients as failed to respond to DAAs-based therapy [2]. IFN-based therapy is effective in 50% of the patients with HCV genotype 1 infection, which is the most commonly encountered genotype in Japan, Europe, and the US.

Recent studies have shown that single nucleotide polymorphisms (SNPs) located upstream of the IFN lambda 3 (IFNL3) gene were strongly associated with treatment response for HCV [3-7]. These SNPs include rs12979860 and rs8099917, which are in strong linkage disequilibrium. Homozygous for the major allele of these SNPs is associated with good response. The IFNL3 gene encodes IFN-lambda, which has been shown to have antiviral activity like type I IFNs (alpha and beta). The mechanism through which IFNL3-related SNPs affect treatment response is unclear; however, the differential expression or activity of IFN-lambda between these genotypes is a possible reason [4,5].

Host lipid metabolism has been shown to be associated with treatment responsiveness [8] and HCC [9] as well as cardiovascular events. HCV modulates the pathway of host lipid metabolism according to its lifecycle: cellular entry, replication, assembly, and secretion [10]. HCV infection causes dyslipidemia; pretreatment serum total and low-density lipoprotein cholesterol (LDL-C) levels have been associated with treatment response [11]. Low serum lipid levels in HCV infection have been correlated with steatosis, which is associated with more severe liver disease and poorer IFN response [8]. It has been reported that IFNL3-related SNPs may be associated with serum cholesterol levels and hepatic steatosis, which suggests the role for the IFNL3 genotype in the altered lipid metabolism of HCV-infected patients [12-14]. Indeed, IFN treatment has been reported to affect serum cholesterol levels during the therapy [15]. A recent study also suggests that antiviral immune response to HCV induce lipogenesis [16].

Baseline characters according to IFNL3 genotypes

Baseline characteristics of patients according to IFNL3 genotypes

Clinical factors associated with the presence of hepatic steatosis 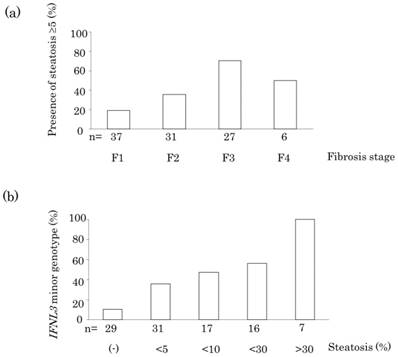 Several host and viral factors have been reported to be associated with the efficacy of pegIFN plus ribavirin combination therapy in chronic hepatitis C patients. These factors include age, gender, ethnicity, viral genotypes, stage of liver disease, metabolic factors, and variations in host genes involved in the IFN pathway and viral genome sequence [17,18]. Among them, IFNL3 genotype has been reported to be one of the strongest predictors of treatment response [19,20]. In the present study, we assessed the effect of hepatic steatosis and IFNL3 genotype on treatment response in Japanese patients infected with HCV genotype 1b. Consistent with previous reports [12-14], we confirmed that host IFNL3 genotype is strongly associated with treatment response.

Consequently, it appears that the effects of hepatic steatosis and serum lipid levels on treatment response may be linked to host IFNL3 genotype. For instance, IFNs can activate signal transducer and activators of transcription [18,21,22] which is involved in adipogenesis through the peroxisome-proliferator-activated receptor-gamma (PPARG) activation pathway. Cai et al. [14] reported the association of steatosis with SNPs in PPARG as well as in patatin-like phospholipase domain-containing 3 and IFNL3.

The mechanism of lipid metabolism is complex in HCV patients. Several host factors, such as ALT level, fibrosis stage, or metabolic factors like body mass index, have been well-reported to be associated with hepatic steatosis in HCV genotypes 1 and non-3 [8,26,27]. In addition, viral factors such as HCV core amino acid variations have been associated with IFNL3 genotype and hepatic steatosis [28]. In our study, although the association was not significant, mutations at HCV core amino acid at position 70 tended to be lower in IFNL3 major genotype than in minor genotype (37% vs. 56%, p=0.08), and lower in patients without steatosis than in patients with steatosis (39% vs. 51%, p=0.22) (data not shown). On the other hand, amino acid mutations at core position 91 was significantly lower in major genotype (28% vs. 58%, p=0.004), and lower in patients without hepatic steatosis (26% vs. 59%, p=0.001). Viral factors may affect the association between IFNL3 genotype and hepatic steatosis. Limitations of our study include retrospective nature of the study and small sample size. Furthermore, HCV genotype and ethnicity could affect the results [29,30]. Recently, HCV treatment by IFN-free DAA regimen has been shown to affect host lipid metabolism, suggesting the role of HCV replication and/or core protein on lipid homeostasis [31,32]. Further studies will be needed to clarify the role of host genotype, viral factors, and antiviral therapy on lipid metabolism and outcome of HCV infection.

In conclusion, we examined the relationship between IFNL3 genotype, liver histopathology, and predictive markers with response to the combination therapy of pegIFN and ribavirin in HCV genotype 1b-infected Japanese patients. Hepatic steatosis and LDL-C levels may not have any independent clinical significance beyond that of using IFNL3 genotype to predict treatment response. However, considering that IFNL3 minor genotype could be associated with hepatic steatosis, early intervention combined with potent antiviral therapy appear reasonable. A greater understanding of the relationship between host genotype and viral pathogenesis will help to better manage HCV infection.

Patients received a standard dose of pegIFN alfa-2a or alpha-2b subcutaneously each week plus oral ribavirin daily for more than 48 weeks. Weight-based ribavirin were administered (600 mg for ≤60 kg, 800 mg for >60 kg and ≤80 kg, and 1000 mg for >80 kg). Table 1 shows the clinical background of the patients at the start of combination therapy. Sixty of them (59%) were previously reported [33].

This study was approved by ethics committee of Chiba University, Graduate School of Medicine (No. 406/582/1753). Participation in the study was posted at our institutions. Written informed consent was obtained from all the patients before liver biopsy.

Sustained virological response (SVR) was defined as HCV RNA negativity at 6 months after the end of treatment.

HCV RNA levels were measured quantitatively before treatment and during the 12-week therapy by Taqman PCR (Cobas Taqman HCV, Roche, Tokyo, Japan). RNA levels were expressed using log10 IU/mL of viral loads, with the lower limit of 1.2 log IU/mL. HCV RNA genotype was determined as per the method of Ohno et al [34].

Liver biopsy specimens were obtained percutaneously, and the specimens were histopathologically assessed, according to the criteria of Desmet et al. [35]. Hepatic fibrosis was staged as F1-2 for mild to moderate fibrosis and F3-4 for severe fibrosis to cirrhosis. Inflammatory activity of the liver was graded as A1 for mild activity and A2-3 for moderate-severe activity. Hepatic steatosis was graded as follows: <1%, ≥1% to <5%, ≥5% to <10%, ≥10% to <30%, and ≥30%. Hepatic steatosis was confirmed when >5% steatosis were observed in a hepatic tissue specimen [36]. Among 101 patients, 40 (40%) had liver steatosis before therapy.

Comparisons between groups were made by the χ2 or Fisher's exact test for categorical variables and Student's t-test for quantitative variables. Quantitative data are expressed as mean and standard deviation. Univariate analysis was performed for the variables listed in Table 1. Multivariate logistic regression analyses were used to determine the predictors of treatment response. Variables with p < 0.05 after univariate analysis were subjected to multivariate analysis. The Cochran-Armitage trend test was used to analyze the association between the prevalence of steatosis and liver fibrosis in the subjects. Statistical significance was defined at p < 0.05.

This work was supported by the Grant for Scientific Research 22200701 from the Ministry of Education, Culture, Sports, Science, and Technology, Japan (OY).

Tatsuo Kanda received research grants from Merck Sharp and Dohme (MSD), Chugai Pharm and AbbVie. The founding sponsors had no role in the design of the study; in the collection, analyses, or interpretation of data; in the writing of the manuscript, or in the decision to publish the results. The other authors declare no conflicts of interest. We thank Prof. Naoya Kato and Dr. Hitoshi Maruyama at Department of Gastroenterology, Chiba University for valuable discussions.