Melanin is a normal production protecting skin from environment-causing damage. Plants produce some agents in response to their environment. These agents could be applied in cosmetic production. Some Chinese herbals have immunomodulatory activities and modulate the symptoms of several diseases. Melanogenesis represents a complex group of conditions that are thought to be mediated through a complex network of regulatory processes. Previously, some studies found that the extracts of Astragalus membranaceus (PG2) regulated immunity and supported hematopoiesis. Herein, we want to determine the molecular mechanisms by which PG2 inhibits melanogenesis in B16F10 melanoma cells. The cellular melanin contents and expression of melanogenesis-related protein, including microphthalmia associated transcription factor (MITF) and tyrosinase were significantly reduced after PG2 treatment. Moreover, PG2 increased phosphorylation of ERK, without affecting phosphorylation of p38. These results suggested that PG2 as a new target in reducing hyperpigmentation through the ERK signal pathway. PG2 has potential for cosmetic usage in the future.

The degree and distribution of melanin pigmentation is the main regulator of the hair and skin color. Moreover, melanin plays important photo-protective roles in the carcinogenic and the deleterious effects of ultraviolet radiation of solar light. In European, irregular hyperpigmentation may result in various dermatological disorders, including melasma and age spots. In Asia, people make skin whiter is extended. Past studies focused on the screening of natural compounds from plant sources for anti-melanogenic agent [1, 2]. The α-melanocytes stimulating hormone (α-MSH) binds the melanocortin-1 receptor (MC1R), induces cAMP pathway and results in melanin synthesis. The microphthalmia-associated transcription factor (MITF) regulates enzymes required for melanin synthesis including tyrosinase, tyrosinase-related protein 1(TRP1), and tyrosinase-related protein 2 (TRP2). Tyrosinase is an important enzyme, as it regulates the rate limiting steps in melanogenesis. Plants can produce some compounds for cosmetic applications. Some agents have immunomodulatory activities and modulate the inhibition of melanogenesis [3]. Traditional Chinese medicine, an important aspect of alternative medicine. Astragalus membranaceus is a medicinal herb that is widely used in the treatment of inflammatory diseases, tumors, radical scavenger activity, various cardiovascular diseases, and neuroprotective activity [4-6]. A polysaccharide isolated from the radix of A. membranaceus, called PG2, used in traditional Chinese medicine, with potential hematopoiesis inducing and immunomodulating activities. PG2 extracted from A. membranaceus has been demonstrated as a novel alternative medicine for cancer patients [7, 8]. In this study, we sought to investigate an anti-melanogenic signaling pathway in α-MSH-treated B16F10 melanoma cells by treating PG2. To improve the efficacy and safety of PG2, a further understanding of mechanism of PG2 anti-melanogenesis is required. Our studies may offer new roads to increase the anti-melanogenic potential of PG2.

Cells (105/well) were treated with various concentration of PG2 in serum- free medium for 24 h. Cell proliferation was assessed by Cell Counting Kit-8 (Sigma-Aldrich, St. Louis, MO, USA) according to the manufacturer's instructions [3].

The cells were harvested and lysed in cold lysis buffer (20 mM sodium phosphate pH 6.8, 1% Triton X-100, 1 mM PMSF, and 1 mM EDTA) at the end of experiment. The melanin pellets were dissolved in Soluene-350 (Perkin-Elmer, Waltham, MA, USA) for 15 min at 100℃ and centrifuged at 15, 000 g for 15 min. The absorbance at 500 nm was measured [9]. The bicinchoninic acid (BCA) protein assay was used for protein content (Pierce Biotechnology, Rockford, IL, USA). The PD98059 (50 μM) (Sigma-Aldrich) were pretreated to cells for 1h, then PG2 was added to cells. PG2-treated or untreated cells were lysed in cold lysis buffer and protein lysis was harvested.

All data were expressed as mean ± standard deviation (SD). The one- way ANOVA test was used to determine differences between groups. Any P value less than 0.05 is considered statistically significant.

Evaluation of anti-melanogenic activity of PG2 in vitro

MAP kinase are involved in melanogenesis. The MAP kinase family including ERK and p38 has been reported in hyperpigmentation [11, 12]. The ERK signaling can down-regulate the melanin synthesis. Furthermore, up-regulation of phosphorylation of p38 is related to the production of melanin. We examined the involvement of MAPK signaling pathway in the melanogenic effect of PG2 by immunoblotting. In this study, the α-MSH significant inhibited the ERK signaling pathway (Fig. 3). However, PG2 increased the phosphorylation of ERK in the α-MSH-treated cells without influencing p38 pathway. However, ERK phosphorylation significantly decreased after α-MSH treatment (Fig. 3). In order to evaluate the relationship between the anti-melanogenesis effect of PG2 and the ERK pathway, PD98059, a selective inhibitor of ERK, was used the stimulatory effects of α-MSH on MITF and tyrosinase as shown in Fig. 4A. PD98059 significantly reduced the expression of ERK phosphorylation. PG2 reduced the expression of tyrosinase and MITF in α-MSH-PD98059-PG2 group compared with those in α-MSH-PD98059 group. Meanwhile, the melanin increased after PD98059 treatment (Fig. 4B). PG2 slightly reduced melanogenesis after α-MSH and PD98059 treatment. The ERK signaling inhibitors blocked the hypopigmenting effects induced by PG2. These results suggest that PG2 increases ERK signaling to inhibit melanogenesis. 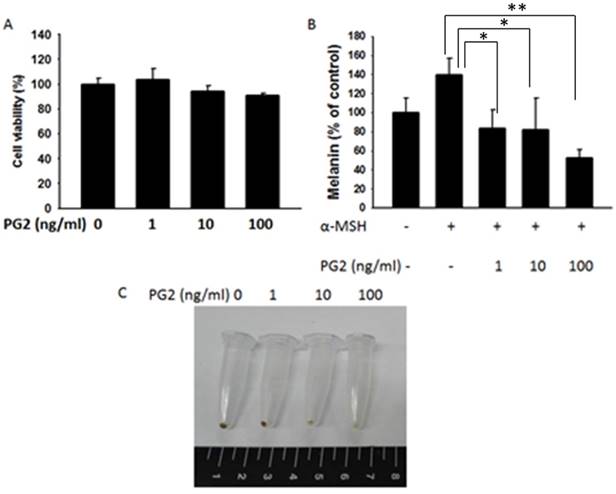 The expression levels of tyrosinase and MITF after PG2 treatment. Cells were treated with PG2 at the concentration of 1, 10 or 100 ng/ml for 24h. The protein expression was determined by Western blotting. Inserted values indicated relative proteins expression in comparison with β-actin. 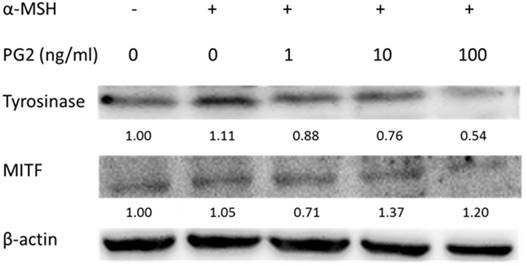 Effect of PG2 on the expression levels of MAPKs and phosphorylated-MAPKs in cells. Cells were treated with PG2 at the concentration of 1, 10 or 100 ng/ml for 24h. The protein expression was determined by immunoblotting. Inserted values indicated relative proteins expression in comparison with β-actin. 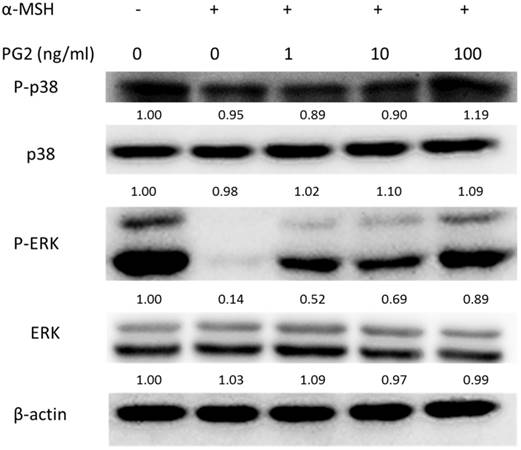 PG2 inhibited the production of melanin through ERK pathway. B16F10 cells were treated with PG2 at the concentration of 100 ng/ml for 24h and PD98059 (50 μM) for 1h. (A) The protein and (B) melanin expression were measured (mean ± SD, n=6). The expression of β-actin served as the quantitative control. Inserted values indicated relative proteins expression in comparison with β-actin. *, P<0.05; ***, P<0.001. 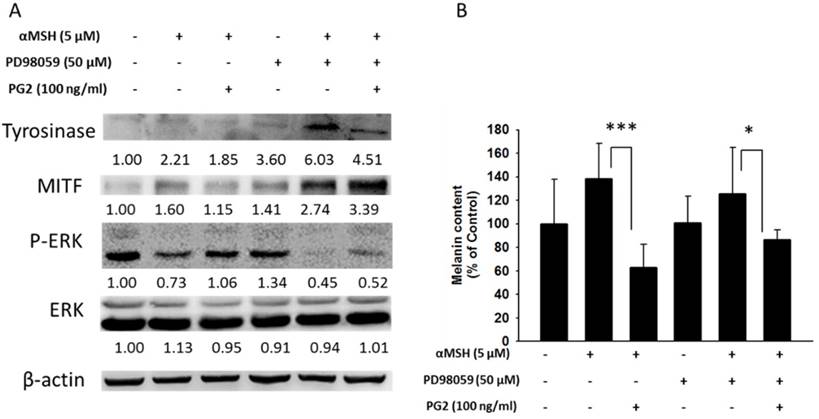 PG2 is a bioactive extract of A. membranaceus which is believed to improve palliative treatment in advanced cancer patients [7]. In advanced cancer patients, PG2 is safe and effective botanical-derived drug. In this study, PG2 significantly inhibited the melanin production in B16F10 cells. Tyrosinase and MITF were reduced after treatment with PG2, as assessed by Western blot analysis in a dose-dependent manner. Herein, we demonstrated that PG2 could inhibit melanin production by up-regulating to ERK signaling pathway after α-MSH treatment. PG2 could be an effective and safe agent for using in cosmetics. The inhibition of p38 suppressed activation of cAMP response element-binding protein (CREB) in melanogenesis [12]. In this study, PG2 did not significantly influence the phosphorylation of p38. The activation of ERK signal pathway induced the degradation of MITF [13]. However, the involvement of ERK signaling pathway was confirmed by the treatment of PD98059 in PG2-treated B16F10 cells. Pleiotrophin increased the level of ERK phosphorylation and inhibited the production of melanin [14]. PG2 could dramatically activate ERK signaling pathway to regulate melanin synthesis. The phosphorylation of ERK is significantly observed when B16F10 cells are treated with PG2. Consistent with the previous finding, down-regulation of ERK signaling pathway by a chemical inhibitor reduced the anti-melanogenic effect of PG2. The molecular weights of PG2 is between 20 to 60 kilodalton. PG2 contains α-1,4-linked glucan, arabinogalactans, rhamnogalacturonans and arabinogalactan protein. Recent studies have suggested that PG2 could modulate immunological function and down-regulate P-glycoprotein expression in tumor [8]. By taking advantages of the pleiotropic activities of PG2, we can come to a conclusion that PG2 appears to hold promise for the treatment of melanogenesis.