Objectives: Menopausal transition in women initiates with declining estrogen levels and is followed by significant changes in their physiological characteristics. These changes often lead to medical conditions, such as obesity, which is correlated with chronic low-grade/subclinical inflammation. Ocimum gratissimum L. is a food spice or traditional herb in many countries; the plant is rich in antioxidants, which possess anti-inflammation activities and multitude of other therapeutic functions.

Conclusion: These findings suggested that OGE dietary supplements may be useful in controlling body weight of menopausal women.

Onset of menopause in females is often associated with increased visceral fat accumulation, a condition known as central obesity [1], and subsequent increase in incidence of hypertension, atherosclerosis, metabolic syndrome, and cardiovascular diseases. Although body composition of postmenopausal women results from long-term interactions among between intake, energy expenditure, and sex hormonal status or combination thereof [2], research remains ongoing regarding methods of alleviating menopausal symptoms. Krumm et al. [3] reported that physical activity is an important component of long-term weight maintenance in postmenopausal women. However, in a recent large prospective study among women consuming normal diet, although physical activity was inversely related to weight gain among normal-weight women, no relation was observed among heavy-weight women [4]. Result of such studies invoked interest on other factors that may be involved in preventing physical activities from affecting weight reduction among obese menopausal women.

As inflammation contributes to progression of obesity and its comorbidities [5], numerous studies reported that women undergoing menopausal transition exhibit deleterious changes in circulating inflammatory markers and adipokines correlated with increased visceral adiposity [6], which plays significant pathophysiological role in development of metabolic syndrome and its sequelae, possibly because it serves as source of a number of substances, including free fatty acids and adipokines, such as adiponectin, tumor necrosis factor-α, and plasminogen activator inhibitor type 1 [7-9]. These observations highlighted the importance of inflammation to menopause-associated obesity.

In obesity models, ovariectomy can induce weight gain and fat deposition in rodents, whereas estradiol or antioxidant treatment can restore these changes [29]. Therefore, we investigated effects of OGE in alleviating obesity-related inflammation by using ovariectomized (OVX) animal models.

Preparation of OGE and composition analysis

OGE was prepared as described in [22]. O. gratissimum leaves were harvested and washed in clear running water and air-dried for 1 week to obtain coarse powders. Powdered plant materials (20 g) were homogenized with distilled water (1000 ml) using a polytron. Homogenate was boiled for 1 h and then filtered through two-layer gauze. Filtrate was centrifuged at 20,000 × g and 4 °C for 30 min to remove insoluble pellets. Supernatant was collected, lyophilized, and stored at -20 °C until usage. Prior to assays, OGE powder was dissolved at indicated concentration. Total polyphenol and flavonoid contents were determined by Folin-Ciocalteau [30] and Lamaison methods [31], respectively. Polyphenol and flavonoid contents were quantified by comparison with pure standards.

All female Sprague-Dawley rats (200 g) were purchased from the National Laboratory Animal Center (Taipei, Taiwan). All procedures involving laboratory animal use were in accordance with guidelines of the Institutional Animal Care and Use Committee of China Medical University (IACUC-CMU) for the care and use of laboratory animals. All experimental procedures were also approved by the IACUC-CMU.

All animals were maintained under regulated 12 h/12 h light-dark illumination cycles at constant temperature (22±0.5 °C) and humidity (45%-50%). Food and drinking water were supplied ad libitum. Body weight was measured at indicated time of the day during experiments. After 12 weeks, animals were sacrificed, and blood and perigonadal adipose tissues were immediately obtained. Dorsal fat and uterus of each rat were dissected and weighed.

Perigonadal adipose tissues were fixed in zinc formaldehyde at 4 °C overnight prior to their transfer and storage in phosphate-buffered saline at 4 °C. Tissues were subsequently embedded in paraffin, sectioned, and stained with hematoxylin and eosin. Digital images were captured with an Olympus DX51 light microscope (Tokyo, Japan).

Initial investigations determined effects of OGE uptake on estrogen-deficiency-induced obesity. Increased body weight in OVX rats was significantly higher (p < 0.01) than that in sham control rats (Figure 1A). After 12 weeks, body weights of sham and OVX rats measured 313 ± 8 and 353 ± 11 g, respectively. Increased body weight of OVX + 0.2 mg/ml OGE group was significantly lower than that of OVX group (p < 0.01) but not that of OVX + 0.1 mg/ml OGE group.

Effects of OGE supplement on body weights. Rats were sham-operated or OVX. OVX rats were divided in three groups; two groups were supplied with water containing OGE (0.1 and 0.2 mg/ml), and the other one received sterile water. (A) Body weight was measured each week for 12 weeks. (B) After 12 weeks, rats were sacrificed, and uteruses were obtained and weighed. #, p < 0.05 compared with OVX. **, p < 0.01 compared with sham. 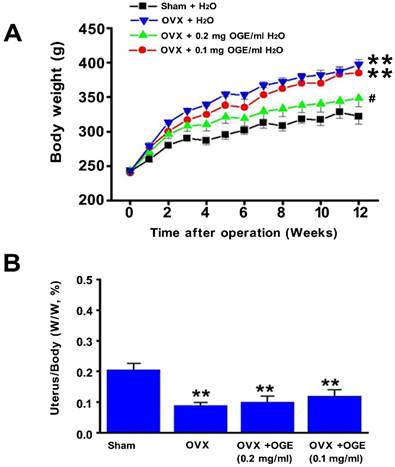 Effects of OGE supplement on adipocyte size and dorsal fat content. Rats were sham-operated or OVX. OVX rats were divided in three groups; two groups were supplied with water containing OGE (0.1 and 0.2 mg/ml), and the other one received sterile water. After 12 weeks, rats were weighed and subsequently sacrificed to obtain periuterine adipose tissues and dorsal fat. (A) After hematoxylin and eosin staining, adipocytes were observed by using light microscope (200×). (B) Dorsal fat samples were collected and weighed. n.s.: no statistical significance compared with sham or OVX. 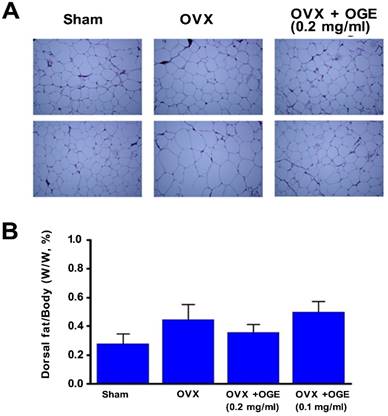 OGE supplement insignificantly affected blood lipids. Rats were sham-operated or OVX. OVX rats were divided in three groups; two groups were supplied with water containing OGE (0.1 and 0.2 mg/ml), and the other one received sterile water. After 12 weeks, blood samples were obtained for determination of serum total cholesterol and triacylglycerol. n.s.: no statistical significance compared with sham or OVX. 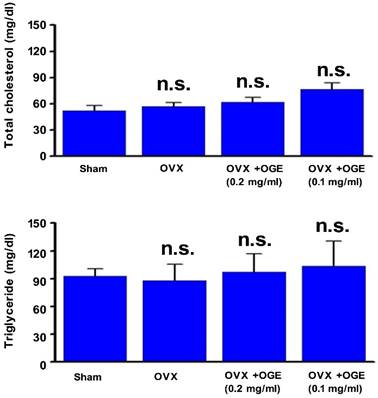 OGE supplement insignificantly affected blood lipids. Rats were sham-operated or OVX. OVX rats were divided in three groups; two groups were supplied with water containing OGE (0.1 and 0.2 mg/ml), and the other one received sterile water. After 12 weeks, sera were obtained for determination of calcium, phosphorus, and glucose levels. n.s.: no statistical significance compared with sham or OVX. 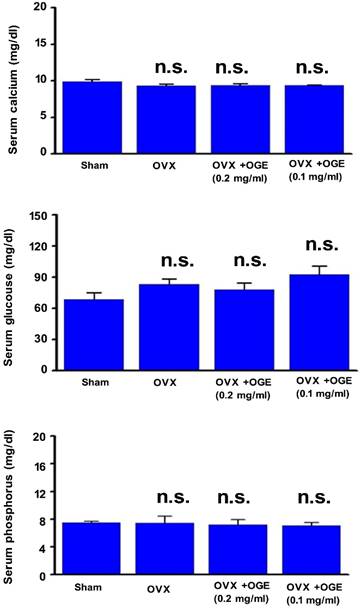 Both human (menopause) and rodent (reproductive senescence) studies indicated that age-related ovarian hormone loss contributes to changes in distribution of adipose tissues [32]. Significant decrease in estrogen and progesterone results from follicular depletion, yielding many androgenic patterns of fat distribution, that is, an increase in central or abdominal adiposity. Similarly, when consuming high-fat diet, male mice and OVX mice can obtain significant increase in body weight [33]. However, treating mice with estrogen results in reduced body weight.

With significant amount of simple phenols and flavonoids, including catachin and epicatechin [27], discovered in OGE and scientific evidence proving their beneficial anti-obesity effects [38], these compounds may potentially decrease weight gain in OVX rats. Future research should explore molecular mechanisms of such effects. Ovarian adipose tissue macrophages (adipose tissue macrophage clusters) and state of nuclear factor-κB activation should also be further explored to understand inflammation in estrogen-deficiency-related obesity and natural compounds for clinical use after menopause to achieve weight loss and to improve body figures of menopausal women.

This work was supported by grants from from the Ministry of Science and Technology, Republic of China (MOST 104-2320-B-039-032), as well as in part by Taiwan Ministry of Health and Welfare Clinical Trial and Research Center of Excellence (MOHW106-TDU-B-212-113004).