Background: To examine the influence of the severity of portal hemodynamic abnormality on the prognosis of cirrhosis with respect to the muscle mass loss (MML).

Conclusion: Lower HVPG has a compensating effect on the MML-induced poor prognosis of cirrhosis. Care should be taken in the evaluation of the influence of MML in consideration of the severity of portal hypertension.

Because of the increased prevalence of chronic liver disease, practical attention has been paid to the detection and diagnosis of cirrhosis [1]. This is the most advanced stage of liver disease, with a risk of developing various kinds of complications which may affect the prognosis of the disease as well as the quality of life [1, 2]. Clinical management of cirrhosis should be properly focused on the assessment of the severity of liver function and the prediction of long-term outcomes.

Muscle has a role to maintain energy metabolism and nutritional condition, and therefore the muscle mass loss (MML) may be a considerable impairment condition [3, 4]. Aging may increase the development of MML and further, cirrhosis is frequently associated with this muscular abnormality [5, 6]. Recent studies have shown the role of quantitative muscle assessment in cirrhosis, as a marker related to malnutrition and potential liver function [7], a prediction of post-operative outcomes [8, 9], and the prognosis for patients with cirrhosis or with hepatocellular carcinoma (HCC) [10-12].

Portal hemodynamics is another factor which shows prognostic influence on cirrhosis [13]. Investigators have reported the role of hepatic venous pressure gradient (HVPG), a surrogate marker of portal pressure, in the prediction of the risk of complications [14], development of HCC [15], and post-operative outcomes [16]. At the same time, portal flow appearance on Doppler ultrasound (US) may also represent the severity of portal hypertension [17, 18]. Recent studies have suggested the negative effect of decreased portal velocity in liver decompensation [19], and the risk of developing portal vein thrombosis [20].

This study is based on a subgroup analysis of the cohort which included prospectively enrolled subjects (April 2008 to March 2014, Number 2008-114) to examine the long-term outcomes in cirrhosis patients with portal hypertension. The study was approved by the ethical committee of our university hospital (Number 2015-73). Informed written consent was obtained from all participants.

The study enrolled the following patients:

i) Both inpatients and outpatients with cirrhosis whose diagnosis was made histologically or clinically by using US [21], which was performed for the surveillance of HCC, with laboratory data and clinical findings (varices or ascites).

ii) Patients who were scheduled to undergo hepatic venous catheterization for the detailed examination of portal hypertension because of the signs of gastroesophageal varices, moderate/severe ascites, and/or hepatic encephalopathy.

The computed tomography (CT) images which were taken for the routine surveillance of HCC were used for the evaluation of muscle mass volume and spleen volume. The latter was calculated by integrating all images for the spleen using image analysis software (HOPE/DrABLE-EX; Fujitsu, Tokyo, Japan) after manual tracing of an outline of the spleen in each slice at 5-mm intervals. In addition, Doppler US was performed on admission before performing angiography to evaluate portal hemodynamics.

The study excluded the following patients with:

ii) Malignant disease which was not controlled by non-surgical treatment

iii) Vascular abnormality detected by Doppler US, such as portal vein thrombosis, intrahepatic shunt, and non-forward flow direction in the portal trunk

iv) Vasoactive drug use such as a beta-blocker

vi) More than a 1-year interval between CT and HVPG measurement.

In addition, a patient was excluded from the study if Doppler US detected the presence of a paraumbilical vein, because of the shunt-related increase of portal venous flow [23], which may have a certain influence on the data analysis.

Gastroesophageal varices were classified according to the General Rules for Recording Endoscopic Findings set by the Japanese Research Society for Portal Hypertension as small, medium, and large grades [24].

The degree of ascites was defined according to the established guidelines [25]: mild for ascites that were only detectable by US examination, moderate for ascites that caused moderate symmetrical distention of the abdomen, and severe for ascites that caused marked abdominal distension. Portal vein thrombosis was defined as an echogenic structure that partially or completely occupied the lumen of the portal vein. Hepatic encephalopathy was assessed using the West-Haven grading system [26], and grade II or above was classified as overt hepatic encephalopathy.

MML was diagnosed by using axial CT images at the L3 level according to the literatures [27, 28]. The Slice Omatic V5.0 software (Tomovision, Montreal, Quebec, Canada) was applied to identify the skeletal muscle while excluding other tissues by using Hounsfield unit thresholds (-29 to +150) [28]. This automatic process provides the sum of cross-section areas of the skeletal muscle (cm2), followed by the calculation of skeletal muscle index (SMI) at L3 level (L3-SMI) by the formula of cross-sectional muscle area/height2. The cutoff values for diagnosing MML used in this study were 38 cm2/m2 for women and 42 cm2/m2 for men, which were recently proposed for Japanese [29].

Hepatic venous catheterization was performed according to the literature [30]. After the insertion of the balloon catheter (5 Fr, 9 mm; Terumo Clinical Supply Co. Ltd, Gifu, Japan) into the main branch of the right hepatic vein, free and wedged hepatic venous pressures were measured, and HVPG was calculated as the difference between the 2 pressures.

The US examination was performed in the supine position, after fasting for more than 4 hours, using an SSA-770A or SSA 790A (Toshiba, Tokyo, Japan) with a 3.75-MHz convex probe; the operator was one of the authors, H. M. who had more than 20 years of experience. All patients were asked to breathe gently.

The portal hemodynamics was evaluated by both pulsed and color Doppler US [31]. Firstly, color Doppler was performed to screen the presence or absence of hemodynamic abnormalities, such as reversed portal flow, portal vein thrombosis, intrahepatic arterioportal shunt or portal venous shunt, which are exclusion criteria from the study. Then, measurement of the diameter (mm) and pulsed Doppler were performed at the portal trunk. Basically, the blood flow was measured with an angle < 60° between the US beam and the vessel, and the mean velocity (cm/s) was calculated by the integration of the average time value obtained from the waveform of the Doppler signal. Mean values of multiple measurements (2 to 4 times) were used for the data analysis. The collateral vessels with hepatofugal flow direction were also reported.

All data are expressed as mean ± standard deviation or as percentages. When performing analysis, the cohort was divided into 2 groups based on the HVPG value of 12 mmHg which is the value to define severe portal hypertension [32, 33], or based on the portal trunk velocity of 12.8 cm/s according to the literature [19].

Patient characteristics with respect to HVPG

Clinical findings in patients with and without muscle mass loss

†: Sustained virologic response for hepatitis C virus or no detection of hepatitis B virus DNA

Impact of MML on disease prognosis with respect to portal hemodynamics 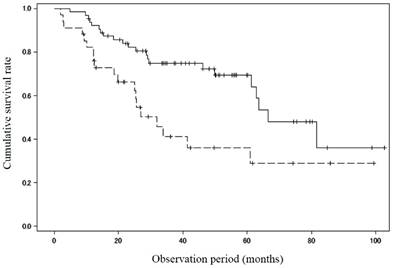 The present study focused on the influence of portal hemodynamics on the MML-induced prognosis in cirrhosis. Interestingly, there is a compensating effect of lower HVPG against the poor prognosis, which may be the first to report, to the best of our knowledge. In other words, a presence of MML may have less influence in patients who do not have advanced portal hypertension, which indicates the importance of a multifactorial assessment in cirrhosis. The reason for the compensation may be because of the potent role of portal pressure on the long-term outcome in cirrhosis. Recent studies have shown the effect of non-invasive tools which might replace HVPG measurement, for example, elastography, serum markers, and the evaluation of parameters by magnetic resonance imaging or contrast-enhanced US [34]. The combined application of these markers may be the next strategy for forming a prediction formula of prognosis together with the diagnosis of MML.

The study highlighted two portal factors, portal pressure and portal velocity, and the cut-off value (≤ 12.8 cm/s) for the latter was derived from the velocity to predict the decompensation [19]. The reason for less effective results may be that portal slow velocity is an indirect factor for the severity of portal hypertension, reflecting various hemodynamics abnormality, such as intra/extrahepatic collaterals, intrahepatic vascular resistance and splanchnic inflow. However, survival rate in patients with both MML and portal velocity ≤ 12.8 cm/s was 93.3% at 1 year and 13.9% at 3 years. Also, in patients with both MML and HVPG > 12 mmHg, the survival rate was 78.8% at 1 year, 40.6% at 3 years and 34.8% at 5 years. These data appear comparable to or worse than the data in patients with MML in the literature; 85% at 1year and 63% at 3 years [6], and 63% at 1 year and 51% at 3 years [35], probably due to the synergistic effect of MML and advanced portal hypertension presented by slow portal velocity and/or higher portal pressure. Meanwhile, there was no difference in the survival rate between patients with HVPG > 12 mmHg and those with HVPG ≤ 12 mmHg in our study. Zipprich et al reported that age and HVPG were independent predictors of death in compensated patients, but not in decompensated patients [36]. In addition, recent two studies have failed to detect HVPG as a significant prognostic factor [37, 38]. Therefore, the prognostic influence of the HVPG is under debate, and may depend on the other confounding factors such as patient condition, supporting our results.

Grading of cirrhosis may offer a classification of patients, leading to an individualized management plan to improve the quality of medical care [39]. In addition to the existing models such as the Child-Pugh classification, MELD/MELD-Na, and compensation/decompensation, D'amico et al reported in-depth grading by combining data from 2 large studies including 1649 patients; the classification of stage 1 to 4 according to liver compensation/decompensation and the presence of portal hypertension was correlated with prognosis [40]. However, considering the results of our study, it may be the time to include the presence or absence of MML in such grading systems, in addition to the factors of portal hypertension.

Positive effects by TIPS result in apparent benefits in cirrhosis patients due to the reduction of portal pressure. Various changes in body composition can appear after TIPS, such as an improvement in fat-free mass and fluid-free or ascites-free body weight, and muscle strength [41]. A recent study has shown that total psoas and paraspinal muscle area increased significantly after TIPS, from 22.8 ± 0.9 to 25.1 ± 0.9 cm and 54.5 ± 1.3 to 57.9 ± 1.5 cm, respectively [42]. In addition, failure to reverse MML after TIPS was accompanied by higher mortality (43.5%) compared with patients in whom the total muscle area increased (9.8%). These data may help to explain the potential link between portal hemodynamics and MML presented by our study. Moreover, as investigators have suggested the benefit of an earlier application of TIPS [43, 44], we should examine whether the early intervention might contribute to a suppression of the negative synergistic effect by MML in cirrhosis.

There are some limitations to our study. The major one is that the present study is not a prospectively designed study. Next, the study used Japanese cut-off value for diagnosing sarcopenia [29], which may be relatively lower than the value in the Western research [28]. In addition, the number of patients with alcohol-related liver disease may be fewer than in Western studies due to the culture of our country. Along with the relatively small sample size, these issues need to be validated in the additional international studies including larger patient population.

In conclusion, the study clearly demonstrated the compensating effect by lower HVPG on the poor prognosis caused by an impaired muscle condition in cirrhosis. Care should be taken in the evaluation of the influence of MML in consideration of the severity of portal hypertension.

25. Runyon BA. Introduction to the revised American Association for the Study of Liver Diseases Practice Guideline management of adult patients with ascites due to cirrhosis 2012. Hepatology. 2013;57:1651-1653