Background: Dermal fibroblast is a powerful tool for the study of ex vivo DNA delivery in development of both cell therapy and tissue engineering products. Using genetic modification, fibroblasts can be diversely adapted and made suitable for clinical gene therapy. In this study, we first compared several non-viral transfection methods including nucleofection in rat and human primary dermal fibroblast. In addition, the original protocol for nucleofection of primary mammalian fibroblasts was modified in order to achieve the highest possible transfection efficiency, as determined by flow cytometry analysis of the green fluorescent protein (GFP) expression.

In the last decade, the gene therapy has opened new possibilities in the management of chronic wounds [1-3]. Divergent virus-based methods for manipulation of cells were effectively used in several non-clinical studies [4-6] including at least one reported clinical trial [6]. However, the possible adverse effects due to integration of the virus as well as the long-term persistence of the virus-coded transgene expression are factors which significantly limit the wider use of such applications [7]. Thus, non-viral gene delivery technologies deliver an attractive alternative approach in genetic modification of target cells, and importantly, show the efficacy in wound healing and tissue regeneration [1, 8]

Cultured dermal fibroblasts are used to support the tissue repair process in a variety of wound etiologies. Moreover, dermal fibroblasts are ideal candidates for large scale cell-based gene therapy since they are easy to isolate, robust and grow fast ex vivo [9, 10]. Nucleofection, an electroporation-based transfection method, has proved to be a very efficient method for genetic modification of many hard to transfect cell types [8, 11-13]. Several studies demonstrated that with nucleofection the greatest transfection efficiency was achieved compared to other commonly used non-viral methods for transfection of several hard-to-transfect cells [14-16]. In our study, we tested several different non-viral transfection methods in rat and human dermal fibroblasts and compared it with a commercial nucleofection method. Moreover, our aim was to further optimise the electroporation-based method taking into consideration its potential use in Good Manufacturing Practice (GMP) compatible large- scale fibroblasts-based gene therapy. 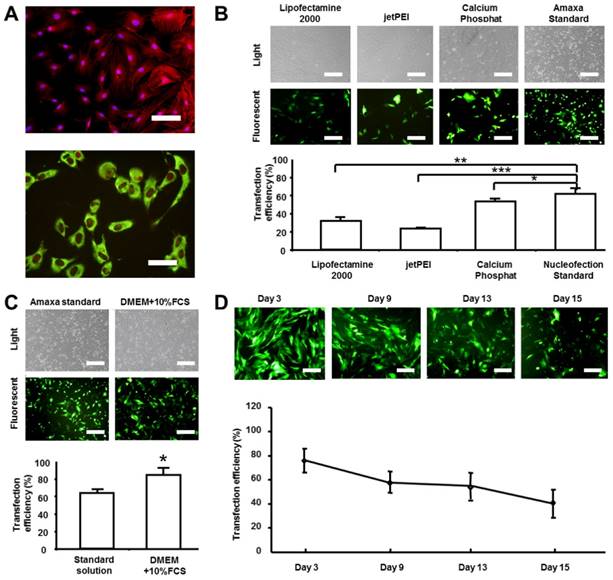 For rat dermal fibroblasts, rat skin samples were obtained from the back of Lewis inbred rats (weight 200-300 g, Charles River Laboratories, Germany) and cells were isolated as described before [17]. The study conforms the principles outlined in the Declaration of Helsinki and the Guiding Principles in the Care and Use of Animals and local animal protection regulations. Only the first 3 passages of the primary cells were used for experiments. The fibroblasts were cultivated in medium containing Dulbecco's Modified Eagle Medium (DMEM) + 10% Fetal Calf Serum (FCS) (further indicated as cell culture medium). Isolated fibroblasts were stained with phalloidin (Invitrogen, California, USA) and DAPI (4',6-diamidino-2-phenylindole; Invitrogen, California, USA) and the morphology was examined under the fluorescent microscope. The cells showed a typical spindle shape during the culture (Figure 1A upper panel: red fluorescence: Phalloidin; blue fluorescence: DAPI). Additionally, the cells were seeded on chamber slides for fibroblast characterization and stained with the antibody against beta subunit of prolyl-4-hydroxylase (P4Hβ: Acris, Herford, Germany). As shown in Figure 1A the cells were positive for this rat fibroblast marker (Figure 1A lower panel: green fluorescence: P4Hβ; red fluorescence: PI nuclear staining).

We found that DMEM supplemented with 10% FCS showed a better transfection performance (85.35%±11.56%) than the standard Nucleofector Kit (68.34%±10.32%, Figure 1C P<0.05). The expression of GFP in the rat dermal fibroblasts genetically modified according to an adapted protocol for nucleofection was persistent at a high rate even 15 days after the transfection (Figure 1D).

The next step was to adapt the protocol for the nucleofection of human primary dermal fibroblasts. For human dermal fibroblasts nucleofection, the cells were isolated from split skin obtained from human subjects by using the procedure described below. The human skin biopsies were obtained from patients undergoing operation at the Department of Plastic and Hand Surgery of Lübeck University (after receiving signed informed control which had been approved by the Clinical Ethical Committee of the University of Lübeck). The fibroblasts were cultivated in medium containing DMEM+10%FCS. Isolated fibroblasts were stained with phalloidin (Invitrogen, California, USA) and DAPI (4',6-diamidino-2-phenylindole, California, Invitrogen) and the morphology was examined under the fluorescent microscope. The cells showed a typical spindle shape during the culture (Figure 2A upper panel: red fluorescence: Phalloidin; blue fluorescence: DAPI). Furthermore, the primary fibroblasts were characterized by applying the cytospin technique and stained with the anti-Thy-1 antibody (Dianova, Hamburg, Germany). The cells exhibited positive staining for the Thy-1 human fibroblast surface marker (Figure 2A lower panel: green fluorescence: Thy-1; red fluorescence: PI nuclear staining).

Analysis of transfection efficiency of human dermal fibroblasts. Human fibroblasts were isolated from split skin, cultured (passage number did not exceed 3) and transfected with pmaxGFP plasmid. Transfection efficiency was analyzed by flow cytometry of GFP expression and was given as the percentage of GFP positive cells. A) Phenotypical characterization of human dermal fibroblasts. The cells were evaluated with phalloidin/DAPI staining (upper panel) as well as by staining with human fibroblast-specific antibody against Thy-1 and propidium iodide (lower panel). (B) Transfection efficiency of three transfection solutions was compared by measuring the GFP expression (lower panel). Images of fluorescent microscopy are given in the upper panel. C) Time-course of the percentage of GFP positive fibroblasts transfected by using the modified nucleofection protocol and ITS liquid media supplement (right panel). Images of fluorescent microscopy are given in the left panel. Scale bar represents 100 μm in A upper panel, 50 μm in lower panel and 200 μm in others. The results are depicted as mean ± SD, t-test: ***p<0.001. 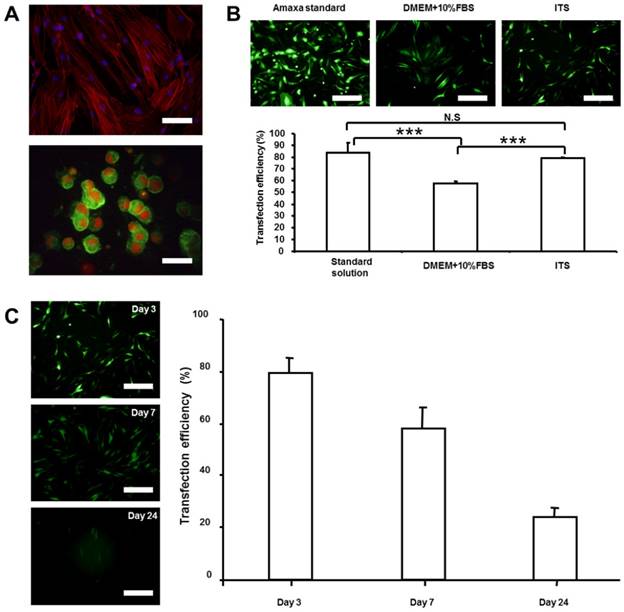 This study demonstrates a high efficiency of nucleofection technology as a useful tool for gene transfer of rat and human dermal fibroblasts. To our knowledge, the application of the modified nucleofection method described here yielded the highest transfection efficiency compared to other similar studies [15, 18, 19]. Thus, this optimized nucleofection technology for ex vivo gene delivery has a promising potential for clinical translation, in particular in skin-related health care [8, 17]. Adding growth factors in the form of plasmid DNA to the dermal fibroblasts could greatly improve wound repair process [20]. Moreover, from the perspective of drug development, the results presented here have notable impact on several safety and efficacy issues. Firstly, a high transfection rate of the cells ensures high expression of the therapeutic protein in transient but sustained manner. Local expression of the transgene will persist only as long as it is needed to promote wound healing [21]. Achieving the high level of therapeutic protein expression reduces the need for application of large number of genetically modified cells [22, 23]. Not only that the comparable efficacy could be obtained with less cells but also the higher level of safety. Secondly, the comparability of methods developed by using animal models and ex vivo systems and those intended for therapeutic applications in humans are of considerable importance from both safety and efficacy perspective [24]. In our institute, we have a Good Manufacturing Practice (GMP) facility for manipulating human cells in vitro and for biochemical manufacturing those cells. Our results confirmed the method transferability and we are currently working on the clinical transfer of such method. Finally, due to alternative components (nucleofection medium and cuvettes), the described method for transfection of dermal fibroblasts could significantly reduce the costs of manufacturing and is suitable for upscaling to clinical grade cell production.

In summary, the presented results suggest a promising application of the modified nucleofection method in therapeutic translational medical research.

This work was supported by grants from Innovations fund Schleswig-Holstein and University Hospital rechts der Isar, Technische Universität München to H-G Machens. Z. ZHANG was supported by a scholarship from the China Scholarship Council, a clinic research grant from Technische Universität München to Z. ZHANG (KKF. No. 8744556) and a grant to Z. Zhang from National Natural Science Foundation of China (Grant No. 81401538). The funders had no role in study design, data collection and analysis, decision to publish, or preparation of the manuscript. Dr. Ziyang Zhang would thank Frau Dr. med. Zhang for helpful personal advices. The authors have declared that no competing interests exist.