Pelvic inflammatory disease (PID) is an inflammatory and/or infectious disorder of the upper female genital tract, including the uterus, fallopian tubes, and adjacent pelvic structures, that may spread upward to the peritoneum. Currently available treatment options have presented to produce adverse effects of various degrees, such as increased antimicrobial resistance and a limited effective duration of hormones. In the study, the Cortex Phellodendri (CP) and Humulus japonicus (HJ) among natural compounds that are believed to present biological activities with fewer side effects were tested in a PID animal model. The results suggested that the administration CP and HJ reduced clinical signs, inflammatory cytokine expression as well as secretion in uterine tissue, and neutrophil infiltration into the tissue.

Traditionally, the Cortex Phellodendri and Humulus japonicus have been used to alleviate several symptoms, such as heat, dampness, and toxicity. Cortex Phellodendri (CP) is derived from the dried trunk bark of Phellodendron amurense Rupr. and contains a number of alkaloids (e.g., berberine, palmitine, and phellodendrine) that are known to exert multiple pharmacological effects [3]. The methanolic extract of CP has been shown to inhibit gene expression and the production of proinflammatory proteins in LPS-stimulated microglia [4] and to have neuroprotective and anti-inflammatory activities in a neuronal dysfunction model [5], although the underlying mechanisms remain unclear. Humulus japonicus (HJ), belonging to the Cannabaceae family is a perennial herb that commonly grows in Korea and China and is imported for ornamental purposes in Western countries [6]. Previous studies have indicated that the extract of HJ possesses potential anti-aging properties via antioxidative [6], antitumor [7-9], antituberculosis [9] and antibacterial effects [10, 11].

Pelvic inflammatory disease (PID) is an inflammatory and/or infectious disorder of the upper female genital tract, including the uterus, fallopian tubes, and adjacent pelvic structures, that may spread upward to the peritoneum [1, 2]. PID is one of the most serious complications of sexually transmitted diseases and the frequent uterine infections following abnormal parturitions in both women and animals, especially cows and horses. This disease directly causes economic losses because of resultant infertility, increased culling for failure to conceive, reduced production, and expenditures for drug treatments [12]. Although drugs, including antibiotics and hormones, are available for the treatment of PID, they produce adverse effects of various degrees, such as increased antimicrobial resistance and a limited effective duration of hormones [13]. Therefore, clinicians have turned to natural compounds that are believed to present biological activities with fewer side effects. Natural compounds, including oriental herbs, provide an immeasurable wealth of active molecules, and a great number of new drugs originated from these compounds [14]. The history of using medicinal herbs to ameliorate or treat numerous symptoms and diseases dates back thousands of years in various cultures [6]. In this study, CP and HJ, which are known to have anti-inflammatory activities, were selected to determine whether they could be viable treatment options for PID, using a previously established PID animal model [12]. To the best of our knowledge, the potential alleviating effects of these herbs on PID have not been studied. Therefore, the purpose of this study is to investigate whether CP or HJ regulates inflammatory responses to mitigate PID using clinical, biochemical and immunopathological evaluations.

Female C57BL/6J mice (8-10 weeks) weighing 20-22 g were purchased from Nara Biotech (Seoul, Korea), maintained under a 12:12-h light-dark cycle in a temperature and humidity controlled room (24 ± 5 °C; 50 ± 10 %) and fed a standard laboratory diet and water ad libitum. All experimental procedures were performed in accordance with the guidelines established by the Kangwon National University Institutional Animal Care and Use Committee (KW-160314-1).

Preparation of methanolic extracts of CP and HJ

Dried CP and HJ were purchased from A Healing Nature (Pyeongchang, Republic of Korea). The CP and HJ were air-dried, after which, 300 g of each sample was cut into small pieces and extracted twice with 3L of 80% methanol in a reflux condenser for 24 h. The CP and HJ extracts were filtered through Whatman No. 1 filter paper and concentrated using a rotary vacuum evaporator, yielding 70g (CP) and 51g (HJ). Finally, the CP (1 g) and HJ (1 g) extracts were each dissolved in saline (1 ml) for i.c. administration.

Animals were randomly distributed into 4 groups: Cortex Phellodendri supplemented and PID group [CP-PID], Humulus japonicus supplemented and PID group [HJ-PID], PID group for a positive control [PID] and mock-treated negative control group [(-) CTL]. Either CP (25 μl) or HJ (25 μl) extract was i.c. administered twice, once at 2 hours and once at 4 hours before PID was initially induced with HCl treatment, as described below.

To induce PID, as previously described [12], the animals were administered i.c. initially with HCl (1N), followed by four doses of LPS (50 mg/kg), one dose every 2 hours, starting 2 hours after HCl injection. In the PID groups, 100 μl of PMSG (7.5 IU per mouse) were administered 2 days before the experiment to induce proceptivity. Control mice received saline alone.

At 10 hours after initial inoculation, mice were sacrificed by incubation in a CO2 gas chamber at 2 L/min for 3 to 5 minutes followed by cervical dislocation, and then uterine tissue samples were collected.

The mice were monitored every 2 hours until the end of the experiment for clinical sign assessment according to the criteria shown in Table 1. The observers were blinded to the treatment status of the mice.

According to the previous study [12], the pro-inflammatory cytokines were determined from uterine mucosa. The protein extracts were isolated by homogenization of uterine tissue segments (50 mg tissue/mL) in 50 mmol/L Tris-HCl, pH 7.4, with 0.5 mmol/L dithiothreitol and 10 g/mL of a protease inhibitor cocktail (Sigma). Samples were centrifuged at 30,000 × g for 20 minutes and stored at -70 ºC until cytokine determination. Cytokine levels in the uterine tissue protein extracts were measured by specific sandwich enzyme-linked immunosorbent assays using capture/biotinylated detection antibodies for IL-1β and TNF-α from R&D Systems (Minneapolis, MN, USA) according to the manufacturer's recommendations.

As previously described [12], at the end of the experiment, all mice were humanely euthanized and their uteruses were excised. A portion was fixed in 10% (w/v) neutral buffered formalin for 24 to 48 hours, processed routinely and embedded in paraffin wax. Sections (4 μm) were stained with hematoxylin and eosin (H&E) for light microscopic examination. For the morphometric analysis of histopathological lesion score, three sections of each sample were randomly selected and six microscopic fields of each section were examined “blindly”, according to the criteria shown in Table 2 and the number of neutrophils per unit area (0.25 mm2) was determined. To obtain quantitative data, histological slides containing lesions were analyzed using the NIH Image J 1.43 m Program (http://rsb.info.nih.gov/ij).

Summary statistics were calculated for all of the groups to assess the overall quality of the data, including normality. Continuous data (cytokine levels) were analyzed with a one-way analysis of variance (ANOVA) followed by pairwise testing using Tukey's adjustment as a posthoc test. Discrete data (clinical evaluation and histopathological lesion score) were analyzed by Chi-square and/or Fisher's exact tests. A value of P < 0.05 was considered significant. 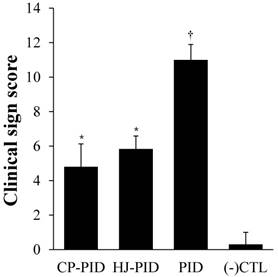 Uterine tissue lesions in the PID group were detected by the infiltration of neutrophils, epithelial cell necrosis and degeneration, and congestion and hemorrhage, as previously described [12]. In the treatment groups (the CP-PID and HJ-PID groups) with the natural compounds, slight histopathological lesions, including congestion-related edema and negligible infiltration of neutrophils were observed. 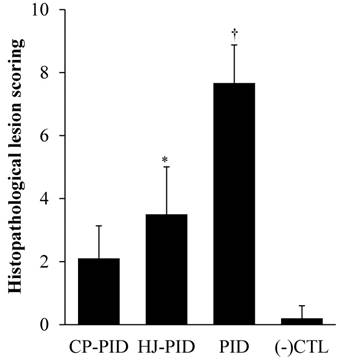 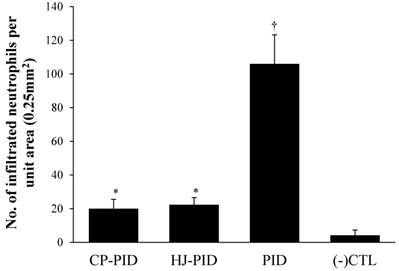 We studied effective alternative treatment options for PID by employing the medicinal herbs CP and HJ, which have been used for centuries in Chinese traditional medicine for the treatment of various inflammatory conditions, as well as various clinical problems. While the products used in this study have various anti-inflammatory and anti-oxidant effects, including anti-aging effects, it remains uncertain whether they are effective treatments for PID. PID involves serious complications of genital health status in both humans and animals, especially in domestic animals. Clinically, low abdominal pain is the main presenting symptom in women with PID, and the disease manifests in different ways, including endometritis, pelvic peritonitis, tubal abscess, and salpingitis [Yang et al., 2014]. Additionally, PID directly causes with economic losses because of resultant infertility, increased culling for failure to conceive, reduced production, and expenditures for drug treatments [12]. Treatment of PID focuses on the relief of acute symptoms, eradication of current infections, and minimization of the risk of long-term sequelae. These sequelae include chronic pelvic pain, ectopic pregnancy, and tubal factor infertility, among others [Romero et al., 2004]. Active interventions with remedies aid in the management of patients and improve compliance, but therapy with antibiotics alone is not enough successful [Liu et al., 2012] and includes the risk of antibiotic resistance and residual contamination of the environment.

There are no recommended alternative treatments for some forms of PID, and the use of antimicrobials has been documented with varied results. Moreover, when paromomycin, one of the chemotherapeutic agents used for infective PID, was administered intravaginally, vulval pain and mucosal ulceration, which may facilitate opportunistic infections, were reported [Dunne et al., 2003]. Natural substances or crude herbal medications exhibit many positive effects, including antimicrobial activity, in the veterinary field. Natural herbal supplements improved the growth rate, egg production and feed intake in layers, and gut microbiome and serum IgG in broilers (Hong et al., 2001; Ryu 1999; Woo 2007) and promoted the growth rate and serum immunoglobulin in pigs (Kwon 2003).

When the medicinal herbs CP or HJ were administered into mouse uteruses induced with PID, various inflammatory aspects of the animals were reduced, without any adverse clinical signs. The treatments alleviated clinical signs and reduced inflammatory cytokine expression in the uterine tissue. The CP-PID and HJ-PID groups secreted proinflammatory cytokines through uterine tissues significantly less than the non-treated PID group, and the results of the histopathological lesion scores strongly supported this result. Overall, the results suggest that the medicinal herbs CP and HJ are effective therapeutic options for PID, and to the authors' knowledge, this is the first report to describe CP and HJ as potential alternate therapeutic treatments for PID. In conclusion, regarding the PIDs as complicated diseases or symptoms, the results suggest that clinicians can use medicinal herbs as possible alternative therapeutic options, although additional studies concerning the active ingredients of the herbs, the mechanisms involved in reducing inflammation, and other factors of treatment are required.

This research was supported by the Bio-industry Technology Development Program (Grant No. 112130-3) funded by the Ministry for Food, Agriculture, Forestry and Fisheries of the Republic of Korea