Krüppel-like factors can bind to specific DNA motifs and regulate various cellular functions, such as metabolism, cell proliferation, and differentiation. Krüppel-like factor 6 (KLF6), a member of this family, is downregulated in human cancers. Oral cancer is a highly prevalent type in Taiwan. Although KLF6 overexpression in human cancer cells inhibits cell proliferation, induces apoptosis, and attenuates cell migration, the effects of KLF6 on oral cancer remains poorly elucidated. This study investigated the role of KLF6 in oral cancer tumorigenesis. Immunohistochemical staining revealed that nuclear KLF6 level was significantly and inversely associated with tumor size and stages. KLF6 overexpression attenuated the migration and invasion of oral cancer SAS cells. Zymography assay demonstrated that KLF6 inhibited the activities of matrix metalloproteinase 9 (MMP-9) and weakened the expression of mesenchymal markers, such as snail, slug, and vimentin. Our study is the first to provide demonstrate that KLF6 functions as a tumor suppressor gene and prevents the metastasis of oral cancer cells.

Oral squamous cell carcinoma is a common fatal malignancy in Taiwan and the leading cause of cancer-related death worldwide; this malignancy is characterized by specific etiologies, including tobacco product use, alcohol consumption, and human papillomavirus infection [11]. Decreased nuclear KLF4 expression is correlated with poor prognosis and high proliferative activity in oral cancer patients [12]. Although the role of KLF6 in head and neck cancer has been investigated [7], its function in oral cancer patients has yet to be elucidated. In this study, KLF6 was observed to function as an anti-metastasis protein in oral cancer by inhibiting migration and invasion through the downregulation of matrix metalloproteinase-9 (MMP-9). KLF6 also reversed epithelial-to-mesenchymal transition (EMT).

A total of 297 oral cancer samples were collected from patients who underwent surgical resection at the Department of Surgery, Changhua Christian Hospital. Tissue microarrays were constructed from paraffin blocks. The stages and grades were classified according to the TNM and World Health Organization classification systems. Immunohistochemical stain was performed using anti-KLF6 antibody. The intensity of nuclear staining of KLF6 protein was scored semi-quantitatively using scores according to the previously described. The staining intensity of the staining was scored ranging from 0 to 4. The intensity was classified as either weak (< 2) or strong (≧2). The histopathological and clinical data were obtained from the cancer registry of Changhua Christian Hospital. Disease-free survival was measured as the time interval between the surgical operation and either the date of death or the end of follow up. This research was approved by the internal review board of Changhua Christian Hospital.

Human oral cancer SAS cells were cultured in DMEM/F12 supplemented with 10% fetal bovine serum, 100 µg/ml of streptomycin and 100 U/ml of penicillin. The cells were kept at 37°C in a humidified incubator with 5% CO2.

Total Protein (50 μg) derived from SAS cells transfected with pEGFP alone or pEGFP-KLF6 was separated using 4-20% gradient polyacrylamide gel and then transferred into PVDF membranes. The membrane was blocked with phosphate-buffered saline (PBS) containing 5% nonfat milk for 1 h at room temperature and then the membrane was incubated with the indicated primary antibodies at 4 °C overnight. After washing with PBS containing 0.1% Tween-20 (PBST), membrane was reacted with HRP-conjugated secondary antibody and the reactive signal was detected using an enhanced chemiluminescence kit (Amersham Pharmacia Biotech, UK). The β-actin expression was used as the internal control.

SAS cells were tranfected with pEGFP or pEGFP-KLF6 and cultured in serum free medium. Twenty-four post-transfection, the conditional medium were collected and subjected into zymography assay. Samples were mixed with loading buffer and were separated by 8% SDS-polyacrylamide gel containing 0.1% gelatin. The gel was then washed twice in Zymography washing buffer (2.5% Triton X-100 in double distilled (H2O) at room temperature and then incubated at 37 °C for 12-16 h in Zymography reaction buffer (40 mM Tris-HCl (pH 8.0), 10 mM CaCl2, and 0.02% NaN3). The gel was stained with Coomassie blue R-250 (0.125% Coomassie blue R-250, 0.1%amino black, 50% methanol, and 10% acetic acid) for 1 h and destained with methanol/acetic acid/water (20/10/70, v/v/v).

Plasmids such as pLenti-C-mGFP and pLenti-C-mGFP-KLF6 were purchased from Origene. Virus particles were packaged according to the manufacturer's recommendation and infected into SAS cells. Twenty-four hour post-infection, cells were seeded at a density of 5 × 105/mL in the upper chamber of the 48-well Boyden chamber. The lower chamber contained 20% FBS. The chamber was incubated at 37 °C for 24 h. The cells that migrated to the lower surface of the membrane were fixed in methanol for 10 min and stained with 10% Giemsa for 1 h. The migrated cells were pictured at random five fields and counted. 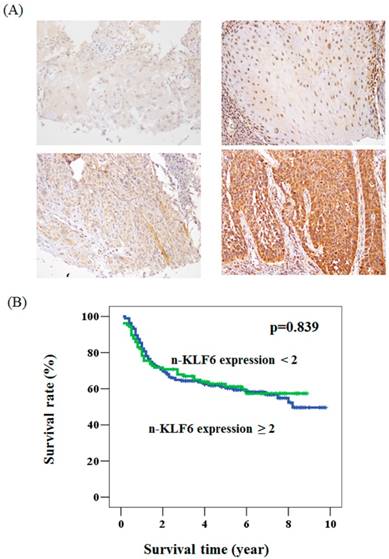 The correlation between the expression levels of KLF6 with different clinicopathological characteristics was measured by a Chi-square test with a Fisher extract test. The overall survival rate was estimated by a Kaplan-Meier plot and log-rank test. Multivariate analysis with a Cox proportional hazard regression model was used to evaluate the prognostic significance of clinical variables. The migration, invasion, and Western blot data are reported as mean ± SD of the independent experiments, and were evaluated by Student's t-test. A P value <0.05 was considered to be statistically significant.

KLF6 attenuated the (A) migration and (B) invasion of oral cancer cells and (C) suppressed MMP-9 activities. SAS cells were infected with pEGFP or pEGFP-KLF6 and subjected to migration (A) or invasion (B) assay. Conditional media derived from SAS cells transfected with pEGFP or pEGFP-KLF6 were subjected to zymography assay. MMP-2 and MMP-9 were indicated. Data represent mean ± S.D. * and ** denote P < 0.05 compared with cells expressing GFP alone. 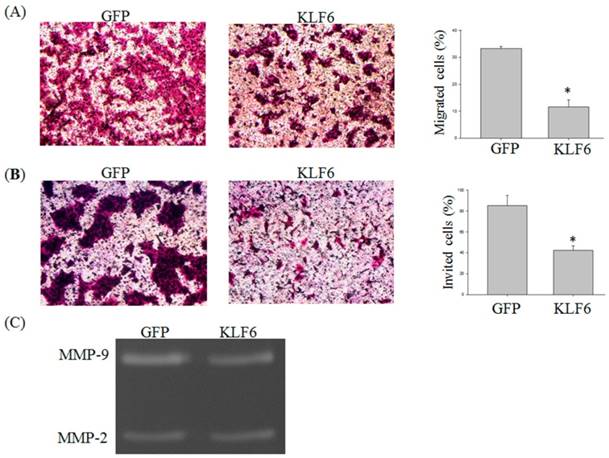 Matrix metalloproteinases (MMPs) play a critical role in cancer migration and invasion [14]. To determine whether the decreased MMP-9 expression also reduces MMP-9 activity, we conducted a zymography assay and found that KLF6 overexpression significantly decreased the MMP-9 activities. However, evident changes in MMP-2 activities were not found (Figure 2C).

The dysregulation of EMT is considered a hallmark of cancer metastasis [15]. To evaluate the effects of KLF6 on the expression of EMT markers, we performed Western blot analysis and observed that KLF6 decreased the expression levels of vimentin, snail, and slug to approximately 80%, 65%, and 70%, respectively, compared with cells overexpressing GFP alone. However, evident changes in E-cadherin were not found in SAS cells overexpressing GFP or KLF6 (Figure 3).

In this study, our observation indicated that KLF6 overexpression attenuated the migration and invasion of SAS cells. Zhang et al. revealed that microRNA-181-induced silencing of KLF6 expression promotes the proliferation, migration, and invasion of human gastric cancer SGC-7901 cells [18]. KLF6 overexpression in hepatocellular cancer cell lines decreases cell proliferation and migration [19]. MicroRNA-1301-stimulated KLF6 downregulation also triggers migration and angiogenesis through the reduction of KLF6 expression [20]. Ahronian et al. showed that KLF6 suppresses the expression of VAV3, a Rac1 activator, and subsequently inhibits the metastasis of hepatocellular carcinomas [13]. Micro-RNA-101 also prevents the expression of KLF6 and the proliferation, migration, and invasion in glioblastoma stem cells [21]. Therefore, KLF6 may function as a tumor suppressor gene in oral cancer to prevent migration.