EGF-like domain 6 (EGFL6), a member of the epidermal growth factor (EGF) repeat protein superfamily, is a secreted protein that promotes endothelial cell migration and angiogenesis. The current study investigated the association between the clinicopathological characteristics and plasma level of EGFL6 in patients with oral squamous cell carcinoma (OSCC). We measured the plasma EGFL6 levels of 392 OSCC patients by using a commercial enzyme-linked immunosorbent assay. We also analyzed EGFL6 mRNA levels of 328 OSCC patients from The Cancer Genome Atlas (TCGA) dataset. The results showed that plasma EGFL6 levels were significantly higher in patients with OSCC than in healthy controls (p < 0.001). Similar results were observed for the TCGA bioinformatics database. Moreover, plasma EGFL6 levels were significantly higher in the patients with advanced T status (p = 0.002), distant metastasis (p = 0.001), and higher TNM stage (p=0.033). In conclusion, our results suggest that plasma level of EGFL6 may be useful to assess disease progression, and especially advanced T status and higher TNM stage in patients with OSCC.

Both genetic and environmental factors contribute to the development of oral cancer, and major risk factors include the use of tobacco products, betel nut chewing, and alcohol consumption [1-3]. Approximately 90% of oral cancers are squamous cell carcinomas, and oral squamous cell carcinoma (OSCC) is the tenth most common cancer worldwide and the fourth most common cancer among men in Taiwan [4-6]. It is also the most common malignancy of the head and neck region, accounting for 2-4% of all cancer cases in Western countries and more than 10% in some areas of Asia [7, 8]. The 5-year relative survival rate of OSCC is unfavorable even with aggressive interventions, because invasion of the neighboring tissues and metastasis to the neck lymph nodes are common [9]. Identifying new biomarkers that can predict the risk of OSCC progression, especially local invasion and metastasis, are needed to improve the control of this deadly cancer.

Tumor invasion and metastasis are related to a series of complex processes, including cell adhesion, migration, invasion, angiogenesis, and anchorage-independent growth [10-15]. In addition, degradation of the extracellular matrix (ECM) giving cancer cells access to blood vessels and lymphatics is also a key process. The epidermal growth factor (EGF) repeat superfamily features a series of conserved cysteines and glycines positioned in a domain of 30 to 40 residues [16]. EGF-like proteins are characterized by their multiple EGF repeats [17]. EGF-like repeat family members are predominantly secreted as cell surface molecules, and are often involved in the regulation of the cell cycle, proliferation, and developmental processes [18, 19]. The binding of EGF-like proteins to their receptors triggers a wide range of biological functions, including proliferation, differentiation, apoptosis, adhesion, and migration [17]. EGF motif-containing molecules have been previously linked to the progression of various cancers [20, 21], and the expression of EGF-like domain 6 (EGFL6) in tumors suggests that it may also be linked to cancer [22-25].

The EGFL6 protein is a member of the EGF repeat superfamily which is secreted and then promotes endothelial cell migration and angiogenesis [26]. EGFL6 has been shown to be expressed in fetal tissues and pancreatic, lung, ovarian and breast tumors [20, 27-29]. In microarray-based detection and expression analysis of ECM proteins in drug-resistant ovarian cancer cell lines, the over-expression of EGFL6 has been observed in the WITR cell line [28]. Since EGFL6 is expressed specifically in certain tumors but not in normal adult tissues, the EGFL6 gene product represents a potential marker of malignancy [20]. However, the potential expression and role of EGFL6 in patients with OSCC have yet to be elucidated. In this study, we investigated the association between the clinicopathological characteristics and plasma level of EGFL6 in patients with OSCC.

We recruited 392 patients with OSCC (mean age 55.33±10.93 years) at Chung Shan Medical University Hospital in Taichung and Changhua Christian Hospital in Changhua, Taiwan between 2008 and 2015. OSCC were clinically staged at the time of diagnosis according to the TNM staging system of the American Joint Committee on Cancer (AJCC) Staging Manual, seventh edition. Medical information of the OSCC patients including TNM clinical staging, primary tumor size, lymph node involvement, and histological grade was obtained from their medical records. Whole blood samples were collected from the patients and placed in tubes containing ethylene diamine tetraacetic acid. After immediate centrifugation at 3000 rpm, the supernatants were stored at -80°C. Before conducting this study, approval from the Institutional Review Board of Chung Shan Medical University Hospital (CSMUH No: CS13214-1; CSMUH No: CS15150) and informed written consent to participate in the study were obtained from each patient.

The plasma EGFL6 concentration was determined quantitatively using an enzyme-linked immunosorbent assay (ELISA) according to the manufacturer's instructions (Human EGFL6 Immunoassay E01E0401; BlueGene Biotech, Shanghai, China). One hundred microliters of plasma sample (100-fold dilution), standard control sample and internal quality control were placed into microtiter plates coated with a monoclonal antibody against EGFL6 and incubated for 2 hours at room temperature on a horizontal orbital shaker at 200 rpm. The absorbance was measured at 450 nm by using a microtest plate spectrophotometer (BioTek Instruments, Vemont, USA). EGFL6 levels were quantified with a calibration curve using human EGFL6 as the standard.

Three hundred and ninety-two patients with OSCC were included in the analysis. Table 1 presents the demographic data, and shows that 88.3% of the patients were smokers, 51.5% consumed alcohol, and 78.3% chewed betel nuts. The TNM status and types of tumor cell differentiation of the patients are also shown in Table 1.

Correlation between plasma EGFL6 levels and clinicopathological characteristics of the patients

The mean plasma EGFL6 level was significantly higher in patients with OSCC than in controls (304.48 ± 194.55 pg/mL vs. 178.69 ± 102.96 pg/mL; p < 0.001) (Figure 1A). To verify our findings, TCGA OSCC database was used in this study. Samples filtered involved only six oral cancer subtypes (alveolar ridge, base of tongue, buccal mucosa, floor of mouth, oral cavity, oral tongue; filtered oral cancer dataset size: n = 328). The EGFL6 mRNA levels of OSCC and normal tissues were evaluated. Figure 1B shows the EGFL6 mRNA levels were also significantly higher in patients with OSCC tissues than in normal tissues (Figure 1B). Moreover, the EGFL6 expression was also significantly increased in cancer tissue compared with that in the normal parts in OSCC of the TCGA database (Figure 1C).

The advantage of using plasma tumor markers is that plasma can easily be obtained before treatment and at any time during follow-up without the necessity to invasively acquire tissue. It is clinically invaluable to have biomarkers which can provide information regarding the likelihood of a high TNM stage. This is particularly important in the context of patients with OSCC because their outcomes are closely related to disease progression and prognosis. Reliable tumor markers for these patients would therefore assist in assessing the prognosis and prediction of tumor behavior and in planning adequate therapy.

Correlation between plasma levels of EGFL6 and clinicopathological parameters in 392 OSCC patients.

EGFL6 levels were compared according to stage. The levels of EGFL6 were significantly higher in the patients with stage IV (332.83 pg/mL) compared to those with an early stage (stage I: 274.22 pg/mL). 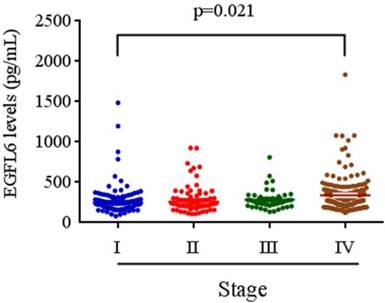 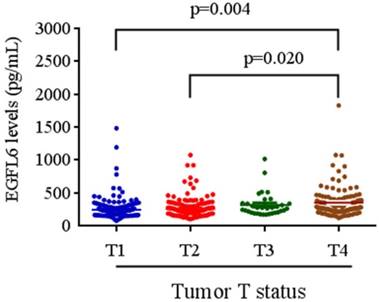 In this study, we investigated the levels of EGFL6 in 392 OSCC patients, and found that elevated plasma levels of EGFL6 were correlated with advanced T status, distant metastasis and high TNM stage. EGFL6 protein levels were significantly higher in patients with advanced T status (T3+T4; p = 0.002), distant metastasis (M1; p = 0.001), and higher TNM stage (stage III + stage IV; p=0.033). Previous reports have shown that tumor invasion and metastasis are related to cell adhesion, migration, invasion, angiogenesis, and anchorage-independent growth [10, 30-34]. In addition, the EGFL6 protein has been reported to induce cell migration and angiogenesis of endothelial cells [26, 35-38]. These findings may explain our results, and suggest that EGFL6 may promote OSCC tumor invasion and metastasis by promoting cell migration and angiogenesis. Our results also suggest that EGFL6 may play an important role in the carcinogenesis of OSCC.

Several EGF-like superfamily members have been identified, including EGFL2, EGFL3, EGFL5, EGFL6, EGFL7, EGFL8, and EGFL9. EGFL2, EGFL5 and EGFL9 contain transmembrane domains, however EGFL3, EGFL6, EGFL7and EGFL8 lack transmembrane domains and are secreted as proteins [26]. The EGFL6 gene maps to the human Xp22 chromosome and encodes a secreted protein containing multiple EGF repeat motifs, which is highly expressed in certain tumors and fetal tissues, suggesting a role as a growth factor [27, 39]. Using RNA in situ hybridization, the expression of EGFL6 has been detected in several sites, including all of the dermatome derivatives including the dermis of the trunk, hair follicles, and mesenchyme of the cranio-facial region [40].

In addition to oral cancer, the overexpression of plasma EGFL6 has been observed in several tumors including brain, lung, ovarian, and breast tumors, but generally not in normal adult tissues [27-29]. EGFL6 has also been proposed to be a new target for diagnostic and therapeutic interventions in patients with breast cancer, which shows promise for new areas of basic research in tumor biology [29]. Combined with our results, the plasma level of the EGFL6 protein appears to be a likely candidate biomarker for various human cancers.

To the best of our knowledge, this is the first report to examine the association between plasma EGFL6 level and clinicopathological characteristics for patients with OSCC with regards to the possible application of this molecule as a tumor marker. We suggest that EGFL6 may play an important role in the carcinogenesis of OSCC, and that this may have an important implication in the treatment of patients with OSCC. The detection of the EGFL6 protein in the plasma may serve as tumor marker to predict the likelihood of OSCC in patients without the disease.

In summary, we found that a substantial increase in the plasma level of EGFL6 by ELISA is useful to assess disease progression, especially in patients with OSCC with an advanced T status and higher TNM stage. As a secreted protein, EGFL6 may not only play an important role in the carcinogenesis of OSCC, but also find clinical applications as a biomarker for disease diagnosis and in planning therapy for patients with OSCC.