Background: Previous studies reported that patients who had an acute myocardial infarction (AMI) have found that measuring B-type natriuretic peptide (BNP) during the subacute phase of left ventricular (LV) remodeling can predict the possible course of LV remodeling. This study assessed the use of serial BNP serum levels combined with early creatine kinase-MB (CK-MB) to predict the development of significant LV remodeling in AMI patients.

Left ventricle (LV) remodeling is a complex pathologic process of progressive dilatation, leading to dysfunction and heart failure in patients having had an acute myocardial infarction (AMI). [1] Previous studies have shown B-type natriuretic peptide (BNP) levels can be used for prognostic purposes when measured in the subacute phase of LV remodeling in AMI patients. [2]

This study assessed value of serial measurements of BNP serum levels in predicting LV function. To do this, we performed a series of four blood samplings and echocardiographic studies over a six-month period in AMI patients undergoing revascularization.

The protocol for this study was approved by the ethics committee of the Chiayi Chang Gung Memorial Hospital, and written informed consent was obtained from each patient prior to participation in the study.

Study flow chart. Ninety-seven patients received 6-month echocardiography and were divided into 2 groups based on presence of LV remodeling (LVR) at 6-month follow-up. 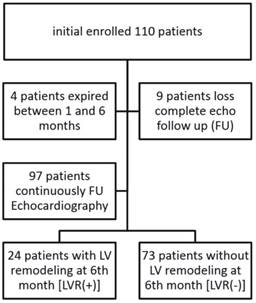 Once AMI was diagnosed, percutaneous coronary intervention (PCI) was completed as soon as possible. Patients were classified into two groups: one group with ST-segment elevation myocardial infarction (STEMI, defined as ST elevation >1 mm in 2 limb leads or >2 mm in leads V1-V6 or new left bundle branch block) and the other group with Non ST-segment elevation myocardial infarction (NSTEMI, defined as no ST-elevation on electrocardiogram (ECG) despite elevated troponin-I > 0.06 ng/ml). For STEMI patients, door-to-balloon time was reduced to less than 90 minutes. For NSTEMI patients, PCI was performed as soon as possible and the goal was to reduce door-to-balloon time to less than 48 hours. PCI was considered successful if the residual stenosis was < 30% and the flow in the involved vessel after the PCI was better than thrombolysis in myocardial infarction (TIMI) grade 2. All patients received dual antiplatelet therapy with a loading dose of aspirin 100 mg and clopidogrel 300 mg and a maintenance dose of aspirin 100 mg and clopidogrel 75 mg per day. When admitted, each patient was prescribed traditional heparin or low molecular weight heparin (enoxaprine) for 2 to 5 days. Heparin treatment was stopped depending upon PCI results and patient symptomatology.

All results were expressed as mean ± SD. Univariate analysis was performed using the Student's t-test. Categorical data were compared against a chi-squared distribution. Spearman's rank correlation coefficients were calculated in order to test the association between variables. Binary logistic regression analysis was used to determine independent variables for LV remodeling. The predictive value of parameters for detecting LV remodeling was assessed using receiver-operating characteristic (ROC) analysis, identifying the cut-point value that maximized sensitivity and specificity. Serial changes in BNP, LVEDV, and LVEF were calculated for the two groups and compared using repeated measures ANOVA. A P value < 0.05 was considered significant.

A total of 110 patients were initially enrolled. Four died before the 6-month echocardiography evaluation could be completed. Three of these patients had a cardiac death, one on day-38, another on day-92 and the other day-152. The fourth one had a non-cardiac death on day-79. Nine patients did no complete clinical follow-up. Thus, we were left with 97 patients who completed the half year study and received all clinical, laboratory, and echocardiographic assessments. Based on their 6-month echocardiographic findings, these patients were divided into either a LV remodeling group [LVR(+), n = 24] or a LV non-remodeling group [LVR(-), n = 73] (Fig. 1).

* One patient did not accept stent implantation at LVR(-) group.

In this study which aimed to identify independent predisposing factors that might predict half-year remodeling, we excluded the half-year exam or its related parameters ∆BNP14 and RBNP14. Prior to multivariate analysis, we studied the correlation between RBNP13 and other variables so that we could eliminate any strongly correlated factors that might mask predicting power of RBNP13. Table 4 shows the correlations between RBNP13 and other BNP variables. RBNP13 significantly correlated with BNP3, ∆BNP12, ∆BNP13 and RBNP12. Therefore, it was chosen over BNP1, BNP2, BNP3 and ∆BNP12 to test the ability of BNP to predict LV remodeling.

Table 6 showed the serial measurement of echocardiographic parameters including LVEDV, end-systolic volume (ESV) and EF. Because the cut-off value of two LV remodeling groups was defined by the serial change of LVEDV, the multivariate analysis did not include these parameters even with significant differences by independent T test. The different presentation of echocardiographic measurement was shown both on the table and following figures. Most patients had preserved EF (EF ≥ 40%) and only 3 patients had impaired EF (EF < 40%) at baseline measurement.

Results of multivariate analysis for half year left ventricle remodeling.

Serial measurements of echocardiographic parameters during half year.

Repeated-measures analyses of variance (ANOVA) were used to examine patterns of serial plasma B-type natriuretic peptide (BNP) change over the half year (Fig. 2). Pair comparisons revealed significant within-subject effects with regard to BNP 1 vs. BNP3 (P < 0.001) and BNP 1 vs. BNP4 (P < 0.001). In our comparison of BNP changes between the LVR(+) and LVR(-) groups, we found a significant difference at day 90 (P < 0.001) and day 180 (P =0.002), though we found no interaction and significant between-subjects effects (P = 0.105) among the members of these two groups. 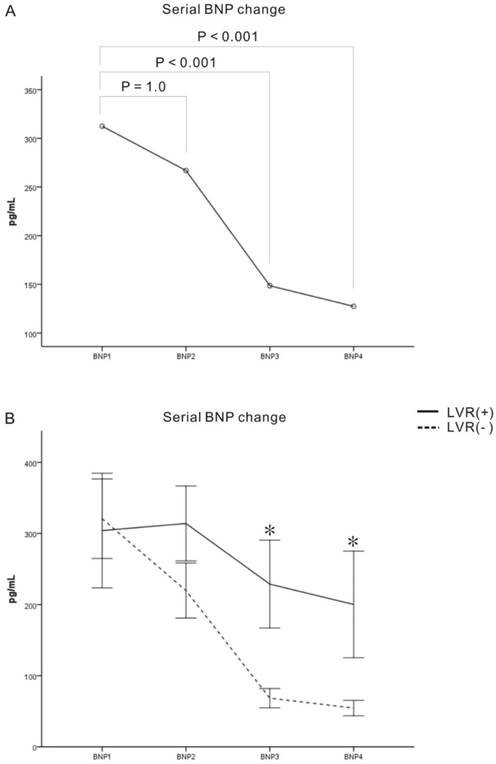 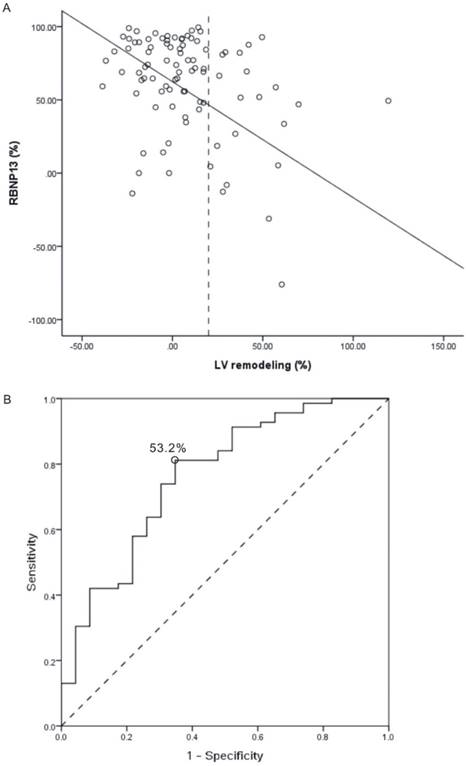 LVEDVs and LVEFs were calculated on the same days as that samples were taken for BNP measurements. Repeated-measures ANOVA revealed significant within-subject effects for EDV (EDV1 vs. EDV2, EDV1 vs. EDV3, and EDV1 vs. EDV4, all P<0.001) (Fig. 4A). The serial change in EDV significantly interacted with LV remodeling (Fig. 4B, P < 0.001), though we found no significant between-subject effect verification (Fig. 4B, P = 0.786). The LVR(+) group had a lower initial EDV and a higher half-year EDV than LVR(-) group (P < 0.001 and P = 0.001, respectively). 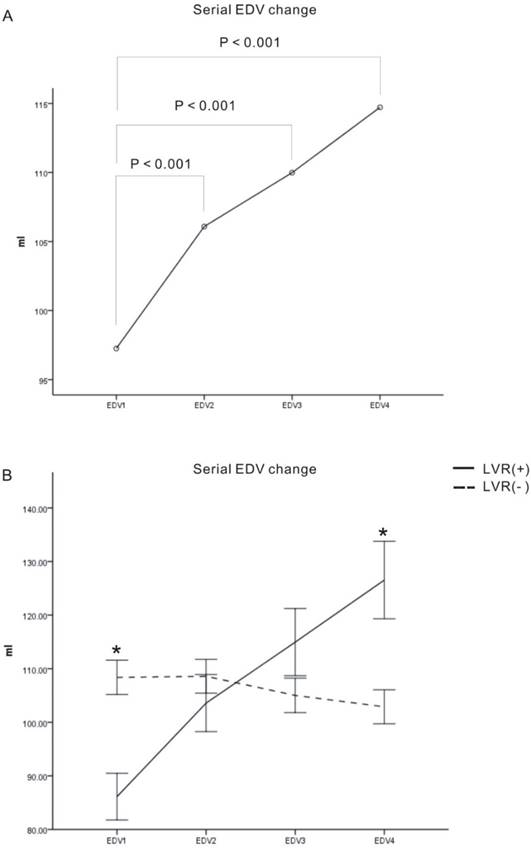 In an attempt to identify an early prognostic marker the first week after AMI, we performed multivariate analysis of age, D-to-B time, S-to-B time, target vessel stent type and peak CK-MB. Only the peak CK-MB time was found to be an independent predictor for half year LV remodeling (P = 0.015). The ROC method was used to determine the appropriate peak CK-MB cut-off point, which was 48.2 ng/ml (Fig. 6A: AUC = 0.672, P = 0.014). No other parameters were found to have a significant influence in our group comparisons.

This study discovered that the RBNP13 derived from serial BNP measurements can be used as an independent predictor for half year LV remodeling, supporting the use of serial BNP measurements for dynamic risk stratification for all AMI patients. It also found that peak CK-MB had incremental power to these predictions and thus should be routinely monitored in AMI patients.

Progressive ventricular dilation after acute myocardial infarction can be a main determinant of a patient's prognosis. While previous studies have suggested that early plasma BNP levels can predict short- and long-term prognosis of patients with AMI. [2-6], most of those studies have focused on the anterior wall MI, [3, 4] or studied this relationship in STEMI patients only. [2, 5, 6] 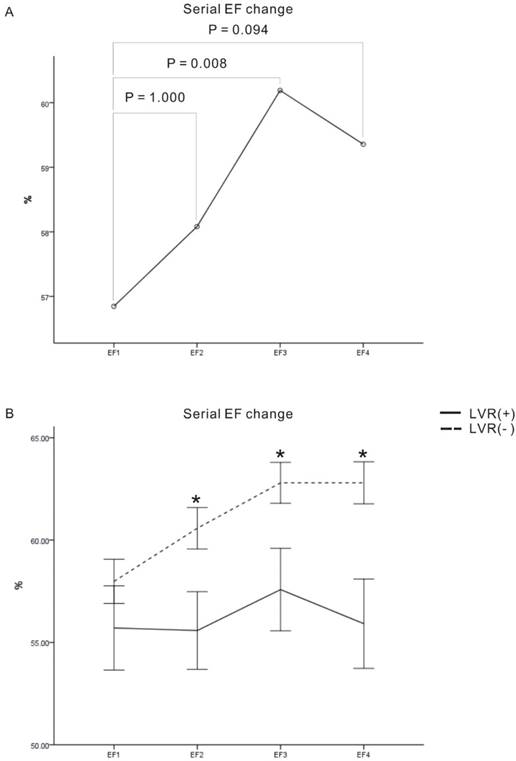 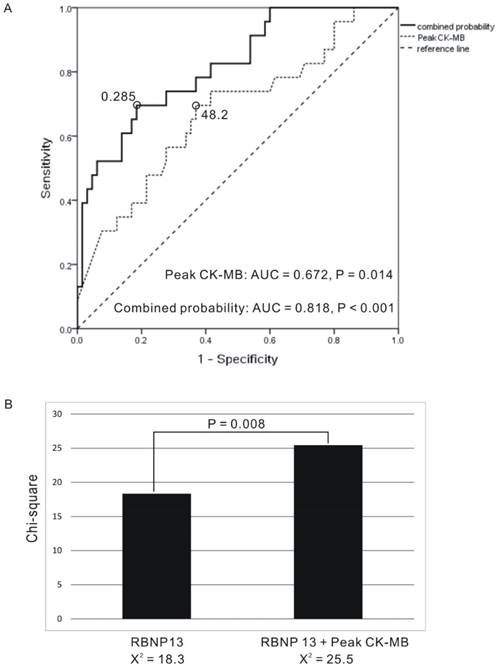 Studies using cardiac magnetic resonance imaging have reported peak CK-MB to be an independent predictor for infarct size, LV dysfunction and 1-year clinical outcomes. [10, 11], though one study in which all patients received primary coronary interventions found that peak CK-MB could independently predict LV remodeling. [12] The current study found that the peak CK-MB values could independently but not strongly predict half year LV remodeling. In our subgroup analysis, peak CK-MB was found to acceptably discriminate remodeling LV from non-remodeling LV in non-STEMI patients (P = 0.022) but not in STEMI patients (P = 0.142). However, this parameter enhanced the predictive power of serial BNP examination incrementally. The ROC curve of combined RBNP13 and peak CK-MB has excellent discrimination for half year remodeling.

Reduction in door-to-balloon time has been shown to be positive prognostic indicator. [13] Both animal studies [14] and clinical studies [15-17] suggest that shortening the duration of arterial occlusion caused by infarcts can reduce can infarct sizes and lower cardiac mortality. Time from symptom onset to reperfusion has been documented as an independent predictor of LV functional recovery. [17] However, although both door-to-balloon times and symptom-to-balloon times were significantly different between LVR(+) and LVR(-) group, there parameters were not found in our multivariate analysis to have independent significant predictive power for LV remodeling.

Our study has several limitations. Unlike previous studies [2, 5], we did not find that early first-week BNP concentrations (BNP1 and BNP2) to be prognostic indicators. This difference may have been due to the fact that all AMI patients of our study (including STEMI and NSTEMI) were analyzed together. In addition, our patient population was small (97 patients including both STEMI and NSTEMI patients) and thus it might not have been able to demonstrate prognostic significance in the early single BNP blood tests and the S-to-B time, both considered important initial parameters [2, 5, 16]. Another limitation is that, although 110 patients were initially enrolled in this study, nine of our patients died before the 6-month echocardiography evaluation and thus we could not determine predictors of mortality. Nighty-four patients had preserved EF (EF ≥ 40%) and only 3 patients had impaired EF (EF < 40%) at baseline measurement. It means that the study did not enrolled patient with severe heart failure and it could only offered the evidence for patients with EF more than 40%. Future studies with longer evaluation times and larger patient populations are, therefore, needed to demonstrate the effects of BNP levels, S-to-B times, and other parameters on mortality due to AMI.

In this study, after multivariate adjustment of clinical, laboratory, and angiographic variables, RBNP13 remained a significant independent predictor of 6-month LV remodeling (odds ratio = 0.967, P = 0.003). The appropriate cut-off value of RBNP13 was 53.2% (AUC = 0.764, P < 0.001). If the RBNP13 was less than 53.2%, the risk of half year LV remodeling increased. In contrast, the risk of half year remodeling decreased if the RBNP13 was more than 53.2%. It has high negative predictive value of 87.5% and moderate positive predictive value of 53.6%. The early peak CK-MB offered an incremental predictive power to serial BNP examination. By combing these two parameters, The ROC curve offered a good discrimination for half-year remodeling (AUC = 0.818, P < 0.001).

This study was supported by grant CMPG6A0141-43 from Chang Gung Memorial Hospital.