Oral cancer is the most common malignancy with poor prognosis and is the fourth most common cancer in men in Taiwan. The tissue inhibitor of metalloproteinase-3 (TIMP3) acts as a tumor suppressor gene by inhibiting the growth, angiogenesis, migration, and invasion of cancer cells. However, few studies have examined the association of plasma TIMP3 levels with oral squamous cell carcinoma (OSCC), and the role of plasma TIMP3 levels in OSCC progression is still unclear. We measured the plasma TIMP3 levels of 450 OSCC patients and 64 healthy controls by using a commercial enzyme-linked immunosorbent assay. We also analyzed TIMP3 mRNA levels of 328 OSCC patients and 32 normal tissues from The Cancer Genome Atlas (TCGA) dataset. Our results revealed that plasma TIMP3 levels were significantly lower in patients with OSCC than in healthy controls (p < 0.001). Moreover, plasma TIMP3 levels in patients with OSCC were significantly associated with the tumor stage and tumor status but not with the lymph node status, metastasis, and cell differentiation. To verify our findings, we also examined TCGA bioinformatics database and discovered similar results for the association with the pathological stage of OSCC. In conclusion, our results suggest that plasma TIMP3 is a potential biomarker for predicting the tumor stage and T status in patients with OSCC.

Oral cancer is the fourth most common malignancy in men and the sixth leading cause of cancer-related deaths in Taiwan [1]. Oral squamous cell carcinoma (OSCC) accounts for approximately 90% of oral cancers. Failure to control the primary cancer, poor prognosis, high recurrence rate, and lymph node metastasis are the main causes of death in patients with OSCC [2]. Therefore, various proteins from the tissue, serum, and saliva have been established as biomarkers to enable the early detection of OSCC progression. For example, the tumor protein p53, which regulates the cell cycle, is associated with overall survival [3]. Other proteins such as the vascular endothelial growth factor (VEGF)-A, VEGF-C, E-cadherin, focal adhesion kinases, metallothioneins, and matrix metalloproteinases (MMPs) are potential biomarkers for predicting the metastatic ability of oral cancer [4].

The tissue inhibitor metalloproteinase-3 (TIMP3) is a member of the TIMP family. TIMP3 has a broad metalloproteinase inhibitory ability against MMPs, a disintegrin and metalloproteinase (ADAM), and ADAM with thrombospondin domain (ADAM-TS) families [5, 6]. TIMP3 influences cancer progression, and TIMP3 deregulation has been reported in several cancers [7-10]. Bodnar et al. reported that TIMP3 expression was significantly correlated with lymph node metastases in the Laryngeal squamous cell carcinoma [10]. Furthermore, in patients with head and neck squamous cell carcinoma (HNSCC), TIMP3 hypermethylation is associated with a risk of second primary carcinoma [11]. Moreover, TIMP3 hypermethylation has been reported in approximately 90% of all clinical T1 and T2 OSCC cases [12]. Our previous study also reported that the TIMP3 polymorphism rs9862 is associated with large tumor size in OSCC [8]. In addition, high TIMP3 mRNA levels significantly reduced overall survival in patients with HNSCC [13]. However, few studies have examined plasma TIMP3 levels in patients with OSCC. In this study, we investigated plasma TIMP3 levels in patients with OSCC and evaluated the association of TIMP3 with OSCC progression.

We recruited 450 OSCC male patients (mean age 55.36 years) from Chung Shan Medical University Hospital in Taichung and Changhua Christian Hospital in Changhua, Taiwan between 2008 and 2014. Demographic characteristics and medical information of the OSCC patients, including tumor stage, tumor, node, and metastasis (TNM) status, and cell differentiation was obtained from their medical records. Patients with OSCC were clinically staged at the time of diagnosis according to the TNM staging system described in the seventh edition of the staging manual by the American Joint Committee on Cancer Staging Manual. All blood samples were collected from OSCC patients and placed in tubes containing EDTA. After immediate centrifugation at 3000 rpm, the supernatants were stored at -80 °C. This study was approved by the Institutional Review Board of Chung Shan Medical University Hospital (CSMUH No: CS13220), and informed written consent to participate in the study was obtained from each participant. Clinical characteristics of patients are summarized in Table 1.

The TIMP3 levels in the plasma samples were analyzed using a TIMP3 (MIG-5) Human ELISA Kit (Abcam, Cambridge, MA, USA). Briefly, 100 μL of prepared standards and diluted samples were added to the appropriate wells of an ELISA plate and incubated at 37 °C for 90 minutes, then 100 μL of 1X Biotinylated anti-human TIMP3 antibody was added into each well. After washing three times with 300 μL TBS, 100 μL of 1X Avidin-Biotin-Peroxidase Complex working solution was added to the wells. The wells were then washed again and filled with 90 μL of TMB color developing agent at 37 °C in the dark for 20 minutes. Finally, 100 μL of prepared TMB Stop Solution was added to each well and absorbance was measured at 450 nm by using a microtest plate spectrophotometer. TIMP3 levels were quantified with a calibration curve by using human TIMP3 as a standard.

Correlation between plasma TIMP3 levels and clinicopathological characteristics of patients

Correlation between plasma levels of TIMP-3 and clinicopathological parameters in 450 OSCC patients. 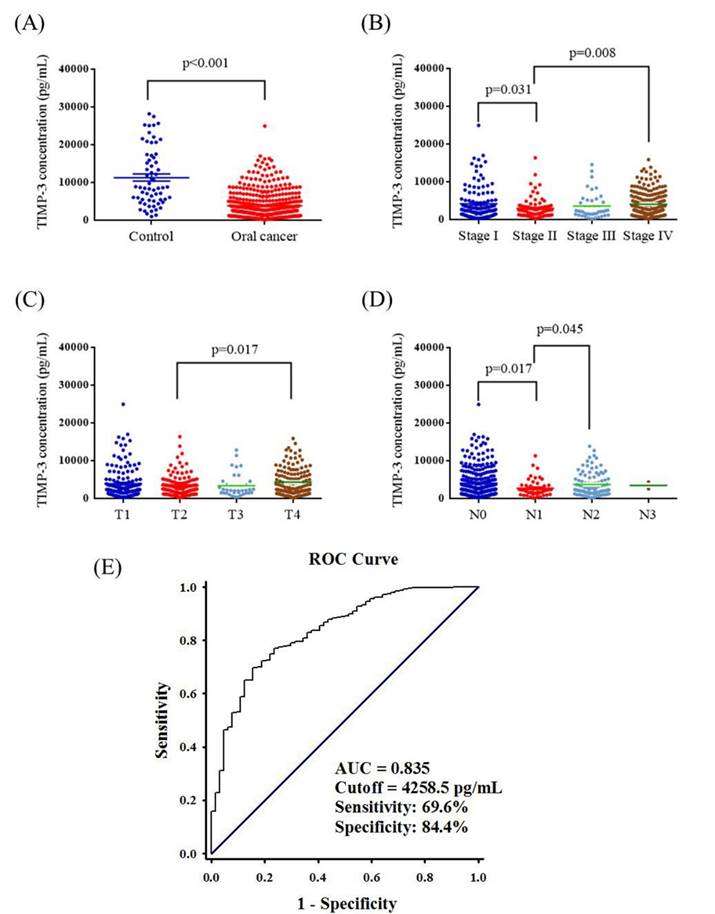 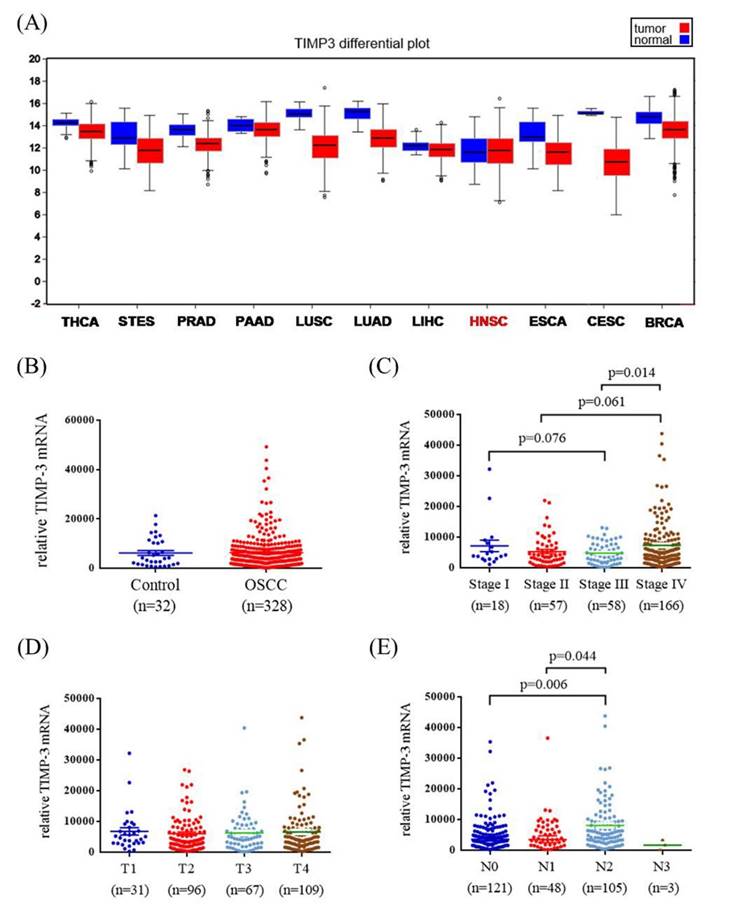 The disruption of the balance between MMPs and TIMPs may contribute to malignant behavior in carcinogenesis [14-16]. Although TIMPs are known for their anticancer properties, other roles have also been reported [17, 18]. For example, TIMP1 promotes cell proliferation of several cell types such as keratinocytes and fibroblasts [17, 18]. Unlike other TIMPs, TIMP3 has the ability to promote apoptosis through the stabilization of tumor necrosis factor receptors [19, 20]. Furthermore, TIMP3 exerts antiangiogenesis effects by blocking the binding of the VEGF to the VEGF receptor-2 [21]. Moreover, the restoration of TIMP3 in thyroid tumor cells increases cell adhesion ability [22]. In addition, Chen et al. reported that silencing of miR-221 could enhances the sensitivity of human OSCC cells to Adriamycin through upregulation of TIMP3 expression [23].

Different results of TIMP3 expression have been reported in different cancers [13, 24, 25]. Loss of TIMP3 expression in clear cell renal cell carcinoma was reported by Masson et al. [24] In addition, the downregulation of plasma TIMP3 in glioblastoma has been studied [25]. By contrast, Kornfeld et al. reported that TIMP3 mRNA levels were higher in the HNSCC stroma than in the stroma adjacent to the dysplastic or normal epithelia [13]. In our study, we observed that plasma TIMP3 levels were higher in healthy controls than in patients with OSCC. However, the results from TCGA database showed that TIMP3 mRNA levels were not significantly different in patients with OSCC tissue than in healthy controls. Additional studies with a high number of healthy controls are warranted.

Loss of TIMP3 in cancer may be due to genetic or epigenetic mechanisms. Genetic mechanisms include gene mutation, polymorphism, deletion, and copy number changes. Our previous data indicated that TIMP3 polymorphism rs9862 T/T carriers have significantly highly plasma levels of TIMP3 compared with C/C carriers [8]. Epigenetic mechanisms such as noncoding RNAs, histone modification, and DNA methylation can regulate gene expression without changing DNA sequence. In human gastric cancer cell lines, loss of TIMP3 protein expression is closely correlated with hypermethylation of TIMP3 in the region near the transcription start site [26]. Another study also revealed that TIMP3 protein expression was downregulated by miR-21 in human cholangiocarcinoma [27]. However, our data did not show the type of mechanisms that regulate TIMP3 plasma levels. In the future, we will further investigate mechanisms that regulate the loss of TIMP3 in OSCC patients.

OSCC may progress from an early stage to an advanced stage within a very short period, which hampers the early diagnosis of OSCC. Clinical specimens from tissues, saliva, and serum may facilitate the early detection of OSCC progression. For example, IL-6, which is correlated with the recurrence of OSCC can be detected in saliva [28]. However, some enzymes such as MMPs that were associated with tumor metastasis may not be detectable in saliva because of their low concentration [29]. Serum or plasma detection is also a useful method for discovering disease biomarkers because measuring biomarkers in blood is simple, convenient, and noninvasive [30, 31]. Therefore, many plasma proteins have been evaluated as potential biomarkers for predicting OSCC progression. For example, plasma lipocalin-2 (LCN2) levels and the LCN2/matrix metallopeptidase 9 complex were significantly correlated with large tumor size in patients with OSCC [32]. Moreover, Singh et al. indicated a positive correlation between plasma MMP-2, TIMP-1, and TIMP-2 levels and lymph node involvement, stage, and tumor differentiation [33]. In this study, we suggested that TIMP3 is a favorable biomarker for detecting the tumor stage and T status in patients with OSCC.

Our study possesses certain limitations that should be addressed. First, the sample size of healthy controls was inadequate. Second, TCGA database does not contain data regarding betel nut consumption in patients with OSCC; moreover, most of the data in TCGA is derived from Caucasian individuals. Third, we did not investigate the function of TIMP3 in vitro and in vivo. In our future work, we plan to recruit more healthy controls and patients with OSCC. Furthermore, we plan to transfect the TIMP3 overexpression vector into the OSCC cell line for evaluating the function of TIMP3 in cell proliferation and mobility. Moreover, the TIMP3-stable OSCC cell line will be injected directly into the anterior tongue of nude mice to confirm tumor growth, local invasion, and regional metastasis.

In summary, we observed that plasma TIMP3 levels were significantly associated with the tumor stage and T status in patients with OSCC. Plasma TIMP3 levels were downregulated in stage II and then increased in stage IV, and a similar tendency was observed for the T status. Plasma TIMP3, a secreted protein, plays a crucial role in carcinogenesis and may act as a potential biomarker for tumor progression in OSCC.

There are no conflicts of interest to declare.