Radiation therapy and cancer control in developing countries: Can we save more lives?

Globally, morbidity and mortality due to cancer are predicted to increase in both men and women in the coming decades. Furthermore, it is estimated that two thirds of these cancer-related deaths will occur in low-and middle-income countries (LMIC). In addition to morbidity and mortality, cancer also causes an enormous economic burden, especially in developing countries. There are several treatment and management options for cancer including chemotherapy, radiation therapy, surgery, and palliative care. Radiotherapy or radiation therapy (RT) can be an effective treatment, especially for localized or solid cancers; about half of cancer patients receive radiation as a curative or palliative treatment. Because of its low cost, for patients from LMIC with inoperable tumors, RT may be the only option. With the overall increase in the number of cancer patients especially in resource-starved LMIC, the need for more RT facilities further affects the economic growth of those countries. Therefore, an advanced molecular-targeted and more integrated approach involving either RT alone or with surgery and improved cancer drug access worldwide are urgent needs for cancer care.

The Burden of Cancer

Recent estimates from the World Health Organization predict that the global incidence of cancer will increase by ~65% from 14 million in 2012 to more than 22 million by 2030 [1], becoming a major public health problem in all regions of the world. Differences in cancer incidence and mortality rates have been noted in different regions of the world, with the highest rates occurring in low-and middle-income countries (LMIC). Each year, 5 million people die from cancer (10 percent of the 50 million deaths) in LMIC, which is second only to deaths from infectious diseases [2].

Based on human development index (HDI), worldwide total incidence and mortality due to cancer in 2012 is given in Table 1 [3]. HDI is measured based on income level, education and life expectancy which indicates the socio-economic status of the country [4]. Because cancer incidence increases with age, Bray and Møller predicted that the elderly will comprise 60% of cancer cases worldwide by 2050 and ~67% of those cases will occur in LMIC [5]. As the incidence of cancer increases concomitant with the aging of the world's population, the costs of diagnosis and treatment will become a burden to the world economy.

Worldwide total incidence and mortality from cancer in 2012 based on the Human Development Index (HDI) [3].

The various treatment modalities for cancer include chemotherapy, radiotherapy, immunetherapy, hormone therapy, surgery and palliative care [6-8]. Radiation therapy or radiotherapy (RT) is currently one of the most widely used treatment options for cancer around the world because of its low cost; approximately 50% of patients undergo radiation treatment during the course of their disease (6, 9). While RT is the cheapest treatment modality overall, comprising only about 5% of the total cost of patient care, limited sources are available in LMIC [10].

Although RT is a complex treatment, it can be effectively standardized and delivered to the majority of patients irrespective of their political/regional, socioeconomic, and cultural context [11-13]. Studies conducted in Australia, supported by the results of studies in Canada and Sweden, reported that for every 1000 newly diagnosed cancer cases, 523 patients (52%) required RT, and about 120 patients (23%) needed repeated radiation exposure to obtain a cure [7, 14]. However, an International Atomic Energy Agency (IAEA 2010) report suggested that in developing countries at least 60% of cancer patients require radiation treatment. Although 85% of world's population lives in LMIC, there are only 4,400 megavoltage radiation facilities available, which is far less than 35% of the world's RT facilities available in the other regions of the world [15]. Since that report, the number of available facilities in LMIC might have increased by a few hundred, but that has been without much impact.

Radiation therapy is used as a primary treatment for many cancers, also given as neo-adjuvant or adjuvant (before or after) with other types of treatments such as chemotherapy and surgery. Delaney et al [14] reported an ideal rate of RT utilization in Australian cancer patients based on the systematic search of published guidelines and literature. RT utilization rate is defined as the rate of cancer patients who will receive at least one course of radiation treatment during their lifetime. Based on the calculation, it has been indicated that 52% of cancer patients have to be treated by RT. Furthermore, cancers that show more than 50% of the ideal rate of RT utilization are breast, lung, prostate, urinary bladder, esophagus, stomach, pancreas, rectum, oral cavity, larynx, oropharynx, salivary gland, hypopharynx, paranasal sinuses, nasopharynx, unknown primary (head and neck), cervix, central nervous system and lymphoma. Comparison of these estimations with actual RT delivery rate suggest that some cancer types should be treated more by RT. Globally cancers are treated by radiation alone or with combination with other modalities effectively, but some cancers are not, because of few cancer cells that develop radiation resistant and cause a relapse. Furthermore, recently Ahmed et al [16] reported an intra-organ variation of the metastases treated by radiation based on the formation and location of the primary tumor. Therefore, attempts to combine radiotherapy with cellular and molecular targeted biological modalities which determine the sensitivity or resistance to ionizing radiation is an urgent unmet need.

The purpose of this article is to explain how RT affects cancer cells to enable general practitioners, non-specialist clinicians, and other healthcare workers to advise cancer patients who come to them with questions about how RT can be a treatment strategy to cure cancer.

In radiation biology, particles emitted when atoms decay are defined as low or high LET radiation. LET is a term used in dosimetry, which is defined as the energy released by radiation over a defined distance (expressed in keV/ μm). At the same level of observed dose, high LET radiation was shown to be more effective than low LET radiation for cancer treatment. For RT, radiation is delivered primarily as high energy sources like photons (gamma and X-rays), charged particles (electrons), and protons. The physical energy that is transferred to cancer cells alters their sensitivity, survival, and metabolism, and disrupts the tumor microenvironment (TME) [6, 20].

In external RT, high-energy rays (photons, protons or particle radiation) are delivered via a radiation beam from outside the body to the tumor. This is the most common approach, which offers a noninvasive alternative to surgery for vital organ preservation. To achieve cure, RT is delivered in multiple fractions based on the radiobiological nature of cancer and various normal tissues present in the path of radiation surrounding the cancer tissue. A typical RT fraction consists of daily (5days/week) exposure to 1.5 to 2 Gray (Gy) given over 5-7 weeks. In comparison to normal cells, most cancer cells proliferate rapidly; therefore, normal cells have time to repair the radiation damage before replication [6]. Over the past 2-3 decades, RT technology has advanced to deliver the radiation at a higher dose more accurately targeting the tumor and sparing the surrounding normal tissues. Multiple technological improvements in engineering and computing have advanced radiation delivery capabilities such as intensity-modulated radiotherapy (IMRT), image-guided radiotherapy (IGRT), stereotactic radiotherapy (SRT), and 3D-conformal radiotherapy (3D-CRT). Proton beam therapy (PBT) is a more recently developed technology that uses protons rather than photons (used in traditional external beam RT) to deliver the radiation dose. Although proton therapy minimizes the total radiation dose and side effects to the surrounding healthy normal tissues, there is limited clinical evidence that directly compares PBT with other types of photon-based RT approaches.

Cancer cells are resistant to anti-growth signals that prevent abnormal cell division. The main target of radiation in cells is the genome, i.e., DNA. Radiation acts as a physical agent that damages DNA directly or produces free radicals (charged particles) that damage the cellular DNA [21, 22]. Depending on the observed dose in the cell, DNA damage occurs as single-strand and double-strand DNA breaks, DNA base changes, and DNA-protein cross links [23, 24]. 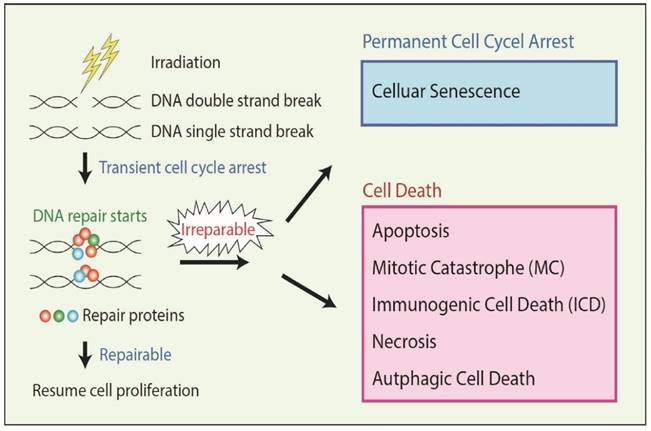 Apoptosis is a form of programmed cell death that represents a crucial mechanism to avoid accumulation of cells with DNA damage and mutations, and is a major cell death mechanism involved in RT-related cell death. In MC, cancer cells die with premature or inappropriate entry of cells into mitosis and aberrant chromosome segregation due to severe DNA damage by RT. DNA damage often induces MC in cancers which have defective cell cycle checkpoints and resistant to apoptosis [32]. In necrosis, damaged cells swell with the subsequent breakdown of the cell membrane and disintegration of cellular organelles. Although necrosis has been long considered as an accidental cell death, recent studies suggest that there are several genetically regulated form of necrosis. Severe DNA damage can induce regulated necrosis in Poly (ADP-ribose) polymerase 1 (PARP1)-dependent manner [32]. Autophagy is an important catabolic process in which the cell digests itself via degradation of intracellular components such as proteins and organelles. Although autophagy mainly contributes to cell survival, it can lead to Type II programmed cell death depending on the cell context. Several reports suggest that RT induces autophagy in cancers, and in certain conditions, autophagy-inducing agents can act as radiosensitizers [33]. Cancer cells that receive severe or irreparable DNA damage by RT undergo permanent cell cycle arrest called cellular senescence rather than cell death depending on the cell context. Senescent cells are still alive but not able to duplicate, therefore, it acts as an anti-cancer mechanism [34]. In ICD, instead of undergoing conventional forms of apoptosis, damaged cancer cells by RT emit a specific combination of signals that induce a cytotoxic T lymphocyte (CTL) response leading to cancer cell killing and also the killing of unirradiated tumor cells systemically [35]. Another mechanism is known as radiation-induced bystander cell killing, or abscopal response, in which non-irradiated cancer cells in proximity to irradiated cancer cells die via signals received from the damaged cancer cells.

The increase in the global aging population and related growing burden of cancer places increased pressure on health systems to provide comprehensive and effective cancer treatments. In recent years the improved treatment methods to control this disease have given hope to cancer patients. Furthermore, a number of potential improvements in treatment modalities that target cancer cell pro-survival molecular pathways show promise for sharply reducing the cancer burden not only in developed countries and also in LMIC. Fractionated RT has challenges for causing damage to normal cells as well as cancer cells, depending on the dose/method of delivery, and location of cancer in the tissue/organ. In addition to technological advancements, the explosion of older populations and increase in obesity and infections are driving intensive and sustained research efforts against cancer that will continue to be critical. Therefore, development of an advanced integrated approach involving RT, surgery, and drug treatment is urgently needed worldwide for reducing the burden of cancer.

This work was supported by the National Medical Research Council (BNIG11nov004) Singapore to RB and Duke-NUS core grant to KI.

The authors declare no conflicts of interest.

7. Ringborg U, Bergqvist D, Brorsson B. et al. The Swedish Council on Technology Assessment in Health Care (SBU) systematic overview of radiotherapy for cancer including a prospective survey of radiotherapy practice in Sweden 2001-summary and conclusions. Acta Oncol. 2003;42:357-65

17. Connell PP, Hellman S. Advances in radiotherapy and implications for the next century: a historical perspective. Cancer Res. 2009;69:383-92